Authors: All a Woman Wants 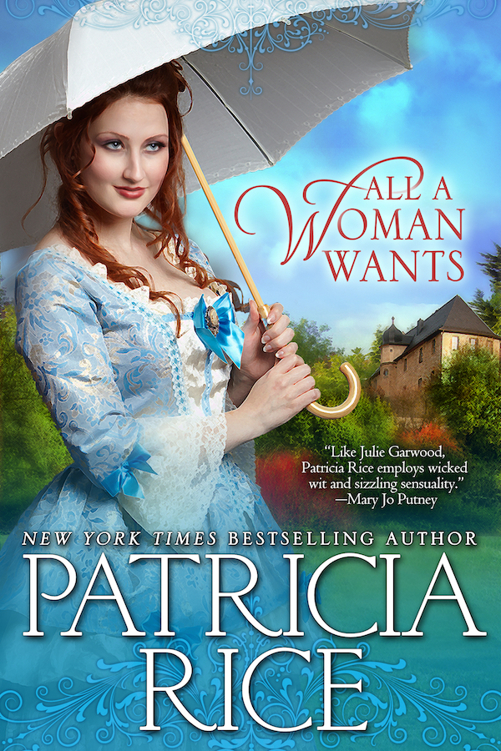 All a Woman Wants

For Ellen, who endures a writer’s neuroses with
grace and patience, and succeeds where others would have smashed
pumpkins (or other crushable matter!).

And as always, to Mary Jo and Connie and everyone
else who has listened to screams of frustration and made sense out of
the incomprehensible, you’re my sanity. Thank you.

And forever, to my husband and children, for you are my heart, and I love you.

“Not that way, ye keelhaulin’ son of a sea serpent!”
Lachlan Warwick MacTavish shouted, jumping to the dock ramp to grasp
the rigging on a crate of cotton in danger of a watery fall. Holding the
heavy crate in position, he waited while one of the crew hastened to
right the ropes and swing it to a safer landing.

Below, his father’s new London business agent
appeared mildly startled by Mac’s sudden, ungentlemanly leap into
action. The man drew the frill-bedecked maiden who stood at his side to a
more appropriate distance while she covered her ears with gloved hands
to avert any further depredations on her delicate sensibilities.

Swearing beneath his breath, Mac shifted the heavy
crate to show the inexperienced cargo man the ropes, yelled at his first
mate to keep a closer watch on the unloading, and, stretching his
muscles against the unusual restraint of a coat, grudgingly returned to
the elegant pair waiting out of harm’s way.

Gulls screeched, men cursed in the rigging as they
brought down a storm-battered sail, and Mac thought he would far prefer
being on his ship than here, discussing pleasantries with a money
counter and his fashionable daughter. He had no use for ladies, and they
had no use for him once they had his measure.

That seldom took long. This one already wore the
look of distaste he generally encountered on feminine features. He’d
never quite managed the languid, fastidious elegance of a gentleman.

The delicate lady in her many petticoats edged away
from his overlarge presence. Impatiently, Mac balled his fists and
ignored her, leaning down to hear the prattle of his father’s agent as
they traversed the dock toward the safety of the street.

His mind, though, took flight to a dock not far from
this one, a dock at a shipyard boasting a spanking-new clipper with
masts raised, fittings and final coats of paint ready for installation
at the new master’s command. His command. Finally.

“Your father says you have a canny head on your shoulders when you’re inclined to use it,” the agent was saying.

“Aye, well, we have a wee bit of disagreement on
those uses from time to time.” With iron determination, Mac tempered his
impatience to see the ship he’d commissioned. He had a dozen duties
ahead, and one was humoring this old man. He needed all the goodwill he
could summon to obtain the agent’s aid in stocking the new vessel Mac
would be sailing home.

“Well, you’ve brought me a fine shipment, from all reports. Have you a list of goods you’ll be wanting to take back?”

“And I’d be a fool not to, wouldn’t I?” Eyeing the
fine horse waiting for him at the curb, Mac paid no heed to the female
swaying beside him. Women—ladies, at least—weren’t on his current list
of priorities.

Later, when he had time, he would divert his restlessness with the company of a tavern wench.

This time next year, it would be his own ship cutting across the ocean, carrying profits to his
own
bank account, rather than his father’s. It was all very well and good
to know he’d someday inherit his father’s wealth, but not if the wealth
depended on an enterprise that was expiring of old age and moribund
thinking. His father couldn’t see that the future of shipping lay in
speed.

“You say your sister’s here in London?” Cunningham
inquired congenially, satisfied that he was dealing with a sensible
businessman. “I’d thought you Americans stayed to the other side of the
pond.”

“We’ve family up and down the coast on two
continents. Safer than keeping all our eggs in one basket.” Mac didn’t
mention that far from being a close-knit family, they were a
closemouthed, stubborn, cantankerous lot on the whole. The MacTavishes
thought the Warwicks, the maternal side of his family, were a lot of
foppish ne’er-do-wells; the Warwicks thought their Scots relations by
marriage were mere shopkeepers. And their American relations—well,
they’d never been forgiven for the Revolution.

He didn’t intend to call on any of them except his
sister. Eight years his junior, she’d followed him like a little lamb
through childhood, tormenting him in front of his friends, making him
laugh like a simpleton in private. He adored the little brat, when she
didn’t annoy the devil out of him.

As Cunningham and his daughter climbed into their
carriage. Mac offered his hand to his father’s agent. “It will be a
pleasure working with you, sir. Shall we meet tomorrow to discuss
purchasing?”

The lady nodded stiffly and looked away. She had no
doubt come hoping for an aristocratic, wealthy gentleman. She’d found an
uncouth, bulky American instead. Accustomed to the reaction, Mac waited
to be rid of the pair. He needed to get back to the unloading, try to
clean himself up again, and then make his way to Marilee’s London town
house.

Mac turned and strode back to the dock, shouting a
curse at one of the men lollygagging in the rigging. The idea of joining
Marilee and her viscount husband for a stilted evening of polite
conversation galled him, but family came first.

From the back of his restive mount, Mac eyed the
impressive edifice of the viscount’s London home with disfavor. No
lights lit the upper-story windows. He’d sent word of his arrival, but
the family didn’t seem to be at home.

Annoyed that he’d donned a fresh dress coat for
nothing, Mac easily held the tossing head of his nervous horse while
contemplating his next move. He could leave his card—no, he’d burned
them one cold night in a fit of drunken amusement. Well, hell, he’d
leave his name with a servant. They’d know to look for him at the docks.

Not being a worrier by nature, Mac hadn’t thought
anything of his sister’s lack of communication until his parents had
pointed it out before he’d set sail. They’d never forgive him if he
didn’t at least attempt to check on her. He might love his sister, but
at times she could be a damned nuisance, like most women.

Muttering about thoughtless chits with nothing in
their heads but fripperies and fashion, Mac tied the horse to a post and
took the front stairs two at a time, already feeling confined by the
city’s tall buildings and narrow streets.

He wasn’t built for the boundaries of city life. He
needed the ocean around him, or perhaps the grand prairies of the West.
Once he had his fortune securely in hand he could explore the
possibilities.

His thoughts drifting to the fortunes to be made
should railroads ever cut across the American continent, he sounded the
door knocker and waited.

A piercing childish scream shattered his
complacence. Frowning, he glanced around, seeking the source of the
racket. It sounded more like fury than terror. Since he had no offspring
and didn’t spend time around anyone else’s, he couldn’t be certain.

The door stayed firmly closed in his face.

Damn and blast it, where were the servants?

The scream shrieked again from overhead. He glanced
upward at the windows opened to the warm May evening, although the
oppressive stench of coal, horses, and raw sewage that permeated even
this fashionable part of London couldn’t precisely be called fresh. A
child’s sobs blended with the shriek, clamoring over the outside noises
of clopping horses and the cries of a distant fishmonger.

If Marilee couldn’t control her children any better
than that, then the servants probably rode roughshod over her as well.
Where the devil was her husband? He couldn’t expect a gentle soul like
Marilee to manage a full household of servants on her own.

Turning the knob and finding the door unbolted, Mac
simply strode in. Nervous energy surged through him, but he wouldn’t
release it by bellowing at the staff. Just because he was large enough
to charge through these civilized halls like a raging bull didn’t mean
he had any need to do it. Moderation, patience, and methodical planning
were much better substitutes for irrational emotion. He’d learned his
lesson the hard way: sitting in one too many jail cells after a brawl.

Since no one noticed his entrance, he laid his tall beaver hat on the hall table and followed the screams.

He’d had temper tantrums in his youth, but he didn’t think they’d been allowed to reach this scale.

Taking the stairs two at a time, he heard the murmur
of voices as he reached the third-floor landing. No one appeared to
greet or question him, and Mac fought a surge of irritation. Marilee was
obviously not at home, and the servants were shirking their duties. He
would sack them all if they were his.

A babe’s wails joined the screams of outrage,
growing louder as he approached a closed door at the back of the hall.
Even the babe seemed to be having a tantrum. Why the devil did anyone
want children anyway? Screaming nuisances, the lot of them.

Turning the key still in the lock and opening the
door, he would have entered, but a grubby gremlin shot through the
doorway and bounced off his knee before fleeing down the corridor.
Before the mite scrambled down the banister and slid out of view, Mac
judged the escapee to be a half-naked little savage with overlong dirty
curls of an indeterminate color.

Astonished, he sought the source of the continuing
wails. A naked babe sat in the middle of what could politely be termed a
potty accident. At his appearance, her wails diminished to a hiccup and
a sob as she regarded him hopefully. Wrinkling his nose at the stench,
Mac stared into trusting blue eyes beneath a mop of golden curls, and
his heart cracked open.

Patience, he reminded himself firmly. Logic. Control. There must be nursemaids to handle this matter.

Not daring to touch so frail a creature as the tiny
babe with his big, clumsy hands, Mac backed out—and bumped into a solid,
indignant virago.

“And what the devil do you be doin’, I ask? This be no place for gen’men. Be you some kind of pervert? Out with ye!”

Though she easily carried two hundred pounds of
fat—half in her jowls, Mac calculated—she didn’t budge him any farther
than he cared to be budged.

Calmly balling his fingers into fists instead of
grabbing the front of her filthy apron, he scowled down at her. “Where
are the nursemaids? And when will Lady Simmons return?”

“A lot ye know,” the woman spat. “And hasn’t the lady been dead near this year and you just askin’? Hmph.”

Shocked into immobility, Mac remained blocking the door as she tried to shove past him and enter the nursery.

A nasty lump stuck in his throat, paralyzing his
ability to speak. Striving for control before he broke into
grief-stricken sobs like those coming from behind him, he choked.

Marilee couldn’t be dead. Not the sweet, sunny
sister who sang through his childhood. She was too vivid, too alive. The
hag had to be referring to a different Lady Simmons.

A neat maid wearing a clean apron and a worried
expression appeared on the back stairs, towing the half-naked demon
who’d raced past him a moment ago. Mac determinedly fought back the
moisture in his eyes to grasp the moment.