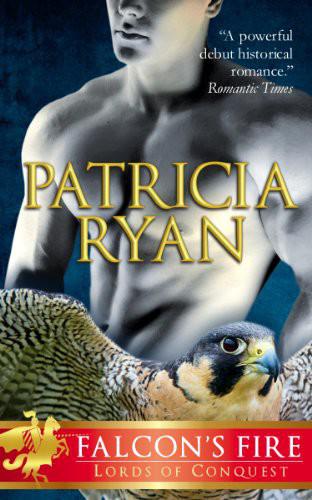 Copyright © 1995 Patricia Ryan. All rights reserved. With the exception of quotes used in reviews, this book may not be reproduced or used in whole or in part by any means existing without written permission from the author.

To my sister, Pamela Burford, with love and gratitude

for helping to give birth to this story

...For nothing is less under our control than the heart—having no power to command it we are forced to obey.

—Héloïse, in a letter to Abelard

Martine of Rouen watched the seagull soar out of the dawn sky from across the Channel. It flew over the vessels in the Fécamp harbor for some time, as if trying to pick out one from the rest. Finally, its choice made, it descended in a graceful spiral to alight next to her on the railing of the
Lady’s Slipper
as thirty oarsmen propelled the merchant longship smoothly out of her dock.

“‘Tis a good omen, milady,” the ship’s pilot said, and smiled. “A blessing on your marriage to Baron Godfrey’s son.” He was a massive Englishman, nearly toothless. His face formed a landscape of boils; his French was spoken with an unpleasant, guttural accent.

Martine had not believed in omens since the age of ten, particularly good ones. Why fool oneself into expecting the best, when logic foretold the worst? This journey to England, a place she had never been, to marry Edmond of Harford, a man she had never met, filled her with a dread that no omen could erase.

Sensing her brother’s comforting presence behind her, she turned to look up at him.

Rainulf met her eyes with a reassuring look, then returned the Englishman’s smile. “A good omen? And why would that be?”

The pilot pointed to their small visitor on the railing beside Martine. “That gull be an English herring gull, Father—er, milord.” He frowned, his mouth agape. Martine knew he pondered the correct form of address for someone who was not only a priest and the son of a Norman baron, but a relation of Queen Eleanor herself.

“‘Father’ is fine,” Rainulf said. “My fealty to my God supersedes even that to my cousin.” He nodded toward the bird. “So you think our little friend here has flown all the way from England just for us?”

“Aye, milord.
Father
. ‘Tis a lucky sign for milady.” He grinned at Martine. “That wee creature flew a great distance and come straight to you, milady, to escort you across the Channel to young Edmond of Harford. If you feed him crumbs, he’ll most likely stay with us till we dock at Bulverhythe Harbor tomorrow. And then it’s certain your marriage will be a union of love, and your sons many.”

A union of love?
Martine shuddered at the thought. As a child, she had watched her mother’s union of love claim her will, her reason, and finally her life. In a choice between marriage and the convent, Martine had consented to marry, but she hadn’t consented to love. Nor would she ever, omen or no omen.

The pilot stared at her, waiting for some sort of response.
Do all Englishmen share your primitive ideas?
she wanted to say.
If Sir Edmond does, I’ll hardly need a gull to predict how miserable my marriage will be.
That’s what she
wanted
to say, because fear unleashed in her a reckless temper. But this Englishman, despite his coarseness and his childish superstitions, clearly meant no harm. For that reason, and because Rainulf constantly begged her to be civil, she held her tongue. She even tried to smile, but couldn’t quite manage that. Excusing herself to her brother, she descended the narrow stairway to the main deck and ducked into the cabin. The heat in the tiny compartment assaulted her even before she closed the door.

The
Lady’s Slipper
had but one enclosed cabin, tucked into the stern beneath the quarterdeck. It was a dim, airless little chamber, crowded with Martine’s and Rainulf’s baggage, but it was private, reserved exclusively for their use during the crossing.

Martine ducked her head to avoid the low ceiling and unpinned the gold brooch that secured her hooded black mantle, tossing both into a corner. On her head she wore a saffron-dyed linen veil, intricately draped and tucked so as to reveal only her face, from eyes to chin. When she removed the veil, her hair spilled to her hips in a flaxen sheet.

There could be no mistaking that Rainulf and Martine were related. Both were tall, silver-blond, and fine-boned, as were the Northmen from whom they were descended. They bore a striking resemblance to their father, the late Baron Jourdain of Rouen, and although they had different mothers, both women had been fair and blond.

Through the cabin’s single tiny porthole, Martine watched the rugged Normandy coastline gradually shrink into the distance. She felt something stir against her legs and flinched, but when she looked down, she saw it was just her cat, a sleek black tom with white boots.

“Don’t worry, Loki.” Abandoning the cool facade with which she distanced herself from men like that Englishman—from all men except Rainulf, in fact—she sank to the floor and gathered the cat in her arms.

“They say England is...”
Cold and wet
. Shivering, she buried her face in his fur. “Perhaps there are lots of mice there. I’m sure
you’ll
be happy.”

The oak planks that formed the cabin’s ceiling and the floor of the quarterdeck groaned as Rainulf and the pilot crossed to stand directly above her.

When the Englishman spoke, she could hear his words clearly through the porthole. “The young lady, your sister—she’s not much for friendly conversation, is she, Father?”

Rainulf answered him with a long sigh.

“You’ll pardon my asking, Father, but has the baron’s son had the honor of being introduced to milady as yet?”

The pilot chuckled in a knowing way. “Aye, but I’d pay a month’s wages to be witness to
that
meeting.”

Why doesn’t she just ask me where it is?
thought Rainulf. He sat cross-legged on the cabin floor, fanning himself with his black skullcap as he watched his half-sister rummage through his traveling bags. Reaching within his robe, he withdrew a folded sheet of parchment.

He chuckled. “Gyrth thinks your Edmond will be in for a nasty surprise when he discovers how cold and haughty you are, and that what you need is the firm hand of a real man to crack your ice.”

Martine paused in the act of unlocking a small wooden trunk. “Who’s Gyrth?”

“Our pilot. The man whom you so contemptuously ignored this morning.”

Dumping the trunk’s contents on the swaying floor, she got on her hands and knees to sort through its contents. “How did you know his name? You always seem to know everyone’s name.”

After a moment of silence, she met his gaze and smiled to acknowledge the implied criticism, gentle though it might be. Her deep blue eyes, ignited by the shaft of noon sunlight from the porthole, widened when she saw the parchment in his hand.

She groaned and rolled her eyes, holding out her hand for the letter. “Rainulf, please. You know I can’t remem—”

He held the letter away from her. “You can’t remember the name of my closest friend?”

“Your closest friend? You haven’t seen him for ten years—not since the Crusade.”

“He’s my closest friend, and he has a name. Everyone has a name, Martine, even Saxons. And since this particular Saxon has gone to all the trouble to find you a husband—the son of his overlord, no less—the least you can do is try to remember his—”

“Brother, I think you vex me just for sport. ‘Tis unbecoming in a priest.” She reached for the letter, and he edged away from her. Grinning like a cat, she suddenly lunged, throwing him to the floor. His head hit the edge of the trunk and he yelped in pain, but she paid him no heed, snatching the letter with a gleeful laugh.

Rubbing his head and looking around for his skullcap, Rainulf said, “Did the nuns not tell you ‘tis a sin to do violence to a man of the cloth?”

Martine unfolded the letter. “The nuns told me many things. I retained what seemed useful and discarded what didn’t.”

He found the cap, replaced it, and sat up. For a convent-bred eighteen-year-old, Martine was remarkably irreligious. Despite his best efforts to strengthen her faith, it remained weak, and there were times that he feared for her immortal soul. Perhaps his failure to properly guide her stemmed from his inability to guide himself, for had not his sin of pride undermined his own faith? If the truth be told, he worshiped his own intellect more zealously than he worshiped his God. What of his immortal soul?

He took the six steps to the quarterdeck in three long-legged strides. As he paused at the railing to breathe in the warm sea air, Martine called to him from the porthole.

Martine reread Thorne Falconer’s letter—the letter that described her future husband—many times, until she could barely see the ink on the parchment. When she finally looked up, she saw that it had become dark, although it was still early afternoon. The sky through the porthole was no longer blue, but a leaden gray.

From the baskets in the corner came the yapping of the puppies and the incessant squeaking of the young falcon. The black cat paced furiously, and when Martine tried to pick him up, he drew his lips back and hissed.

Martine heard sharp cries above deck, the raised voices of sailors calling to one another, and the pounding of feet. She opened the cabin door, but no sooner had she set foot on deck than her hair, still loose, flew in all directions, whipped by wind and sea spray. She twisted it in a knot and held it firmly while she went in search of Rainulf.

The main deck bustled with noise and activity. Martine picked her way carefully, maneuvering around the barrels, crates, rowboats, baggage, and tackle crammed into the gangway. The few other passengers, who sat huddled in the middle near the big drinking cask, stared at her openly as she made her way through the mayhem.

The single sail, a giant, blue-and-yellow-striped square, snapped angrily as four men struggled to lower it, yelling at the top of their lungs to be heard above the wind and sea. On either side of the ship, men pulled in their oars and shuttered oar holes against the violent waves. Some tied down cargo, while others tugged at the cords that stretched a linen awning across struts hastily erected along the main deck. Martine stepped carefully, both to avoid getting in their way and because the vessel had begun to pitch in rhythm with the churning sea.