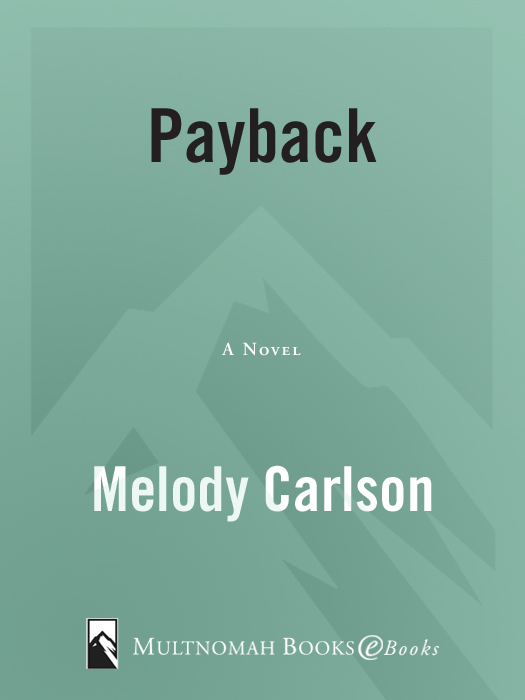 Praise for
the Samantha McGregor Series

“Melody Carlson’s novel
Playing with Fire
has all the makings of a great blockbuster movie. With captivating character development and nonstop action, it is a fast-paced read that’s definitely worth your time.”

“Carlson tackles tough subjects with a blunt honesty that respects her audience…and she also interprets some solid teachings on spiritual gifts.”

“Teens will appreciate
Playing with Fire
as its relevant theme of drug use makes for a fascinating spin to a Christian police procedural.”

“[In
Playing with Fire
] Carlson hooks readers of any age and draws them into a fast-paced world of loss, discovery, pain, and faith.”

“Beyond Reach
is an entertaining investigative thriller starring a heroine struggling with acceptance of God’s special gift to her though her faith is strong.”

“[In
Bad Connection
,] Carlson handles the controversial gift of visions with great integrity and care. Scriptures are strategically sprinkled throughout the book in such a way they not only let readers know what’s in the Bible, but add to the story as well.”

DIARY OF A TEENAGE GIRL SERIES

Caitlin O’Conner:
Becoming Me
It’s My Life
Who I Am
On My Own
I Do!

Chloe Miller:
My Name Is Chloe
Sold Out
Road Trip
Face the Music

Kim Peterson:
Just Ask
Meant to Be
Falling Up
That Was Then …

NOTES FROM A SPINNING PLANET SERIES

I normally don’t include a letter in my books, but because The Secret Life of Samantha McGregor series treads on some new territory, I want to make a few things as clear as possible.

First of all, this book is
fiction
—it’s simply a story that’s meant to entertain and to possibly point out some spiritual truths—but it is
not
a theological study on the proper use of the gifts of the Holy Spirit. While I do believe in the gifts of the Holy Spirit and in God’s desire for all of us to do many wonderful things, I also realize that Samantha’s gift, her ability to receive dreams and visions from God, is extremely rare. But it does make for a good story!

Second, my hope is that you won’t envy Samantha’s unusual gift or seek it for yourself, since that would be totally wrong! Don’t forget that God is the giver of every good and perfect gift, and
He’s
the One who decides who gets what and when it’s appropriate to use. If you go around searching for your own gifts, you can put yourself at serious risk. Satan masquerades as an angel of light and delights in tricking those who look for gifts in the wrong places. Don’t let that be you.

More than anything, I hope you’ll follow Samantha’s example by seeking out God and a committed relationship with Him. I hope you’ll desire to walk closely with God every day, to make Him your best friend, and to be ready for whatever adventures and gifts He has in store for you. Just make sure they come from God.

And finally, remember that the Bible is our ultimate source for answers to all of life’s questions. Also, please check out the resources and discussion questions in the back of this book.

I pray that this fictional journey will draw your heart closer to God and that He will be your lifeline—for today and for always!

A Word from Samantha

Turns out it was just God. Okay not just God. Because, believe me, God is way more than
just
anything. Still, it was hard to explain this weird phenomenon to my mom or the shrink or anyone. It still is. Other than my best friend, Olivia, I don’t think most people really get me.

But that’s okay, because I know that God gets me. For that reason I try to keep this part of my life under wraps. For the most part anyway.

A Word from the Word …

W
ith arms spread wide, the blonde steps back, staring down at her mint green formal gown now splattered with spots of bright red blood. When she looks up, her eyes widen in horror. She sees her date, a dark-haired young man in a neat black tux, his face twisted in pain as his fists tighten and he crumples to the floor. He curls into a prenatal ball…and a bright, shiny pool of blood stains the clean white floor around him. Music blares in the background, the bass thumping a fast beat. It’s a Pretty Ricky song, but the only sound the pretty blonde hears is coming from her boyfriend as he lets out a low growl followed by a gurgle. Then he jerks suddenly convulsing, drawing a final gasping breath.

The girl bends down, reaches out her hand as if she wants to help him, and then as if sensing danger or perhaps seeing someone now threatening her, she stands and backs away with a horrified look, turns, and desperately dashes in the opposite direction, tripping over her spiky high heels but continuing on…as if she is running for her life.

But it’s too late. More shots ring out in fast repetition and more screams of terror. All I can see is red now—blood is everywhere.

I wake up clinging to my comforter and still shaking. My heart pounds with a very real sense of fear, as if I, too, am in grave danger. It takes a long moment to realize that this was only a dream. Just a dream. But a realistic and horribly tragic dream. Without turning on the bedside lamp, I reach for the notebook I keep handy for times like this, and in the gray dawn light, I take several deep, calming breaths and begin to write.

I’m trying to capture all the still-vivid details, the style of the mint green gown (beaded with spaghetti straps, formfitting — the girl had a good figure) and those metallic-toned shoes (were they bronze or gold?). I try to recall the girl’s facial features (what made her so pretty?). I do remember what appeared to be diamond earrings, three piercings in one ear, smallest on top, largest on the bottom. But was it only one ear? And if so, which ear was it? Right or left? I close my eyes and try to see her again. Left. I believe it was left.

I remember the boy’s hairstyle, short and neat, as if he might be into athletics. I try to describe his tux, but other than black, I draw a blank. I can’t even remember his shoes, but I think they were black as well. I write down a description of the floor as I remember it—large square tiles of white with streaks of gray throughout. Marble perhaps? I describe what the music sounded like. (I don’t even know why I think it was a Pretty Ricky song since I’m not a fan, but it’s what went through my head.) And then I remember strings of lights glowing blurrily in the background. Like a party going on. A wedding perhaps?

I pause, searching my memory for more, trying to figure out if I’ve missed an important detail. Another person? A sound? A smell? Who had the gun? Or was the guy even
killed with a gun? Perhaps it was a knife. I don’t remember that part at all. Did I even see what happened? Is it possible that the girl was responsible? No, she seemed too shocked, too frightened. And yet if she’d committed a crime, perhaps in the heat of the moment, it would make sense that she’d be shocked and scared. I make note of this too. But there must have been more. Was there some little detail I missed? Did I forget something? I shut my eyes again and just sit there in bed, trying to remember. But that seems to be it.

I close my notebook and set it back on the bedside table. I will tell Ebony about this dream later today. I lie back down, breathing deeply to calm myself, but who can sleep after a dream like that? I wish I could call Olivia and run it past her. I’m sure she’d have some thoughts. But it’s not even six yet. Instead, I go to the kitchen and try to be quiet as I make coffee.

It must’ve been a prom, I decide as I pour water into the coffee maker. And that makes sense because it’s spring, and already people are starting to pair off and plan for prom at my school. Even Olivia is beginning to talk about it. She’s pretty sure Alex is going to ask her. Naturally, she thinks Conrad will ask me. And I think it’d be fun to go to prom. It’d be a first for me, for sure. But what if there’s going to be a murder that night? Still, I didn’t recognize either of the people in my dream. And the girl, especially, had the kind of looks that a person would remember. She looked the type who would be well known. But I’ve never seen her before. I am certain of that. Still, I suppose she could be new at school…or possibly she hasn’t started going there yet. Maybe today will be her first day The guy was unfamiliar too. I didn’t get a very good look at his face. But for some reason, he struck me as athletic. That might’ve
just been the hair. Although it seems he was tall, well built. I better make a note of that.

Our prom is still a month away, so that gives me time. Unless it’s not our prom. What if it’s another school’s prom? Who knows what dates that might include? I know schools like to stagger the dates so all the local restaurants aren’t overwhelmed with high school students going out to dinner before their proms. It’s possible another high school could have a prom as soon as next weekend. I will have to mention this to Ebony ASAP.

I pour a cup of coffee, add some milk, and go into the living room and sit by the window to watch as the morning slowly comes. I think about Zach now. And as I often do in the morning, I pray for him. He’s back in rehab again. The good thing is that he actually wanted to go this time. Even though it was not optional, he was happy to go. He knew that he needed it, that he was lucky to get this second chance. And he promised Mom and me that things are really going to be different when he comes back this time. But that won’t be for six months. Still, he didn’t complain. I know he was thinking it was better than doing prison time. And that was a very real possibility. If Zach hadn’t fully cooperated with the DA and police like he did, I’m sure he would be in prison right now. As it was, he spent several weeks in jail. That in itself was sobering—in more than one way. And although I’m still sad—for Zach’s sake—I am so thankful he is alive. Things could’ve gone so differently. I’m thankful for something else too. Zach is finally returning to God. He told me that right before he left for rehab. He asked me to look for his old Bible and send it to him. I promised to send him a Bible, whether or not I found his old one. But I did find his, and I sent it just last week.

Winning the Viscount’s heart (Regency Romance) (Regency Lords Book 2) by Regina Darcy
Katie Rose by A Hint of Mischief
Limitations by Scott Turow
Corbenic by Catherine Fisher
A Writer&amp;#39;s World by Jan Morris
Damage by Robin Stevenson
Finding Midnight by T. Lynne Tolles
Where She Has Gone by Nino Ricci
From The Wreckage by Michele G Miller
The Newsy News Newsletter by Karen English