Paying the Price (Book 5 of The Empire of Bones Saga) 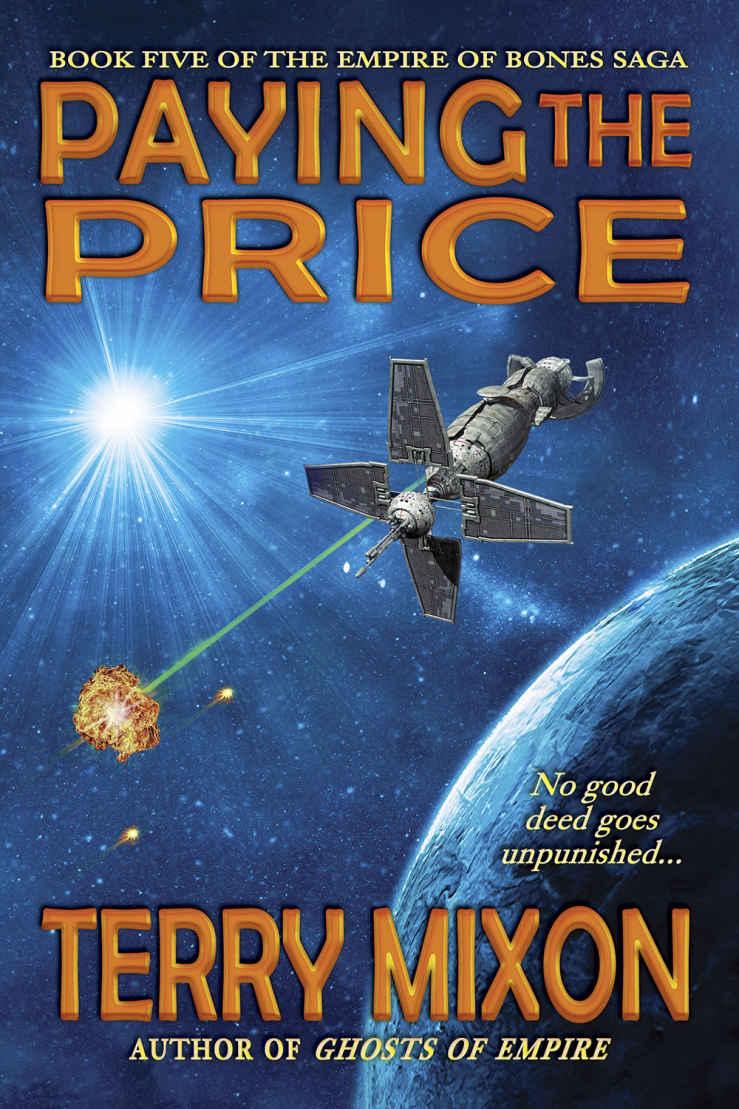 Book Five of The Empire of Bones Saga

Admiral Jared Mertz and Princess Kelsey Bandar saved billions of lives and staved off an invasion of the Terran Empire, but not everyone is cheering their success. Their triumphant return sets off a chain of events that threaten not only their lives, but everyone they hold dear.

Crown Prince Ethan Bandar, heir to the Imperial Throne, will stop at nothing to claim his birthright. He won’t allow anyone to stand between him and ultimate power. Not his sister. Not his half-brother. Not even his father.

Kelsey, Jared, and their battle-hardened allies must fight to survive his insidious attacks and race to stop a looming civil war. With the future of humanity on the line, can they save the world they love from blood and fire?

You can always find the most up to date listing of Terry’s titles on his
Amazon Author Page
.

The Empire of Bones Saga

Want Terry to email you when he publishes a new book or when one goes on sale? Go to
TerryMixon.com
and sign up for his new releases notification list. Those are the only times he’ll contact you. No spam.

All rights reserved. No part of this book may be reproduced or transmitted in any form or by any means, electronic or mechanical, including information storage and/or retrieval systems, or dissemination of any electronic version, without the prior written consent of the publisher, except by a reviewer, who may quote brief passages in a review, and except where permitted by law.

This is a work of fiction. All names, characters, places, and incidents are the products of the author’s imagination, or are used fictitiously. Any resemblance to actual persons, living or dead, events, or locales is entirely coincidental.

She may be reached at:
[email protected]

He may be reached at:
[email protected]

She may be reached at:
[email protected]

To my wife Donna. I love you more than life itself.

This book was a long time coming. After four books, the characters finally came home. Not to say their story is over. Far from it. But the first draft was a bit of a hot mess and I’m deeply indebted to my beta readers for pointing out things I needed to say. And things I didn’t

Any remaining errors are all my doing, I assure you.

My deepest thanks go to Tracy Bodine, Michael Falkner, Cain Hopwood, Kristopher Neidecker, Bob Noble, Jon Paul Olivier, Tom Stoecklein, Dale Thompson, and Jason Young for their insight. I would look like such an amateur without their keen eyes and incisive commentary. Thank you so much.

A special shout out to Tom Stoecklein for really going the extra mile. Many of those five thousand new words are because of you, man. Thanks for pointing out so many places I needed to step up. Challenge accepted.

Also, so many people have bought my books and left kind reviews. Thank you all so much. Every one helps.

Special thanks go to John McCarthy for formatting the print version of this book. And for putting up with me. Seriously.

A second special thanks goes to Veronica Giguere for doing the fantastic audio versions of The Empire of Bones Saga.

Numerous others have participated through comments in one way or another. Thank you all.

“Admiral, do you have a few minutes?”

Jared Mertz looked up groggily from his lunch in the officers’ mess to find Doctor Jerry Leonard standing beside his table. The fog of exhaustion that hung over Jared had dulled his edge. It seemed like a year since he’d slept a full night.

He gestured for the scientist to join him. “Pull up a chair and order something to eat.”

The older man sat down primly. “I had something in the lab an hour ago, but thank you. I’d like to take one more try at traversing the weak flip point before we pull out.”

The strange variants of the standard flip points were new to all of them and the scientists were still struggling to understand them. Some only allowed one-way passage. Others were just as hard to find, but two-way. They knew so little about the new stellar phenomena.

The one in the Harrison’s World system had eaten every probe they’d sent through it. Not one had returned. Not even when programmed to return as soon as the flip capacitor recharged.

Of course, no enemy had followed them home, so that was good news. Jared thought whatever was happening to them was probably natural. Perhaps this flip point was one-way for even the smallest of vessels.

“The fleet is performing the final checks before we leave for Pentagar,” Jared said. “We’re on a tight schedule.”

“This won’t take long. We’ve devised a new probe. Well, actually, we built one that looks like Frankenstein’s monster. The core is a standard probe, but we added an external battle screen generator and bolted on the power system from one of the defunct war machines. We even added a second flip capacitor to speed its return.

“If the environment on the other side of the flip point is hostile—which at this point seems a given—that should allow it time to return with some readings. We’d like your permission to send it through.”

Jared shrugged. “Why not? Let me wrap up my lunch and I’ll join you on the flag bridge. Say fifteen minutes?”

The scientist beamed. “Thank you, Admiral.”

Jared finished his meal and returned to the bustling flag bridge. Over the last few months, he’d selected a full-time staff of officers to assist him in commanding the fleet he’d assembled. They sat at their stations all around the circumference of the large control center, monitoring the preparations for departure.

No one called out when he entered the bridge. That had been one tradition he was happy to dispense with. Everyone had work to do. They didn’t need to stop what they were doing just because he’d walked off the lift.

He sat at his console. It swept a full 270 degrees around his command chair, giving him the ability to multitask like nobody’s business. It had taken him months to get fully accustomed to it, but now he was thrilled at how much data he could keep track of at once.

Jared pulled a headset from the niche in his console and slipped it on. His implants could interface without it, but the headset allowed for much greater data throughput. When linked to his flagship, he could access anything at lightning speed and in tremendous detail.

Part of his attention went to the scanner readings. The superdreadnought
Invincible
floated in a wide orbit around Boxer Station. They’d captured the Old Empire Fleet base from the Rebel Empire AI that had once ruled this system.

The factory ships would come in particularly useful back home. They had all the tools needed to make the high technology items they’d need, like the cranial implants. They couldn’t make the Marine Raider equipment because
Persephone
didn’t have the details on the manufacture. That had been one of the Old Empire’s most closely guarded secrets.

Once they managed to crack the secret of the Raider hardware, he suspected they’d have a crash course in bringing as many marines up to those specs as possible. They’d have to impose some stringent psych exams to keep from giving that kind of power out of the hands of the wrong people.

Those factories could also duplicate themselves. With more manufacturing capability, they could build advanced shipyards and simultaneously lift themselves up to Old Empire tech levels. Arguably, they were the most important ships in the fleet he’d gathered. Two just like them would go back to Erorsi and Pentagar with his compliments.

It would take a lot of reverse engineering or recovering the plans at some future point, but the factory ships could probably also build new AI hardware. The Empire would need to have more sentient AIs on their side in the coming fight. Though, he admitted it would probably take the emperor a while to come around to that point of view.

All the ships were severely undermanned and only functional at the most basic level. Not even Boxer Station’s construction bays could perform miracles. They took in battered wrecks and repaired the critical systems. The rest would need to happen by hand, because there was an almost unending line of derelicts waiting their turn.

They’d brought more people in from Pentagar and Erorsi, but that barely made a dent in their needs. They’d even begun careful, limited recruiting from Harrison’s World. They had to be certain those people were trustworthy before they told them the truth about the Rebel Empire.

After a lot of thought, Kelsey had decided that the people there had to know the truth. They couldn’t just hide it from them. That was wrong. And the truth would get out. That would be damaging. They had to stay on the moral high ground.

Plans were in development to roll out the knowledge once they were sure they had the existing implants scrubbed of the viral code. There would be resistance, but that was natural. They’d be upsetting the existing layers of society.

They’d be giving the lower orders implants and medical nanites. The higher orders, used to being the lords of all they surveyed, would scream bloody murder. They’d deal with it. Learn from it. This process would eventually play out in many other systems, so they had to refine the process while they could.

And in the end, everyone would be better for it. The hard part was convincing them of that. Kelsey had recorded a number of speeches that the leadership could play when the time was right. Jared hoped they helped explain the situation and keep the inevitable violence to a minimum.

Back to his current situation. Even understrength, the ships he’d gathered represented more fighting power than the rest of the New Terran Empire. Hell,
Invincible
alone could conquer his nation. The rest was overkill.

They also had thirteen Fleet transports for cargo and an upgraded cruise liner to carry civilians.
Best Deal
, the freighter that had housed their scientists, was far too slow to keep up. They’d be leaving her here.

Captain Anton Keller,
Best Deal
’s civilian skipper, was thrilled with the larger and much faster ship Jared had given him. It had military grade defenses, systems, and engines. It also carried many times more cargo than his old ship. He’d lost no time renaming her
Best Deal II
. The original one would go to Erorsi to help rebuild the system.

They’d even found a luxurious yacht to take home as a gift for the emperor. The current Imperial yacht was a fine vessel, but this one was much faster, had real defenses, and was even armed. Jared was sure Karl Bandar would like it.

They’d done a few modifications to
New York
as well. They’d added battle screen generators and a second set of flip capacitors. The Old Empire versions of the capacitors were small enough to fit beside the current ones in engineering. They’d had to stash the battle screen controls in a conference room, but Captain Kaiser was happy to have the extra protection