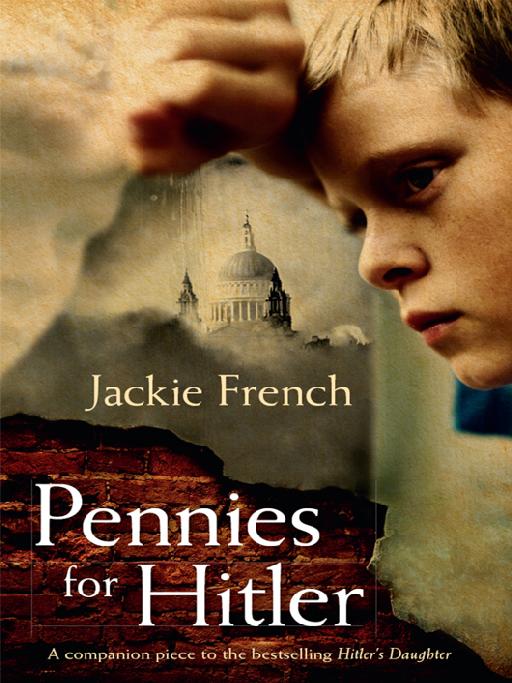 To the magicians of Monkey Baa Theatre for Young People
— Eva, Sandie, Tim and all the cast and crew — who have
taken
Hitler’s Daughter
on so many kinds of journeys to so
many audiences, with love and gratitude

A Further Note from the Author

Other Titles by Jackie French

Some stories have no true beginnings. Perhaps this story was born ten thousand years ago, when a hungry man on a hilltop saw strangers wandering down his valley.

‘Enemies are coming!’ he cried. His tribe picked up their spears.

That afternoon there was blood on the grass.

Hatred is contagious. Fear is too. When things are bad it is good to have someone else to blame.

This part of the story begins with a boy.

There were cream cakes for tea the afternoon they killed Georg’s father.

He had been happy that morning, too excited to concentrate as he wound the tape measure around Johann’s head. All the other boys in his class at the Adolf Hitler Schule measured their friends’ heads too. ‘The Rektor will give a speech to the graduating students,’ Georg whispered. ‘And then there will be cakes for afternoon tea.’

Georg nodded. This was the first year he had been allowed to go to the graduation ceremony at Papa’s University, and Mutti had promised him there would be cream cakes.

‘I wish I could have the afternoon off school and eat cream cakes,’ whispered Johann.

Georg grinned as he wrote down how wide and how long his friend’s head was. It was good to have an important father who was a professor at the University.

‘Silence at the back there!’ called Herr Doktor Schöner. Herr Doktor Schöner was new. The older boys said he had been one of the earliest members of the Nazi Party, years ago, with the Führer. Now he taught at their school! ‘Has everyone finished measuring?’

‘Georg, collect the answers,
bitte
, and bring them to me.’

Georg collected the sheets of paper, then took them up to the desk on the platform under the blackboard and the big photo of the Führer.

‘Thank you,’ said Herr Doktor Schöner. ‘Sit down, Georg. Now, can anyone tell me why the shape of the head is important?’

Georg had already read the whole Racial Studies textbook. He put up his hand.

‘Yes. Good,’ said Herr Doktor Schöner enthusiastically. ‘Some races have small, narrow heads. That is why they are stupid. Some races have round heads. They are slow, and cowardly. But the pure German Aryan head …’ Herr Doktor Schöner stared around the class, as though he is judging all our heads, thought Georg, suddenly nervous. ‘The Aryan head is wide, but long too. Those with Aryan brains are not only most intelligent, but also natural leaders.’

A boy put up his hand. ‘Are all Germans natural leaders?’

Of course not, thought Georg, just as Herr Doktor Schöner said: ‘Of course not. Sadly, some German people married foreigners.’ Like Mutti married Papa, thought Georg. The prickle of unease grew. ‘Some Germans are only part Aryan. Even if they have blond hair and blue eyes, their heads may not be the right shape. That is why we must make the Aryan race
pure again. The Untermensch, the inferiors — those who are not as intelligent, or who are blind or lame, as well as, of course, Jews — must not be allowed to breed.’

He flicked through the boys’ answers. ‘Now, let us see what your heads say about all of you.’

Georg tried not to wriggle in his seat. Papa was English! What if Georg’s head shape was inferior?

Even as he thought it Herr Doktor Schöner lifted up his head from the papers. ‘Georg, would you come out to the front?’

Georg stood. The stares of his classmates as he walked to the front seemed as heavy as the weights they lifted in the gymnasium.

‘Look at this boy,’ said Herr Doktor Schöner. ‘Look at him carefully. What do you see?’

The class was silent. Georg tried not to let his fear show. Papa couldn’t be inferior. He was a Herr Professor even if he was English!

Georg glanced at him. Herr Doktor Schöner must not know Papa was English! But the English King’s family was German. Englanders had German ancestors. Papa must have German ancestors too.

He was a perfect Aryan! He felt like bouncing on his toes. But he stayed standing straight and firm, like the German soldiers Herr Doktor Schöner said they must be like.

‘A perfect Aryan holds himself upright,’ said Herr Doktor Schöner. ‘He is brave, and in command.’ Georg was glad he hadn’t bounced. ‘You may sit down, Georg. Now, can anyone tell me how you recognise a
Jude
?’

Johann put up his hand. ‘A
Jude
has a long nose, and black hair and eyes. They slouch and —’

The bell rang along the corridor. Racial Studies was over.

There was a crowd around the big newspaper barrel on the footpath as he came out of school. There always was, these days. The newspaper barrel had the pages of
Der Stürmer
pasted on it every day, so even those who couldn’t afford to buy a copy could see the great things the Führer was doing.

Georg craned his head to see the pages through the crowd. There was a big photo of the Führer reviewing his troops — thousands and thousands of them with their arms held out in salute. Georg could almost hear their cry: ‘
Heil
, Hitler!
Heil
, Hitler!’

Georg wished he had been in the crowd to shout and salute too.

Their house was only two streets from the Adolf Hitler Schule. It had been the Rainer Maria Rilke Schule until last year, when the name had been changed to honour the Führer. Papa had been annoyed. Papa loved poetry, and Rilke had been a great German poet, one of those Papa taught about at the University.

He sniffed. Lamb stew with dumplings for lunch. Down in the kitchen he could hear Lotte singing. Tante Gudrun said good servants shouldn’t sing. But Papa laughed and said, ‘Let her have her fun.’

Tante Gudrun had snorted. ‘That is how you English do things, I suppose.’

Georg thought Papa’s ideas better than Tante Gudrun’s. And Papa was a good German now. He had lived here for fifteen years, ever since he had come as a student and fallen in love with Mutti.

Tante Gudrun had pig’s eyes. Papa had pretended to be cross when Georg said that, but Georg could see that he was laughing inside, and Mutti too.

What if Tante Gudrun really did have pig’s eyes? Georg grinned. Maybe an evil witch had passed a pigsty one day and turned the pigs into women. One woman kept her piggy eyes. One had piggy feet so she always had to keep her shoes on …

Mutti and Papa were already sitting at the table in the dining room. Georg kissed Mutti’s cheek — it smelled of flowers — then Papa’s, warm and smooth. Drops of water glistened on the butter in its crystal bowl on the table. The cherry jam gleamed next to the hot rolls. ‘Good day, Papa, Mutti.’

‘And good day to you,’ said Papa in English. The newspaper lay next to him, still folded.

Georg glanced down at it.

‘Will the Führer be at the graduation?’

Papa laughed. ‘Of course not.’

Papa grinned. ‘Our mighty leader has better things to do than come to graduations.’

‘Shh.’ Mutti gave a swift look towards the kitchen door. ‘Lotte will hear you.’

Papa reached across and picked up Mutti’s hand; he kissed it. ‘Somehow I don’t think Herr Hitler will send me to a labour camp just for calling him a mighty leader.’

‘I think that —’ began Mutti, then stopped as Lotte came in with the lamb stew.

Georg waited for Mutti to eat first, then lifted his fork.

There were letters on the table too. The postman must have just been. Georg craned to look at the handwriting as he chewed his lamb. One for Mutti from her friend in the Black Forest and one for Papa from his sister, Aunt Miriam, in England. He wished someone would send him a letter.

He selected a roll with poppy seeds and watched the butter melt into the white bread. He reached for the cherry jam.

‘One spoonful,’ said Mutti, not even looking up from her letter.

Mutti laughed and looked at Papa. ‘What do you think? Is graduation day as special as Christmas?’

Papa looked up from Aunt Miriam’s letter. ‘Getting those students to graduation is special enough. Some of them think about nothing but politics these days. Smashing shopkeepers’ windows, beating up old men for the crime of being Jewish.’

‘Shhh,’ said Mutti again, with a glance towards the kitchen.

Georg spread his two spoonfuls of cherry jam. Papa didn’t understand about the Jews. It was the Jews’ fault Germany had been so poor till the Führer took control. Herr Doktor Schöner had explained it at school. The Jews controlled the banks. They poisoned the Vaterland and made it weak just by living among them. The Jews killed babies for their secret ceremonies; and they poisoned the wells in villages.

Sometimes Mutti laughed when Papa didn’t even know what had been in the newspaper last week. She said that he was still living back in Goethe’s time, or Schiller’s. They were more of the German poets Papa loved.

Suddenly Papa slammed the letter on the table. Georg looked up in shock. Papa was never angry.

‘Darling, what is it?’ asked Mutti.

Papa held up a square of newspaper. ‘Miriam. She has the kindness,’ Papa made the word sound bitter, ‘to send me an advertisement for a job at Oxford. A tutorship!’

‘But you’re a professor!’ said Georg. As though Papa would want a tutor’s job. And in England!

‘She means well,’ said Mutti. She cast a quick look at Georg. ‘My love, perhaps she has a point. Maybe you should take a year’s leave. We could go to England till things settle down here.’

‘No. There’s no point in discussing it any more,’ said Papa. ‘This is my home now. Your home. Georg’s.’ He slapped his napkin down onto the polished table, stood up and strode from the room.

Georg heard his footsteps hard on the stairs.

‘You may clear up now,’ said Mutti steadily, as Lotte peered from the kitchen. ‘Yes, Georg, you had better go and get dressed.’

Georg nodded. Papa’s anger cast a chill over the house. He hadn’t even told Papa how he had the most Aryan head in the whole class either.

He hesitated outside Mutti and Papa’s bedroom door, then knocked. ‘Papa?’

Papa opened the door. ‘Yes?’ He was smiling again. ‘Have you come to see me tie my bow tie?’

He hadn’t: he’d just wanted to see if Papa was still angry. But he nodded. He sat on the bed next to Papa’s freshly ironed long
black academic gown as Papa took the tie from its case and circled it around his collar.

‘Papa, why does Aunt Miriam want us to live in England? Is she lonely?’

Papa chuckled. ‘Miriam? Not her. No, she’s worried for us, that’s all.’