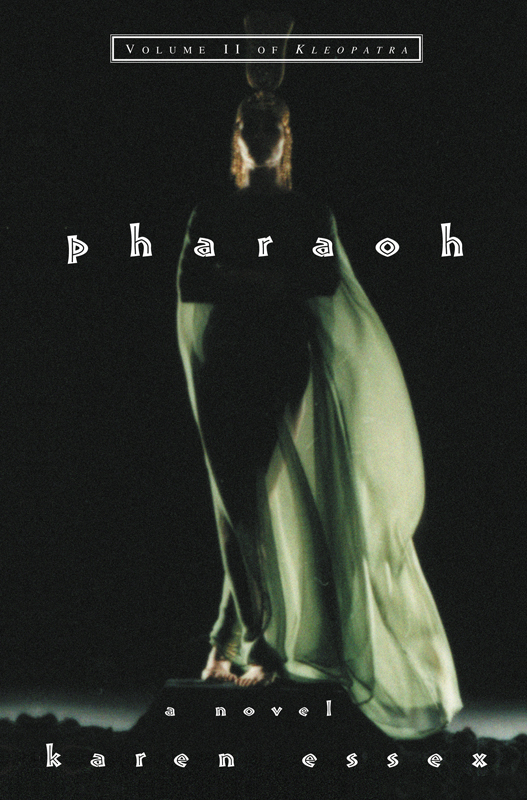 Rome In the 6th year of Kleopatra’s reign

The city of Narbo in Gaul: the 6th year of Kleopatra’s reign

Actium, the coast of Greece: the 20th year of Kleopatra’s reign

Actium, the coast of Greece: the 20th yearof Kleopatra’s reign

Pharaoh
is for my daughter, Olivia Fox,
who for most of her life has had to share her mother
with the queen of Egypt Kleopatra’s
Genealogy 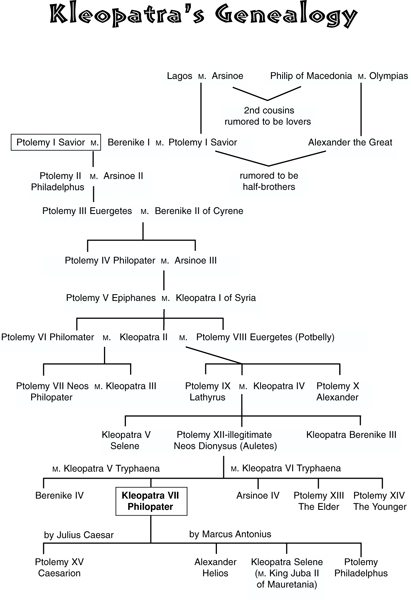 T
queen stares at the phalanx of whores as if she is about to execute a normal rather than deplorable duty of state. Silent,
tense, confused, they await her inspection and her command.

Charmion, the weary sergeant, the old warhorse long attached to an unpredictable commander in chief, has herded them to Kleopatra’s
chambers in utter silence. A great feat of intimidation, the silencing of a gaggle of whores. But that is the way with Charmion,
who executes every duty with a diligence unanimat-ed by emotion of any kind. She retains an implacable expression even while
carrying out the bizarre wishes of the sovereign to whom she has sworn her life. An aristocratic Greek born in Alexandria,
Charmion is not tall, but casts the illusion of towering height. Her bearing shames the carriage of a queen, even of the queen
she serves. Though she is fifty-one, her sallow skin is smooth. Three wrinkles, delicate as insects’ legs, trace from the
corners of her brown-yellow eyes. Her mouth is full, a burnt color, like a river at sundown. Two tributaries, both southbound,
run from her lip-locked smile, tiny signals of age, a result of the anxiety she suffers over the queen’s behavior.

Unlike the queen, Charmion dislikes all men. Wordlessly, she has endured Kleopatra’s relations with Antony with lugubrious
countenance, as if she has suffered all these years from an intense constipation. Antony, charmer of maidens, actresses, farm
girls, and queens, never elicits a smile from the woman. In her youth, the queen heard, Charmion had bedded with other women,
though she
could never confirm the rumors. Of Caesar, and of the queens relations with him, however, she had approved, though her sanction
was expressed only by absence of criticism.

Charmion has dressed the prostitutes herself, forcing Iras, the temperamental eunuch, Royal Hairdresser to the queen, to weave
tiny jewels and trinkets of gold into their locks. For a prim woman, she possesses a talent for seductive costume. Knowing
the Imperator’s inclinations, she has chosen many large-breasted girls. On the most obscenely endowed, she has encased their
sumptuous glands in loosely woven gold mesh so that the nipples, rouged to an incarnadine red, appear trapped in an elegant
prison, eager for release. “Antony shall enjoy that,” thinks the queen.

The courtesans regard their monarch, wondering what kind of queen, what kind of woman, sends prostitutes to her husband, much
less approves their comeliness before she allows them to go to him. The queen, nervous, reading their thoughts, attempts to
cover her trepidation with characteristic chilling authority. She rises to scrutinize her troops who are wrapped not with
the armor of war, but with the luxurious weaponry of seduction. Reddened lips, slightly parted. Little invitations. Nipples:
crimson, erect, acute, like hibiscus buds against stark white skin. Bare, nubile shoulders soft as dunes. Teasing one, an
auburn tendril; grazing another, a crystal earring, sharp as a dagger, threatening to stab the perfect flesh. Luminous, kohl-rimmed
eyes; vacant eyes, eyes without questions. Eyes that do not accuse, do not interrogate. Eyes that know how to lie. A naked
belly and then another, larger, stronger, with a garnet chunk-or is that a ruby?-tucked in the navel. And of course, the prize-the
female motherlode, coy, apparent, beneath transparent gauze. Some shaven, some not. Good work, Charmion, she thinks. Like
all men, her husband craves variety.

A detail: long fingers, slender toes, adorned with rings, jewels. Excellent. Ah, but not this one. “She must leave,” the queen
says sharply, not to the half-breed beauty before her with fat, choppy hands, but to Charmion, who waves the girl out of the
room. Antony, connoisseur of the female form, dislikes “peasant digits.”

“Have we more?” she demands of her lady-in-waiting, knowing how thoroughly prepared she is for any situation, any disaster.

“Yes, Your Royal Grace. There are twelve alternates in the antechamber.”

With a nod, Charmion leaves the room, returning with twin girls of thirteen, draped in the simple robes of a Greek boy, with
one small breast peeking from the
fold. The androgynous creatures curtsy low, remaining on the ground until the queen passes them, rising only at the snap of
Charmion's fingers. Compliant in nature, schooled in ritual. That should please her husband. A fine mix.

“Yes, I believe we are complete now. Twelve in all.

“Ladies,“she says in her most imperious voice. They stand at attention, but only Sidonia, the voluptuous red-headed madam
of the courtesans, meets her gaze. “Marcus Antonius, my husband, my lord, proconsul of Rome, commander of the armies of the
eastern empire, sits alone, inconsolable, gazing over the sea. He is despondent.

Now the ranks stare at her in disbelief, for what queen makes an army of whores? Puts the Fate of her kingdom in the hands
of a dispatch of painted strumpets?

“You must revive my husband. It is as simple as that.”

One of the girls, the one with the tough stomach and bejeweled navel, struggles to stifle a giggle, but Sidonia sees the stern
raised eyebrow of Charmion arched in warning. She slaps the girl, who crumples to the ground in tears. Sidonia bows apologetically
to the queen, kicking the girl with a sandaled foot, reducing her cries to a choked dog-whimper

The queen is amused but remains nonplussed-a countenance at which she excels, thanks to her apprenticeship with the late Julius
Caesar. “Tonight, ladies, you serve one of the greatest men in history. His courage is legend. His conquests span the world.
His loyalty, his heroism, unparalleled. But he sulks alone in his mansion by the sea. The mighty lion cringes and licks his
wounds. He must rally. He must become a man again. And we know, ladies, don’t we, what makes a man a man?”

Every whore smiles. For all their differences-the queen of Egypt and courtesan slaves-they share the same intuitive knowledge.
What every woman knows. What every woman uses.

“I am aware that there is gossip. And I am aware of those who spread it. They will be dealt with. As for you, you are to let
all those who visit your chambers know that your queen sailed home into the harbor of Alexandria flying the flags
of victory after the war in Greek waters. You are to say that the Imperator, my husband, is your most virile and demanding
client, that you have heard with your own ears and seen with your own eyes his plans for victory against Octavian, the fiend
who will terrorize our world if his ambitions are allowed to go unchecked. As you know, I do not allow soldiers to have their
way with court prostitutes, politically convenient as it would be at times. The Roman army, should it descend upon our city,
will not follow these rules. I encourage each of you to meditate on the Roman reputation for cruelty and degradation to conquered
women and then imagine your Fates, ladies, in the event that the Imperator does not overcome his depressed condition and refuses
to defend you against the Romans.

“Therefore, you shall succeed splendidly in rehabilitating the manhood of my husband and you shall spread with conviction
to every man, minister, artisan, and soldier alike who enters your bed that the great Antony fights a war the way he makes
love-with vigor, with passion. That his prowess in the sport of war is excelled only by his prowess in the sport of love.
Let the word spread to all corners of the city, and let it be heard by sailors who will take the tales to other ports. I know
you have the power to convince. I requested not only the most beautiful of you for this mission, but the most intelligent.
The most shrewd.

“As you are cunning, I shall make you a bargain. If you do your job to perfection, you shall be given your freedom after Octavian
is defeated. If you fail and my husband remains in his tower sulking like a baby, you shall be put into the fields to harvest
the crops, or sent to the Nubian mines. Let me be plain: If you betray the throne, if you are heard uttering one word about
the Imperator’s melancholia, if rumors of his ill-humor are traced back to you, if you do not follow my orders to the letter,
you shall die, or wish you had.”

The smiles fade. To Charmion: “They may go.”

Irritable Hearts: A PTSD Love Story by Mac McClelland
World Made by Hand by James Howard Kunstler
The Girlfriend Project by Robin Friedman
The Naked Year by Boris Pilnyak
X Marks the Spot by Tony Abbott
Take Me Forever by Sellers, Julie
Savior In The Dark by Torres, Ana
Beside the Brook by Paulette Rae
Keeper Of The Light by Janeen O'Kerry
The Path Of Destiny by Mike Shelton