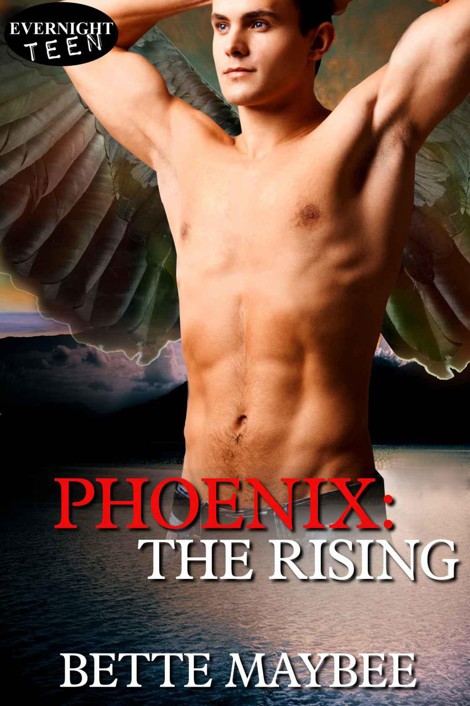 Exactly four years ago, my then thirteen-year-old daughter, Allison, uttered the words that would change the course of my life. “You should write a book.” The words were simple. Innocent. Inspired by a thirty-three-year-old love letter I decided to share with her after we had a poignant mother-daughter moment in the midst of reading the Twilight saga together. And so, I did. I started that day and I’ve been writing ever since.

Allison didn’t know what effect those words would have on our lives. Many nights my family would dine on take-out. The dishes would go undone. The clean laundry would wrinkle in the basket. My sons, Tim and John, were at college, so they didn’t experience this first-hand until they came home to visit and I would have to choose between writing and visiting with them. “Mom’s writing.” “Mom’s in the zone,” were words that would become the norm in our house.

PHOENIX
: THE RISING is dedicated to you, my family. Thank you for your sacrifice, your understanding, and your encouragement. You are my inspiration.

She tried one last time.

Clark
smirked, raised his fist, and flipped her the bird.

His short, red, pajama cape fluttered behind him as he flew from his perch on top of the refrigerator, then flipped over his head on the quick descent to the cool marble tiles below. Pain contorted the little monster’s face as he crumpled into a broken ball on the kitchen floor.

“Crap!” Allison peeled her legs loose from the tangle of appendages
Clark
’s brother, Clayton, had pretzeled around her

and raced into the kitchen, sliding to a stop in front of the boy. She didn't know whether to strangle him or sweep him up in her arms. At least he was down.

“Ooo ... you are in so much trouble!” Clayton peered breathlessly over her shoulder as she examined the wailing boy’s ankle. “My parents are gonna kill you!”

The little shit was right. Allison knew she was in trouble. She had just maimed the high school principal’s son. She would never get another babysitting job in
Palisades
, and no babysitting jobs meant no car for her senior year. She was doomed. Time to kiss butt.

Grabbing the box, she rifled through the frozen treats looking for a hint of the coveted ruby color, knowing full well that Clayton had scarfed the last one down before dinner.

Allison stopped her frantic search and turned. The eight-year old twins stood side-by-side, dead-ringers for the towheaded terrors from

The Village of the Damned
. Allison shuddered, half-expecting their eyes to start glowing. Instead,
Clark
’s face twisted into a maniacal leer.

“You are such an idiot!”

The two brothers bolted from the kitchen before Allison even realized that
Clark
had been faking it. As she rounded the corner to the family room, the boys were already using their mother’s prized Natuzzi roll-arm sofa as a trampoline.

“Hey, Allison, we got somethin’ special to show you.” Clayton, the thicker of the two, cupped his hand to his brother’s ear and whispered.
Clark
nodded. “On three. One, two, three!”

Clark
whooped as he flipped her the bird again, and Clayton one-upped his brother when he bent over and pulled the back of his Ninja Turtle pajama bottoms down, mooning Allison with his pudgy, white, eight-year-old butt. He waggled it at her while
Clark
decided to use both hands to flip her a succession of double-birds.

“Thanks, guys! I can’t wait to show this to your parents.”

Both boys stood motionless on the couch, their jaws hanging slack as they stared at the cell phone in Allison’s hand.

“I’m sure they’d love to see how you behave when they’re gone.”

Allison stuffed the incriminating evidence in her pocket, smiled, and perched herself on Mrs. Paulson’s favorite wingback. She grabbed a

magazine and thumbed through it as she hummed to herself, silently gloating that she beat the two little shits at their own game. The boys looked at each other, then hopped off the sofa and approached Allison.

“Please don’t tell. We’ll even go to bed early. Just don’t tell them!” Clayton sniffled, wiping his runny nose on the back of his already snot-smeared hand. Real tears flowed down his reddened cheeks.

Allison fought back the urge to laugh. Blackmail was such an awesome motivator! “Okay. I won’t tell them. But you two are going to bed now, and when I check on you in fifteen minutes, you better be asleep.”


Without a word, the boys turned and headed upstairs.
Clark
stopped at the top.

“I really am sorry, Allison.”

Allison was just beginning to nod off when she heard two car doors slam. She swung her feet off the Natuzzi and scanned the room.

Dirty glasses—in the dishwasher
. Just as the front door opened, she yanked her almost-forgotten ear buds out, cutting off Katy Perry in mid-chorus, and stuffed both the buds and her iPod in the pocket of her running shorts. Allison pasted on a smile as first Mrs. Paulsen—and then Mr. Paulsen—entered the room.

Mrs. Paulsen, a slightly overweight, frump of a woman who looked closer to fifty than her actual age of thirty-four, smiled sweetly with her too-red lips and cocked her head to the side as she patted Allison’s arm.

“How’d things go tonight, d
ear? Did the boys give you any trouble?”

Allison raised her eyebrows and lied through her newly braceless teeth. “It went really well. The boys had a good time.”

Mr. Paulsen pulled out a money clip and sauntered over to Allison as his wife went upstairs to check on the boys. He was obviously on the far side of forty, but tried to dress the part of a younger man in low-riders and a striped tee pulled dangerously thin across his bulging mid-section.

“Are you sure you don’t want a ride home?” Mr. Paulsen handed her a twenty-dollar bill, warm and limp from the ride in his front pocket. “I wouldn’t want anything to happen to my favorite babysitter.” Paulsen’s eyes shifted from Allison’s face down to her chest, where they stayed for several uncomfortable seconds before moving back up.

Allison felt the hot rush of blood to her face as she folded the bill and stuck it in her pocket. She wiped her hands down the front of her shorts. It didn't help. “No thanks, Mr. P. I’m training for cross country. Besides, my parents are fine with it.”

Paulsen thought for a moment then traced his tongue between the seam of his lips. “All right, but if you change your mind, just call. I can be there in a flash.”
Forcing a smile, she pulled open the front door and sprinted away, trying to gain as much distance in the shortest amount of time possible between herself and the ogling pervert.

Allison fell into her pace, running parallel with the broken yellow line down the middle of the road that led to her father’s small sheep ranch located just two miles outside of
Palisades
. Cars rarely frequented this lonely stretch of road, so it was quite a surprise when she saw the dim glare of headlights headed her way.

The car, which was coming at a good clip towards her, slowed as the headlights illuminated Allison’s moving form. Her heart skipped a few uncertain beats, and she instinctively moved to the side of the road. A rush of adrenalin ki
cked in and her pace quickened.
As the car passed, a hand shot out the driver’s side window and waved.

Allison breathed a sigh of relief and smiled to herself as she waved back. She recognized the voice as one belonging to a Paiute boy from her History class, but she couldn’t recall his name.