Read Picture-Perfect (From the Files of Madison Finn, 8) Online

Picture-Perfect (From the Files of Madison Finn, 8) 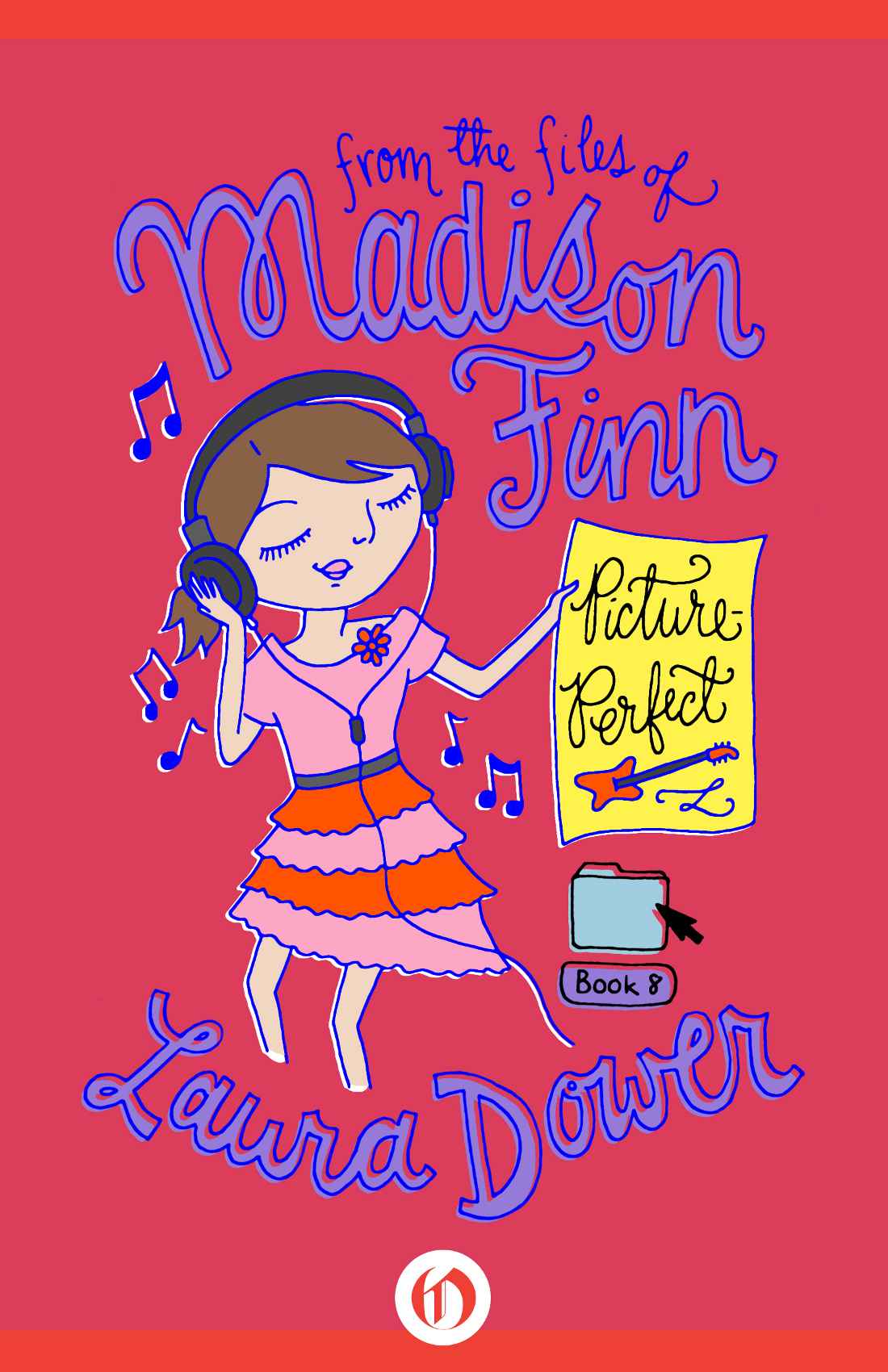 “Y
OU HAVE THE NEW
issue of
Blast
!” Madison said, grabbing the teen magazine off her friend Fiona Waters’s bed. On the cover was Nikki, the most popular pop star all over Far Hills Junior High—and across the globe.

“Oh my God! Isn’t she beeee-yootiful?” Madison’s other friend Aimee Gillespie said, reaching for the magazine from Madison. “I wish I looked just like this.”

In the cover photo, Nikki was wearing an off-the-shoulder striped top, shorts, and glitter makeup. Neon blue streaks striped her hair, and she had on three-inch platform shoes.

“Sure, Aim,” Madison said, laughing. “I can just see you painting your hair that color. And those shoes would look good in ballet class.”

Fiona giggled. “Read the article, you two. It says that she’s dating one of the guys from Jimmy J.”

The three friends plopped down onto the carpeted floor in Fiona’s bedroom and flipped to the cover story: “Meet Nikki Up Close!” There was a photographic spread with Nikki in different costumes, including some shots from her last concert.

“I love that outfit,” Fiona said, pointing to a cropped silver shirt.

“She has a ring on every finger. Just like me,” Madison said.

“Nikki was born near Far Hills?” Aimee said, reading the text of the article aloud. “Wow. She is like us. Did you know she lived near here?”

Fiona nodded. “Of course I knew that.”

“How could you not have known that?” Madison asked Aimee.

“I don’t know,” Aimee shrugged. “I’m not a Nikki expert or anything.”

“Nikki has the perfect life,” Fiona mused. “She’s visited something like fifty countries. How cool is that?”

Madison nodded. “She has a movie coming out, too, I think.”

“Come on, you have hair like Nikki’s, Aimee,” Fiona said.

“Nah, mine isn’t as blond as hers. She has a better haircut. And look at her stomach. It is soooo flat.”

“What?” Fiona asked. “What’s wrong with your body, Maddie?”

“You mean besides my butt?” Madison chuckled.

“What are you talking about?” Fiona said.

Madison sighed. “Come on, Fiona. Nikki is perfect and … well … I’m not exactly …”

“Maddie!” Fiona cried. “You guys need a reality check. She is not perfect. My dad told me that there are artists who airbrush pictures of celebrities like Nikki so that they look perfect. No one is
that
perfect.”

“I thought you liked her,” Madison said.

“I do,” Fiona said. “I like her clothes and her songs and her cool life—”

“Whatever!” Fiona threw her arms into the air and got up off the floor. “I’m going to get something to drink. Does anyone else want a snack?”

Fiona’s mother, Mrs. Waters, was the Cookie Queen. She baked baskets of gingersnaps and sugar wafers when Fiona and her twin brother Chet had friends over to visit.

“Maddie!” Aimee nudged Madison with her elbow. “How can you eat cookies? You just said you wished you were more like Nikki. Do you think she eats cookies all day? You can’t eat that stuff if you want people to notice you.”

“What are you talking about? What
people
?” Madison said.

“People at school,” Aimee said. “You know. Guys.
Everyone.
”

Fiona disappeared toward the kitchen to get a tray of snacks, leaving Madison and Aimee alone in her bedroom.

Aimee stood up and walked over to Fiona’s bulletin board. It was decorated with photographs, postcards, and a row of colored ribbons Fiona had won over the years playing sports. There was a spring soccer schedule tacked up on the board, too, with dates of upcoming matches.

“Well,” Madison said. “You do ballet every day.”

Madison dropped onto Fiona’s bed and bounced lightly. “Let’s put on some tunes,” she said. Fiona’s iPod was in the dock on her nightstand but Aimee clicked on the clock radio instead.

Aimee surfed for a popular local station. The girls often tuned in because the station would give away movie tickets and song downloads to listeners.

From the moment we met

“Turn it up,” Madison yelled. The two girls bounced on and off the edge of Fiona’s bed, singing every lyric along with the radio.

I wanna be closer still

There’s a place in my heart that you fill

I could be what you want

I know this is true

Aimee leaped up and twirled around, striking a pose as if she were singing into a microphone.

“What are you guys doing?” Fiona asked, walking back into the room with a tray of juice boxes and chocolate-chip cookies.

Fiona smiled. She put the tray down on her night-stand, and the three friends joined together in a circle.

“SUGAR-SWEET!” they squealed as the last chorus ended and Nikki’s voice faded away.

“This is Stevie Steves and you’re listening to WKBM KABOOM! Far Hills radio,” the announcer’s voice roared across the airwaves once the song had finished. “And that was sugar-sweet superstar Nikki performing her number-one smash hit ‘Sugar Sweet Like You.’”

“I LOVE that song!” Madison said.

The announcer continued. “But that’s not all, listeners. Get this! Nikki is coming to Far Hills. Stay tuned for details….”

“Did he just say—?” Madison gasped.

Fiona sat down on the edge of her bed near the radio. “Shh! Shh! Let’s listen and hear what they have to say!”

As the radio commercial finished, Stevie Steves came back onto the radio. “Tune in to win tickets to Nikki right here!”

“SHE’S COMING TO FAR HILLS?” Aimee screeched. “WE CAN WIN?”

Aimee couldn’t contain her excitement. She continued to jump around the room.

The three friends looked at each other, sure that Mrs. Waters had heard. Fiona went to open the door, but Chet poked his head inside before she could get there.

“Keep it down in there!” Chet barked. “Quit screaming.”

“Get out of my room, dork!” Fiona snapped back, throwing a shoe at the door.

“You’re the dork!” Chet shot back, slamming the door behind him.

“I’m glad I don’t have a brother,” Madison said, grabbing a cookie.

Aimee put her hands on her hips. “Yeah, and I have
three.
Lucky me.”

Fiona stuffed a cookie in her mouth too, but Aimee said she didn’t want one. “How can you guys eat at a time like this? We have a chance to win tickets to a Nikki concert!”

“What does that have to do with anything, Aim?” Fiona said.

The radio announcer came back on with all the contest details. “To win, all you need to do is to call us here at WKBM KABOOM! And if you’re the lucky random caller, you may be chosen as a super Nikki ticket winner. That means four tickets for you and your closet friends—plus a special trip backstage to meet Nikki up close!”

“We could
all
go!” Madison said.

“This is so exciting!” Fiona cried. “Okay, I’m totally going to call.”

Fiona turned down the volume dial on the radio and picked up the phone receiver.

Fiona had her very own phone right there in her bedroom. It was the coolest shade of grape-purple, and Madison loved the rainbow stickers she’d used to decorate the handle.

Fiona dialed the number for WKBM.

But it was still busy.

Chet poked his head in the door.

“What do you want?” Fiona yelled.

Fiona put her hands on her hips. “You have to wait. I’m using it right now.”

“What are you dorks laughing about?” Chet asked, glaring at them.

“GET OUT OF MY ROOM, CHET!” Fiona screeched again.

“If you’re not off the phone soon, I’m telling Mom,” Chet threatened.

Fiona snarled. “Fine,” as Chet walked out in a huff, slamming the door behind him.

Without missing a beat, Fiona picked up the phone and dialed the radio station once again. Still busy. She tried for at least five minutes as Madison and Aimee watched. After hitting redial about a hundred times more, Fiona’s eyes grew wide.

Madison and Aimee leaned in close to see what would happen.

“Did they answer?” Aimee asked.

Madison could hear soft voices on the radio in the background, so she went over to listen. Stevie Steves was about to talk to his tenth random ticket winner of the day.

Aimee covered her mouth with her palms so she wouldn’t scream.

“I WON?” Fiona screeched. “Oh, sorry about that,” she apologized to the person on the other end of the phone. “I didn’t mean to scream, but did I really and truly win tickets to the concert?”

Fiona listened closely, cheeks flushed. She gave the phone operator her name and then they put her on hold.

“They want me to wait,” Fiona blurted to Madison and Aimee. “They said I’m gonna be on the radio in a few minutes. With Stevie Steves!”

The three friends let out an enormous squeal. Fiona almost dropped the phone.

Madison couldn’t turn up the radio to hear because that would cause feedback, so she and Aimee leaned in close while Fiona talked on the phone on the other side of the bedroom.

“This is Stevie Steves back again with the winner of the hour,” the announcer said. “We have Fiona on the line. Fiona, are you there?”

Fiona froze. She said nothing.

“Fiona, are you there?” Stevie Steves asked again.

Madison and Aimee shot a look in Fiona’s direction, which snapped Fiona out of her overexcited trance.

“You betcha,” Stevie Steves said. “So tell me, are you a Nikki fan?”

Before Fiona could even answer, Aimee let out another squeak. Madison did too. Fiona joined in. The announcer heard it all.

Seidel, Kathleen Gilles by More Than You Dreamed
Girl with a Monkey by Thea Astley
Shelter for Elizabeth (Badge of Honor: Texas Heroes Book 5) by Susan Stoker
Reboot by Amy Tintera
Staking His Claim by Tessa Bailey
My Masters' Nightmare Season 1, Episode 12 "Confrontation" by Hansen, Marita A.
Silenced by K.N. Lee
Murder on the Ile Sordou by M. L. Longworth
Weapon of Choice by Patricia Gussin
Blood Cries Afar by Sean McGlynn