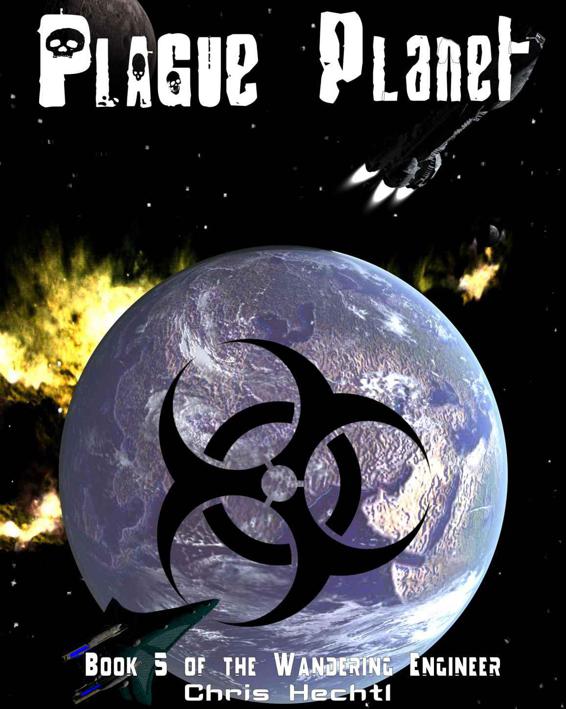 This is a work of fiction. All characters, events, and locations
are fictional. Some may be parodies. Some characters are with permission. Any
resemblance of some characters and places to others are strictly in the mind of
the reader. :)

All rights reserved, including the right to reproduce this book
and or portions thereof in any form.

Special thanks to my
family for their patience, my proof readers/ Copy editors and you dear readers
for hanging in there.

The events of this
book are several months after book 4 Ghost Station and in parallel to Jethro 2
First to Fight.

After leaving Antigua Prime station the Admiral crossed the system
to the B450a jump point to the galactic south of the sector. The warp chain was
an empty one for two jump points, B450a was a white dwarf, B449b was a binary
system with no habitable planets. Neither system had a Jovian gas giant so they
hadn't attracted any interest by corporations to set up refueling stations
before the war.

In their maiden trip out, Phoenix had matured into a class two
dumb AI, and from there into a class one smart AI. There had been a lot of
teething issues; the first jump the admiral hadn't gotten any sleep at all for
nine days. When they had finally exited hyper he'd dropped into an exhausted
slumber.

In desperation to cover all the posts Sprite had bent her ethics
a bit and wrote software for the dumb bots, class point five smart bots to
handle the day to day running of the ship. They were extremely limited, lacking
any social programming, but they got the job done when the attention of the
smart AIs and the admiral were needed elsewhere.

Their lack of learning ability was a serious hindrance though,
they lacked imagination and flexibility. The first week of using them had been
fraught with constant issues as they continuously updated their databases after
one mishap or another.

By the time they had crossed B450a he was ready to accept the AI
and bots as crew. He didn't trust Phoenix to navigate the delta band as he had,
so they made the crossing to B449b in the slower beta band, adding weeks to
their journey.

Phoenix the ship, formally the “Golden Dew Drop, NCC-1701E” had
been a corporate yacht and then a re-purposed fleet courier during the latter
stages of the Xeno war before she'd become a derelict in the outer edges of the
Antigua star system some seven hundred years ago.

She was small; really all drive with some luxury frills for her passengers.
Normally she had a crew of thirty organics and AI, and could handle up to
twenty passengers in various levels of luxury. He'd pulled most of the crew
quarters in order to fill their empty spaces with industrial replicators,
storage, an expanded sickbay, and a backup micro fusion reactor originally
designed for a tug since Phoenix hadn't had one.

He'd kept the captain's quarters for himself, along with a couple
bunk rooms in case he picked up passengers or potential crew in the future.
He'd even kept the hot tub, though he'd done away with the small pool and extra
refreshers. Two was all the ship really needed anyway.

Still, Phoenix would never be a purpose built naval vessel and he
knew it. He'd added mil-spec hardware wherever possible but hadn't had the time
to do a keel up rebuild before he left Antigua.

Even if he had, there wouldn't have been much space to add much
more. Weapons for instance were a wishful thing. The ship was just too tiny to
have any on-board. He'd compensated by overhauling her hull, shields and
engines. She was now blistering fast in sublight, with the shields of a
destroyer. He hadn't had enough material to completely armor her skin, but he
had managed to cover her vitals and he'd also added a layer of smart paint on
top of that. Unpowered it looked like flat battleship gray hexagonal panels on
the ship. Powered up it would give the ship some stealth ability.

The ship looked like a bird of prey, he liked having the flat gray
and black top with navy gray underneath, it added a sense of style to the ship
that the solid gold had somehow lacked. There was such a thing as too much
ostentation and glitter after all. Unfortunately he'd run low on supplies, much
of the underside and the engines were still a dull gold.

The bulb on her nose that housed her gravitics array and main
sensor array seemed to make her look like a real water born animal, beautiful,
and sleek. She was triangular in shape, but with a nice curve to her hull.
Nestled between her four nacelles were her sublight engines. A pair of powerful
Smythe engines he'd turned into hybrids in order to juice up their power curve.

Of course adding more power didn't come without cost. At full
power the sublight engines ran through the small fuel supply in half their
usual time. He'd also had to beef up the superstructure in order to keep up
with the strain... and overhaul the inertial dampeners. About the only thing
left stock on the ship now was the life support system and captain's cabin.

One thing he wanted to do was rebuild her tiny shuttle bay. He had
just enough room for an MMU and his fleet launch and no more, not even a tiny
hull bot. Getting in and out of the shuttle was a pain. Servicing the little
shuttle was incredibly difficult. Many of the bots couldn't do it, and he had
been forced to crawl under her a few times, and crawl on top of her with less
than three centimeters between his body and the ceiling. Replacing parts had
been extremely difficult. In the end he'd ended up waiting until he'd arrived
in Epsilon space, then suiting up in his skin suit and opening the bay doors in
order to get the job done.

Still Phoenix wasn't what he wanted, but for now she was what he
needed. The distinction had been made plain to him on the first jump. A larger
ship would have required even more crew... he had to admit even he was running
a bit ragged with Phoenix and the never ending chores that needed to be done to
keep her running smoothly while in flight.

Hopefully he would be able to retire her soon or at least turn her
over to another crew... if his hunch panned out.

It had taken several months jumping between and then passing
through the two empty systems, but the AI had it down now. He had been tempted
to take the secondary jump from B449b to the cul-de-sac system of New Andreas,
but had changed his mind. He had no intel on the system; apparently no one had
bothered to go to it in centuries. That alone said a lot, so he passed it by as
well.

Instead he'd continued his journey, heading south through the
system. But there he'd been forced to make a choice. Initially he'd planned on
going to the B448c system. It would be quicker journey, but their lengthy
crossing and lack of refueling in the past two jumps made him leery about
crossing yet another empty system to get to their intended destination without
some sort of reserve in the tanks. He was an engineer, caution was in his
blood.

He'd decided with a little regret to change his plans and
reluctantly set course to the Centennial jump point instead of the empty B448c
system he'd originally planned on jumping too.

B448c was an empty system, a side chain routing around Centennial
to Epsilon Triangula his intended destination. But his need for fuel and a
possible safe place after exiting hyper... not to mention social contact drove
him to change course.

Centennial had been a risk, he knew that they had been terrified
of the pirates and might remember him. When he made the stop in Centennial to
refuel he had been on high alert. But the planet was torn up even more than
before, no one had responded to his hails. He had been forced to use his
shuttle to land near a northern lake and ferry bladders of hydrogen up to his
ship. The echoing quiet of the planet disturbed him. Wherever the people
were... if they were still alive... he shook his head. Living in a cave fearing
the sky was no way to live.

He'd left a micro satellite in orbit and another in the outer edge
of the system. The satellites would keep tabs on any ships that did come
through and visit the system. Hopefully a friendly ship would come by sometime
to strip them of that essential data.

In Gaston he'd planned a stay for a month but it turned into six
weeks, he couldn't hide how grateful he had been to hear the warm female voice
on the other end of the radio. He'd discovered much to his dismay that several
freighters had passed through from Pyrax since his exile, the last one only a
week after he arrived with word of his troubles and a reward for his return to
Pyrax. He'd been working on a care package while helping the colony. He'd used
the shuttle to clear some of the orbital junk, picking through the materials
and bringing them on-board to use as raw material for his replicators. He'd
kept mute when the freighter had passed on its way up the chain to Centennial.

He'd had a hell of a time setting the record straight with the
colony leaders. The Mayor hadn't liked it, but his recordings had helped him.
Also the testimony of Jerry Smyth the blacksmith, Mcvine the Relgarth, the
elderly T'clock queen Rosepetal, Miss Fera Pine, and the Delgado family helped
tip the balance in his favor. The Delgado's in particular remembered the
admiral and his generosity the last time he'd visited on Io 11.

Irons left a copy of the holo of confessions with the Delgado's,
and with miss Pine who seemed to have a crush on him since their last
encounter, along with T'clock clan for safe keeping. He knew they would try to
keep his name clear. A budding reporter also asked for a copy so after
listening to Sprite's cautious advice he had allowed her to make a copy as well
as a copy of some of the other events in his recent history.  She'd even talked
him into giving the reporter a series of microcomputers.

It was a busy month, he'd made up for the months of shipboard
rations and lack of human contact by upgrading the local doctors, giving them a
copy of every medical text he had. He was frequently invited to eat; he
graciously accepted them when he had time. He also took the time to teach Jerry
the blacksmith how to make surgical tools. They were simple things, forceps,
retractors, and other things, but they were a start. He also handed the
blacksmith a small replicator and solar blanket and taught him how to use it.
Jerry had ended up working with the Relgarth and T'clock on starting a factory.
He wished them well on the project.