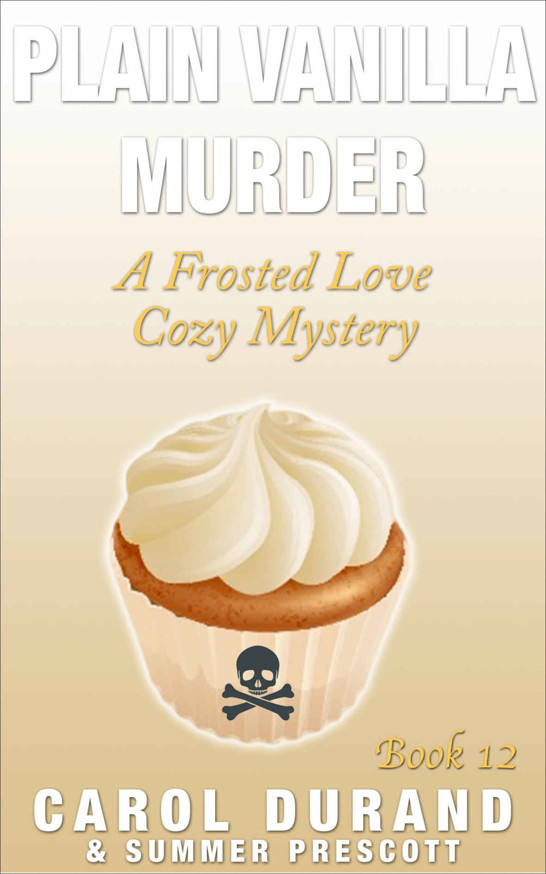 Every two weeks you’ll get a new Cozy Novella from me
absolutely FREE.

Disclaimer: This is a work of fiction.
Names, characters, businesses, places, events and incidents
are either the products of the author’s imagination or used in a fictitious
manner. Any resemblance to actual persons, living or dead, or actual events is
purely coincidental.

All rights
Reserved. No part of this publication or the information in it may be quoted
from or reproduced in any form by means such as printing, scanning,
photocopying or otherwise without prior written permission of the copyright
holder.

Melissa
Gladstone glanced at her watch repeatedly as she waited for a slow-moving train
to pass. Sighing at the inconvenience, she started at the rusty,
graffiti-covered cars as they clanked and creaked by so slowly that Missy was
certain she’d be able to walk faster than they were moving. Her daily routine
varied little, and a hiccup like this unsettled the conscientious owner of two
cupcake shops probably far more than it should have.

She
began every morning by taking her two furry friends, a golden retriever named
Toffee and a malti-poo name Bitsy on a vigorous walk to the park, then after
her breakfast and shower, she headed immediately to the first of her two shops,
Missy’s Muffins and More,
in LaChance, Louisiana. Once she’d established
that all was well in the LaChance store, it would be time to drop in on her
second location,
Crème de la Cupcake,
in the neighboring town of
Dellville.

The
spunky blonde’s best friend, Echo Willis, owned the vegan ice cream shop across
the street from
Crème de la Cupcake
, so Missy often ended her days
there, conversing with her free-spirited “partner in crime” who had moved to
Louisiana from California last year. Evenings were usually spent in the company
of the incredibly handsome LaChance detective, Chas Beckett. When she really
stopped to think about it, life for Missy Gladstone was pretty close to
wonderful, a fact that she had to remind herself of while sitting behind the
flashing red lights of the railroad crossing.

After
what seemed like an eternity, but in reality had only been more like seven
minutes, the red and white striped railroad gates finally started rising
slowly, and Missy’s little blue car bumped over the tracks, crawling behind the
traffic that had built up at the crossing. The manager of
MM&M
,
Cheryl Radigan, was waiting for her in the commercial kitchen when she arrived,
looking perplexed and holding a slip of paper.

“Hey,
Ms. G.,” Cheryl greeted Missy cheerfully. “I just took this message for you.
The woman was talking so fast, and there was so much noise in the background
that I couldn’t really understand what she wanted, but I think it had something
to do with the catering we did for
Whispers of Blood
when they were
filming in town,” she guessed, handing her boss the message slip.

“Thanks,
Cheryl,” Missy murmured, glancing at the paper. “That’s really strange…I wonder
why they’d be contacting me,” she mused. The horror movie
Whispers of Blood
had
been filmed on the outskirts of LaChance a few months ago, and Missy had
prepared cupcakes for the cast and crew on a daily basis, but all accounts had
been settled long ago. “How are we doing on deliveries?” she asked, getting
down to business.

“We’re
good to go – everything is boxed and loaded into the truck. Grayson will be
handling the counter while I do the deliveries, the baking is all caught up so
that we have plenty of stock, and the supplies have been ordered,” the
resourceful young woman replied, double-checking the list of to-do items on her
phone.

“Wow,
somebody’s been busy this morning,” Missy observed, pleased. “Great job. I’m
going to hole up in my office to wade through some paperwork, and to make this
phone call. Tell Grayson to come get me if things get crazy,” she instructed,
heading down the hall.

“You
got it,” Cheryl nodded, rummaging in her purse for the keys to the delivery
truck.

Missy
plopped into her ancient brown leather office chair that had the look and feel
of a well-worn baseball glove, and dialed the California phone number that was
on the message.

“Francesca
Childs’ office, how may I help you?” a voice on the other end of the line that
sounded very young, bored and Californian inquired. Missy gave her name, said
that she was returning a call from Francesca, and waited, listening to smooth
jazz, while the receptionist connected her.

“Melissa,
sweetheart, how are you?” a nasal New Yorker demanded, without waiting for an
answer and launched into a fast-paced monologue that left Missy’s head
spinning. “So anyway, Ian Carson was a good friend of mine and he couldn’t stop
raving about how fabulous you are and how great you’d be on camera, and he
insisted that your cupcakes were a little piece of heaven on earth,” Francesca
explained, not even pausing for breath. Missy winced a bit at the mention of
Ian’s name. He was a Hollywood A-list actor who had befriended her while
filming
Whispers of Blood,
and he had been tragically murdered on the
set. “So here’s the deal, honey…I’m in the process of looking at candidates for
a new reality show that’s all about baking. We need someone quirky and fun and
Ian spoke so highly of you that, naturally, you were my first choice. I’m going
to need you to come out to L.A. for an audition and a screen test as soon as
possible. The studio will pick up the cost of your travel and accommodations of
course, and we’ll provide you with a daily stipend while we evaluate your
readiness for hosting your own baking show. Whaddya say, Melissa?” she asked,
finally.

Missy’s
head swam with a combination of information overload, and the enormity of what
was being proposed. “Umm…I have some questions actually,” she began, feeling a
bit steamrolled.

“Shoot,”
Francesca ordered. Missy could hear the tapping of computer keys in the
background.

“Umm…okay,”
she faltered a bit, not quite knowing where to begin. “So…are you a casting director?”
she asked.

“Producer,”
was the abrupt answer. “Next question?”

“Oh…well…I..,”
Missy floundered a bit, overwhelmed. “I really hadn’t heard anything about a
baking show. Could you give me some more information as to what it’ll involve,
and what would be expected of me? I really don’t know what I’d be getting
myself into.”

“Well,
doll, you won’t be getting yourself into anything if we can’t at least agree on
an audition date. Let’s get that set up, see if you’d be a good fit for the
show, and we can hash out details once we get to that point. At any time during
the process, if you’re not feeling comfortable or you decide that you don’t
have what it takes to host your own baking show, we’ll just say our goodbyes
and leave it at that. So, I’ve got an opening on Friday, can you make it?”
Francesca asked as though it were a foregone conclusion.

Missy
swallowed hard. “Friday? Wow, that’s really soon…can I take a look at my
schedule and get back to you?” she asked, feeling somewhat faint.

“Here’s
what we’ll do, honey,” the producer spoke slowly, sensing Missy’s reticence.
“I’m gonna go ahead and book that slot for you on Friday. You look at your
schedule and see if there’s anything in there that might prevent you from
keeping an appointment that could very well give you the job of your dreams and
set you up financially for life, and call me if you can’t make it. You can fly
out on Thursday – what airport would you like to use?”

“Uh…New
Orleans,” Missy replied, feeling as though she were dreaming.

“Perfect,
sweetheart. My assistant, Roger, will hook you up with flight and hotel
reservations, as well as a driver to get you to the studio. He’ll email you the
details along with his cell number in case you need anything, and I’ll look
forward to seeing you on Friday, alright babe?”

Missy
almost giggled. Babe? How very Hollywood. She agreed, feeling as though she
didn’t have much of a choice, and hung up the phone in a daze.

Missy
had no earthly idea what one wore to an audition or a screen test, but she was
quite certain that her current wardrobe was woefully inadequate. She tossed
outfit upon outfit onto her bed, finding some tragic flaw in each item of
clothing as Echo watched with amusement, sipping a glass of Cabernet.

“For
someone who still isn’t sure about whether you should even be going or not,
you’re awfully concerned about first impressions,” her friend remarked,
reaching down to stroke Toffee’s silky golden ears, while Bitsy snoozed
peacefully in her lap.

“This
whole thing is crazy,” Missy folded her arms and shook her head, surveying the
tornadic mess on the bed. “Who am I to even think about having my own TV show?
I’m not qualified for this. What if I make a fool of myself?” she worried,
going to the closet to rifle through the remaining items.

“Seems
to me that quite a few people on TV make a very good living by being unafraid
to make a fool of themselves,” Echo observed dryly.

“Yes,
but I certainly don’t want to fall into that category,” Missy shot back,
flinging hangers aside one by one. “I know nothing about any of that Hollywood
stuff. I’m an ordinary cupcake artist from Louisiana.”

“Which
is apparently exactly what they’re looking for,” her friend reminded her
gently. “Just go out there and have a good time. Enjoy the first class plane ticket
and luxury hotel, and if they don’t choose you, just be glad that you had a
free mini-vacation,” she advised, taking another sip of wine.

Missy
stopped her frantic search for the perfect outfit and turned to face her
laid-back friend. “You know what? You’re right! Why should I be so worried
about what they think when I already have everything I’ve ever wanted. If they
don’t choose me, I’ll just come back here with a fun story to tell, and be able
to fall right back into my wonderfully ordinary life,” she nodded, smiling for
the first time since she spoke with Francesca Childs.

“Exactly!”
Echo exclaimed, raising her glass. “Now choose a few outfits and throw them in
the suitcase so that we can go order pizza and watch our movie,” she directed,
eager for girl’s night to begin.

“So,
how are you feeling about the prospect of becoming a TV star?” the
tall-dark-and-handsome Detective Chas Beckett teased, as he drove Missy to the
airport.

“I
don’t think there’s much chance of that,” she replied with a grin. “But, if it
happens, I’ll have you to keep me humble.”

“It’s
a dirty job, but somebody’s gotta do it,” he winked and squeezed her knee
affectionately. “Are you nervous?”

“Terrified,”
Missy confessed. “It’s not that there’s a lot at stake – I’ll be perfectly fine
if they choose someone else, but the thought of getting in front of a TV
camera, with everyone focused on me, gives me the heebie-jeebies.”

“I
can see how that might be intimidating,” Chas nodded. “Just try to forget about
the camera. When they ask you to say something, just pretend you’re talking to
me and that I’m right behind the lens. I’ve handled press conferences that way
for years,” he admitted, shrugging.

“Good
idea,” she agreed, feeling butterflies fluttering in her stomach as they pulled
up in front of the terminal. Kissing Chas goodbye, she headed for the ticket
counter.