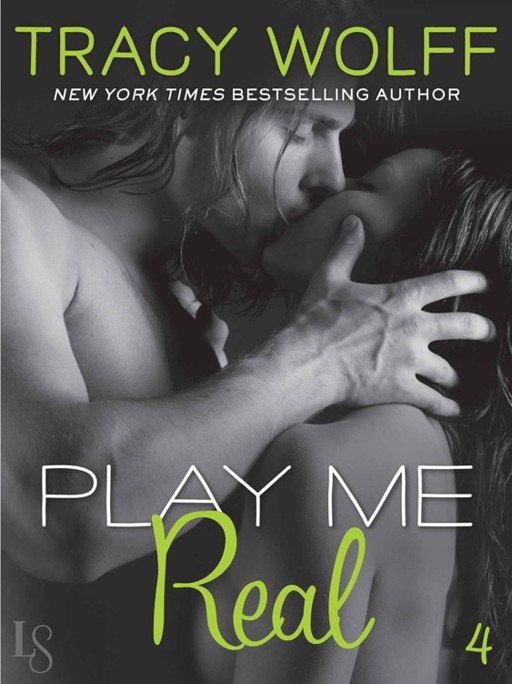 Play Me #4: Play Me Real
is a work of fiction. Names, places, and incidents either are products of the author’s imagination or are used fictitiously. Any resemblance to actual events, locales, or persons, living or dead, is entirely coincidental.

L
OVESWEPT
is a registered trademark and the L
OVESWEPT
colophon is a trademark of Random House LLC.

Janet is still screaming at Sebastian and he’s still just standing there, taking it. His face is completely blank and it’s too dark to make out his eyes, but I’m betting there’s no reaction in them anyway. I can tell that he’s totally shut down, his whole body collapsing in on itself—which just makes this whole thing even more surreal.

“Janet,” I tell her, wrapping an arm around her waist as I try to guide her toward her apartment. “Getting this upset isn’t good for you. Let’s get you back to your apartment—”

“Stay away from her!” she yells at Sebastian, totally ignoring my attempts to budge her. Usually she’s pliant with me, so I’m a little shocked at how strong she is—how easily she’s holding her ground. “Don’t you come near Aria! Don’t you dare come near this sweet girl.”

“Sorry doesn’t mean anything!” She’s still clutching her beer bottle and she flings it at him now, warm beer splattering all over me and the pavement between us in the process.

Sebastian doesn’t duck, doesn’t try to deflect the bottle in any way. Instead, he lets it hit him right in the chest. We both watch as it bounces off him, falling to the ground at his feet and shattering.

It’s the sound that does it, I think. The desperate tinkle of broken shards raining down against the dirty pavement. Janet stares at the detritus for long seconds, then seems to lose control of herself. Her legs give out, her whole body crumpling like her bones have disintegrated. Like she just doesn’t have the strength to hold herself up for one second longer.

I catch her before she goes down, her body slamming into mine, knocking me off balance. We nearly go down in a tangle of arms and legs.

He steps back like he’s been burned, hands raised in obvious surrender. I don’t blame him. Janet is way far gone, totally out of it as she screams and sobs against my neck.

“I’m sorry,” I tell him. “She’s really drunk right now. I’m just going to get her to her apartment, get her settled.”

He’s in almost as bad shape as she is. I don’t know how I know that considering how self-contained he is, but I do. I can feel him breaking, can feel the memories stretching between him and Janet like a deep cavern.

I want to reach out to him, to press a hand to his shoulder, a kiss to the vulnerable underside of his jaw. But it’s taking all my strength to keep Janet upright on my own and if I move the wrong way, I’m afraid we’ll both go down. And I’m not sure if I’ll be able to get her back up.

“Come on, Janet. Let me get you inside,” I murmur, stroking her hair softly as I start an awkward, crab-like shuffle toward her apartment.

She doesn’t fight me, thank God, but she doesn’t help me much, either, so it takes twice as long as it usually does to get her to her apartment.

Once we’re there and I’m fumbling with the doorknob—it’s unlocked, thank God—I cast a look over my shoulder at Sebastian. He’s still standing in the exact same spot, shoulders tense, fists clenched, face a mask of torment.

And though I want to comfort him, there’s a part of me that’s wary as well. With my background, I’d be an idiot if I wasn’t concerned.

But that doesn’t mean I believe he’s a murderer, as Janet claims. Sebastian might be dominant and controlling and always wanting to be in charge, but he’s also a fair, decent, caring guy. I’ve seen that myself numerous times this week as well as heard stories from Michael and a couple of the other bartenders about good things he’s done since being back at the Atlantis. I have a hard time believing he would deliberately hurt anyone.

“Stay away from him!” Janet shrieks at me. “He’ll hurt you, too! He hurts everyone—”

“Janet, stop!” Her door finally opens and we all but fall inside.

I drag Janet over to the couch, get her situated on it. She’s crying now, great, gasping sobs that hurt to hear.

Her grief is so raw that it seems an intrusion just to witness it. So after a moment, I walk into the kitchen and pour her a glass of water. Then I put the teakettle on to boil water, taking one of the tea bags I brought down earlier and putting it in the one clean mug I find in her cabinet.

Her sobs are quieting. Not stopping, not slowing down, but at least the harsh, violent sounds have eased up. When I glance through the kitchen doorway at her, she’s got one of the pictures of her and her son clutched to her chest.

My heart sinks a little more. Please, I whisper inside my head. To God, fate, the universe itself. Please don’t let Janet’s son be dead. And please don’t let Sebastian have had anything to do with what happened to him if he is.

It’s a futile prayer—I know that even as I make it.

And still I pray. That it didn’t happen. That there’s an explanation. That I haven’t let myself fall for a man who is no different, no better, than the father I have spent so many months running away from.

The teakettle finally starts to whistle, and I grab it quickly. I forget the pot holder and burn my hand on the handle, but at this point I don’t even care. I just want to get Janet settled and get the hell out of here. I can’t think in here, can’t breathe. I need to get away from all this pain and grief and horror—it’s swamping me, pulling me under. Bringing back everything that happened fourteen months ago until I’m one small step from curling up on the couch and keening in sorrow myself.

After I make the tea, I carry it and the glass of water to Janet. Put them on the end table next to her. And then sit on the couch by her side and pull her into a hug. How can I not? She’s devastated, broken, tears slipping slick and silent down her face as we rock gently back and forth.

“It’s okay,” I tell her, running a soothing hand down her back. “Everything’s going to be okay.”

“Nothing’s ever going to be okay again,” she tells me in a dull and terrible voice. “Dylan’s dead. He’s dead and not even all the money in the Atlantis’s vault is going to change that. He’s dead and Sebastian Caine killed him as surely as if he put the gun to his head himself.”

Her words send a chill through me because I know what it’s like—I know powerful men who kill with a word instead of a gun. An order to an underling that gives them the illusion of keeping their hands clean.

But Sebastian’s not like that, I remind myself. He’s not like my father, not like Carlo. I don’t have much to hang on to in the middle of all this misery, but I have that. It will have to be enough for now.

“Dylan was a good boy,” Janet says, pulling away from me to stare blankly down at the picture she is still clutching. “He had his problems—all teenage boys do—but he had a good heart. He didn’t deserve to die like that. Beat unrecogniz

able, body thrown in a ditch by the side of the road like garbage. He didn’t deserve to die like that.”

No one deserves to die like that. Most people who come here see only the glitz and the glamour, the bright lights and the money. Always the money. But what they don’t see is what people do for that money. How they lie and cheat and steal and smuggle for it. How they kill for it—and die for it.

“No,” I tell her, lifting the mug of tea and pressing it into her free hand. “No one should die like that.”

“He wasn’t perfect,” she tells me. “But neither was Sebastian, even though everyone thought he was. Everyone thought Dylan was the troublemaker. But Sebastian is Richard Caine’s son. And that man doesn’t have an innocent or decent bone in his body. The apple never falls far from the tree, Aria. Sebastian Caine is just like his father—a cold, brutal, evil man who will do anything for money. Anything to get his own way.”

Her words hit me like blows, send icicles skating down my spine, through my veins. There’s a part of me that’s screaming no. It’s not possible. This is Sebastian. He’s a decent guy. He’s nothing like Janet describes.

But there’s another part of me that wonders…that has to wonder. Because anyone meeting my father would think he was the kindest man in the world. Little would they guess just how much blood and violence and misery he has on his hands.

“Dylan was the class clown,” Janet tells me as she drinks her tea, eyes far away from this couch, this apartment, this moment. “I was always getting notes or phone calls from teachers because Dylan had pulled a prank or started a rebellion in the cafeteria or had the whole class cracking up during some lecture or other.

“He was sweet and adventurous and yes, he made bad decisions sometimes. He drank too much, gambled too much, dabbled in drugs even though I told him not to. But he’d been running with Sebastian for years—since childhood, really, when I worked at the Atlantis and they became friends—and Dylan always felt like he had to keep up. Had to do what Sebastian did. Except he didn’t have the money. Or the rich father to bail him out.

“He only had me and I wasn’t enough.”

She lets go of the picture then, and it falls to the floor at our feet. I try to catch it but I’m not fast enough and a crack runs straight down the center of the glass.

Janet’s too caught up in the pain and the memories to notice, and I make a mental note to stop on the way to work tomorrow and buy a frame to replace the broken one.

“You should sleep,” I tell Janet, gently prying the empty mug from her fingers. Her words are slurred, her eyes nearly swollen shut from all the tears. I start to say that she’ll feel better in the morning, but that’s a ridiculous thing to say. Her son is dead. It’s not like the morning will suddenly make that truth easier to bear.

So do I. Terrible nightmares about those three interminable days—and the bloodshed that came after them. But— “Tiring yourself out will only make the nightmares worse. If you don’t get some sleep now, it’ll be twice as hard later.” I know, from bitter, bitter experience.