Play On: A Glasgow Lads Novella 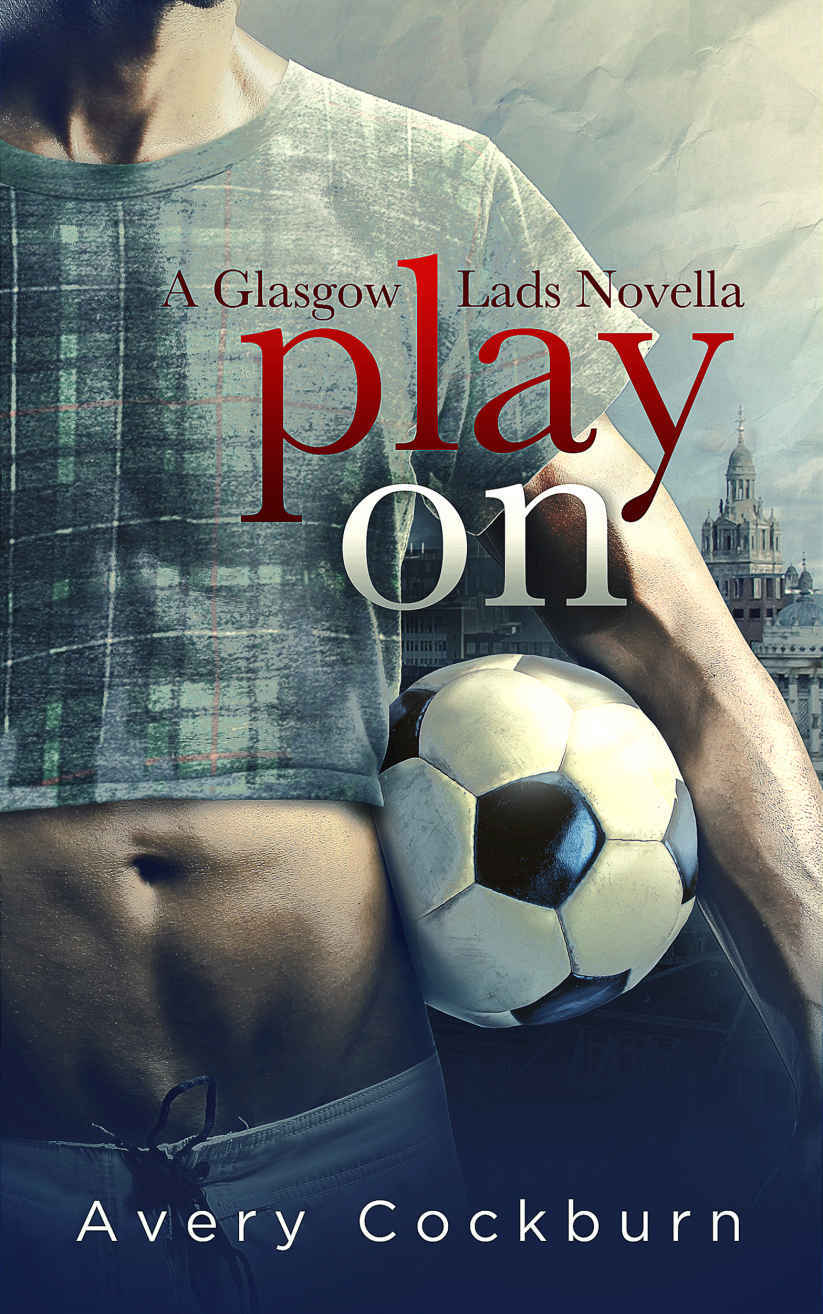 Playing for Keeps - Chapter One

Copyright © 2015 by Avery Cockburn. All rights reserved. This is a work of fiction. Any resemblance to actual persons living or dead, businesses, events or locales is purely coincidental. Reproduction in whole or part of this publication without express written consent is strictly prohibited.

Want more Warriors all to yourself? How about exclusive bonus material, including early sneak peeks at the
Playing to Win
weeks before its September release?

Play On: A Glasgow Lads Novella

A tale of pride over prejudice on the soccer pitch kicks off this gay romance series set in Scotland.

Duncan Harris is on the edge. Scandal has shredded his LGBT soccer team’s history-making season, and now the once-unflappable striker is lashing out. Only one person can tame Duncan’s rage and make him feel like himself again…

Bullied by schoolmates in his wee village, Brodie Campbell lurked deep in the closet before coming to the city of Glasgow. Here at university he’s out and proud, but the years of abuse have left him emotionally paralyzed. Can flatmate Duncan help Brodie escape his past and heal his wounded heart?

As the two lads grow closer, Brodie can’t forget how athletes like Duncan once tortured him. When Duncan attacks an opponent who threatens Brodie, the situation escalates. Soon Brodie doesn’t feel safe anywhere—especially in Duncan’s arms.

To those who’ve survived the bullies, and to those who
will
survive.

Duncan Harris tasted them all at once, yet he kept running, kept driving for that mad round leather ball. After ninety-plus minutes of play, his natural strength had long abandoned his limbs. Now his only fuel was rage.

Down by four goals, the Woodstoun Warriors had no hope of victory, but if Duncan could score now, near the final whistle, his team could walk out of here today with a scrap of pride. They could give their legion of drizzle-damp, rainbow-flag-waving fans something to cheer about. They could silence the haters—at least for a moment or two.

But their opponents kept possession with a series of leisurely passes, savoring their shocking upset that would send them to the semifinals. In their smug certainty of victory, they’d finally stopped taunting the Warriors with words like
fairy
,
faggot
,
bufty
, and
poof
.

Focus,
Duncan commanded himself.
For one more minute. Just focus.

An idea struck him then. With nothing to lose, he came to a halt and let his body go still. His arms dropped to his sides, his feet stopped shifting, and his weight went back on his heels. Finally his shoulders slumped in utter submission.

His charade worked. The opposing winger’s next pass was a fraction slower than the ones before it. Duncan sprang forward, snagging the ball on his right instep. With a quick pivot, he was off on a breakaway.

A few steps later, he realized he’d surprised his own teammates as well. No one was flanking him to receive a pass. No one possessed his speed. This task was his alone.

As he sprinted down the pitch, the roar of the crowd faded until he heard nothing but the huff of his own breath and the pounding of his feet against the wet turf.

A flash of blue and yellow told him a defender was approaching. Duncan faked a lunge to the left, forcing the fullback into a wide stance. Then he poked the ball straight through the defender’s legs, zipped around him, and picked up his own pass.

It was Duncan versus the goalkeeper now. The keeper rushed forward through the penalty area to cut down the angle, but with a nimble stutter-step, Duncan left him looking as stationary as a foosball figure.

From that point, a five-year-old could’ve scored. Duncan could’ve walked the ball in, or given it a gentle tap—or fuck’s sake, just let it roll in of its own momentum. But his mind betrayed him.

Evan would have been so proud of that play. You just showed the world why he chose you, why he fought for your place in the team. If only he were here to see it.

That’s when the rage returned. Duncan yanked back his foot, slammed the shot with all his might—

—and booted it straight into the crossbar.

The ball ricocheted into the arms of the keeper, who swiftly spun and punted it far down the pitch. Ears ringing, Duncan stared up at the crossbar, which still shook from the impact of his shot.

Duncan turned at the sound of the keeper’s yell. Near the Warriors’ goal at the other end of the pitch, the opposing striker was knee-sliding toward the corner flag, arms raised in triumph. A moment later he disappeared beneath a swarm of bouncing, hugging teammates.

“What the—” A glance at the scoreboard told Duncan their opponents had just added their sixth goal.

The final whistle blew. All at once, Duncan was slammed by the pain of a dozen cuts and bruises, and the exhaustion of a ninety-minute battle with futility. He sank down against the goal’s near post until he felt the cold, wet artificial turf under his shorts. Then he put his head in his hands, covering his ears to muffle the noise of the crowd.

It’s over.
Despair flooded his veins. The months of sacrifice—dawn runs, sore muscles, bored boyfriends who couldn’t tolerate Duncan’s early Friday-night bedtimes and demanding practice schedule—all would’ve been worth it if they’d won.

Duncan looked up to see the opposing goalkeeper extending a hand. He wanted to sit and sulk, but he grabbed hold anyway, for the sake of sportsmanship. The keeper pulled him to his feet, his ribbed glove rasping against Duncan’s scraped palm.

“Don’t be sorry,” he told the keeper. “You were the better team today.” It was true. Their opponents had shredded them—physically and mentally—when they discovered the Warriors’ hearts had been ripped out minutes before the match began.

“Aye, we were better, for once.” The keeper flashed a disbelieving grin, which he promptly muted. “I meant, I’m sorry about your captain. He’s a right shit for what he did.”

The goalkeeper shook his head as he jogged away to join his teammates, who were hugging and whooping at the other end of the pitch. Duncan turned to applaud the fans in the stands, where he saw his friend Lorna at the fence. She and her boyfriend, Paul, along with the rest of the Rainbow Regiment, were still brandishing their banners and flags. Still proud.

He waved at them, searching the crowd for a face he knew he wouldn’t find. His friend Brodie hated football, and besides, he’d gone home for spring vacation. But after what had happened the last time they’d seen each other, Duncan hoped Brodie would change his mind. Maybe he’d take the train back to Glasgow for the day. And the night.

Duncan turned back to join his teammates, ready to console and commiserate. They’d been eliminated from this tournament, but there were still six regular-season matches to play. They were on track to place second and be promoted to the amateur Premier division—a first for an all-LGBT team. It could still be a successful season. It had to be.

The Warriors were scattered across the pitch like chess pieces after an abandoned match, each man or woman alone. Some hobbled about in a daze, some sat and stared into the distance, some lay flat on their backs, drained of strength and hope. Duncan saw his own heartbreak reflected in each sweat-streaked, tear-stained face.

One day, he knew, they’d rise together. But tonight, they were falling apart.

Pulling back his rain-soaked hood, Brodie Campbell scanned the ground floor of the University of Glasgow library with a growing dread. On the first morning after spring vacation, the place was pure crammed. “Christ A’michty, fit a madhouse,” he muttered.

“Told you we should’ve come earlier.” Lorna dragged him toward the closest lift, which was opening just now. “C’mon, there’ll be seats upstairs—I hope.”

They squeezed onto the lift amid a flood of sodden, desperate-looking students. One week before exams, the air buzzed with anxiety.

Brodie wished his own tension were merely academic, but his mind was preoccupied with the inevitable moment he’d see his friend Duncan again for the first time in three weeks. The first time since their disastrous, drunken hookup the night before vacation.

On the lift’s rear wall, someone had stuck a sign handwritten in a red marker:

“It’s survival of the angriest during revision period.” She swiped a drop of rain off the tip of her nose. Her phone beeped. As she pulled it out, her long, dark hair hid the screen from Brodie’s view. “Oh!” She lifted her head and called out, “Level Two, please.”

The lift filled with groans. “You couldn’t use the stairs?” asked a brawny lad standing near the door.

“Just press the button, ya dobber,” Lorna said. “My mate here is ill.”

With shouts of alarm, everyone backed away from Brodie—as much as they could in the cramped space.

“I’m not ill.” His face heated under the hostile gazes. “I mean, I’m not contagious.”
Not the airborne sort of contagious.

The doors opened, saving Brodie from further explanation. He followed Lorna out into the study area, which was as crowded and chaotic as the one on the ground floor. “Thanks for embarrassing me,” he told her. “Soon someone’ll post a warning on
Spotted
—‘Beware the lad in a gray hoodie spreading plague.’”

“No doubt.” Lorna surveyed the tables before them. Conversation was allowed on this level, so the volume of chatter was high. “You shouldn’t read that stupid site anyway. It’s a disaster.”

“I read it
because
it’s a disaster.” Brodie pulled out his phone to check the
Spotted: Glasgow Uni Library
Facebook page. The site was already filling with the usual anonymous complaints and come-ons. Also, someone had posted a new photo of Clyde, Level Ten’s resident mouse. “Besides, we’re psychology students, so it counts as research.”

He nudged Lorna as they began their search for empty seats. “Listen to this post. ‘To the Hugh Jackman lookalike who sits by the Level Four keyboards: get your claws out and rip my clothes off. Please.’”

“Could be a he. Here’s another. ‘To the beautiful lad in the Passenger T-shirt: I can’t wait to give you another ride. Next time, I promise we won’t crash.’”

Loss by Tom Piccirilli
Drinking With Men : A Memoir (9781101603123) by Schaap, Rosie
Second Sunday by Michele Andrea Bowen
Jacob's Way by Gilbert Morris
Hypnotized by the Billionaire by Gemissant, Winter
A Rogue for All Seasons (Weston Family) by Lindsey, Sara
The Secret Manuscript by Edward Mullen
A Chance of Fate by Cummings, H. M.
Immortal Champion by Lisa Hendrix
The Poisoned Pawn by Peggy Blair