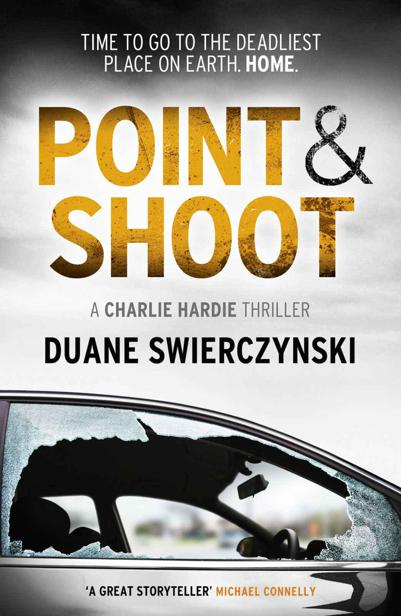 SPECTACULAR PRAISE FOR DUANE SWIERCZYNSKI AND THE CHARLIE HARDIE SERIES

‘The premise may be absurd, but it’s good enough to propel the breathless action scenes that make Swierczynski’s cinematic novels so much fun to read – on the couch or on the run.’

‘A hip, dead smart novel, an entertaining start to what promises to be an addictive action trilogy’

‘Harks back to those days when the situations were dire but the delivery was light, in the best possible way. A terrific read’

‘Charlie’s internal voice is fun to follow and the action sequences are killer. I could easily see these books as a major summer blockbuster. The book goes from action to action, rarely stopping to catch a breath, and I stayed up late one night turning the pages to the end. If non-stop, cool action sequences with fun characters are your thing, you need to read some Swierczynski stories.’

‘A high octane, cinematic delight that uses film techniques of fast pace and quick cuts and highly visual scenes to rivet the reader to their chair. I loved it’

‘The compelling premise pulls all our paranoid strings, and Swierczynski, like a mad scientist twirling dials, ratchets the tension ever tighter … Stay tuned for part three of what may be the most unusual thriller series in a long, long time.’

‘Duane Swierczynski is a much-needed breath of fresh air in the book world … This guy is a great storyteller.’

‘The tale packs enough indestructible villains to satisfy a
Die Hard
fan, and each chapter ends on a cliffhanger … Written in deadpan sentences and funny as can be, this first installment of a projected trilogy left me greedy for more.’

‘A furiously paced tale that cries out to be filmed … such breathless enthusiasm and good humour that it is easy to settle back and devour the book in a single go. Great fun.’

‘Duane Swierczynski puts the rest of the crime-writing world on notice. So learn to spell the last name. He’s going to be around for a while.’

‘Duane Swierczynski has ideas so brilliant and brutal that one day the rest of us will have to tool up and kill him.’

‘I guarantee you won’t want to put it down until its dénouement … Infectious and highly recommended.’

‘Cracks along like many a reckless driver along Mulholland Drive itself’

‘A mile-a-minute crime thriller – fearless, funny and utterly accessible – fit to leave you breathless by its last, explosive moments.’

‘Swierczynski has an uncommon gift for the banal lunacy of criminal dialogue, [and] a delightfully devious eye for character.’

‘Duane Swierczynski is one of the best thriller writers in America, and probably my favorite.’

‘Swierczynski seems to get such a kick out of writing about eccentric crooks, it’s almost criminal.’

‘An audacious, propulsive thrill ride that kidnapped me on page one and didn’t look back.’

‘This book could not be more perfect.’

‘Brilliant … one hell of a rollercoaster read. Mr Swierczynski writes like Elmore Leonard on adrenaline and speed.’

‘Swierczynski’s style is muscular and very readable, pounding the rhythms of hard-boiled prose like he’s working a heavy bag.’

First published in Great Britain in 2013 by Mulholland Books

The right of Duane Swierczynski to be identified as the Author of the Work has been asserted by him in accordance with the Copyright, Designs and Patents Act 1988.

Spectacular Praise for Duane Swierczynski and the Charlie Hardie Series

Interlude with the Best Serial Killers Ever

Thanks and Praise: The Final Chapter

Read on for an extract from Fun & Games

And if you still can’t see the light

God’s gonna buy you a satellite

This isn’t going to have a happy ending
.

A
TWENTY-THREE-YEAR-OLD HUNGOVER
intern with a broken heart saved the day.

The intern’s name was Warren Arbona, and he was in a stuffy warehouse along with five other interns scanning endless pieces of paper and turning them into PDFs that nobody would ever,
ever
fucking read. The whole operation was strictly cover-your-ass. The interns’ bosses wanted to be able to tell their government liaisons that, yes, every page of the flood of declassified documents they released had been carefully read and scanned by an experienced member of their legal team.

“Experienced” = interns who’d been on the job for at least two months.

The new president had made a big deal about declassifying everything, the shining light of freedom blasting through the deceptions of the previous administration. A democracy requires accountability, he said, and accountability requires transparency. Which sounded awesome.

But before the PDFs could be uploaded, the president’s intelligence advisers insisted that no sensitive secrets harmful to the security of the United States would be leaked to the general public. This still was the real world.

So a white-shoe law firm specializing in government intelligence was retained to painstakingly review every line on every scrap of paper.

Nobody in the firm wanted to deal with that bullshit, so they put the interns on it.

And Warren Arbona, the intern in question, wouldn’t have noticed a thing if it hadn’t been for his cunt ex-girlfriend. He couldn’t help it. The name just jumped out at him.

He stopped the scan and looked at the paper again. Were his eyes playing tricks on him?

Nope. There it was.

No, it wasn’t Christy’s dad. Her dad was named Bruce or some such shit. Balding. Big asshole. Deviated septum and beady eyes. But this Charlie guy was an uncle, maybe? Some other relative? Warren had no idea.

And really, who the fuck cared. Christy didn’t matter anymore; he’d do best to put her out of his head and finish up with this scanning so he could go home and get good and drunk again.

They were all working inside the abandoned warehouse set of a canceled television show,
Baltimore Homicide
. The rent was absurdly cheap, and the set already had the delightful bonus of real desks and working electrical outlets, thanks to a subplot featuring a fake daily newspaper office.

So all the law firm had to do was arrange for the reams of paper—nearly three trucks’ worth—to be backed into the building, plug in a bunch of laptops and scanners, and then set the interns loose. See you in September, motherfuckers.

The working conditions were less than ideal. While an industrial AC unit blasted 60,000 BTUs of arctic air into the fake office via ringed funnels, the warehouse itself had diddly-squat in the way of climate management. So every time you left to drag in another set of files, you baked and sweated in the stifling summer heat. And then when you returned, your sweat was flash-frozen on your body. No wonder everybody was sick.

Warren had been fighting a cold since May, when he first started scanning the documents. He believed that if he polluted his body with enough tequila, the cold virus would give up and abandon ship. So far, it hadn’t worked.

But the tequila also helped him forget about Christy Hardie.

Now the name popped up, and Warren couldn’t help but be curious. He started to read the document, which was a deposition.

Warren kind of wished someone had snuffed Christy after she confessed that she’d been blowing his best friend for, oh,
the entire first year of law school
.

Anyway, Warren remembered the Lane Madden story from a bunch of years ago. Apparently she’d been raped and killed by this house sitter guy who used to be a cop and kind of lost his mind. But the rest of the deposition was kind of boring, so Warren stopped reading and fed the pages into the scanner. Yes, they were all supposed to eyeball each page—even the partners weren’t foolish enough to tell the interns to actually read them. But Warren and his colleagues dispensed with the
eyeballing
crap somewhere in late May. If fingers touched a page, it was considered read. Osmosis, they decided.