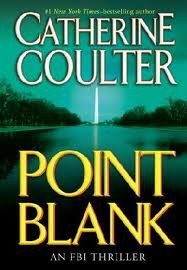 “A dizzying dash involving kidnapping, near-misses, murder, and a manhunt. Her readers are guaranteed a happy ending.”

“Full-blown intrigue…Coulter deftly orchestrates her fast-paced, intricate story threads and the disparate cases challenging her agents with a concertmaster’s touch.”

“Love in all its forms, some of which can be quite twisted, lies at the heart of this stimulating and gritty new thriller. Coulter’s FBI books have their own special style which, when added to the spine-tingling suspense, supplies edge-of-your-seat thrills.”

“I just got through reading Point Blank. Great book. The two plots were classic Coulter style, which I love. The way you throw the readers right into the thick of the action is so captivating and thrilling. Congratulations on the book.”

“I have just finished Point Blank…What a lovely attention-grabber that one was…Such a tricky way to track the evil ones. You do good, and I love every one of your FBI series.”

“Well, you did it again! You knocked my socks off with another great mystery, Point Blank.”

“You’ve done it once again. I didn’t get anything done because I picked up [Point Blank] first thing in the morning, and by bedtime it was finished. My husband almost didn’t get any dinner. He asked, ‘Is that book really that good?’ Yes, it was.”

“You did it again! Another great novel! I love the FBI series and all the characters. Keep up the good work. Your novels are great!”

“I just bought Point Blank yesterday and finished it this morning. All I have to say is that it was the best out of all the FBI series. I have read almost all of your books. It was so suspenseful that I had a hard time putting it down to go to sleep at three in the morning. I love Savich and Sherlock together; they make a great team, and I hope they are in more books in this series because I really enjoy them. Once again, incredible book.”

“Well, just this morning I finished reading Point Blank. You did a great job on that book. My thinking is that you are truly amazing. I look forward to whatever is next. Thank you.”

“All I can say is WOW!!! Point Blank is one of your best! The first chapter was so graphic and well written I felt claustrophobic as Ruth walked through the cave and I groped through the darkness myself. A wonderful story and a great read! Thanks again!”

“Oh, it was the best!…You kept me going, Ms. Coulter, you really did. Keep writing.”

Penguin Books Ltd., Registered Offices: 80 Strand, London WC2R 0RL, England This is a work of fiction. Names, characters, places, and incidents either are the product of the author’s imagination or are used fictitiously, and any resemblance to actual persons, living or dead, business establishments, events, or locales is entirely coincidental. The publisher does not have any control over and does not assume any responsibility for author or third-party websites or their content.

RUTH WARNECKI PAUSED to consult her map, even though she’d read it so many times it was worn and stained from use, with a smear of strawberry jam on one corner. Okay, she’d walked and crawled down this twisting passage exactly the 46.2 feet indicated on the map. She’d measured it carefully, just as she’d measured all the distances since she climbed down into that first offshoot passage at the end of the cavern’s entrance. A narrow and twisty passage, smelling strongly of bat guano, some lengths of it so low she’d had to crab-walk, it had finally flattened out. So far the distances had matched those on her map to the centimeter.

At this point, there should have been a small arched opening directly to her right. She focused her head lamp some eight feet up to the top of the cave wall then slowly scanned downward. She didn’t see an arch or any sign there’d ever been one. She went over the directions again to this point, rechecked the distances, but no, she hadn’t screwed that up. Again, she shone her head lamp on the cave wall, moved back and forth at least three feet in both directions. Nothing. She was in the right spot, she knew it. Ruth rarely cursed when she was frustrated. She hummed instead. And so she hummed as she began to glide the palms of her hands slowly over the wall, pushing inward here and there. The wall was limestone, dry to the touch, eons of sand filming over it. Nothing but a solid cave wall. She was disappointed, but she knew that was a fact of life for a treasure hunter. Her old uncle, Tobin Jones, a treasure hunter for fifty years, and something of a mentor to her, had told her that for every authentic treasure map, there are more fraudulent ones than illegal aliens in California. Of course that was because every fraudulent map was a treasure in itself if it sucked in the right mark. Problem is, Tobin had said with a shake of his head, we’re all suckers. But that, he’d always believed, was better than those idiots traipsing over an empty ballpark or a beach with their metal detectors, looking for nickels. Actually, she used metal detectors, had a portable one attached to her belt along with two more flashlights. Yes, she understood all about fake treasure maps, but she’d really been excited about this one. All her research had led her to believe it could be the real deal. Even the age of the paper, the ink, and the manner of writing tested out—about 150 years old.

But there was no arch. She felt the crash of disappointment again and kicked the cave wall. There was always frustration, and it wasn’t as if she hadn’t been taken before. There were the two fraudulent maps that had sent her after the guys who’d sold them to her; they’d known she was a cop, the morons. Then there was the Scotsman who sold her a map of a cave not a quarter of a mile west of Loch Ness. She should have known better, but he was so charming she’d believed him for one delicious moment. She shook her head. Pay attention. This map wasn’t a fraud, she felt it in her gut. If there was gold here, she intended to find it. If there wasn’t an arch, maybe it had crumbled and filled in over the long years. Yeah, right. She laughed at herself, an odd, creepy sound in the dense silence. What an idiot. The arch certainly could have collapsed, but it would remain visible. Debris from a cave-in would remain in situ for longer than time itself. Nothing would magically occur to fill it in from bottom to top so seamlessly. Only men could do that.

She stepped back, lifted her head so her head lamp shone directly on the wall. She studied every inch of it, pressing inward with her fist everywhere she could reach. Mr. Weaver had told her this part of Winkel

’s Cave had never been explored, much less mapped. Even though he appeared worried for her, he still had a gleam in his eye at the thought of splitting any treasure she found. It was the feel of the cave, she thought, the way the silence felt, the hollow sound of her footsteps. She was sure no one had been in this cave for a very long time, perhaps since the gold was left here. Mr. Weaver had installed an iron grate to close off the entrance—fools injuring themselves, suing him, he’d told her. He couldn’t find the key, but that hadn’t mattered. The lock had been child’s play to pick. Finally, she stepped back and hummed some more. If someone had filled in an arched opening, they did it remarkably well. She could find no seams, nothing that looked out of place or staged. She sat back against the opposite cave wall and retied one of her walking boots. She realized she was tired. She pulled out an energy bar, her favorite peanut butter, and slowly began to eat it, washing it down with water from the plastic bottle fastened to her belt. Still sitting, she raised her head to train her lamp again on the opposite wall. She was beginning to hate that frigging wall. She began at the top, and slowly scanned all the way to the bottom again.

She saw something, about two feet above the floor, where the light reflected differently. She crawled to the wall and studied the thin shadow she’d seen. There, that was it, a line of dust and dirt about a half an inch wide.

Ohmigod, it wasn’t just a line; it was shaped like an arch.

She felt her adrenaline spike. She looked more closely and saw that someone had gouged the arch deeply into the wall. She touched it with her fingertip, lightly pushed inward. Her finger sank easily through years of soft, thick dust, up to her first knuckle. She knew one thing for sure now. The accumulation of dust in that grooved arch was decades older than she was. She wondered how many more years would have to pass before the arch outline disappeared entirely. Who had cut this arch and why, for heaven’s sake? Or was it a cover of some kind?

Ruth lightly pushed against the limestone directly below the top of the arch. To her astonishment, it gave a little. She laid her palm flat against the wall and gave a sharp push. The stone fell back some more. Her heart kettledrummed in her chest. The stone was light enough that she could dig it out. She pulled the small pick from her belt and went at it; the limestone crumbled, and suddenly she was staring at a small round hole.

She leaned forward, but the hole was too small for her to see anything in the chamber beyond. And there was a chamber beyond, the chamber she was looking for. Grinning like a madwoman, Ruth continued to use the pick on the limestone below the line of the arch. The stone broke apart, collapsing inward into the next chamber. When she’d cleared it out, it was no bigger than a St. Bernard doggie door, but it was large enough to look into. Shoving dirt out of the way, she stuck her head through the opening. She saw nothing but a floor. Pulling her second flashlight out of her belt she beamed both it and her head lamp straight ahead, then slowly to the right, then back to the left. The light faded into endless black, without reflection.