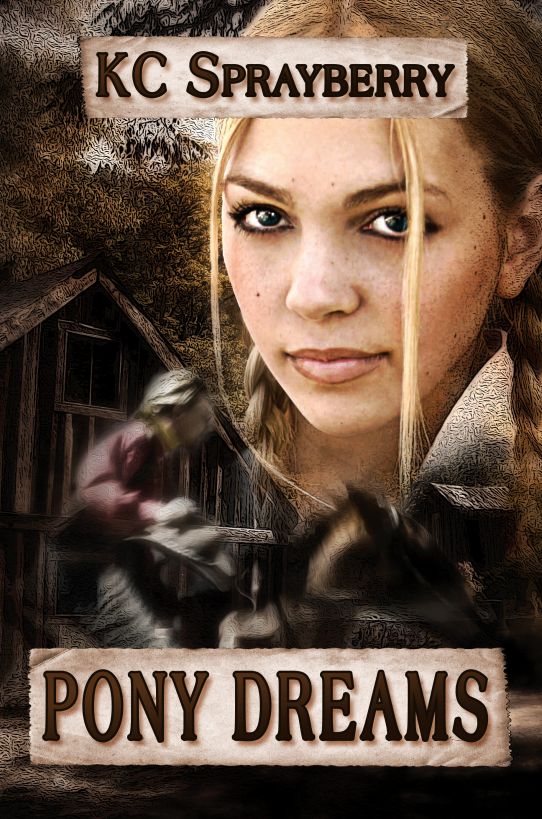 Abigail Weston's starry-eyed dream is to
become the first female Pony Express rider. Ma, Pa, and six
overprotective brothers won't even let her near the corral to train
mustangs for the mail venture, so she gives up her dream to sneak
out and talk to the ponies, teaching them to accept her weight on
their backs.

Then her life changes and all her dreams are
dust. Or are they?

A book in production seems to be a lonely
endeavor from the outside. That can't be further from the truth,
and I take this opportunity to thank those who made
Pony
Dreams
possible.

My husband, Jim, and our youngest son, a high
school senior, Josh. They knew just the right moment to interrupt,
took on research when I couldn't, and were always ready to stir up
a cup of coffee for those middle of the night brainstorms.

Donna, fellow author and a great friend, who
fact checked for me, told me when my beautiful prose was too much,
and was just there when needed.

The ladies of Flying Wagons Critique group,
Kay, Mary Ann, and Teresa. You saw this story several times. Yet,
you never complained, and helped me work out the technical
things.

Thank you, one and all.

If anyone had asked me to describe fifteen,
I'd tell them it was near an impossible age. Everyone expected me
to act like a lady and wear dresses all the time. I had to pin up
my hair instead of letting it swing in the breeze in two long
braids. Ladies didn't run around without a care in the world, nor
could they allow the sun to tan their skin.

Being a lady stinks.

What I wanted deep in my heart was to wear
pants and train horses from sunup to sunset. No one in my family
listened whenever I begged them to let me help with training the
horses, so a lady I was. They told me to get about my chores. To
stay out of trouble, I did those awful, everyday, jobs but with
hate in my heart. That was all I, Abigail Grace Weston,
faced—never-ending, boring housework day in and day out.

I would never get a break from this boredom,
as a lady in the nineteenth century never had a chance to think for
herself, nor did she really run her home. A man always took care of
a lady. This was one of the strictest rules I learned at an early
age. No one ever let me forget it, no matter what dreams I had,
like the forbidden desire to one day becoming a Pony Express
rider.

Sneaking off to join the Pony Express wasn't
available to me as my family lived on a ranch far from any towns.
But I did have a chance to get near horses, as we provided them for
the cross-country mail service. Yet, I still felt a bit empty
inside. Even with the opportunity to spend time with the half-broke
mustangs, a part of me yearned for the freedom of racing over
mountains, across streams, and through the unrelenting prairie.

“Why won't Ma and Pa understand?” I dropped a
pink calico dress over my head and buttoned up the bodice. “I have
to train the ponies. They need me.”

I brushed out my hair, did up my braids, and
pinned them in a neat bun at my neck. Sunlight peeked around the
curtains over an oiled paper window. After pushing aside the
patched and faded curtains made from one of my cast off dresses, I
opened the window and leaned my elbows against the splintery wood
to stare at the corral.

“It's positively sinful to make me sleep in
the only bedroom overlooking the corral.” I sighed. “I'd promise Ma
anything to spend two ... no, three days a week working with the
horses without having to sneak around.”

Temptation gnawed at me until I had to break
a rule, or I'd bust into a hundred pieces. I crawled out the window
and sneaked between the house and barn to get to the corral.
Halfway there, I heard a branch snap.

Fear froze me in my tracks. None of the
stunted piñon trees were anywhere close to the house or the corral.
A branch snapping meant someone was near me, someone I couldn't
see. My heart thud-a-thumped so loud I wondered why my parents and
six brothers hadn't raced outside to see what I was doing.

“Peter, Paul, is that you?” I called
softly.

They were the worst of all my brothers. Peter
and Paul thought nothing of harassing me while I ironed miles of
sheets, or sneaking food from a pot while I cooked.

“Where are you?” I looked around. “Ma will
wear out her broom on your backsides if you scare me again.”

Their favorite trick was to pretend to be
Paiute Indians and jump out when I least expected them. I listened
hard so I'd catch them before they scared me out of a year's
growth. The only sound I heard was the ponies nickering in the
corral. Torn between returning to the house or spending time with
the horses, I looked around again, but saw no one.

“I'll just spend a minute or two with the
horses.” I ran the rest of the way to the split rail fence
surrounding the corral, deciding the noise had all been in my head.
“I can't resist.”

After leaning over the fence as far as I
dared, I reached for one of the half-broke mustangs weaving around
behind the wooden rails. Pa and four of my brothers would soon take
them on a delivery to several Pony Express Stations, but I wanted
to make sure the animals were ready.

“I hope no one notices I'm not doing my
chores,” I whispered, “and that Ma doesn't need eggs soon.”

One of the dusty brown animals nuzzled my
fingers. I smiled. Whenever I could break free from my chores, I
worked with the horses, but only when no one else was around.
Breaking horses was something no sensible woman ever did, according
to Ma. It was one of the many rules a female had to live with in
1860, and I hated every single one of those foolish rules.

“Do a good job for The Pony,” I whispered to
the mustang. “Don't let those riders down.”

Images of riders streaking over mountains and
through barren desert raced through my mind. Until a few months
ago, my family trained these horses for other ranchers, local
lawmen, and a few men passing through who'd heard of Weston Ranch.
Then a man from Russell, Majors, & Waddel Overland Freighters
had visited.

“We've heard how well you train your
stallions, Mr. Weston,” the man had said. “Will you consider doing
the same for our new enterprise, The Pony Express? It will carry
mail across the country, from St. Joseph, Missouri to San
Francisco, California, and then back again. The mail will only cost
a nickel for a letter. Imagine how much you'll help people connect
with family members living so far from each other.”

Pa had nodded, and our lives turned upside
down.

“Except mine. Holy Heck! Why can't a girl
train horses?”

Sighing, I patted the horse and jumped to the
ground. No one knew of my impossible dream; one I gave up on when
my oldest brother, Adam, returned from Carson City and said The
Pony Express had more riders than they needed. Until he confessed
he had tried to hire on, none of us suspected what he wanted. After
Pa and Ma expressed relief, I never told a single soul my deepest
wish; one I made on the first star I saw after I heard about The
Pony Express.

I wanted to be the first female rider.

This day, as the sun peeked over the horizon,
that wish became an uncontrollable urge. Deep within my heart, I
felt the desire to mount the mustang I'd just touched, and keep
riding until I was in Carson City and then finding a way to make
myself look like a boy.

My foot moved of its own accord. I stepped
back up on the fence and reached for the horse. He moved toward me,
and I smiled in anticipation of leaving Weston Ranch for my own
adventure.

“We can do it, can't we?” I asked the horse.
“You can carry me to the nearest station and then we can deliver
the mail.”

The horse nickered and bobbed his head up and
down. Oh, my second sweetest dream was about to come true! I was
about to ride one of these beautiful horses

The horse nudged my open hand with his nose.
He stared at me with eyes filled with longing for the open desert.
Who was I to deny this animal his freedom, but only if it came with
my escape from my boring life?

“Shall we go to The Pony?” I asked and then
regretted my hasty words.

A horse such as this one had a spirit rarely
seen in humans or other animals. By taking this mustang from his
herd, I might break that spirit. And then there was Adam's
announcement about The Pony not needing any more riders, a far
bigger disappointment than Ma and Pa's edict I couldn't ever
consider riding astride or training the horses in anything but
secret.

With my hopes dashed by Adam's revelation The
Pony didn't need me, I decided my second wish had a better chance,
training the horses. But I still faced the
you're-a-girl-and-can't-do-anything-fun obstacle.

“I'll show everyone.” I cast one last look at
the horses. “Better get my chores done, or Ma'll figure out what
I'm up to.”

If I didn't get over to the chicken coop and
gather eggs, one of my pesky brothers would tattle on me. I took a
step but stopped when four shadows approached. The excuse I had
come up with to explain why I was out of the house withered on my
tongue at the sight of the men blocking my path.

He owned the ranch closest to us, about five
miles away. Albert, Daniel, and Gabriel, his sons, grinned at me in
such a way as to scare the life out of me. Nervousness made me
skitter to the side, but they blocked every path of escape.

If any of the other neighbors had shown up, I
would have taken them into the house and told Ma I'd snuck out. The
Johnsons weren't the sort to invite anywhere. Gabriel, the oldest,
had hinted he wanted me to take care of his place. Since I was
close to marrying age, I viewed his interest as a threat, one I
wouldn't give him a chance to make come true. As soon as Pa heard a
whisper of a rumor about Gabriel's plans, he'd chase the Johnsons
right out of Nevada. That is unless Adam, Bart, Charles, Mark,
Peter, and Paul didn't catch wind of the Johnsons nefarious plans
first.