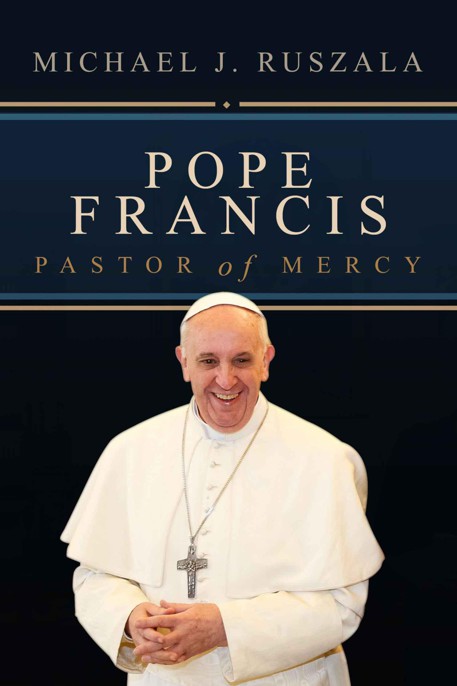 Thank you for downloading this Wyatt North Book

Never miss a free book from Wyatt North, and receive FREE inspirational eBooks for your eReader!

Thousands of readers have already joined. Sign up for free today.

Copyright © Wyatt North Publishing, LLC. All rights reserved, including the right to reproduce this book or portions thereof in any form whatsoever. For more information please visit
http://www.WyattNorth.com
.

Scripture texts in this work are taken from the
New American Bible, revised edition
© 2010, 1991, 1986, 1970 Confraternity of Christian Doctrine, Washington, D.C. and are used by permission of the copyright owner. All Rights Reserved. No part of the New American Bible may be reproduced in any form without permission in writing from the copyright owner.

Starting out with just one writer, Wyatt North Publishing has expanded to include writers from across the country. Our writers include college professors, religious theologians, and historians.

Michael J. Ruszala holds an M.A. in Theology & Christian Ministry and a B.A. in Philosophy and Theology
summa cum laude
from Franciscan University of Steubenville and is certified as a parish catechetical leader by the Diocese of Buffalo. He is director of faith formation at St. Pius X Catholic Church in Getzville, NY, and an adjunct lecturer in religious studies at Niagara University in Lewiston, NY. Michael is also an active member of the Society of Catholic Social Scientists and serves on the Catechumenate Board and the Faith Formation Assessment Committee for the Diocese of Buffalo. He has been published in several religious journals including the Social Justice Review, the Catholic Social Science Review, and Lay Witness online edition, with articles often touching on contemporary papal teaching. With interests in music, art, tennis, and kayaking, he also enjoys directing the Children’s Choir at his parish.

About Wyatt North Publishing
Foreword
Introduction
Early Life in Argentina
Vocation as a Jesuit
Dark Days in Argentina
Bergoglio’s Peaceful Secret Resistance
Growth of a Pastor of Souls
A Cardinal for the Poor
Promoting a Culture of Cooperation
A Window to the Soul
The Papacy and Resignation of Benedict XVI
The Conclave of 2013
Pope Francis Greets the World
‘Bishop and People’
Pope Francis and Saint Francis
Mercy: A Key to Understanding Pope Francis
Church Reform
Pope Francis and the Youth
Pope Francis’ Role in the Church
The Rosary
Foreword

Understanding the life of Jorge Mario Bergoglio is essential to understanding how Pope Francis shepherds his flock - and the key is mercy.

What exactly do people find so attractive about Pope Francis? There is something about him that captivates and delights people, even people who hardly know anything about him.

Aldo Cagnoli, a layman who developed a friendship with the Pope when he was serving as a cardinal, shares the following: “The greatness of the man, in my humble opinion lies not in building walls or seeking refuge behind his wisdom and office, but rather in dealing with everyone judiciously, respectfully, and with humility, being willing to learn at any moment of life; that is what Father Bergoglio means to me.”

This book uncovers the life of the 266th Bishop of Rome, Jorge Mario Bergoglio.

“Dear young people, please, don’t be observers of life, but get involved. Jesus did not remain an observer, but he immersed himself. Don’t be observers, but immerse yourself in the reality of life, as Jesus did.”

There is something about Pope Francis that captivates and delights people, even people who hardly know anything about him. He was elected in only two days of the conclave, yet many who tried their hand at speculating on who the next pope may be barely included him on their lists. The evening of Wednesday, March 13, 2013, the traditional white smoke poured out from the chimney of the Sistine Chapel and spread throughout the world by way of television, Internet, radio, and social media, signaling the beginning of a new papacy. As the light of day waned from the Eternal City, some 150,000 people gathered watching intently for any movement behind the curtained door to the loggia of St. Peter’s. A little after 8:00 p.m., the doors swung open and Cardinal Tauran emerged to pronounce the traditional and joyous Latin formula to introduce the new Bishop of Rome: “Annuncio vobis gaudium magnum; habemus papam!” (“I announce to you a great joy: we have a pope!”) He then announced the new Holy Father’s identity: “Cardinalem Bergoglio...”

The name Bergoglio, stirred up confusion among most of the faithful who flooded the square that were even more clueless than the television announcers were, who scrambled to figure out who exactly the new pope was. Pausing briefly, Cardinal Tauran continued by announcing the name of the new pope: “...qui sibi nomen imposuit Franciscum” (“who takes for himself the name Francis”). Whoever this man may be, his name choice resonated with all, and the crowd erupted with jubilant cheers. A few moments passed before the television announcers and their support teams informed their global audiences that the man who was about to walk onto the loggia dressed in white was Cardinal Jorge Mario Bergoglio, age 76, of Buenos Aires, Argentina.

To add to the bewilderment and kindling curiosity, when the new pope stepped out to the thunderous applause of the crowd in St. Peter’s Square, he did not give the expected papal gesture of outstretched arms. Instead, he gave only a simple and modest wave. Also, before giving his first apostolic blessing, he bowed asking the faithful, from the least to the greatest, to silently pray for him. These acts were only the beginning of many more words and gestures, such as taking a seat on the bus with the cardinals, refusing a popemobile with bulletproof glass, and paying his own hotel bill after his election, that would raise eyebrows among some familiar with papal customs and delight the masses.

Is he making a pointed critique of previous pontificates? Is he simply posturing a persona to the world at large to make a point? The study of the life of Jorge Mario Bergoglio gives a clear answer, and the answer is no. This is simply who he is as a man and as a priest. The example of his thought-provoking gestures flows from his character, his life experiences, his religious vocation, and his spirituality. This book uncovers the life of the 266th Bishop of Rome, Jorge Mario Bergoglio, also known as Father Jorge, a name he preferred even while he was an archbishop and cardinal.

What exactly do people find so attractive about Pope Francis? Aldo Cagnoli, a layman who developed a friendship with the Pope when he was serving as a cardinal, shares the following: “The greatness of the man, in my humble opinion lies not in building walls or seeking refuge behind his wisdom and office, but rather in dealing with everyone judiciously, respectfully, and with humility, being willing to learn at any moment of life; that is what Father Bergoglio means to me” (as quoted in Ch. 12 of Pope Francis: Conversations with Jorge Bergoglio, previously published as El Jesuita [The Jesuit]).

At World Youth Day 2013, in Rio de Janeiro, Brazil, three million young people came out to celebrate their faith with Pope Francis. Doug Barry, from EWTN’s Life on the Rock, interviewed youth at the event on what features stood out to them about Pope Francis. The young people seemed most touched by his authenticity. One young woman from St. Louis said, “He really knows his audience. He doesn’t just say things to say things... And he is really sincere and genuine in all that he does.” A friend agreed: “He was looking out into the crowd and it felt like he was looking at each one of us....” A young man from Canada weighed in: “You can actually relate to [him]... for example, last night he was talking about the World Cup and athletes.” A young woman added, “I feel he means what he says... he practices what he preaches... he states that he’s there for the poor and he actually means it.”

The Holy Spirit guided the College of Cardinals in its election of Pope Francis to meet the needs of the Church following the historic resignation of Pope Benedict XVI due to old age. Representing the growth and demographic shift in the Church throughout the world and especially in the Southern Hemisphere, Pope Francis is the first non-European pope in almost 1,300 years. He is also the first Jesuit pope. Pope Francis comes with a different background and set of experiences. Both as archbishop and as pope, his flock knows him for his humility, ascetic frugality in solidarity with the poor, and closeness. He was born in Buenos Aires to a family of Italian immigrants, earned a diploma in chemistry, and followed a priestly vocation in the Jesuit order after an experience of God’s mercy while receiving the sacrament of Reconciliation. Even though he is known for his smile and humor, the world also recognizes Pope Francis as a stern figure that stands against the evils of the world and challenges powerful government officials, when necessary.

The Church he leads is one that has been burdened in the West by the aftermath of sex abuse scandals and increased secularism. It is also a Church that is experiencing shifting in numbers out of the West and is being challenged with religious persecution in the Middle East, Asia, and Africa. The Vatican that Pope Francis has inherited is plagued by cronyism and scandal. This Holy Father knows, however, that his job is not merely about numbers, politics, or even success. He steers clear of pessimism knowing that he is the head of Christ’s Body on earth and works with Christ’s grace. This is the man God has chosen in these times to lead his flock.

Jorge Mario Bergoglio was born on December 17, 1936, in the Flores district of Buenos Aires. The district was a countryside locale outside the main city during the nineteenth century and many rich people in its early days called this place home. By the time Jorge was born, Flores was incorporated into the city of Buenos Aires and became a middle class neighborhood. Flores is also the home of the beautiful Romantic-styled Basilica of San José de Flores, built in 1831, with its dome over the altar, spire over the entrance, and columns at its facade. It was the Bergoglios’ parish church and had much significance in Jorge’s life.

Faustus by David Mamet
I Beleive Now by Hurri Cosmo
The Realest Ever by Walker, Keith Thomas
Curse of the Nandi (Society for Paranormals Book 5) by Vered Ehsani
The Ten Commandments by Anthea Fraser
Lone Wolf Justice by Cynthia Sax
All Yours by Translated By Miranda France By (author) Pineiro Claudia
Tied Up In Heartstrings by Felicia Lynn
Second Opinion by Claire Rayner
The Badger Riot by J.A. Ricketts