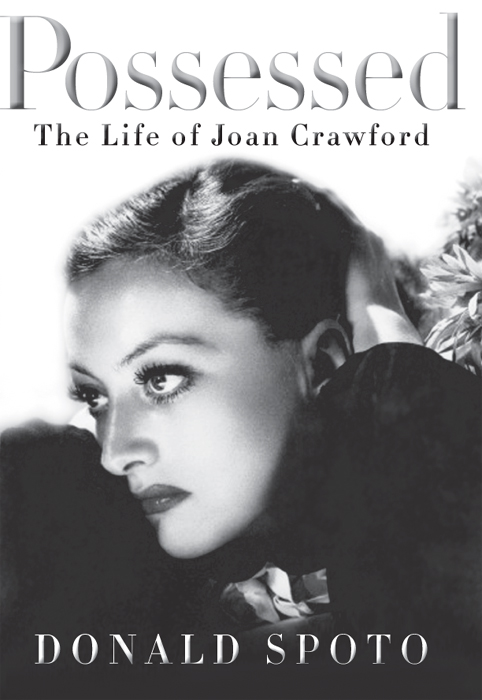 The Life of Joan Crawford

for Ole—
again, and always

… right next to the right one …
—Tim Christensen, Danish composer and lyricist

I’ll do my own thinking, thank you—and my own existing.
—Joan Crawford, as the title character in
Daisy Kenyon
(1947)

A
LMOST SIXTY YEARS
later, the envelope’s California postmark and Thomas Jefferson’s profile on the purple stamp remain unfaded. The content is still clear, too—perfectly typewritten and signed with a bold flourish:

Thank you for writing such a sweet letter.

I am so happy that you liked my new picture, “Sudden Fear.” It was a challenge for me, and there were some very hard scenes. But I enjoyed working in San Francisco, and I was very lucky to work with fine actors like Mr. Jack Palance and Miss Gloria Grahame.

I am so impressed that you read Miss Edna Sherry’s book that our movie was based on. I don’t think there are many eleven-year-old movie fans who do that!

Thank you again for writing to me. I hope you will stay in touch, and that we will meet some day. Good luck in school!

I WAS TAKEN TO
the movies for the first time on my fourth birthday, in June 1945; the program was an afternoon of Disney cartoons at the Pickwick Theater in Greenwich, Connecticut. When my family moved briefly to White Plains, New York, at the end of that year, I was frequently treated to a matinee at the Pix Playhouse. Then, from 1947 (when I entered first grade) to 1959 (when I left home for college), I went almost every Saturday afternoon either to the RKO Proctor’s or to the Loew’s in New Rochelle—or to the nearby Larchmont Playhouse, where I saw the thriller
Sudden Fear
in late August 1952. I pestered my mother until she somehow obtained the Hollywood address of the movie’s distributor, RKO Radio Pictures. She cautioned me that if I wrote a fan letter telling Miss Crawford how much I liked her movie, I should not expect a reply: “Movie stars don’t have time to answer letters from strangers, so try not to be disappointed.”

As it happened, my youthful enthusiasm for
Sudden Fear
was not misdirected. A few months after I had pasted Joan Crawford’s reply into my scrap-book, the picture was nominated for four Academy Awards, including one for Joan Crawford as best actress of the year. She had already won the Oscar six years earlier, for
Mildred Pierce,
but it took me a long time to catch up with that movie—and much longer to have any clear idea about the actress, her life and her long list of achievements.

By the time of
Sudden Fear,
Joan was in her midforties, well past the age (according to Hollywood’s strange standards) for leading ladies to play women in love unless the characters were doomed or pathetic. (That year, the estimable Shirley Booth, fifty-five, was anointed best actress for her role as the grandmotherly wife Lola in
Come Back, Little Sheba.)
But Crawford was having none of the conventional wisdom that nice middle-aged women are or should be indifferent to passion. The role of Myra Hudson in
Sudden Fear
was her own choice; she was the movie’s
de facto
executive producer; she supervised the development of the character and collaborated on the screenplay; and she tackled with enormous gusto the part of a wealthy, successful playwright longing for love. Myra does not retreat quietly to life’s upper balcony just because she happens to be forty-something.

By 1952, Norma Shearer and Greta Garbo—Joan’s two rivals during her years at Metro-Goldwyn-Mayer—had long since retired, and Marlene Dietrich was performing in nightclubs. But Joan Crawford kept fighting for new roles for older women, and she succeeded. For half a century, she assessed what the public wanted in each era: the jazz baby during the 1920s; the independent thinker of the 1930s; the troubled postwar woman of the 1940s; the romantically starved woman of the 1950s; the horror queen of the 1960s and 1970s. But those broad categories never exhausted the range of her roles.

MY PARENTS HAD BEEN
in high school in the early 1930s, when Joan was already a major star, and when I returned home from the Larchmont Playhouse that Saturday afternoon in 1952, I was astonished to learn that she was very well known to the older generation. By then, 80 percent of Joan Crawford’s total motion picture output was behind her: of her eighty-seven feature films, there were only eighteen after 1950. But like Molly Brown, she was unsinkable, unpredictable, indomitable. “I remember that she was a champion Charleston dancer before she was a movie star,” my mother said when I received Miss Crawford’s reply, “and she had the trophies to prove it.” Crawford spanned generations, movie styles—in fact, movie history itself.

Never content with her past achievements, Joan sought only to extend the frontiers of her talent and experience; indeed, one of the major themes of this book is that few are her equal in terms of the sheer volume, variety and quality of her performances. In addition to her movies, she was heard on dozens of radio dramas from the 1930s through the 1950s, and then she eagerly turned to acting on television, appearing on many of the most popular programs of the time—
The Jack Benny Program, I Love Lucy, Route 66, The Man from U.N.C.L.E.
and
The Virginian.
Steven Spielberg’s first job in the industry was directing Joan in a terse, tense half-hour thriller. Only work in the theatre eluded her: as she admitted, she suffered from paralyzing stage fright that was exacerbated by a poignant shyness in the presence of strangers.

Joan’s accomplishments in television are remarkable: twenty dramas; fortyappearances on talk shows; thirteen variety and comedy shows; a dozen award programs and game shows; a half-dozen tribute specials; commercials; and public service announcements for charities. Until grave illness forced her to withdraw from the world toward the end of her life, she considered
retirement
a dirty word.

But a mere catalogue of achievements does not justify a full-scale biography. After surveying the shelf of chronicles published about Joan since her death in 1977, the question must be addressed: Why another life story? Quite simply, because perhaps no other movie star—with the possible exception of Marilyn Monroe—has been so underappreciated, misrepresented by rumor, innuendo, fabrication, unfounded allegation and rank distortion.

Joan Crawford was neither Joan of Arc nor the arch she-devil of popular misconception. She was a recognizably human and passionate woman who entertained millions; she made egregious mistakes and learned from them; and she always had a legion of friends and countless admirers. One’s fame or power or influence was never the criterion for friendship with Joan, and she was on warm terms with people from every walk of life. The shift in public opinion from respect to contempt only began a year after her death, with the publication of a book called
Mommie Dearest,
which alleged that Joan was a sadistic alcoholic who took special pleasure in torturing her adopted children.

THE BOOK YOU ARE
holding is an attempt to set the record straight on a number of critical matters concerning Joan Crawford’s complex character. Not the least of these issues is, in fact,
Mommie Dearest,
which ought to be judged in light of certain matters often ignored. In many ways, Joan was a jumble of contradictions, but the contradictions provide clues to what has been mostly discounted or denied—specifically, that she was much more than just a movie star: she was demonstrably one of the screen’s most talented actresses. I have attempted to support this large claim by examining all her extant feature film performances (seventy of her eighty-seven motion pictures).

Joan’s critics claim that she had no gift for comedy, and that the so-called weeping woman’s movie was the extent of her range. But that assertion can be made only by those who have not seen comedies like
Chained, Forsaking All Others, Love on the Run, The Women, Susan and God, When Ladies Meet
and
Above Suspicion.
Those movies prove that she was certainly a gifted exponent of high comedy—a fact that comes as a surprise to those who identify Joan Crawford only with
Mildred Pierce, Humoresque
or
What Ever Happened to Baby Jane?

BORN LUCILLE FAY LE SUEUR
, she was renamed in a studio-sponsored publicity contest. As Joan Crawford, she never took an acting lesson, nor did she ever study with a drama coach. Working by instinct, intensely focused and observant, she was completely self-educated; as her first husband, Douglas Fairbanks Jr., told me, “She never ceased in her efforts at self-improvement and was dedicated to her art—to a point of almost religious devotion.”

Joan moved through several phases in her fifty-year career—from Broadway chorus girl to flaming flapper, from silent movie vamp to comic mannequin, from dramatic actress to businesswoman and corporate executive. Through it all, she was tenacious, tough and tender. When people met her, they were often surprised to see that the woman who seemed so much larger than life on-screen was just slightly over five feet tall.

Perhaps because she had come from a crude, poor background and was mistreated in her childhood, Joan always insisted—sometimes even to her own amusement—that people demonstrate exquisite manners and courtesies,toward both herself and others. “People were in awe of her, but she was never in awe of herself,” recalled her friend, the director Herbert Kenwith. “She could speak with all kinds of people on their own levels.”

That quality was evident one day not long before Joan died. She was leaving a Manhattan restaurant when a team of construction workers recognized her and whistled loudly. “Hey, Joanie!” shouted one of them.

Smiling, she went over to shake their hands. “I’m surprised you fellas know who I am!”

“You’re one in a million,” said a workman. “They sure don’t make them like you anymore, baby!”

In Bed with the Enemy by Janet Woods
Rafael (The Santiago Brothers Book One) by K. Victoria Chase
When You Were Older by Catherine Ryan Hyde
Longarm 242: Red-light by Evans, Tabor
The Cabinet of Curiosities by Douglas Preston, Lincoln Child
Help! A Bear Is Eating Me! by Mykle Hansen
The Dangerous Love of a Rogue by Jane Lark
Secret Heiress by Shelley, Lillian;
Blow Me Away (Seven Tribesmen Motorcycle Club Book 3) by Evelyn Glass
Hawks Mountain - Mobi by Sinclair, Elizabeth