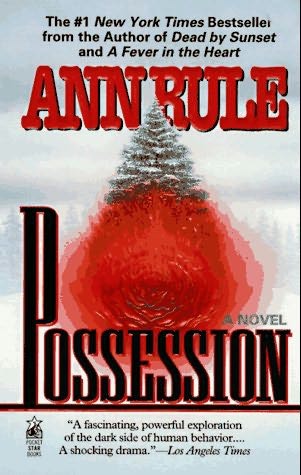 "A gripping, powerful and terrifying noveL. The author spares the beholder nothing at all...."—James Dickey

The author of ten New York Times bestsellers, Ann Rule is peerless at capturing the darkly fascinating worlds of America's most twisted criminals. Now, this undisputed master of true crime brings her formidable talents to her first novel, a riveting tale of psychological suspense....

Joanne is left alone and stranded in the savage wilderness. Her last hope is to rely on another camper, a

tall stranger who seems to know the forest and the dangers there all too well. Without him, she will surely

die; with him, her future is as unpredictable as the lowering clouds that envelop the mountain. He asks only that she trust him...totally.

"POSSESSION kept me writhing in its grip from beginning to end."—John Saul

Praise for the Unparalleled Work of ANN RULE

"The similarities with the O.J. case are compelling."

YOU BELONG TO ME

"Ann Rule delivers six tales of obsession and murder with the suspense and class we have come to expect from the author of The Stranger Beside Me. . . . Rule makes the story of each victim as fascinating as the pathology of the killer." —Flo Stanton, The Indianapolis Star

"Each of these stories could be a book in itself, and each will cause you to creep out of your bed at night to double-check the locks and make your heart skip a beat at the next unexpected knock."

"The cases [are] explored in chilling detail. . . compelling. . . . Rule [is] the ruler of the whole true-crime empire."

A ROSE FOR HER GRAVE

"Ann Rule ... has a great knack for horrific detail."

truly a master crime writer in A Rose for Her Grave, a book that breaks new ground in the true-crime field."

"[In] this chilling collection . .. her unwavering voice presents even the most gruesome details rationally."

IF YOU REALLY LOVED ME

"Bone-chilling ... a truly staggering case . . . Rule does an admirable job of drawing out the drama and the nuances."

"A real page-turner ... a passport into perversion."

"A story of crime and punishment. . . bizarre enough to rivet anyone's attention."

"Meticulous reporting ... the characters are

EVERYTHING SHE EVER WANTED

"Ann Rule has become a master of the true-crime genre."

"Ms. Rule . . . now turns her devastatingly accurate insight to the twisted mind of a modern-day Southern belle. A measure of how well she succeeds is the feeling that came over me after reading just a few paragraphs about Pat Allanson. I wanted to reach out and strangle her."

"Yet another true-crime triumph for Ann Rule ... a magnificently constructed book."

A Fever in the Heart and Other True Cases

Ann Rule's Crime Files: Vol. 3 Dead by Sunset You Belong to Me and Other True Cases

Ann Rule's Crime Files: Vol. 2 Everything She Ever Wanted A Rose for Her Grave and Other True Cases

Ann Rule's Crime Files: Vol. 1 If You Really Loved Me The Stranger Beside Me Possession Small Sacrifices

For orders other than by individual consumers, Pocket Books grants a discount on the purchase of 10 or more copies of single titles for special markets or premium use. For further details, please write to the Vice-President of Special Markets, Pocket Books, 1633 Broadway, New York, NY 10019-6785, 8th Floor.

This book is a work of fiction. Names, characters, places and incidents are products of the author's imagination or are used fictitiously. Any resemblance to actual events or locales or persons, living or dead, is entirely coincidental.

A Pocket Star Book published by

All rights reserved, including the right to reproduce this book or portions thereof in any form whatsoever. For information address W.W. Norton & Company, Inc., 500 Fifth Avenue, New York, NY 10110

Cover art by Don Brautigam Printed in the U.S.A.

LAURA, LESLIE, ANDY, MIKE, BRUCE, REBECCA, AND MATTHEW. MAY THEY ALWAYS KNOW THAT LOVE IS THE ONLY POSSESSION THAT MATTERS. Acknowledgments

For their inspiration, patience, support, intelligence, and friendly criticism, I owe many thanks to the following:

And to Starling Lawrence, my editor, whose pencil is as deft as it is ruthless.

Lureen Demich might have been surprised to know that her labor pains began less than a mile from where she had conceived the child. She had been with so many men for so many reasons in the year past that she could not be absolutely sure who the father was. Sometimes she let them do it because she was lonely, sometimes for money, and occasionally she had only been bored. But never once for love.

She moved on when the carnival's tents were struck and the caravans lumbered off to the next town, and the men blurred in her mind along with the cities along the circuit: Cincinnati, Moline, Ann Arbor. But she did remember one gangling, carrot-haired boy who'd been pushed into her trailer by some drunken fraternity boys, the kid who'd stuttered as he'd shoved a ten-dollar bill at her. He must have been a smart kid to be in college even though he couldn't have been over sixteen. She saw that he was a joke to the others, that they resented him for his brains, and she heard them laugh when his book smarts and fancy words failed him where it counted.

She'd taken his money and told him to hurry as his friends chanted cadence outside. And hurry he had. Never even really got into her before he spilled it all over her thighs. Then she'd laughed too and turned away to clean up the mess.

The carnival was a thousand miles away when she began to vomit. Lureen had drifted aimlessly for all of her short life, planning nothing, and dreaming only impossible dreams. She always expected magic and begged the card readers to promise her a better life. But she had little aptitude for anything beyond attracting men, and when each one left

her, she always felt that things were a little worse than they had been before.

She was not yet eighteen when she crouched, terrified, against the cool metal wall of the Nashua trailer and felt her belly contract. She thought she might burst. She had been there all day and most of the night, attended by the blank-faced old gypsy woman who watched her with slight interest. There was no compassion, and no one to share the weight of Lureen's fear. The others had told her that the gypsy would know what to do, then left the two of them alone as if pestilence drenched the trailer house.

Lureen knew she was going to die; there was no way that

she could push a baby out of her without dying. She turned

of whiskey to her lips, and then heard herself grunt deep

in her throat. She bore down against the mattress beneath

her hips. Her own sounds startled her; she sounded like

an animal. The gypsy woman grunted with her, urging

explore. She prayed that the baby was dead. She had never

The gypsy woman moved toward her, blocking the window with her bulk, and Lureen closed her eyes and pushed with a shudder that shook her body. She felt herself split and something slippery and wet burst from between her legs.

For a moment, it was very quiet. She watched the gypsy rub the red and white thing with a rough towel, watched with a sense of complete removal. It was dead. Good. And then its mouth opened suddenly and she heard its cry bounce off the tinny trailer sides.

The old woman muttered with satisfaction and pushed the squalling bundle near her face. It lived, an ugly thing with a head drawn to a point, slick with her blood and covered with stuff that looked like cottage cheese.

She turned away, pressed her face into the mattress, and slept.

In Coatesville, Pennsylvania—when her name was still Louise—her own mother had gone away, leaving behind one snapshot for her daughter to study. The little girl had been able to discern that Dorothy Demich had been pretty (as she was, full-breasted to the point of incredulity (as she would be, and young, very, very, young. Louise understood that Dorothy could not have survived long in the half-house she shared with Pete Demich and her grandmother, Lena. She understood it more through the years when she waited her own time to flee. The house smelled of painted-over dirt and old women. There was no dining room; her father slept in the single bedroom, and Louise shared a Murphy bed in the living room with the old lady.

Once she had longed for rugs, or even just one rug, to cover the linoleum that was so scuffed you couldn't tell what pattern it was supposed to have. She even tried to wash the gray lace curtains and found the old Easy Spin-Dri in the basement full of nothing but shreds after the water drained away. She finally accepted that there was no way to change the half rowhouse from what it was. The neighbors who shared the common center wall painted their side every five years; Pete never bothered. Louise had tried to take friends home a couple of times, but when Pete worked all night at the Lukens steel mill, he woke in the late afternoon and walked through the house in his undershirt and shorts, scratching his testicles as if the girls weren't there, embarrassing her and frightening her schoolmates. When he worked days, Lena sat in the corner of the living room in the sagging, wine-plush chair and stared at them, her clubbed fingers spewing out lengths of tatting. What use there was for the strange knots that emerged Louise never learned. Lena refused to speak English in front of her granddaughter's friends, barking out comments in Polish to Louise. The other girls gathered up their paperdolls and went home to houses with mothers who baked cookies and hugged them.

Lena Demich had never hugged her, or kissed her, or even run a rough hand over her braids in a gesture of affection. At night, the old woman snored and farted, and

her great girth pulled Louise over to her side of the Murphy bed. Louise learned to sleep with one arm hooked around the bed frame.

Her grandmother was a presence. Nothing more. She

seemed to have some attachment to the other old women

The Persuasion of Molly O'Flaherty by Sierra Simone
The Darkest Hour by Katherine Howell
Alive and Alone by W. R. Benton
Bartered Bride: The Billionaire's Wife, Part 3 by Ava Lore
The Tree by Colin Tudge
Her Christmas Bear by Marie Mason
Season Of Darkness by Maureen Jennings
Ultima by Stephen Baxter
Valor of the Healer by Angela Highland
Pathway to Tomorrow by Claydon, Sheila