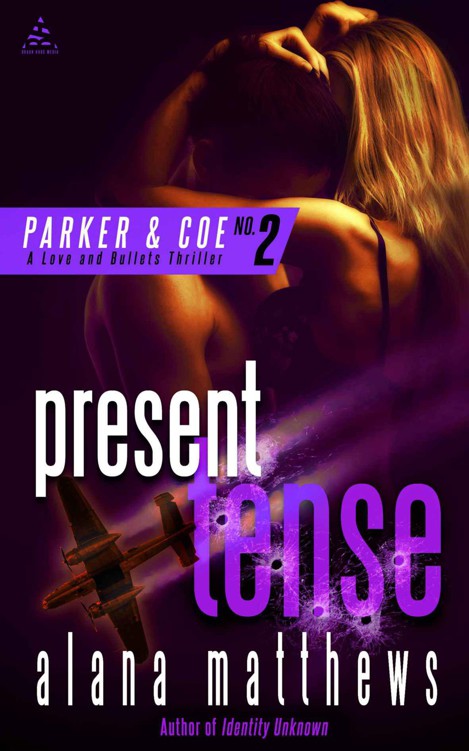 A Love and Bullets Thriller

No part of this book may be used or reproduced in any manner whatsoever without written permission except in the case of brief quotations embodied in critical articles or reviews.

Out of the Past

The last place I expected to find myself was on a plane that was about to crash.

I've never had a problem with air travel. I'm not one who panics at every hint of turbulence, or clutches my armrest when we come in for a landing. I'm the kind of girl who quickly stows her carry-on, pops in her noise canceling earbuds, then snuggles up to an inflatable pillow and spends most of the flight caught in the loving embrace of the Land of Nod.

But when I'm standing near the cockpit of a rickety twin-engine transport plane, the pilot slumped over the controls, the nose of the fuselage pointed in the direction of the good green earth while hurtling at a speed known only to God… Well, let's just say that panic comes very natural to me.

But at least I wasn't alone in my terror.

Ethan Rider was handcuffed behind me.

And this was only the beginning of a very bad day.

It was supposed to be an easy job. A simple babysitting gig that wouldn't require anything more than escorting a harmless, nonviolent prisoner from Houston to Los Angeles.

It was a cold Thursday morning, and I was in the office alone when the offer came in, while Parker was three hours north, chasing down a lead on what he called a Five Figure Fugitive.

When I told him about the job, he didn't sound thrilled. "I don't know, Kels. I'm not comfortable with you doing this alone."

"What could possibly go wrong?" I said, the irony in my tone probably lost to the cell phone connection.

We were both still healing after our encounter a few months earlier with soulless uber-bitch, Anastasia Brantov. So it was no real surprise that Parker had immediately shifted into over-protective mode.

"You're the one who almost died, remember? And I'm not
completely
helpless. Don't forget I saved your life."

I didn't bother to mention that he'd also saved
mine
quite a few times. All within the span of about twenty-four hours.

Which was part of why I'd fallen for him.

I mean, how could I resist?

It didn't hurt that, unlike the men in my past, Parker was someone I could count on, yet was full of surprises. The good kind. The kind that made you smile and sometimes laugh and wonder how you got so damn lucky. Then, of course, there were the rugged but gentle (and quite talented) hands, the broad shoulders, the narrow hips, and a set of bluer than blue eyes that often had me wishing I was carrying an extra pair of panties.

Even the sound of his voice could get me going.

"You're not convincing me," he said.

It took me a moment to remember what we'd been talking about.

"Come on, Parker, what's the big deal? I pick a guy up, we fly to LA, I collect my fee and come home." My choice of words could've been better, but I continued on. "I'll probably be back before
you
are, and Wilky promised us forty percent."

Wilky was a mid-level bail bondsman whose go-to guy was nursing a broken collarbone. When he'd asked if we'd be interested in a quick, easy score, I'd said "yes" without hesitating.

"Does he know I won't be involved?" Parker asked.

"It didn't come up. Besides, I hate to break it to you, but I don't think he cares. He sounded a little desperate and just wants a warm body to escort the prisoner. We were the first to say yes."

"I made an executive decision."

"I'm glad to hear you're stepping up, but you don't have enough experience yet. You haven't even finished your weapons training."

I almost laughed at that one. So far, this so-called training had consisted of three trips to a shooting range and one dead sociopath—not in that order. But I guess he had a point.

"You yourself said I'm a quick study. And if you think I'm gonna spend the rest of my life stuck behind this desk while you have all the fun…"

"Fun? You wouldn't be saying that if you knew anything about prisoner transport. Which you don't."

That was certainly true. Up until now, my job with Parker, Coe and Associates had been limited to setting up an LLC, paying license fees, hiring a freelance accountant, renting some office space, and fielding a few phone calls. I handled the paperwork, made nice with various law enforcement agencies and bail bondsmen, and hoped we'd get enough business to keep our doors open for more than a month or two.

"So how am I supposed to
learn
this stuff if I don't start?" I asked. "It's not like I'm hunting down a terrorist. The hard part is done. The prisoner's a con artist, not a killer."

PC&A was a skip tracing outfit, a fugitive recovery firm—or what the great unwashed call a bounty hunting agency. The "Associates" part was merely wishful thinking. Parker was the hunter, while I—Kelsey Alicia Coe—sat in our newly rented office watching lame reality shows and Turner Classic Movies, and collected what little bounty came our way.

Not that money was an issue. I had come into a large amount of it a few months earlier—a reward for taking down the aforementioned uber-bitch, whose deception had brought Parker and me together. But that's a story I've told before, and there's nothing worse than someone who repeats herself, so I won't bore you with the details. Let's just say that we're alive and she isn't and the reward check was enough to pay some major medical bills for Parker and his niece Haley, and to put us in business.

Parker drew a breath to launch another protest, but I cut him off. "Besides, this is a partnership, remember? I'm not asking for your permission."

"Then what
are
you asking for?"

"Have you been watching old movies again?"

"What else is there to do around here?"

PC&A's survival was more a matter of pride than finances. I had quit graduate school and relocated to Houston to make this happen and I'd be damned if I was going to let it fail. I knew next to nothing about the skip tracing business, but I've never let lack of knowledge prevent me from making a fool of myself. So I plunged into this venture with the kind of deluded optimism only a newly-in-love 25-year-old can rally, and told myself that a year from now we'd have more business than two people could handle.

Maybe I was blinded by my own enthusiasm, but after being chased and shot at a few times, I knew I wouldn't be happy going back to school to finish my Masters.

School seemed so... trivial to me now.

"
I'm
a quick study, too. The faster I give in, the happier we'll both be, so what's the point of fighting over it? Just do me a favor and call me if there's even the slightest hint of trouble. Which there won't be, right?"

"Wilky assured me it's a cake walk."

"Uh-huh. Will you be traveling public or private?"

"They need him in L.A. tomorrow, so Wilky chartered a transport plane. I'm meeting them at Eastman Air in an hour."

"That should make things easier. Just watch yourself, okay?"

Parker groaned. "You really need to switch to game shows."

Eastman Air Charter was a small private airline that had seen better days.

Boasting its own terminal in Northeast Houston, it was the hub of unfettered travel for CEOs and occasional rock stars until poor management, the country's economic implosion and spiraling fuel costs had nearly shut it down. It was subsequently sold at a loss, and judging by a sadly deteriorating infrastructure, now catered only to budget-minded clients.

One of those clients was Wilky, an associate of Parker's I'd met a few weeks earlier at a Sunday barbecue for local court and law enforcement personnel. Parker had taken me there in hopes of scaring up some business for PC&A, and much to my surprise, I had actually enjoyed myself.

Wilky—whose full name was Arlin Wilkinson—had hosted the party at his home, and was not the stereotypical lowlife bondsman you see in the movies. He was an articulate, well-dressed gentleman in his mid-fifties who spoke with a soft South Texas accent and seemed quite comfortable in his alligator boots.

He now waited for me outside one of Eastman's smaller hangars, his butt propped on the left front fender of a well-maintained Lincoln Continental that looked as if it had once belonged to his grandfather. He broke into a warm smile as I parked my Honda and started toward him across the tarmac.

"Please tell me you aren't one of those gals who gets her dander up when a fella throws a compliment her way."

"Depends on the fella and which body parts are involved."

Wilky chuckled. "There's that wit again. You were tossing it around quite a bit at that little shindig last month. That's why I thought of you when this job came up. Figured if anyone's a match for a smooth talking jackal, you're it."

I stopped next to the Lincoln. "Is that the compliment?"

"No, ma'am. What I was about to say is that Parker is one lucky son of a gun. If you weren't half my age, I might try to steal you from him. But then I've always had a thing for beautiful blondes."

"Thanks, but how do you know
I'm
not the lucky one?"

"I've seen you both in jeans."

He took me inside the hangar where a battered old twin-engine prop plane sat facing the open door. I saw the pilot through the front windshield, fiddling with the controls as he took a swig from a Thermos that I hoped contained coffee. He was in his mid-sixties, thin, sallow-faced, and looked in desperate need of a jolt from a defibrillator.

Was this some kind of joke?

The plane was even older and less healthy-looking than the pilot and I wasn't thrilled by the prospect of climbing inside.

Wilky grinned. "Don't you worry. It might not look like much, but it's safe." He raised his voice. "Isn't that right, Hap?"

The pilot looked up mid-sip and gave Wilky a vague smile and a thumbs up, but I couldn't be sure he knew what he was responding to.

"Hap's gettin' close to mandatory retirement," Wilky went on, "but he's one of the best. He's been handling runs like this for years. He can do a loop-the-loop in this little bugger without breaking a sweat."