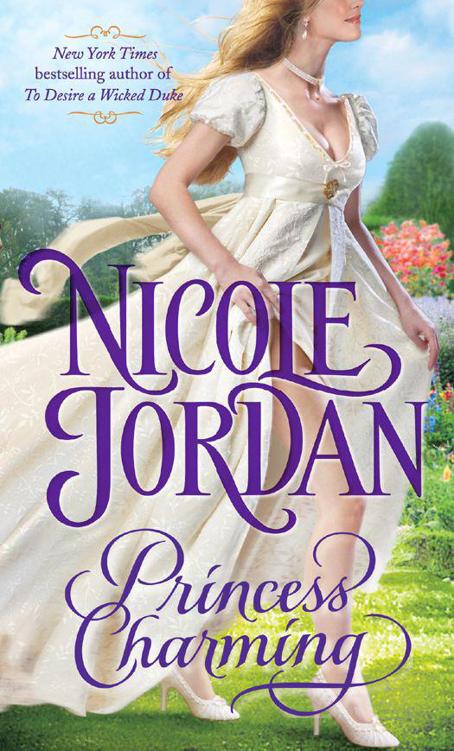 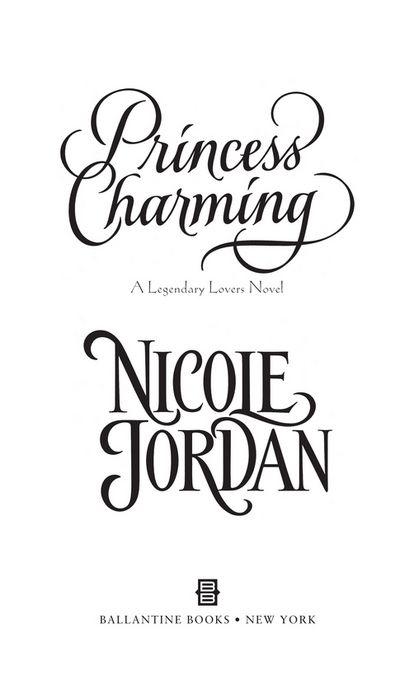 Princess Charming
reveals
a witty and sensual twist on the
classic Cinderella tale.…

Thanks to the mischievous meddling of his matchmaking sister, Ashton Wilde meets a damsel in distress during the midnight magic of a lavish ball. But Maura Collyer isn’t looking for a prince—or an intimate pairing with any member of the scandalous noble Wilde family.

Intrigued by Maura’s beauty and daring, Ash is determined to aid in the rescue of her beloved stallion, sold by her wicked stepmother to an evil viscount. As his adventure with Maura becomes rife with peril and passion, Ash suspects he’s found his heart’s desire.

Even though her dearest friend may be her self-proclaimed fairy godmother, Maura is mortified at being pushed into a romance with a notorious rake such as Ash. Dashing and charming, he comes to Maura’s rescue just in time to help her steal back her precious horse. As they flee across the countryside, she can’t resist his sweet seduction. But is her prince playing a role in a fairy tale to test an improbable theory, or is the love awakening in her heart proof of her own happily ever after?

Other Novels
The Lover
The Warrior
Touch Me With Fire

Princess Charming
is a work of fiction. Names, characters, places, and incidents are the products of the author’s imagination or are used fictitiously. Any resemblance to actual events, locales, or persons, living or dead, is entirely coincidental.

B
ALLANTINE
and colophon are registered trademarks of Random House, Inc.

This book contains an excerpt from Book Two of the Legendary Lovers series by Nicole Jordan. This excerpt has been set for this edition only and may not reflect the final content of the forthcoming edition.

Excerpt from
Lover Be Mine

To my newest dear friends and co-conspirators,

Thank you for helping me bring my passionate,

Pausing hip deep
in water, Ashton Wilde watched protectively as his four younger siblings and cousins frolicked in the lake at Beauvoir, the ancestral seat of the Marquises of Beaufort. Shrieks and squeals and peals of laughter filled the air when their game of water tag devolved into a pitched battle.

It was nearing summer’s end, but this was the first time in many months that Ash could remember feeling totally carefree.

He’d carefully arranged the outing—riding and fishing and swimming with an alfresco picnic in between—partly because the day was too glorious to spend indoors, but mainly because he wanted to re-create a sense of normalcy for his family, especially the two girls, who were much younger than the three boys.

A smile curved Ash’s lips at the tableau: Eleven-year-old Skye pushing seventeen-year-old Jack’s head underwater and Jack magnanimously permitting her victory. Katharine, age twelve, joining in the fray,
pelting eighteen-year-old Quinn with scoops of lake water. Quinn pretending to sputter and beg for mercy before turning for his revenge, which sent Kate racing out of reach, her mirth echoing around the shoreline.

They deserved to feel joyous again, Ash thought with satisfaction. In the past hour, two different servants had come to summon them home for tea, but he wouldn’t allow anyone to spoil this golden afternoon. For a short while at least, he was determined to restore the innocence of childhood that had been wrenched from them with the devastating deaths of all their parents in a shipwreck the previous winter.

Ash, who was almost a year senior to Quinn, had the heavy responsibility of being the eldest orphaned Wilde cousin, in addition to prematurely inheriting the illustrious Beaufort title and fortune.

Just now his own heart felt immensely lighter than at any time since the tragedy. Grief still remained a strong undercurrent in their lives, but for now it had been banished by cool water and hot sunshine.

Ash knew Quinn felt a similar bitterness toward the cruelties of fate after becoming the Earl of Traherne far too soon. The Beaufort and Traherne estates were situated in adjoining neighborhoods in Kent, so that even though Quinn and Skye hailed from a separate branch of the Wilde family, the distant cousins had grown up together as close as siblings. The proximity had also eased the merging of their two households under the legal guardianship of their middle-aged bachelor uncle, Lord Cornelius Wilde.

The anguishing loss of both sets of their parents had turned Quinn into a cynic at an early age, yet even he had gone along with Ash’s plan to provide
some much-needed moments of happiness for the girls, and Jack as well. Jack’s familial status was the oddity in the bunch—a first cousin to Ash and Katharine, but also their adopted brother.

“Take care, Ash! Quinn is coming for you!”

The screeched warning from young Skye interrupted Ash’s reverie just as he felt a hard tug on one leg and realized that a submerged Quinn had snuck up on him.

His balance upended, Ash went down with a mighty splash while swallowing a mouthful of lake water. When he surfaced, hacking, Quinn flashed him a wicked grin of triumph, which only provoked Ash into launching his own counterassault.

The Ultimate Merger by Delaney Diamond
Another Dead Republican by Mark Zubro
The Secret's Out (Hawks MC: Caroline Springs Charter, #1) by Lila Rose
1066 by Andrew Bridgeford
Country Boy 2 by Karrington, Blake
The Square by Rosie Millard
Stealing Flowers by Edward St Amant
From Potter's Field by Patricia Cornwell
The Hot Guy at the GOP Debate by Victoria Pearl
The Chocolate Book Bandit by Joanna Carl