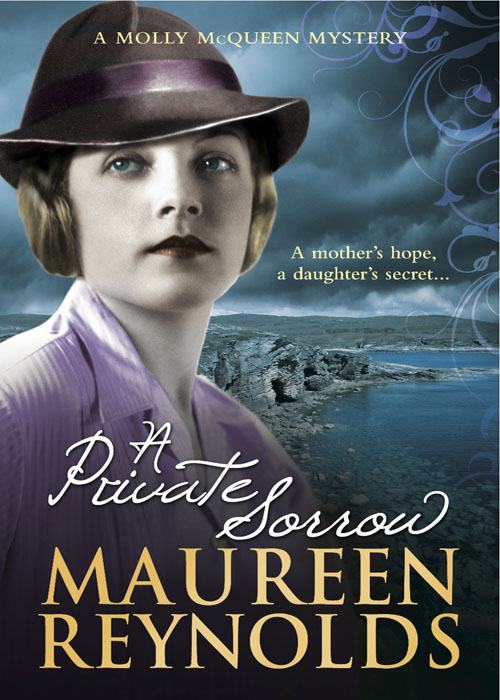 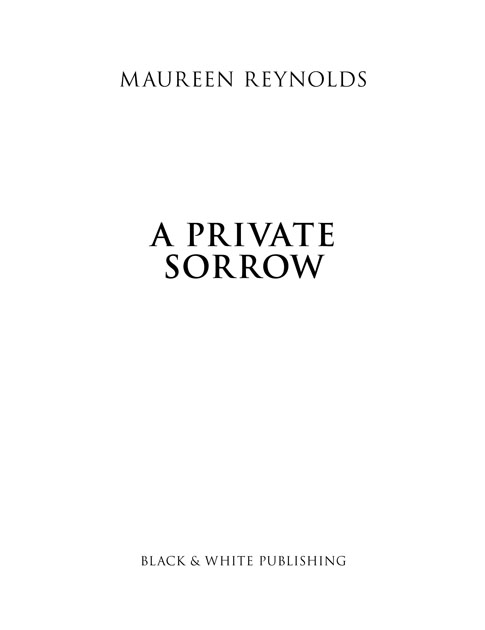 for all her support

Confession is good for the soul. Now where did that thought come from? Long forgotten Sunday school lessons, or maybe from one of the wayside posters that used to be found on noticeboards outside churches? Witty little sermons aimed at people passing by on their way to the shops? However, it was strange that this thought should appear now. It was almost as if the nightmares weren’t bad enough – the endless agony of terror before finally waking up in a cold sweat and the prospect of another long night without sleep. Confession is good for the soul. Now there was a thought.

‘This is déjà vu,’ said Molly, speaking out loud to the stepladder. ‘In a moment, Ronnie will appear.’

Two minutes later, he did. Molly was amazed by this spooky, familiar feeling. It was almost identical to starting her agency fifteen months ago but now she was overseeing renovation, which would turn the upstairs rooms into a flat, instead of painting the front of the shop. Once again Molly gazed around with a feeling of pride. The only job left was the painting of the walls, hence the reason for Ronnie’s presence. Ronnie looked just the same as he had fifteen months ago. His overalls were the same paint-spattered ones he had worn on that occasion and they hung from his thin body. He still had bad acne, red raised spots erupting on his neck and chin but he was just as cheerful as always.

‘I’ll finish the bedroom walls then make a start on the bathroom,’ he said, laying a large groundsheet on the floor and placing a selection of paint tins and brushes on it.

Molly took one last look around before leaving him to his job. She was pleased with the final result on these two previously unusable rooms. The large room had been turned into a kitchen and living room while the smaller one was the bedroom with the addition of a small shower room. When completed, it would save her the long, tedious journey to Newport every night. Also, it was her own private place and she almost hugged herself with delight. The feeling of déjà vu still persisted when she went downstairs to the office. Like the day in June last year when she opened the agency and had interviewed Edna and Mary, it was strange to be interviewing more staff today. Molly was nervous about this. Initially, the agency had been a secretarial venture but recent enquiries had indicated the need for domestic help and the three women coming today fell into this category.

The first two to arrive were punctual – a good sign. Mrs Watson and Mrs Charles also looked apprehensive, which amused Molly because that made three of them unsure of what lay ahead. Molly glanced again at the applications. Alice Charles was a young woman and although her letter said she was twenty-four, she looked older; a plain looking girl, tall and thin with a red, raw looking face that appeared as if she scrubbed the skin every day with a Brillo pad. Her companion, Maisie Watson, was much older. Her letter said she was fifty but she was thin and wiry and looked as if she had spent her life doing hard work.

Molly liked to be honest with her staff. ‘This is a new venture for me because I started this agency as a secretarial business but I’ve had lots of requests for temporary cleaning and household work. I’m not sure how many hours I can guarantee. It may vary each week so if you both need regular hours then I’m not sure if I can give you that.’

Maisie spoke first. ‘Well, I’m looking for work but would like some days to myself so I thought this job would suit me.’ She turned to Alice. ‘Alice and I are neighbours and she feels the same.’

Alice nodded. ‘I only got married two months ago so I’m looking for work that will tie in with my husband’s job. He works in the Caledon shipyard and he likes me to have his tea on the table when he gets home at six o’clock.’

Molly nodded. She was quite out of her depth with the thought of having to be home every night to get the tea on the table but she knew a lot of married women were in the same situation. ‘I expect any work you do to be of the highest standard and if you can’t do any day for some reason I would need to know in advance. You will also have to wear the agency overalls and treat the client’s home with respect. The work will be just the normal cleaning but should a client want a proper spring clean then I would send two of you to do this.’ The two women nodded eagerly. ‘If you leave me your dress sizes I’ll get the overalls ordered and if you would like to start next Monday at nine o’clock, hopefully I’ll have work for you both.’

After they left, Molly looked at the small pile of business cards on her desk. She had ordered more and they now advertised her as a Secretarial and Domestic Agency. Edna and Mary still worked for her and her friend Jean was now on the reception desk. Molly was very pleased with how busy the past fifteen months had been and she now hoped that with this new addition to the workforce she would be even busier.

The next interview wasn’t for another hour. After that she planned to phone Hamilton Carhartt’s factory to order the overalls. They had an industrial workwear factory at Carolina Port. She wanted royal blue overalls with the agency name on the pocket. Ronnie was still busy upstairs so she stayed in the reception to help Jean make out some invoices. Jean had started work last year, doing a few hours to help Molly out but she now liked the idea of having some extra money. Her husband gave her a generous household allowance but it was lovely to have something to spend on herself so she had taken on the job full-time.

At eleven o’clock sharp the door opened and a young blonde woman entered. Once again, Molly experienced that spooky feeling of déjà vu. It was as if she was looking again at Lena Lamont. Then the feeling disappeared when the woman spoke. Her voice was husky and slightly out of breath. Molly could also see that she was much younger than Lena.

‘I have an interview at eleven o’clock,’ she said.

Molly was confused. The interview was for a domestic cleaner and not a look-alike film star. Jean left to post the invoices so Molly ushered the woman to the chair by the window and she sat behind the desk.

‘I’m looking for someone to fill a post in our domestic side but perhaps you were looking for a secretarial job?’ Molly had noticed the well made-up face with bright red lipstick and matching polish on her nails; nails that looked as if they had never been contaminated by hot soapy water.

The woman laughed, a funny sounding deep chuckle that belied the exquisite creature. ‘I can’t do any office work, Miss McQueen. Not unless you want me to sit on a desk and do some photographic work. I’m an actress but I’m resting at the moment.’ She stopped to explain. ‘That means I’m between jobs in the theatre. I saw your advert for domestic work and I thought this would help me until I get another job and even when I do, I can still work during the day except if there is a matinee on a Wednesday and Saturday.’

Molly was still confused. ‘Is Deanna Dunn your stage name?’ The initial interview had taken place over the phone and Jean hadn’t got anything but the bare details.

‘No, it’s my real name. My mother was a great fan of Deanna Durban when I was born in 1936 but I love it and hope one day to be as famous as her.’

Molly explained the work and the overalls and to her surprise Deanna sounded eager. ‘That sounds great. Does that mean I’ve got the job?’

After she left, Molly wondered if she had done the right thing. Deanna was only eighteen and an actress, so how would she manage cleaning dirty and dusty houses? She decided to give her a chance and if it didn’t work out then she could always tell her there was no work for her. Maybe the part of a lifetime would appear on her doorstep and she would be too famous to need this work.

Edna and Mary were due to check in much later in the day but as Molly had a lot more invoices she could be doing at home, she decided to leave in the early afternoon. Ronnie said he would lock up and bring the key back tomorrow when he was likely to finish the painting.

She made her way to the ferry and home to her parents’ house in Newport. When she arrived, her father was pouring over travel plans. Her parents were going to spend the winter months in Australia.

‘We’re planning to travel up the east coast and see some of the country before going to visit Nell, Terry and Molly.’ Nell was Molly’s sister and she had had her baby last year. A girl called Molly. ‘Why don’t you come with us? It would do you good to have a holiday and see Nell and Terry again … and the baby.’

Molly had been down this road before, ‘I can’t. I’ve just started this new domestic side to the business and I have to be here to see it goes smoothly. Maybe some other time.’

Her father looked at her over the top of his glasses. ‘Mmm maybe,’ he said before gazing back at the tour book.

Her mother appeared from the kitchen. ‘It’s macaroni cheese for tea,’ she said. Molly looked at her in alarm. Once more the feeling that she had done all this before struck her as curious.

Later, as she lay in bed, she recalled what a strange day it had been. It was almost a carbon copy of her first day at the agency in Coronation week last year. She hoped it wasn’t going to be an omen of bad luck.

Edna was on her last day at Albert’s store. For the past few months she had been doing three days a week there. In a way, she was sorry to be leaving but she had other jobs to go to and she looked forward with pleasure to being at John Knox’s house next week.

Dolly Pirie came in with her friend, Mrs Little – or, as she was better known by her nickname, Snappy Sal. ‘I hear yon Nancy’s coming back,’ said Sal.

‘Aye,’ said Dolly. ‘Her job at Butlin’s holiday camp seems to be over.’

‘Albert, what was it she was doing in yon holiday camp?’ asked Sal, trying her best to be all sweetness and light.

‘She was working as a Redcoat,’ said Albert. ‘She had the job of entertaining the campers but the season is over and she’s coming back to work here until next year.’

Sal turned to Dolly. ‘A Redcoat! She’s more like a red nose with all the colds and flu she’s aye getting.’

Dolly gave her pal a quick dig in the ribs. ‘Shush, you better no let Albert hear you running down his niece.’