Promise Made (The Callahan Series) 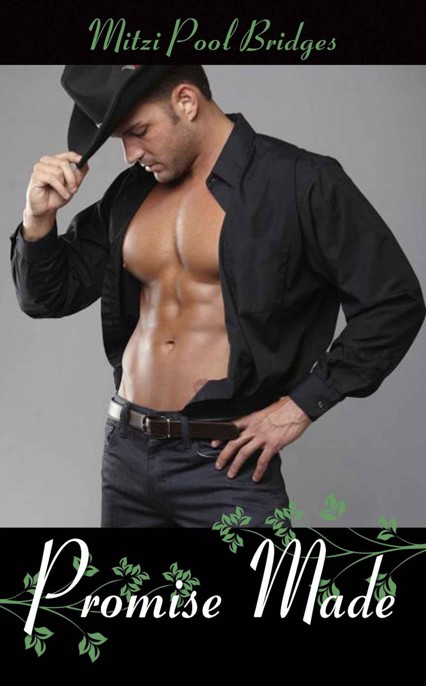 “
FIND MY BABY
is a rip roaring good mystery, with a surprising twist at the end...I loved the plot and characters, loved the mystery, and Mitzi Pool Bridges is now one of my new favorites.”

“FIND MY BABY
is highly recommended for being unique, well written, and a story that is nearly impossible to put down.”

“
FIND MY BABY
is riveting romantic suspense at its best. With an emotional subject that will touch any heart, the pace only grows stronger as the book continues. I'm adding this author to my watch list!”

“If you love a good, solid romance with strong family ties, set in rural Texas,
PROMISE BROKEN
will be one of the highlights of your year.”

“
PROMISE HER
...is an extremely good book and I would recommend it to those romance readers who love a strong heroine and a hero that would do anything to protect her... I also recommend reading the other books prior to this one in this series to get to know the secondary characters.”

For all my readers who love a good romance.

From horizon to horizon, stars, bright and abundant, scattered across the night sky. A full moon washed the familiar landscape in a soft glow.

Kaitlin Maroney could find her way without the bright beams of her Camry’s headlights.

She took a deep breath and let the beautiful night settle her nerves down a notch as she tried to negate the panic of the last few hours. A deep breath and that familiar sense of peace washed over her just as it had each time she returned to Oaktree, Texas.

She patted the pet carrier. “Almost there, Heidi. Not long now.”

Once she crossed the city limit sign her troubles seemed a million miles away. She wanted them to stay there.

From the carrier there was a soft purr. Kate chuckled. “I know how you feel.”

She couldn’t wait to get to Gram’s. Kate had so much to tell her. Would the telling be a worry for her gram? Kate hoped not. What she wanted was a sympathetic ear. Gram was good at that.

Kate smiled. She could almost taste the coconut cream pie and bowl of homemade potato soup sure to be there.

It was a comfort to know some things in life were predictable.

She let the driver’s side window down to catch a whiff of fresh, cool night air.

There was no place quite like it. Here she’d shake off the weirdness of her abnormal reaction to what should have been a normal situation. Plus, she’d just made a drastic change in her life and didn’t know where to go from here.

Her cell phone rang. She scrabbled in her bag, taking a few seconds to find her phone.

“Are you there?” Jenna asked. “You were supposed to call me, you know.”

Kate chuckled. “You worry too much. I’m at the city limits. It won’t be long.”

“I wish you had waited. We could talk about it.”

But Kate wanted, needed, to talk to her gram. Jenna was a dear friend, but she would have a hard time understanding what was in Kate’s head right now.

Red and blue flashing lights lit up her rearview mirror. She looked down at the speedometer and gasped in surprise. Yes, she was in a hurry, but she hadn’t realized... Her heartbeat kicked up a few notches. Was it him? No. This late at night he’d be home, not handing out tickets to speeders. That was for rookies.

“Gotta go. I think I’m going to get a ticket for speeding.”

When she pulled over and those lights followed right behind, her heart was in her throat. She watched closely as the car pulled in behind her, blue and red flashing in the inky darkness.

From her rear-view mirror, she saw the door open. She braced herself. In the side mirror, a man approached. A big man in uniform. Her heart did a quick dance as he stopped at the back of her car to jot down her license number.

Don't let it be him!
After the drama of her life lately, she couldn’t handle it.

But what if it was? How could she have forgotten the downside of going home? It didn't matter. She’d made peace with her decision long ago. She’d have to face him again sooner or later. Although later would be better. Much later.

She took a steadying breath. Waited. Perhaps she could talk him, whoever
he
was, out of the ticket.

Or maybe they’d grown tougher on speeders. The one-horse-town she’d grown up in needed all the money it could get. Tickets would be a good way for Oaktree to bolster their meager funds.

For a moment, she leaned her head back against the seat. “We don’t need this, Heidi.”

Footsteps crunched on gravel as they headed her way. Kate reached for her purse and resigned herself to the inevitable. After all, she
had
been speeding. She took out her license, and opened the glove box to get her insurance papers.

“Got some kind of emergency, ma’am?”

Kate’s heart stopped, then started again in an erratic rhythm. She’d recognize his voice anywhere. On the light breeze, his familiar scent carried through her open window. Memories wafted her way. Memories she didn’t want or need.

He was the last person she wanted to see. They were on different paths, had been for a long time. Hadn’t Gram told her his engagement was imminent?

Kate had deliberately avoided him these past five years. It wasn’t hard to do. Her visits had always been quick because of her job. In and out. This one could be the same. Or maybe not. She didn’t know. Since she owed him a long overdue apology and explanation, this encounter could be more than uncomfortable.

Willing herself to act the sophisticated attorney she hoped she was, she turned and smiled.

He stood there, all six feet of him: his Stetson low over his forehead, a gun strapped to his waist, a flashlight in his hand. “Hello, Dugan,” she said, with a smile in her voice. If there was one thing she was good at it was control. She’d mastered that trick long ago. No matter how upset she was she could count on that control. Always.

Dugan Callahan pushed his Stetson back and leaned toward the car. She caught the familiar scent again, the one that had always been Dugan’s. Spicy aftershave, soap, and coffee.

“Kate...is that you?” He shined the light in her face.

“Didn’t know you were slated for a visit.” His voice was low, a touch of anger in it. What did she expect? A welcome-home party?

She handed him her papers. “I missed Gram. We don’t see each other nearly enough.”

“Saw her today, she seemed to be fine.”

Kate wasn’t accustomed to this crisp, professional demeanor. Not from Dugan. It was far removed from the young man she’d known and loved.

She sat up straighter, looked at him. The only light came from the headlights of his patrol car and his flashlight, but she could feel those green eyes bore into her. Funny how after all this time he could still rattle her. “Gram’s fine.”

Heidi decided it was time to let out a howl.

“Jeez!” Dugan’s flashlight found the source of the noise. “Still have Heidi, I see. She doesn’t look too happy.”

Stiff. That’s how she’d describe him. “Maybe she knows I’m getting a ticket.”

He tucked the flashlight under his arm, scratched on his pad as if he didn’t hear.

So much for past lovers.

She wasn’t one bit surprised.

Dugan willed his hand to still.

Kate was back for a visit. Anger welled up inside him like a smoldering volcano.

Over the past five years, she had visited her grandmother, Grace Stockwell, often, the visits so quick he hadn’t seen or talked to her. Just like he wanted. Now, here she was, barely two miles inside the city limits.

What luck. He wanted to vent. Instead, he choked back the bitterness.

He wasn’t supposed to be on duty. Jonathan Eubanks was. Only Eubanks was home with the flu.

Dugan had almost let her go. Now he wished he had.

With a quick flick of his wrist, he tore the ticket loose and handed it through the window. He found it hard to speak. What did you say to a former lover, the woman you’d asked to marry you—the woman who stood you up at the altar? What did you say to a woman who ran out on you without a word of explanation while the town watched, wondered, and gossiped?

“Slow it down,” he managed to say, but his voice was not his own.

“I will,” she answered with a sigh.

Once this woman had been his Kate. Now she was a virtual stranger. So why the anger? He thought he’d gotten over that long ago.

She’d changed some. From what he could see from the dim light of the car’s interior and his flashlight, she was prettier than ever. Grace had told him Kate worked for a mid-size, respected law firm and was doing well. Which didn’t surprise him in the least. Kate would do well in anything. Except keep a promise.

“Thanks, Dugan.” She stuffed the ticket, along with her license and insurance papers in her purse. Then, she looked over her shoulder and with an offhand wave pulled back onto the highway.

He watched her go, tried like hell to still the anger in his heart. He shouldn’t be this upset over a chance encounter.

He walked back to his patrol car, kicked a tire.

She wasn’t the same Kate she’d been back then. This Kate was more sophisticated, more urbane. Why wouldn’t she be? She’d been in Austin all this time. Not in this small, nondescript town. So yeah, she’d outgrown them. She’d outgrown him.

He took off his Stetson with one hand, ran the other through his hair before settling it back in place.

Grace didn’t say a word today about Kate’s visit. As was his custom, he’d been by her place, mowed the lawn and changed a light bulb, then shared a piece of pie and a glass of tea. Not a word about Kate.

But then she wouldn’t.

Grace seldom mentioned Kate. Not because she didn’t adore her granddaughter, but because she was astute enough to know that to bring up Kate’s name might upset him.

Dugan glanced at his watch. Midnight. His shift was over. He’d go home, get a little sleep and forget Kate was back in town.

She'd be gone again in forty-eight hours or less anyway.

That much he
could
count on.

Dugan’s morning run had netted six encounters of the nosy type. All had given him the same message. Maybe not the same words, but similar. “Guess who’s back in town?”

Outrage by Robert K. Tanenbaum
Our Endless Numbered Days: A Novel by Claire Fuller
Tooth for a Tooth by Frank Muir
Finding Charley (Full Circle) by Peeler, Casey
Master of Chains by Lebow, Jess
Conversations With Mr. Prain by Joan Taylor
And All That Jazz by Samantha-Ellen Bound
The Flood-Tide by Cynthia Harrod-Eagles
The Niagara Falls Mystery by Gertrude Chandler Warner
Learn to Read With Great Speed! by Michal Stawicki