Read Promises (Book One of The Syrenka Series) Online

Promises (Book One of The Syrenka Series) 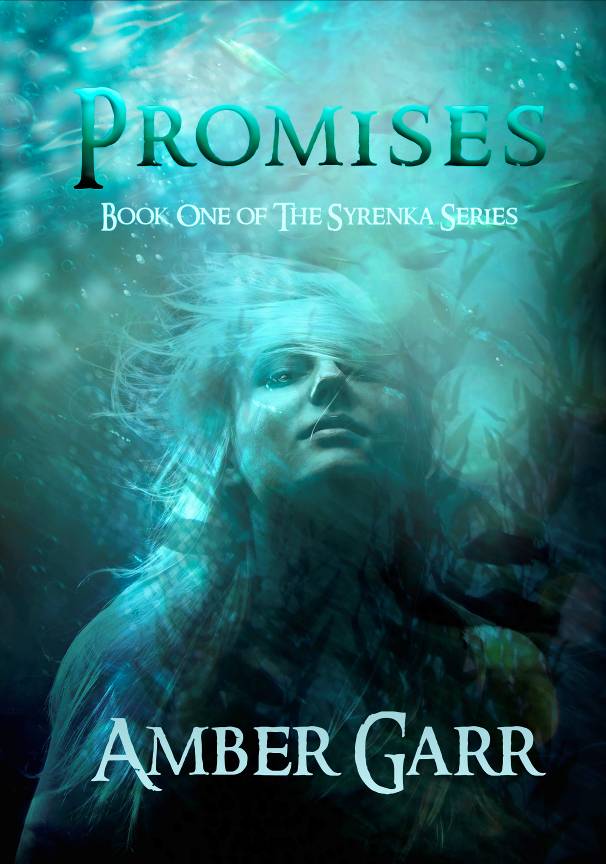 Book One of The Syrenka
Series

This is a work of fiction. The names,
characters, places, and incidents are products of the author’s
imagination or have been used fictitiously and are not to be
construed as real. Any resemblance to actual persons, living or
dead, events, or locales is entirely coincidental.

All rights are reserved. No part of
this book may be used or reproduced in any manner whatsoever
without written permission from the author.

I would most graciously like to thank
my group of beta readers who have taken time out of their busy
lives to help make this book possible. To my mom, Sandy, Elizabeth,
Jocelyn, and Erin…I can never thank you enough for your
encouragement. This is something that means a lot to me and I am so
glad that you have been a part of this process. And also thanks to
my friends and coworkers who have been tremendously supportive of
my endeavor.

I barely heard her parting words as
the screen door slammed shut. My head was spinning in desperation
as the anger coursed through my bones. “Get back in here Eviana!”
she continued to scream at me. “We are not finished with this
conversation!”

I was already racing down
the deck stairs towards the sandy beach, kicking off my shoes and
unbuttoning my blouse.
We are for
now
, I thought as my blood boiled with rage
and resentment. I was going to be trapped! How dare they? This was
not the eighteenth century anymore! I had
rights
!

I stumbled onto the sand, taking just
a brief moment to savor the warmth and the feeling of the grains
massaging my toes. My shirt came off and I started to unzip my
jeans. No one was around. But I wouldn’t care anyway. The water was
calling me and it was the only voice that I could hear now. With
one pant leg off, I hopped along in my forward progression until
the other one was free. My oasis was so close now that I could
taste the salt in the air. The sun broke free of a cloud, stopping
me for a moment. It was late afternoon and the sunset was still a
few hours away, but the sky was already turning multiple shades of
pink and orange; the coloration reminding me of the inside of a
brilliant conch shell.

I closed my eyes and took a
deep breath. I knew that there was going to be hell to pay when I
returned to the house. Marguerite, my mother, had tolerated my
rebellious behavior when I was younger, giving me more freedom and
second chances than anyone in our clan. But apparently now, at
seventeen, I was an adult. Adult enough to bear children. Adult
enough to participate in clan gatherings. Adult enough to navigate
our youth through their transition period. But
not
adult enough to choose who to
love.

A slight breeze wafted off the ocean,
bringing with it scents that filled my gut with longing. The
freedom of the ocean. Why couldn’t I just stay there forever? A
gull called overhead, beckoning me to join him. The splashing waves
calmed my inner rage as they ebbed and flowed in a hypnotic
pattern. A distant moan of a shipping vessel reminded me of our
history. I opened my eyes to see that I was standing alone along
miles of sandy beach interlaced with large rocks and cliffs
emblematic of the northern California coast. So beautiful. I
stripped off the rest of my clothes and ran into the
ocean.

As soon as I was under the water, I
could feel the transition begin. My lower body ached as the bones
adjusted from a life on land to one at sea. Both legs began to fuse
together and work as one. My foot bones elongated while I prepared
for the agony. I was accustomed to the changes now, but it was
still a struggle of mind over matter. Breaking through the surface
of the water, I grabbed one last breath before the final jolt of
pain ravaged through my body. I bit my bottom lip and squeezed my
eyes shut willing the moment to be over. At last I felt an electric
tingle move from my hips to my toes as the hardened iridescent,
scales appeared on the bottom half of my body. I opened my eyes to
find that the internal transformation was complete as well. My
vision cleared. My lungs expanded. I could hear for miles. I was
free.

So I swam. I swam away from the shore
and the house that I lived in. I swam away from my fears and
obligations as though they could disappear with the distance. I
would temporarily forget my responsibilities, my duties, and the
argument with my mother. In here, I wasn’t trapped. The sea was my
true home. I was a mermaid and this was my world.

The sun was breaking through the
water, highlighting the kelp and creating a kaleidoscope of light
beams piercing the blue depths of the ocean. Gathering up all of
the negative energy, I smiled and thrust that power into my
movement. I darted over and under and around the light beams,
challenging myself not to hit any of the massive algal trees. I
chased the fish and raced with the sea otters, laughing as they
tried to decide if I was friend or foe. My hair flowed behind me
like a golden cape while I dove to the sea floor and skimmed over
the bottom like a fighter jet. In a daring move that most of my
clan members would find disgraceful and childish, I pumped my tail
and hurdled towards the surface. As I broke free from the water, I
caught a glimpse of the shoreline miles away where my house was
barely visible. Flying through the air like a circus performer, I
gathered my breath just before diving to the ocean depths once
again.

My body relaxed as I
slipped into a more peaceful swimming pattern and let my mind drift
away. I didn’t need to speak. I didn’t need to listen. I
just
was
. I turned
back towards the shore but began to move diagonally to the north. I
knew this section of water well. Every rock outcropping, kelp bed,
and reef was a marker on the map in my labyrinth of a mind. The
ocean was calm today, allowing me to see nearly a hundred feet
around. I stayed close to the bottom, rising and falling over the
contours of the seascape.

I was nearly to my destination when a
shadow darted over my head. It caused me to stop and spin around so
fast that my hair tangled in my face. As I struggled to move it
away from my eyes, I tried to sense if something was around me.
Although mermaids were pretty much at the top of the food chain in
this part of the ocean, our natural animal instincts were hard to
suppress.

I closed my eyes and tried to listen
for movement or feel for the electrical pulses all living creatures
exude. Nothing. My hair was so wrapped up around my face that I
kept my eyes closed and used both hands to separate the knotted
mess. Finally, I broke free from my temporary imprisonment and when
I opened my eyes, a large seal was staring at me just mere inches
away from my face.

While trying to stifle a scream, he
looked into my eyes, cocked his head slightly, and blew a rush of
bubbles into my face. I grabbed for him with both arms, trying to
capture his massive body, but instead my hands just barely grazed
his tail flippers. He slipped past me and darted to the surface. I
raced after him while we both grabbed a quick breath, thinking that
this was my chance to slow him down. But he was too quick, and
before I could get my head back under the water, I felt a jolt
against my stomach as he tried to toss me into the air.

He failed and I was able to make a
quick snatch of his side flipper that yanked him back towards me.
We twisted and turned and jockeyed around each other; each trying
to get the upper hand. When we would get close to crashing into the
sea floor, we’d change direction and struggle back towards the
surface. It must have looked like a bubble torpedo oscillating
through the vast emptiness with no target in its sites.

I suddenly pulled free from the seal
and took off as fast as I could towards the nearest kelp bed. He
was too quick and managed to nip my tail just as I flitted into the
great forest. We dodged and dived between the leaves. I was fast,
but he was more agile with his sleek body shape.

Sensing my imminent defeat, I tried
one last maneuver. Wrapping my hands around the largest trunk of
algae I could find, I used all of the strength in my arms to swing
my body around behind it. The movement caught him by surprise and
he was swimming too fast to correct for it. The seal sailed past me
but before he could turn around, I bounded out with one powerful
kick. Jetting over him, I encircled my arms around his neck and
maneuvered my body over his back. He flipped around several times
trying to knock me free, but I had him. I felt a laugh rumble
through his body as he slowed to a casual swimming pace, ultimately
conceding defeat. Smiling, I nestled my face against his neck as he
carried me away.

We came to a small rock island a few
miles offshore. On the west side, a tiny gravel littered cove was
nestled in between two high cliffs, effectively blocking the view
to the east. The setting sun cast shards of orange, red, and purple
against the volcanic sheets of rock like a giant gothic crystal
prism. This side of the island was hidden from the shore. This side
of the island was our sanctuary.

I let go of my fury chariot and sat in
the shallows while concentrating on my transition. Turning back
into human form was always easier for me and in just a few moments
I was walking on two legs again. I watched the seal hurl himself
out of the water and onto the rocky shore. He glanced my way,
snorted, and turned his back to me. In a move so graceful it could
only be magical, the seal pushed back onto his hind flippers…and
became a human.

The fur coat fell from his body as he
took a deep breath; his face upwards towards the cliff. Even from
behind, he was breathtaking. We’ve known each other since we were
kids and every time I saw him my heart jumped and my stomach
fluttered. I started to move towards him, oblivious of my nakedness
and captivated by his. It wasn’t an issue in our world and
especially not at our sanctuary. The human body was just a part of
who we were. He turned his head slightly and sighed, but I could
see the smile from where I was.

Day of the Shadow by Rob Kidd
The Londoners by Margaret Pemberton
Save Me by Abigail Stone
Final Sacrament (Clarenceux Trilogy) by Forrester, James
She Thinks My Tractor's Sexy by Cara North
Hell House by Richard Matheson
Remains to be Seen by J.M. Gregson
The Witch's Halloween Hero (Nocturne Falls) by Kristen Painter
Lover's Road by E. L. Todd
Every Other Day by Jennifer Lynn Barnes