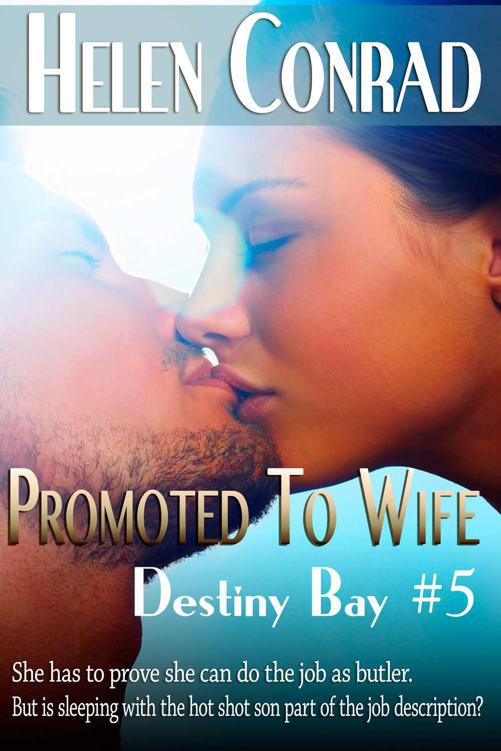 This novel is a work of fiction. Names, characters, places and incidents are products of the writer’s imagination or have been used fictitiously and are not to be construed as real. Any resemblance to persons, living or dead, actual events, locales, or organizations is entirely coincidental. All rights are reserved. No part of this book may be used or reproduced in any manner whatsoever without written permission from the author.

She has to prove she can do the job as butler.

But is sleeping with the hot shot son part of the job description?

Terry Yardley is trying to keep her father’s butlering job open for him until he recovers from an accident by doing the work herself.

Cleaning and preparing for a ball she can handle, but no one told her she would have to deal with a blow up doll, a set of hard-to-handle children, Rick’s Aunt Julia and the very sexy Carrington gentleman himself.

Book 2-Wife For a Night

Book 3-Too Scared to Breathe

Book 6-Not the Marrying Kind

His wife is
Grace Carrington
, an internationally known poet.

Kathy Carrington
~oldest daughter of Dr. Stephen, Kathy was expected to do great things—but what she was best at—swimming—didn’t quite fit the roadmap her father had for her, and he let her know she was a disappointment at every turn.

Jason Harper
~known as Jace, he’s a former Olympic swimmer and Kathy’s idol from the days when she was winning.

She proves herself to him daily in so many ways, even if her father is still blind to her true worth.

Rick Carrington
~ a widower with two young children who scare him to death, and a yen for good practical jokes.

Who could have guessed he might fall in love with the butler?

She’s only taking her father’s place until he’s well enough to take over, but she soon finds herself falling for Rick, as well as his children.

Jeremy~
The five year old boy who carries around a koala bear and secretly loves his dad.

Erica
~Rick’s twelve year old daughter, a faux sophisticate at a young age and seemingly quite disgusted with her situation.

In truth, she’s in emotional pain and doesn’t know how to fix it.

Shelley Carrington
~the baby of the family developing a career in clinical psychology and trying to convince herself she has no time for men, a sad lie Michael Hudson will have to deal with in the next book,
Not The Marrying Kind
.

Reid Carrington
~ambitious attorney determined to restore the reputation of his family after his father’s scandal almost ruined them.

Jennifer Thornton
~who grew up next door to the Carringtons, but left in order to save her parents from heartbreak.

Now she hopes to bring her family new joy with the birth of her baby.

Matt Carrington
~has been gone for years after a rift with his father sent him into undercover work in Los Angeles.

He owns hotels in Destiny Bay and Hawaii and is now married to:

Janet Cardona
~a lovely young woman he met while running a major con on a swindler.

She almost ruined his operation but ended up changing his life instead.

The baby she’s carrying will bring them even more changes.

Grant Carrington
~always a rebel, Grant went against his father’s plans for him and became a race car driver whose championship career was recently in jeopardy over serious injuries—physical and emotional-- suffered in a crash.

Calvin Carrington~
Dr.
Stephen’s father, grandfather to most of the younger Carringtons, lately living in a senior home but coming back to stay in his mansion in Destiny Bay
.

Johnny Carrington~
Rick’s favorite cousin and his best friend, always ready with a joke or two.

Tag Carrington
~a Carrington cousin, younger and more adrift, he lives mostly on his boat and avoids all risk of becoming a responsible adult.

He loves Mickey but is allergic to commitment and trying to stay out of the way of her happiness.

Missy Carrington
~ Missy and her brother Tag spent too many years being hauled around the countryside as children by their hippy mother and now pay the price.

Mickey Adams
~owner and proprietor of Mickey’s on the Bay, a local café where the Carringtons tend to hang out.

She’s hopelessly in love with the much younger Tag and torn between him and the wealthy man who could make the future so much brighter for her and her child:

Robert Harding
~wealthy financier who wants to make Mickey his own.

Terry Yardley held her breath and listened. Someone was coming up the long, circular driveway to the old Carrington mansion. No one was supposed to be here until Saturday.

She’d counted on a good two days to get things under control—and to work up an explanation as to why she was here, and not her father—the real butler.

She set down her feather duster and looked around at the long, carpeted hallway. She'd just finished dusting the family portraits that lined the hall, polishing up each ancient Carrington, getting them ready to greet their current family members. Ordinarily this work would have been assigned to the maid, but no maids had appeared as yet, so Terry was doing it.

Why? Because she was the butler, that’s why.

She’d known from the beginning it was going to be tricky pulling this off. Butlers weren’t usually female. Especially not young, relatively attractive females such as she was—if she did say so herself. But she had to make this work. She owed as much to her father. She had to save his job for him.

She knew people were going to frown. If there was a woman in the family group about to arrive, she might do more than that. She knew the risks and she was prepared.

That is—she thought she was. Once she got to the Carrington mansion and began going through the place, the size and scope began to scare her. Could she really pull this off?

And then she’d heard the car. This was too soon! She wasn’t ready. But maybe it was just a delivery. Or the chimney sweep she’d hired. Sure, that was it. Had to be.

She rushed to a window and looked down from the second floor bedroom, expecting to see a workman's van. Instead, her wide eyes took in the purring approach of a low-slung, candy-apple-red Ferrari.

“Scratch the relief,” she whispered to herself, goose bumps prickling across her skin, “and prepare for a com
plete freak-out. The Carringtons have arrived.”

She pulled back from the window and tried not to hyperventilate. It was going to be okay. She had to be cool. She had to project dignity. After all, butlers were figures of calm and authority.

And improperly dressed!
Terry turned to look at herself in the enormous mirror at the end of the upper hallway. She was wearing tiny white shorts that barely covered her bottom and
a plaid, cotton blouse that was missing two buttons.
She'd pulled out the ends to tie in a big knot between her breasts—and that gave quite a revealing view of her flat, tanned stomach. Her long, smooth legs made her look like a Spring colt—or filly might be more apt. Staring in horror at the mirror,
Terry knew she was scantily clad for a meeting with the
master of the house.

“What's wrong with this picture?”

That's what she
looked like. It was no good. There was just no way the
Carringtons were going to believe she was the new butler.

Hamish Macbeth 20 (2004) - Death of a Poison Pen by M.C. Beaton, Prefers to remain anonymous
Lying and Kissing by Helena Newbury
GladYouCame by Sara Brookes
The Tycoon's Make-Believe Fiancee by Elizabeth Lennox
Detective Wade Jackson Mystery - 01 - The Sex Club by L. J. Sellers
A Husband in Time by Maggie Shayne
The First Cut by Knight, Ali
The Unwanted Conti Bride (The Legendary Conti Brothers) by Tara Pammi
The Half Life of Stars by Louise Wener
The Valentine Wedding Dress by Sherryl Woods