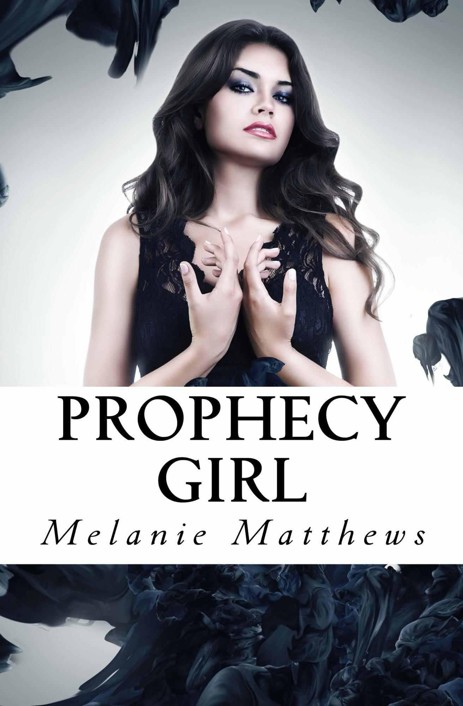 Prophecy Girl
is a work of fiction.

Any references to historical events, real people, or real places are used fictitiously.  Other names, characters, places, and events are products of the author's imagination, and any resemblance to actual events or places or persons, living or dead, is entirely coincidental.

All rights reserved, including the right to reproduce this book or portions thereof in any form whatsoever without written consent from the author.

“How are we feeling today?”

Eva Nolan resisted the urge to roll her eyes, staring at Dr. Quincy Lang, with his receding gray hair and facial tick. He asked that question every morning, and always said “we” as if she had a split personality. She didn’t, but some of her fellow roommates did. She knew that she wasn’t mentally ill, but for six months now, she had been living at the Miami-Dade Psychiatric Youth Hospital. Ward Number Nine was a brightly lit hallway with smiley face wallpaper, where other teens were suffering from hallucinations and depression.

But…there was something wrong with her.

She sat cross-legged on her bed with starchy white sheets on a creaky metal frame. Her bed was against a sky blue wall that was peeling. Some expert said that blue was a calming color. Eva wondered why everyone wasn’t miraculously sane.

Dr. Lang leaned forward, sitting on a wooden chair with a wobbly leg, next to her desk. It was a place she often sat while reading books, but lately, the fiction had become as flat as the pages it was printed on.

“Really?” he asked, raising his eyebrow. “Kate tells me that you didn’t eat breakfast this morning.”

He held on to his metal clipboard, fountain pen to paper, ready to jot down her answer, as if today, yes today (!) would be the day that he was finally going to figure out what was wrong with her.

Eva really liked Nurse Kate, despite her tattle-telling, but she was just doing her duty.

“The eggs were soggy, the toast was burnt, and the orange juice was water with floating pulp,” she continued in her bland tone.

Dr. Lang smiled. He had yellow teeth from years of drinking coffee, exchanging it for meals.

“I know it’s not the best, but you should eat. Did you take your medication?”

She always took her medication, hoping those magic pills would do it, but no, not today. Not in the past six months.

What pill could prevent her from seeing people die? A man was stabbed forty-seven times with a knife. Eva counted each time the blade entered. A woman was shot. Eva saw the blood fly out of her head. A family burned to death in a fire. Eva heard their horrific screams.

She cried for many hours. Who wouldn’t after seeing that? But even when she tried to stop, exhausted from it all, she couldn’t. It was like a force was
making
her cry. She cried and cried, until her eyes were puffy and blistered.

Good thing no one at the hospital cared about how a pale, skinny, and average height fourteen-year- old looked, with long black hair, and wide emerald eyes.

The one good consolation was that she was never in any physical pain—no headaches. But the mental anguish was enough. More than enough.

“When is the last time you had a vision?”

As if he didn’t know. The whole hospital could hear her crying.

“Care to talk about it?”

She shook her head. It was too painful to talk about, but she remembered every detail.

A car was sliding back and forth across an icy road with a panicky driver, an old woman, desperately trying to control the metal beast, until it finally won, flying off the cliff. The car went gracefully for a while, and then began to plummet, finally crashing on the road below. The old woman died quickly.

That was some comfort to Eva, but not much.

“Maybe next time?” he said hopefully.

Instead of answering, she just shrugged in her baggy white hospital shirt with pants to match, and heelless slip-on shoes. If there were any cute guys around, she would feel so embarrassed in her bland outfit.

He nodded, clicked his fountain pen, and then placed his trusty writing instrument in the front pocket of his long white coat.  He looked like a mad scientist, ready to conduct an experiment with vials and flasks of bubbling liquids. But she knew the only flask he really liked was the one that held his whiskey. He hid the smell with coffee, sprinkling mint leaves in the brew. It didn’t fool anyone, but he was never drunk, which was one attribute Eva could respect in him—the only one.

Dr. Lang wasn’t one for goodbyes, so he just nodded again, held his notes to his chest, and left her room. He closed the heavy white door behind him with a little window at the top that stayed open. It allowed anyone to peek through, so they could witness the freak show that was Eva Nolan—the girl who thought she saw people dying, and wouldn’t stop crying about it.

No one believed her. Not even her divorced parents, who on Dr. Lang’s advice, allowed for her to be “voluntarily committed.” Dr. Lang thought that Eva was making up the visions, acting out to get the attention of her parents, so that they’d get back together.  Wrong! The only one who believed her was Soledad Morales, her best friend. And today, she was coming to see Eva.

The Visitors Room, which also doubled as the Recreation Room for the residents, was bathed in pale yellow—another “calming” color. The walls had been painted pea green before that, so when the paint chipped and fell off, it reminded Eva of diarrhea.

She sat at a small table that was slightly warped, slanting sideways. The TV was on mute. They were only allowed to watch cartoons, but Eva didn’t know why, since most of them were violent. Movie night consisted of animated films. She assumed that Dr. Lang didn’t consider little fish being chased by a shark as potentially nerve-racking to his patients.

While she waited, she set up a checker game, playing by herself. Unsurprisingly, she won every round.

Eva knew that voice. She smiled and turned to see her best friend Soledad, wearing a red halter top dress, despite it being February, but Miami didn’t suffer from the cold like other places. Her light blue eyes seemed brighter, her caramel skin glowed, and her soft brown hair was in a long ponytail.

Soledad held out her arms. Eva launched to her, holding her friend tight. When they let go, Eva couldn’t hold back her tears.

Soledad furrowed her brow. “Did you have…did you see something?”

They sat down at the table, and Eva cleared away the checkers. She just stared at Soledad, who looked gorgeous even when she had the flu, and snot ran from her nose.

Eva had her first vision about eleven months ago, towards the end of her eighth grade year. She dropped down to the dirty-tiled floor of the girls’ bathroom, witnessing a girl, in her
mind
, jumping off the roof of a building, and then landing on the street below, with her bones making a horrible cracking sound, and her blood splattering all over the concrete. When the vision was over, Soledad sat with a sobbing Eva, and told her everything was going to be all right. Eva had two more visions at school. The other students called her “freak” by this point. She had another at home before her parents had her lovingly committed.

Eva grinned. “So what’s up? What’s going on in the world? Tell me
everything
!  No matter how boring!”

Soledad shrugged. “Nothing much. I’m excited to get the ninth grade over with!”  She smiled. “I can’t wait to be a sophomore!”

Eva had missed her entire ninth grade year, as well as the once in a lifetime delight of saying, “I’m a high-schooler!”

“I don’t think you’ll see me there,” Eva said in a melancholy tone.

Soledad held Eva’s hand. “Oh! No, chica! They can’t keep you here forever. What do the doctors say? Have they found a cure?”

Eva pulled her hand back, angry. “A cure?! I’m not riddled with some disease! I see people dying! I cry until my eyes are sore and my skin is blistered! What kind of cure is out there for that?!”

Soledad nodded. “Yeah, weird.” She shrugged her bare caramel shoulders. “I don’t know what to think. What about your parents? Have they come to visit this week?”

Eva shook her head in response.

At first, her parents used to come all the time, but now it was only twice a month. That was Dr. Lang’s orders. He thought that if her parents visited too much, she’d react by having her “visions” just to show her parents that the good doctor couldn’t help her, and she’d be released. Well, he couldn’t help her. After six months, she kept seeing people die. All his diplomas couldn’t fix her. All his mugs stating “World’s Greatest Psychiatrist” were useless.

“I think they’re coming next week,” Eva answered, “but they said it wasn’t definite.”

They chatted some more about movies, music, boys, and life. They laughed.  They joked. They played checkers. After an hour, visitation privileges were over, and her best friend stood up to leave. Eva gave Soledad a long hug, sad to see her best friend go.

“When are you coming back?” she asked, desperately hopeful.

“What do you mean, you don’t know?” Eva asked softly.

Soledad shook her head. “It’s not me. It’s my parents. They think that I shouldn’t be around you…that you’re dangerous. I was allowed one last visit.” She nodded towards the exit door. “They’re outside waiting on me, and they’ll worry if I don’t come out soon.”

“But-but I’m not dangerous,” Eva stammered, crying. “I would never hurt you, and I’ve never hurt anyone.”

“I know chica, but they just don’t understand,” Soledad said, crying too. “I tried to tell them that they were wrong, but they won’t listen. I’m sorry, Eva. I really am, but…but I won’t be coming back.”

Soledad tried to hug her again, but Eva took off running out of the Recreation Room, and back to her bedroom. There, on her creaky metal bed with scratchy sheets, she cried against her flat pillow—but not for the deceased. She cried for the betrayal of her friend, the absence of her parents, and the prison she was forced to live in.

The Man with the Shamrock Pin

Six months later, Soledad kept her word. She didn’t return. Eva threw away all her letters. After awhile, Soledad got the hint, and Eva’s wastebasket was now only filled with discarded tissues.

It was August thirty-first, Eva’s fifteenth birthday, and the first day of high school. She thought about Soledad, wondering if she was excited, if she had a new best friend, if she had a senior quarterback boyfriend, if she was having trouble opening her locker. Eva wanted to cry at her injustice, but held back. She didn’t need Dr. Lang taking more notes. Already, he had two file cabinet drawers devoted to her.

Eva’s parents were supposed to have arrived to celebrate her birthday, but apparently there was some crisis at her dad’s bank, where he was the manager, and her mom, being a school teacher, couldn’t abandon her new kindergarten students on their first day.

Eva thought back to her time in kindergarten when she first met Soledad. They both wanted to play with the same toy, but instead of fighting, they shared. They had been best friends ever since. Except now. She still couldn’t get over Soledad’s betrayal, even though her parents were to blame. To Eva, Soledad should’ve stood up for her friend, but she gave in to her parents’ demands.