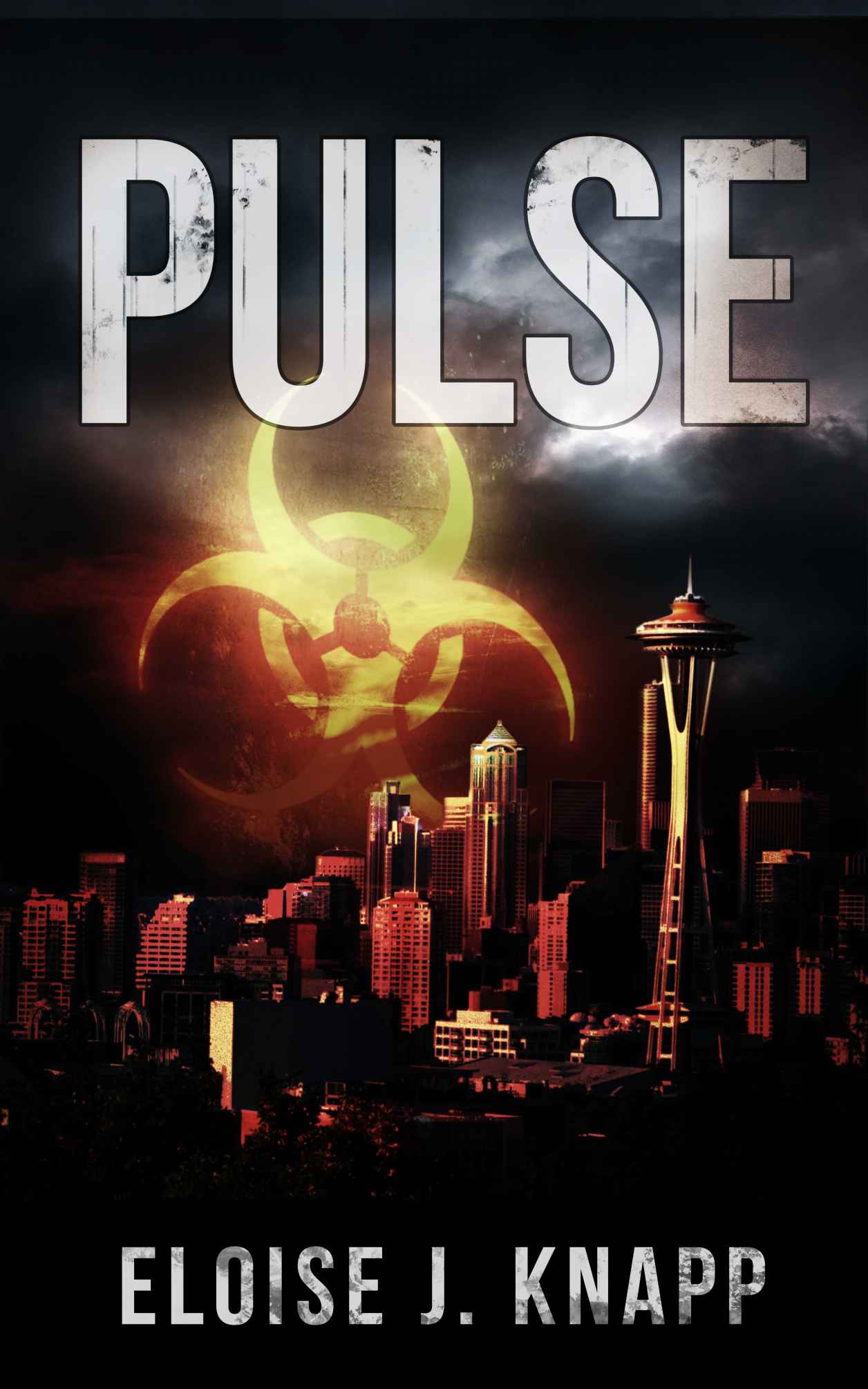 Praise for the work of Eloise J. Knapp

“As people turn into monsters, a monster learns how to be human.... The zombie apocalypse meets its match in sociopathic survivalist Cyrus V. Sinclair, the antihero of Eloise J. Knapp’s THE UNDEAD SITUATION.”
—Craig DiLouie, author of THE INFECTION
“
It’s downright cold-hearted and shockingly brutal—and virtually unputdownable.
”

“Brilliantly unusual characters are the reason that [The Undead Situation] stands out. Bluntly put…I’ve never so thoroughly enjoyed a book full of people that I can’t stand.”
—Jill McDole, Impact Online

This book is a work of fiction. People, places, events, and situations are the product of the author’s imagination. Any resemblance to actual persons, living, or dead, or historical events, is purely coincidental.

Without limiting the rights under copyright reserved above, no part of this publication may be reproduced, stored, or introduced into a retrieval system, or transmitted in any form, or by any means, without prior written permission of the copyright owner, expect in the case of brief quotations within critical articles and reviews.

For all the people who listen when I say,

“Did I tell you about my latest idea?”

Garrett Miller had been fishing the Pacific since his daddy took him and his brother on the water and said, ‘Get to work.’ They’d learned even the worst catch was still a catch, and throwing it back didn’t do no one any good. He had never considered throwing something back unless he really had to, or being completely honest at the market. Not once.

Plus, as long as you told the kids in Seattle that it was locally sourced (it was), and sustainable (he wasn’t sure what that meant) they’d pay top dollar thinking they were doing a good deed. They
were
doing something good. Garrett had five children and a wife at home to take care of. He never finished high school since fishing was what his family had always done. He felt that there weren’t any options for him, which is how he justified the occasional underhanded deal. If the market wouldn’t take them, they sold it to a dealer who shipped fish across the country.

But
on a gray, lifeless day, when the net came up and the fish were barely flopping, he got a sick feeling in his stomach that something wasn’t right. Some of them were downright dead. Others had eyeballs that were burst or bloody red. A handful of them reeked and their bellies were blown out, the guts and most of the meat gone.

Ever since the nuclear disaster in Fukushima, Garrett’s wife Pat welcomed him home with the latest news story she’d read online. Garrett indulged her the first few times, listening to her proclamation that fishing was dangerous, and that radiation was being carried in fish and the currents all the way to Washington. Once she went so far as to boycott anything from the sea in the house. He wouldn’t admit it, but much of what she said
did
scare him, so when the strange fish came up in the net, Garrett felt a dreadful sense of confirmation rather than surprise.

He didn’t say a word to his brother Mark, who
eyed the catch, his gloved hands on his hips. “Toss the dead ones.”

Relief flooded Garrett at his brother’s command. He began hauling the net up when Mark stopped him.

“No, just toss the dead ones. We’ll salvage the others, cut the heads off and sell ‘em to Ron. Trust me little bro, these fish will be half way across the country and not our problem in a few days.”

“They’re gross looking,” Garrett said. “No one would eat these.”

Mark prodded a fish with his boot, then stared Garrett down. “Pat’s been on your case about Christmas, right? We’re all strapped for cash. No sense in letting ‘em go to waste.”

Garrett didn’t like it. Times were tough, but they’d never seen fish in such bad shape before. He hesitated. If something happened, it might come back to him. Things would be a hell of a lot worse then.
What would Pat think if she knew he was sending radiated monster fish into the world?

He steeled himself against the thought. It was all conspiracy. He knew better than to let Pat’s crazy get to him. Plus,
staring into his older brother’s unforgiving eyes, he knew he’d couldn’t say no. He didn’t call the shots.

He threw the dead ones back in the water,
putting the rest on ice.

In a podunk little town in North Dakota a man named Jay Lehmann died. He had no children to his name and never married. His best friend was a bottle of the cheapest whiskey he could find. Calling him the town drunk would be giving him too much credit; really, no one knew him well enough to bestow a title.

Four days prior to Jay's death, he bought a slice of
salmon on quick sale from the town store. The store didn’t usually get fish, being so far away from water and all. Even at its best by the time the salmon arrived, it was old.

It was a real treat, but he felt like he deserved it after the bad summer.
Jay pawned a ring he found while plowing his field and made thirty bucks which meant he was celebrating. The color of the fish looked a little off, but he had a stomach of iron like his momma always said. Only gotten food poisoning twice in his life, so there was no sense in wasting a good piece of fish. He seared both sides and ate it chewy in the middle, how he liked his fish.

After that he got sick. Sicker than he'd ever been before. Yellow, thick sweat oozed from his pores and was sticky to the touch. Blood vessels popped in his eyes until there were no whites. On the third day he fell into a coma. On the fourth day he woke up.

And wanted to kill.

An agonizing pain coursed through his body, sending spasms through his arms and legs. Thoughts of every person in town who looked at him wrong flooded his mind. All he could think of was tearing their bodies apart with his teeth, hearing their screams as he took their lives away.

Jay Lehmann got to his feet, ran out the door of his one room shack, and began looking for someone to rip apart and eat alive. He went back to the very grocery store he bought the fish from and tore into shoppers with the ferocity of an animal.

Later, i
n a tiny emergency clinic in North Dakota, twenty miles from the grocery store incident with Jay Lehmann, ten patients came in with symptoms none of the small town doctors had ever seen before. The complete reddening of the eyes and foul sticky sweat, culminating in a coma…it was too much for them to handle.

They were unaware they needed to inform the CDC of multiple similar cases
with symptoms like these. They were unaware of what their breach in protocol meant for the nation. Instead, they stuck IVs in them, began running as many tests as they knew of, and prayed for the best. The sheriff insisted the town didn’t need any more bad attention, so they locked down the hospital and let no one from the media in.

Little did they know,
had they contacted the CDC, the beginning of the end would never have happened.

"Do you know what would be amazing?"

"The zombie apocalypse,” Dom said. He lowered his voice, glancing around the break room to verify he was alone. He switched the phone to his other ear. “I don’t know if I can stand another day working here. It isn’t even the customers. It’s my manager. She’s killing me.”

Chelsea laughed. "Well yeah, of course. Everyone wants the zombie apocalypse to happen. And man up, we all have bad managers. That’s life."

“Some girlfriend you are. I thought you were supposed to comfort me? Tell me I’m better than this and give me some hope.” Dom was teasing. He and Chelsea shared a lovingly sarcastic sense of humor that many of their friends didn’t get.

“Don’t be an ass, Dom.” She paused
after laughing. "I think it could happen. Zombies. It would be viral though. Nothing unexplained or paranormal or whatever."

Dom took a swig of his energy drink and checked the clock. Breaks were never long enough. "True. But realistically the government would take them out pretty quick, virus or magic."

"No way. It would get out of control too fast. We'd be screwed. Well, not me. I have a shotgun and like three weeks of food at least,” she said.

"I've seen your house. You have a week tops. I could
go two months maybe. Got the assault rifle, a shotgun, and food."

"Dominick, your break is over." Anne, his manager, stood in the break room doorframe tapping her foot. The day he found another job would be a happy day. That's where the zombie apocalypse
fantasy always came into play.

"Gotta go, break's over. Those lattes won’t make themselves."

Dom finished his shift, clocked out, and headed home. It was raining, making the weekend traffic in Seattle more of a nightmare than usual. Something about the rain made everyone driving a vehicle lose it. In the span of twenty minute he saw a truck hit a parked car in a botched parallel park and two fender benders. It was so absurd he found himself laughing.

A group of girls in short dresses
waiting under an awning of a club pointedly looked away from him, like people did to the homeless. Embarrassed, he quickened his pace.

He was damp and in a mood by the time he got back to his apartment.
Some days he could zone out and get through a day of work quickly without much thought. Others, like today, it took the life out of him. He was in need of total solitude for the rest of the day to recoup.

When he entered the apartment complex lobby he saw h
is neighbor’s sleazy boyfriend waiting for the elevator. The guy was a total jerk and tried to pick fights with anyone who looked at him. Dom veered off to the stairwell and hoofed it up four flights of steps. Better that than spend a minute in a closed space with him.

Breathless from the stairs, Dom opened the door to find
his roommate reclined on the couch, eyes glued to the TV. The house smelled rotten and vaguely of spoiled milk under the scent of pizza, which meant—despite his repeated texts to remind him—Brian hadn’t taken out the garbage. Two boxes of pizza were open on the counter. Brian liked hacking the online ordering system when a two topping special was in effect; he put two different toppings on each half of a pizza, totaling four different flavors. Dom spotted his favorite combination—pineapple and pepperoni—and felt a little less angry towards Brian.

The Crusades: The Authoritative History of the War for the Holy Land by Thomas Asbridge
The Manor by Scott Nicholson
TimeRiders 05 - Gates of Rome by Alex Scarrow
The Dislocated Man, Part One by Larry Donnell, Tim Greaton
Gin Jones - Helen Binney 01 - A Dose of Death by Gin Jones
The Rebellion of Yale Marratt by Robert Rimmer
Tonya Hurley_Ghostgirl_02 by Homecoming
The Courtyard by Marcia Willett
The Rebel of Rhada by Robert Cham Gilman
Psychic Visions 08-Now You See Her... by Dale Mayer