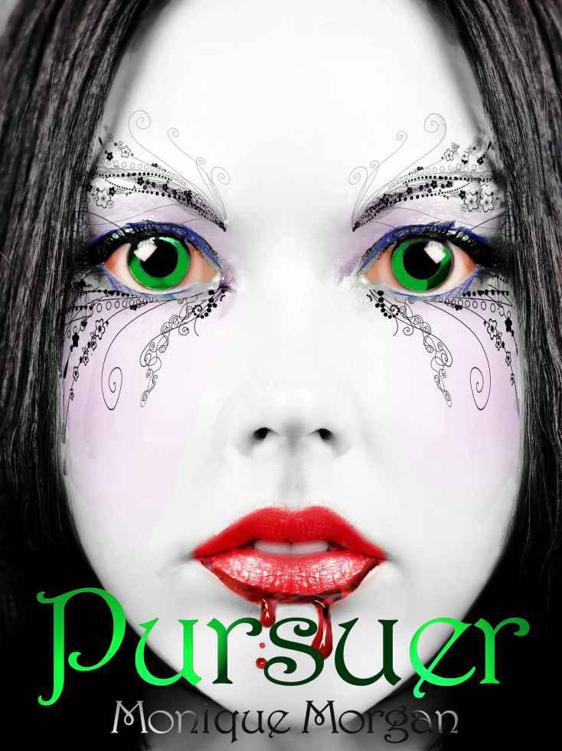 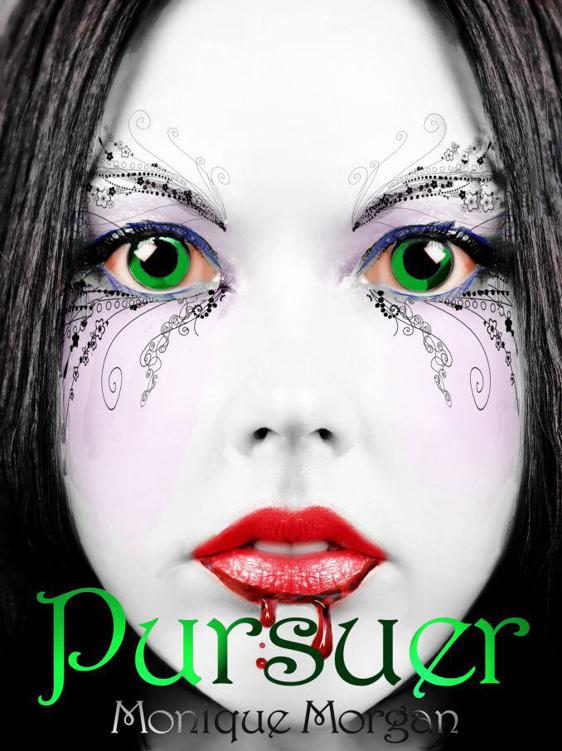 Copyright © 2012 by Monique Morgan
All rights reserved. This book or any portion thereof
may not be reproduced or used in any manner whatsoever without the express written permission of the author except for the use of brief quotations in a book review.

You may contact the author with any questions at

This book is dedicated to my beautiful children
Daniella, Alexi and Anthony
And to my loving husband
Shane

She walked the long grey hallway as she headed for class, her books heavy as she held them in her arms. She had spent too long in gym and now she was late for class, but she couldn’t help the urge in her to run. The crisp morning air flowing in and then out in a cloudy mist, the beating of her heart as her feet pounded on the dirt, the exhilaration that flowed through her very being as she experienced the closest thing to freedom that she had ever known.
She could run forever.

The door to her class stood in front of her, she reached out and pulled it open, slipping into the room.

“
You’re late Zanas. I am going to have to mark you tardy,” her stern teacher remarked.

Zanas quickly made her way to her seat, making no effort to reply. Whatever excuse she came up with would not matter, her teacher would never accept it, and for Zanas, a moment of feeling like herself was well worth the stern look of Mrs. Henderson.

Just as Mrs. Henderson began to start her lecture again, the door to the classroom opened once more. The class turned and looked as the girl sauntered in. Her long black hair hanging loose, blended in so well with her all black ensemble. Her dark onyx eyes were heavily outlined in black. On some girls, this look would be over the top, but here, the dark pallet extenuated the almost feline nature of the girl. Their teacher frowned.

“
What a surprise, its Asenya and the two Cronwell sisters are late for class again. You both are heading towards detention.” Zanas’s sister rolled her eyes as she walked up the aisle, her shapely hips swaying through a mid-drift black shirt. She sat down next to Zanas with a sigh.

Zanas examined her twin as the teacher continued droning on. Although they were twins, identical twins, they still looked very different. Her sister’s clothing usually consisted of very little and always, much to their parent’s dismay, black. In Asenya’s eyes, there was no such thing as too much black eyeliner, which always matched her long painted black nails. Everything she did, from walking down the hallway, to sitting in a desk, exuded a strong charismatic appeal. Asenya had many boyfriends, but not for very long. As Zanas watched, Asenya pursed her full lips, and Zanas thought she had never seen such a beautiful, dark girl.

Zanas, on the other hand, was more reserved. She did not bask in attention as her sister did, yet quietly walked through life, immersed in physical activity. Like her sister, she also had her hair long, but where Asenya wore it loose, Zanas had it pulled into a braid. She was always on the go, and could not stand to have it tangling. At sixteen, she had twice won in her state division for archery, and as a member of the track team, she was the fastest runner they had, her long muscular body agile and flexible. When she was younger, her mother had diligently taken her to gymnastics and ballet, and she never lost the soft walk of a dancer.

When she was nine, Zanas had begged and begged to attend the mixed martial arts school in the big city. Her mother had refused softly at first, her plain brown eyes narrowed in worry, wringing her hands like a frightened little bird. But Zanas had been determined, and as she always did, her mother gave in to her request. That had been seven years ago, and she had never lost a tournament. The sleek toned movement of a dancer, combined with a fighter, never ceased to amaze her opponents. Her mother kept a large mahogany china cabinet to hold all of Zanas’s trophies, an overwhelming collection of small metal women standing on pedestals.

The girls had been lucky to be adopted by a rich couple who were unable to conceive. They had been pampered since the day they were brought home, constantly surrounded by nannies and attendants. Their parents had sent them to an expensive private school ever since they started kindergarten. The girls blossomed well in the environment; however, they always wondered where they had originally come from, and why they had been abandoned as babies.

After class, Zanas and her sister separated into a sea of students, following different schedules. Zanas made a point to collect the next week’s assignments from each of her teachers. She would miss the entire next two weeks, attending an archery competition in Brazil.

They met on the steps of their grand school, two dark and different twins. They waited in silence, as the long black Rolls Royce pulled up. Asenya bounced into the car and sprawled herself across the back seat, and Zanas took a seat opposite of her, placing her backpack down next to her. She pulled out a book she had been assigned in English, glancing up as her sister began softly snoring. Asenya never bothered with a seat belt and she was curled up in a fetal position on the long seat. Zanas was once again struck by how feline her sister was.

It took them almost an hour to reach their house, if it could even be called a house. The sprawling castle structure had been built over three hundred years ago. It had been passed down from generation to generation, and the family owned hundreds of acres in the heavily wooded Connecticut estate. The Rolls Royce pulled up to the high black iron gate, which magically swung open, as the security guards watching through cameras opened them. Zanas always felt like she was returning home when they took this long drive up to the house. From here, the house was not visible, just a long road surrounded by green foliage. Ten minutes later, they rounded a bend, and the huge mass that was their home appeared.

Its massive bulk shadowed the car as they drove up, its large towering walls expanding upward in such way as to resemble a stone mountain, thrust forward from the earth. Ivy grew on one side of the structure giving it an earthy feel, as if it belonged in this place; a perfect fit. The car pulled up to its massive entranceway and the driver opened the door for the sisters to exit. Asenya entered first, turned immediately toward the left, and headed toward the kitchen. Zanas paid no attention; she had something else on her mind.

She hurried across the marble floor and up the delicately curving staircase, her hand trailing on the dark bannister, its smoothness caressing her skin. Zanas made her way across the long hallway that led to her wing of the house, past the centuries old paintings and portraits on the walls. All the pictures depicted an earlier point in time, renditions of ghosts that once walked the halls, but had since been long forgotten. She walked past the antique furniture that was placed in any occupiable corner. The large double doors to her room came into view and Zanas pushed them open, walking across the hardwood floor, her shoes making a soft whooshing sound. In the closet, she changed into some stretch pants and a tank top. It was fall and a little chilly, but she would be warm, nonetheless. As she made her way toward the door, Zanas caught sight of herself in the mirror.

She gave a soft chuckle and a smile played at her full round lips. She had once again, unknowingly, chosen the same colors as her sister, all black. The difference was where Asenya’s black was expressed in a feline way; hers was exuded in way that resembled a huntress. She needed no makeup to enhance the delicately beautiful lines of her face. Tossing her long black braid over her shoulder, she stepped into her boots.

Within five minutes, Zanas made her way through the house and out the back doors. The immediate grounds were neat and tamed. Beautiful ornamental trees adorned the perfectly manicured lawn, and small flowering bushes were been planted in an orderly manner. However, just past these methodically placed examples of nature, was its true portrait. A line of green trees formed the perimeter, a deep expanse that gave no hint as to what lay within its leafy enclosure. Zanas jogged to the entrance of the trees and began to race down the paths she had cut into the earth with her very own feet.

She ran through the forest with an excited abandonment. Zanas had never been able to express in words how she was able to move as she did. She leapt and turned, bending with the earth, feeling its curves and bumps, and matching her feet to them. She had never fallen or tripped. When she was in the trees, it was as though she was connected to the green living creation. A soft snow had begun to fall, so thin and small that it looked like a shower of sparkling diamonds, glittering peacefully to the ground.

A movement made her halt her thundering pace; two ice blue eyes stared back at her through the trees. A wolf. She had never seen one before, and it was
extremely
close. They stared at each other, huntress to huntress, blue eyes meeting black. She felt a small tingling in her inner core that spread like a bolt of lightning, the wolf gave one final piercing look before trotting off. Zanas heard a faint howling in the distance. She had goose bumps across her flesh.

Her sister was in her room when Zanas returned, glancing up from her bed as she walked past her door. Zanas entered Asenya’s room and sat at the edge of her bed, while Asenya absently turned through the pages of a magazine.