Pursuit Of The Mountain Man (32 page)

BOOK: Pursuit Of The Mountain Man
10.51Mb size Format: txt, pdf, ePub
Read Book Download Book
ads
When Smoke finally released the woman, her screaming had been reduced to low whimpering moans of pain. He knew he had blistered her butt; he also knew it would be a long, painful ride for Miss Marlene, sitting a saddle out of the mountains.
“You brute!” Maria hissed at him.
Smoke smiled and jerked her across his knee. He gave her fanny the same workout he had given Marlene’s derriere, reducing the woman’s squallings to tiny whimperings for mercy. When he finished, he dumped her on the ground and dangled the belt for Andrea to see.
“You have anything to say to me?”
She shook her head and kept her mouth shut.
Gunter was moaning and crawled around on his hands and knees, his mouth a bloody mess. He got to his feet, leaning against the rock for support. He didn’t need it.
“Oh, no,” Gunter said as Smoke approached him.
“Oh, yeah,” Smoke said, and popped him again. Gunter kissed the ground.
The Army patrol, which had arrived at the scene just seconds after Smoke and Frederick squared off, and whose members had thoroughly enjoyed every moment of the thrashing and spankings, rode into the clearing.
“Captain Williams, sir,” the officer said, saluting Smoke. “We’ve come to escort these people to the nearest train depot and to see that they leave this country.”
“You can sure have them,” Smoke said. “No way they can be held accountable?”
“I don’t think so, Mister Jensen. Their families have a lot of political influence in this country. Statesmen and diplomats and that sort of thing.”
Smoke told the Captain about Hans and where he was buried. “I’ll write Prince Hans Brodermann’s parents personally. He really wasn’t a bad sort of fellow.”
“Why did he get mixed up with this bunch?”
Smoke looked over at the now not quite so haughty Marlene. “Well, I reckon, Captain, that the man had a good eye for horses and mighty poor judgement when it came to picking friends.”
Epilogue
Smoke rode into Sheridan and sent a wire to Sally, assuring her that he was all right. He told her he was going to ride back to the Sugarloaf, sit on their front porch, play with his dogs, and wait for her to join him. He closed with: I’ll stay here in town and wait for your reply.
The next morning, over breakfast, a boy brought him the reply from Sally. It read: Taking next train. Will be there long before you. I’ll play with the dogs. You can play with me. Love Sally.
THE MOUNTAIN MAN SERIES BY WILLIAM W. JOHNSTONE 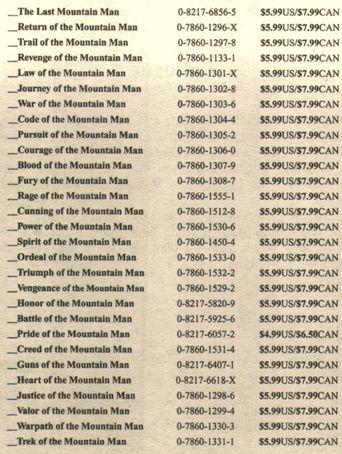 Available Wherever Books Are Sold!
Visit our website at
www.kensingtonbooks.com

Evil Harvest by Anthony Izzo
The Hole in the Wall by Lisa Rowe Fraustino
The Underdogs by Sara Hammel
Caring Is Creepy by David Zimmerman
Harry Truman by Margaret Truman
She's Gotta Have It: A Hood Love Story by Shvonne Latrice
Billy the Kid by Theodore Taylor
Emancipated by Reyes,M. G.
Visiting Mrs. Nabokov: And Other Excursions by Martin Amis
Summer Heat by Harper Bliss