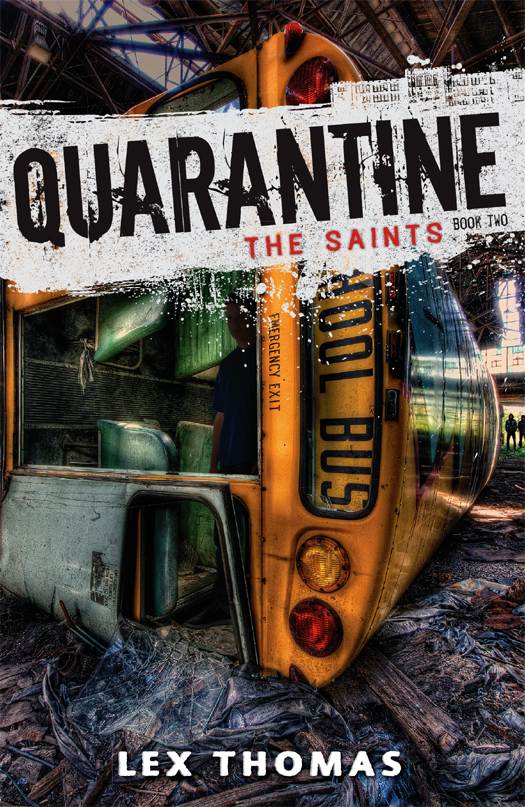 EGMONT
We bring stories to life

All rights reserved. No part of this publication may be reproduced, stored in a retrieval system, or transmitted, in any form or by any means, electronic, mechanical, photocopying, or otherwise, without the prior permission of the publisher and copyright owner.

To our family and friends. For still hanging out with us after
we dropped off the face of the Earth.

THE OUTSIDE. IT WAS A PLACE WHERE THINGS
were alive, where forests grew, where your friends weren’t trying to kill you, and the air didn’t taste like dust. The door to the outside was now open.

Hissing torches filled the dark hallway with red. Will held Lucy’s hand. They ran like mad down the hall, trailing the rest of the Loners. They’d gone back to get their gang when those gun-toting kids from the outside had opened the doors. Will watched the Loners ahead of him dash around the corner and pour into the front foyer. He heard happy screams.

Will and Lucy burst into the foyer. Bright light streamed in from the mysterious white room beyond the steel graduation doors. The rest of the Loners were already crowded at the doorway, fighting each other to get through first. Half of them were in tears. Sunburned kids from the outside
stood at the edges of the foyer, leaning on their rifles and waving the Loners forward.

Will and Lucy charged toward the light. Will wanted inside that room so badly, but the rest of the Loners were ahead of him. He and Lucy pushed against the backs of the Loner mob. The approaching thunder of running feet filled the halls behind him. The other gangs were coming. All of them.

“Faster!” Will shouted at the Loners in front of him, who were still passing through the graduation doors ahead.

Shrieks of joy echoed through the foyer as kids from every gang flooded into the foyer from hallways, and came charging down the central staircase. Clamoring students slammed into the backs of Will and Lucy, pushing them through the graduation doors and knocking them to the floor of the blinding white room beyond. If they hadn’t scurried to the side right away, they would have been trampled.

The white room. It was uncharted territory. The only McKinley kids that had ever made it this far were graduates. Will squinted, trying to make his eyes adjust to the brilliant light that overexposed the room. This area must have been on its own generator. He realized that the entire, wide ceiling was one large panel of light, except in the center, where there was a giant mechanical contraption. It had eight metal arms that each held a hose with a spray nozzle at its end. The device’s arms were drawn in on itself, like a dead spider. The floor and walls were all white ceramic tile except for an
eight-by-eight-foot metal door to Will’s left and an observation window by the ceiling.

Lucy’s hands grasped Will’s arm and lifted him off the floor.

Will and Lucy flowed with the crowd toward a door at the other end of the room. They fell in beside Belinda and Leonard, but the crowd around them had mostly become a patchwork of different-colored heads. They left the white room behind and entered a long corridor. They teetered at top speed, and clung to each other for balance. On either side of them, down the length of the hall, were holding cells, each with a thick, clear, plastic door. Hanging ceiling lamps revealed that each cell contained a cot, a sink, a toilet, and a desk bolted to the wall. Stacks of magazines lay on the floor of some cells, a deck of cards was scattered in another, and in the last cell, Will noticed that the walls were graffitied with permanent marker doodles. One was a happy-face sun looking over a graveyard.

The crowd bottlenecked again at the next doorway. People behind Will and Lucy started pushing harder, screaming to move faster. They squeezed into the next room. The doors in and out were airtight. Metal closets lined the walls. The little room was packed beyond capacity. A bunch of Skaters behind Will and Lucy pressed against the crowd with solid, continuous force. Will felt merged with the bodies around him, like meat through a sausage grinder. Finally, they were spit out
through the second door. They stumbled into a wide room with a hall to the left and to the right. Outsiders blocked those passages and waved everyone forward.

This new room was lined with desks that must have once held computers and machinery, but now only tangles of wire remained. Desk chairs were strewn over the room. An American flag on a pole was tipping into a dead, potted palm. The place had been abandoned in a hurry.

Will had already seen it. In the center of the wide far wall, beyond the writhing, multiheaded silhouette of the dashing crowd, sunlight streamed in from open double doors. He almost cried.

The crowd surged. Loners ahead were making it outside, into the sunlight. Kids from other gangs too. Will saw the outside in glimpses. Snowcaps on the distant hills. Clumps of luscious green grass sprouting up across the front lawn. Swaying trees. A pigeon flying in a quartz-colored sky.

“Yes, yes, yes,” Lucy said on repeat, as they raced toward the doors.

One outsider stood at the exit, holding one of the doors open, as kids wrestled their way past him, fighting each other to get out first. The kid was tall, he had long white hair, and one of his eyes was so bloodshot that the white of his eye was a deep red.

“Keep going, keep going!” the red-eyed boy said to Will as he reached the doors.

Lucy tugged Will back. He looked back at her in a panic. What was she doing? They were only a few feet from freedom. Her face was taut with terror. Will heard the blast of a car horn.

Will turned to see kids in front of him dive out the doors. A blazing yellow school bus was barreling toward Will, seconds from smashing into the building. The outsider kid hadn’t seen it yet; he was still shouting at the crowd inside.

Will shoved Lucy to the side, away from the doors. He grabbed the outsider kid, and yanked him out of the way.

Will and the outsider hit the floor just as the bus plunged through the entrance. The impact jolted the entire wide room with a clap of metal against concrete. Chunks of ceiling dropped, nearly crushing them. Dust clouded the room. All the lights in the facility flickered and died.

For a moment everything was still and silent.

Will breathed in dry air. He was alive. The outsider pushed himself up and held his head, dazed. Coughs mingled with the creak of metal and the tick of a hot engine. People slowly began to rise around the room. The entire structure had collapsed around the crushed face of the bus, covering the doors and windshield with gigantic slabs of concrete. All that could be seen was the bus’s front grille and bumper; not a speck of
the outdoors was visible anymore. One unbroken headlight cut through the thick dust, and stared deep into the new darkness.

“No,” Will heard himself say.

He was staring over at Lucy. She was unconscious. He scurried to her and took her head in his hands. He brushed her soft tangle of white hair away from her face. He touched her pale cheek; it was cool.

“Lucy. Wake up,” Will said. All he wanted was for her big, beautiful eyes to open, some sign of life, but her body remained limp. He could feel his voice getting weaker with emotion. “Please,” he said.

All around, kids struggled to their feet. They pulled at the rubble, but the heaviest slabs stayed put, locked in place around the bus. There was no budging any of it.

The wailing began. Kids cried, and held each other. They beat at the bus with their fists. Dust still swirled in the headlight’s path.

Will held Lucy’s head gently in his hands.

Lucy coughed. Her eyes fluttered open. She looked up at him, confused.

Will couldn’t bear to look her in the eye.

She was still on the floor. She stared at the mangled grille of the bus. It was one with the building now. Kids had given up trying to move the stubborn, concrete slabs that covered its front.

She didn’t know what to say. To say something would be to acknowledge that this was actually happening, that she’d seen nearly her entire gang escape McKinley before she could, and that the only way out of the school had been destroyed.

Everybody else was furious. McKinley kids had the outsiders backed up against the bus. They were screaming at them, asking desperate questions, with so many shouting at once that all Lucy could hear was one long, unintelligible blast of anger and confusion. The outsiders looked frightened. They
had their rifles and pistols drawn and pointed at the McKinley kids.

The boy with the red eye stepped out in front of the other outsiders.

“Everyone, shut up!” the red-eyed boy said.

His voice carried, and the screaming subsided.

“We aren’t the bad guys,” the red-eyed boy said to the crowd. “We didn’t drive this fuckin’ bus in here.”

Will squeezed Lucy’s hand. She hadn’t realized he was holding it, but of course he was. In the last two weeks, as the food had run out, as they began to starve, as death became a certainty for them, Will had always been there, holding her hand.

“Can you walk?” Will asked Lucy. He was looking at the outsiders, like he didn’t want to miss a word of what they had to say. Lucy didn’t either. She nodded.

Will helped her up, and they shuffled over to the teeming crowd around the outsiders. The room was hot with their breath. Anguished faces and torches extended back through the room, and down the hall beyond.