Read Quest for the Sun Online

Quest for the Sun 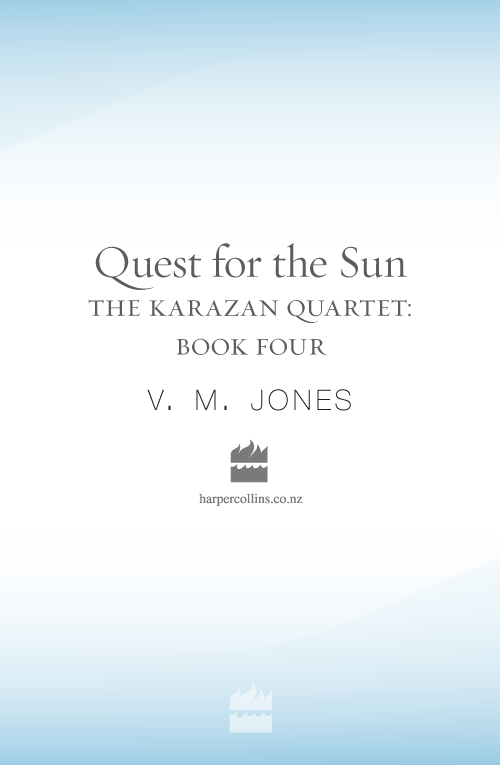 To Kyle Hafner and JB Warsop,
two wonderful boys who made the world
shine brighter.

An army of five

The puzzle of the ring

The Cauldron of Zeel

Bird in a cage

The magic of destruction

What the moonlight revealed

A spy in the night

Echoes in the mist

Out of the frying pan

A call of nature

The brotherhood of the arena

The Lost Tribe of Limbo

A gift from Blade

The Circus of Beasts

The edge of the world

Thunder in the dawn

The voices of men

The Realms of the Undead

The King of Darkness

Take it â¦ use it

Book One: The adventure begins â¦

âIntensely readable and written with Jones' trademark clarity, it's a ripper â¦'
North and South

âLeaves the reader anxious for more â¦'
The Press

Prince of the Wind

Quest for the Sun

Twin moons hang low over the tree-tops, their light a burnished barrier between the shadows of the forest and the sleeping city walls. High above the forest floor the old owl roosts on his favourite perch. The downy feathers of his breast stir in the night air. He has hunted well, but something keeps him here, his talons locked on the rough bark, his gaze fixed on the spill of moonlight below. There is a movement in the wall. Quicker than thought the owl's head turns, his eyes snapping into focus. His grip tightens.

A dark outline traces itself on the stone. A rectangular section of wall shifts and swings outwards. The owl stares, unblinking. Two plumes of mist breathe themselves at man-height into the brittle air. For an instant they mingle in murmured words, whisper-soft; then part.

The owl's night vision is keener than any living creature's, but even he can see nothing other than two rhythmic gusts of vapour, one moving soundlessly eastwards, toward the sea, the other into the clutching shadows of the forest.

A sense separate from sight or hearing tells the owl he is in no danger: the man's attention is focused elsewhere. The heart-shaped face tilts downwards, then swivels to follow as the man passes beneath the tree. The owl's brain processes the changing frequency of sound waves as the crunch of frost gives way to the rustle of leaves â¦ and the man begins to run.

The owl turns to face forward again. Now the first groping tentacles of shadow are touching the city walls; the moons will soon be gone and the sun will rise â¦

A fleeting after-image of the sounds he has seen echoes in the owl's mind. âWhooo,' he hoots softly. âWhooooo?' He ruffles his feathers, spreads his wings and floats silently away into the darkness.

To the east the first light of the new morning streaks the sky with violet, the sea with gold. The bulk of the city walls and the pinnacles of the palace take shape against the lightening horizon.

In the heart of the palace a private garden rings with the clamour of waking birds. Abruptly their song is silenced. A purple-cloaked figure is hurrying towards the royal apartments at a hitching shuffle.

The soldier stationed at the entrance snaps to attention. He might not exist. Eagerly the misshapen figure hobbles up the stairway to the bedchamber. At the top he pauses, cracks his knuckles, tilts his head to listen.

The landing is lit by burning brands in brackets at either side of the arched doorway. A rug of royal scarlet rests on the floor; beside the door a pedestal holds a delicately painted porcelain
urn. Grey light drifts up from below as morning steals softly through the narrow windows that light the stairwell.

Two soldiers guard the door, swords crossed. The sorcerer approaches. The torches flicker as the swirl of his cloak disturbs the still air; reflections of flame spill scarlet stains down the razor edges of the swords. Dark eyes burn from a nest of hair. âWell? Has it come â the cry of the newborn?'

Before the guards can reply, there is the sound of booted feet on the stairs. They move with a heavy, deliberate tread. âStand aside. The King approaches. The hour is come.'

To the west, in the depths of the forest, night is dissolving into the gossamer greyness of dawn. The man runs uphill. His lungs are on fire; his breath comes in harsh gasps. His shoulders burn with the weight he cradles tenderly.

He stops to check that the sound of the stream is still within hearing, as he was told he must. He cannot see his feet on the forest floor; cannot see the familiar face nestled within the soft fur. His fingers feel for the silken cascade of hair, the smoothness of the cheek â¦ but it is cold as marble. He can see nothing; hear nothing. Fear twists his heart. He bends closer. â
Zaronel?
' he whispers. â
Ronel
â¦'

A tiny mewling comes from deep within the mantle, and he feels an answering sigh, the caress of a breath on his skin. His soul lifts. He runs on, the air lightening around him with every stride. At last the trees begin to thin. Ahead he sees pale sky and looming rock; a standing stone, tall as a man.

This is the place
.

Gently he lowers his burden to the ground. A tangle of young ferns cushions and conceals it, but as he withdraws his hand he sees her face at last. It is bloodless and still. He steels himself for what he knows he must do. His hand reaches out; by touch he finds the tiny bundle.

âNo â¦' A low cry of anguish, as if it is her heart he is taking.

âYes. Strength and courage, Zaronel of Karazan. I will return.'

The red rim of the rising sun bleeds over the horizon. A shadow grows on the rose-washed surface of the cliff, faint at first, stretching tall as the sky. The sun drags itself up from the sea; the shadow strengthens and begins to shrink.

Now there is another shadow on the cliff face: the ghost of a man. The shadow-figure blends into the shadow of the standing stone, merges with it, and is gone.

The dead of night. A white gate creaks open of its own accord. Soft footfalls crunch on gravel â¦ then move soundlessly over grass. Up the red steps â¦
one, two, three
â¦ into the deep shadows of the porch.

There is the soft
tap
of something solid being set down with infinite care; a scrape as it is pushed into the furthest corner, out of the wind. A pause as two objects are snuggled into the lacy folds of a shawl. The outline of a box appears and disappears as clumsy, gentle hands tuck and rearrange, resting one last time on the swaddled bundle in a silent blessing.

In the dark stillness of the porch, snug as a caterpillar in a cocoon, a tufty-haired baby blinks and yawns. He chews sleepily on his fist, finds his thumb and starts to suck.

It is a long time till dawn.