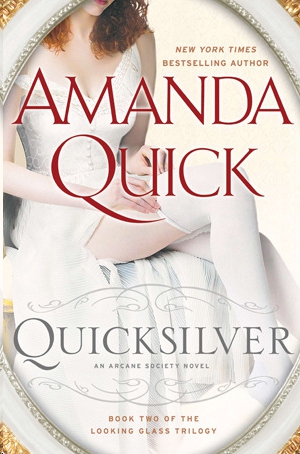 For Frank. You are my hero.
ONE
T
he visions of blood and death blazed violently in the mirrors. The terrible scenes, lit by gaslight, reflected endlessly into a dark infinity.
Virginia lay very still for a moment, her heart pounding while she tried to make sense of the nightmare in which she had awakened. Myriad reflections of a woman lying on a tumbled, bloodstained bed surrounded her. The woman was dressed in only a thin linen chemise and white stockings. Her hair cascaded around her shoulders in tangled waves. She looked as though she had recently engaged in a passionate encounter. But her dazed eyes were wide with shock and horror, not fading desire.
It took Virginia a few seconds to realize that the woman in the mirrors was herself. She was not alone in the bed. There was a man beside her. The front of his unfastened shirt was soaked in blood. His head was turned away, but she could see enough of his handsome face to recognize him. Lord Hollister.
She sat up slowly, unconsciously letting go of some unseen object that she had been gripping in one hand. Part of her insisted that she was living through a dreadful dream, but her other senses warned her that she was awake. It took everything she had to touch the side of the dead man’s throat. There was no pulse. She had not expected to find one. The chill of death enveloped Hollister.
A fresh surge of panic flared through her. Tiny icicles lanced the nape of her neck and the palms of her hands. She scrambled frantically out of the bed. When she looked down she noticed that a portion of her chemise was stained crimson. She raised her eyes and saw the knife for the first time. It was half hidden by the rumpled sheets. The blade was covered in blood. The hilt lay very close to where her hand had been a moment earlier.
At the edge of her vision she saw disturbing shadows shift deep within the mirrors. Hurriedly she shuttered her psychical senses. She could not deal with a reading just now. Her intuition was flaring wildly. She had to get out of the mirrored room.
She turned quickly, searching for the new bronze-and-black gown that she had worn to the Hollister mansion that evening. She saw the dress and her petticoats. The garments were crumpled carelessly in the corner, as if they had been hastily discarded in the throes of passion. The toes of her high-button walking boots were just visible beneath the folds of the cloak. For some incomprehensible reason, the thought that Hollister had partially undressed her before she had sunk a knife in his chest was more unnerving than awakening next to the body.
Dear heaven, how could one kill a man but have no memory of the violence?
she wondered.
Dark energy seethed again in the mirrors. Fear and the need to escape were making it hard for her to control her senses. Once again she managed to suppress her talent. The shadows receded deeper into the looking glasses. She knew she could not banish them entirely. It was no doubt still night outside. Glasslight energy trapped in mirrors was always strongest after dark. There were scenes lurking in the looking glasses that surrounded her that she needed to confront, but she could not read the afterimages now. She had to get out of the room.
She looked around and realized that there was no obvious door. The walls of the small chamber appeared to be entirely covered in mirrors. But that was not possible, she thought. The air in the room was fresh. The gas lamp burned steadily. There had to be some concealed means of ventilation, and somewhere there was a door. And where there was a door, there would be a draft over the threshold.
Forcing herself to focus on one thing at a time, she crossed the chamber and picked up her gown. It took an enormous amount of effort to fasten the petticoats and pull the dress up around herself because she was shivering so violently.
She was struggling with the bodice, trying to get the front hooked, when she heard the soft sigh of concealed hinges. Another wave of panic rattled her nerves. She looked up quickly. In the mirrored wall in front of her she watched a glass panel open behind her.
A man moved into the room, riding an invisible wave of dark power. She recognized him at once even though they had met on only one occasion. But then, she would know him anywhere. A woman did not forget a man whose dark, shadowed eyes held the promise of heaven or hell. For an instant she could not move. She froze, the front of the gown clutched to her breasts.
“Mr. Sweetwater,” she whispered.
He gave her a swift, head-to-toe assessment. His hard, implacable face was sculpted in light and shadow by the glary light of the lamp. His eyes narrowed faintly. In another man, the expression might have indicated concern. But this was Owen Sweetwater. She was certain that he did not possess anything resembling normal human emotions.
There were only two possible explanations for his presence in the death chamber tonight. He was there to kill her or to save her. With Sweetwater there would be no middle ground.
“Are you injured, Miss Dean?” he asked, as if merely inquiring after her health.
ADS
15.4Mb size Format: txt, pdf, ePub