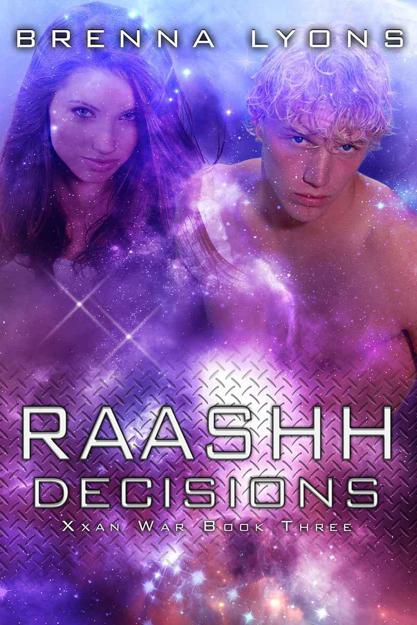 Section One The Founding Raashh: Elder

Will of the Stone

We Shall Live Again

May the Best Man Win

Raised To Be His Own

The Color of Love

The Last of Fion’s Daughters

“Do you understand what you’re getting yourself into?” Stephen Rayn asked.

Marie smiled at him. “I’ve read all the files, Doctor. I’ve gone over the psychological and medical information with your staff in great detail. I’ve met with all the members of Daahn’s nest. I fully understand that I’m agreeing to bind with Raashh for life.”

The second in command of our new Xxanian allies.
She’d always had a thing for powerful men, and he was sure to be more powerful than any unmated or unmarried man she’d ever met.

“And this doesn’t bother you?” Captain MacNair inquired, one brow raised in what she would assume was disbelief.

“Did it bother Emma?” she countered.

The military liaison winced. “Emma was illegally infused with Daahn’s
Zhigaaal
and was launched into a mating frenzy for him. Raashh is willing to allow you to be similarly infused before he approaches you, if you would be more comfortable with it.”

“I don’t think so. I would much rather meet Raashh with a clear head and let him know I came to him willingly, as one of his own females would have.”

The two men exchanged looks that said she didn’t know what she was in for.

“If there’s nothing else you need to tell me, gentlemen…” She hinted that they should be on their way to Raashh’s nest.

Rayn cleared his throat. “You may want to reconsider, Ms. Kade. At least let us infuse you first. Raashh is—”

“Emma compares him to a cargo van, Doctor. I know he’s much larger than Daahn is. I know Daahn and Emma are concerned that no human female would choose to bind herself to Raashh. I am happy to say they are incorrect. I fully intend to bind to Raashh.”
Today, if they stop wasting time.

In fact, she was counting on it. What could be more Dominant than a warrior race with clearly defined Dominant and Subdominant classes? Especially a leader of their kind?

They shared another long look. At last, Rayn spoke. “Very well. Let’s get your bio-tracker on and take you to meet Raashh.”

Raashh paced the length of the center nest, his emotions in a riot. They’d done it. Rayn and Mac had found a human female willing to bind to him.

She may not once she meets me.
He knew the chances of finding a female comfortable with his size was unlikely.
She will most likely take one look at me and change her mind. She’ll beg to be given to one of the others. One of the smaller males.

Unless they’ve infused her.
His primary ached at the thought of her arriving, already anointed with his
Zhigaaal
and in a frenzy for him as Emma had been for Daahn. He’d agreed to it, praying to the
Seir-God
that the human female would not come to her senses until he’d bound her to him and proven himself a worthy male to her unique sensibilities.

Everything he’d done—from building this lush nest to stocking in human delicacies—had been designed to seduce her senses and impress her nesting instincts.
Please,
Seir-God
, let it be enough.
He’d been without a female for six Earth years. Raashh wasn’t sure how much longer he could last.

A tone let him know Mac’s shuttle was inside the blast shields. It would only take him a few moments to unload Rayn and the female.

I should go to meet her.

No. I should meet her here, so she sees me after she sees what I offer.

Which would be better? It was enough to drive a male mad.

The sounds of them descending from the shuttle pad had his cock hard and ready. Raashh listened closely, picking out the feminine tones mixed in with those of Rayn and Mac.

It didn’t sound as if she had been infused. Raashh bit back a dozen harsh curses at that. If she hadn’t been infused, she was sure to refuse him.

At least I will meet her. Perhaps she will look kindly on what I offer, if not on me personally.

They entered the center nest, the two men walking side-by-side in front of the female, blocking his view of her. It was a weak mirror of the way a female’s
seir
and brothers might bring her to a male to sate her quickening. Still, Raashh knew the real reason for this. It was a warning to him to rein in his instincts. She was a human female and too fragile to handle him at his most sexual and Dominant.

They should have infused her.

Mac and Rayn came to a halt just outside Raashh’s reach. Each man took a step apart, revealing the female to him.

Mac didn’t hesitate. His Xxan was smooth and near-perfect, despite his human birth. “May I present Marie Kade, Raashh.”

Raashh fought for the ability to respond. The yellow-haired female barely reached Mac’s broad shoulders, and the springs of curl cascading around her face and shoulders reminded him of old vids he’d seen of child actors from a bygone age. “This must be what
humans
call a
joke
, Mac. She cannot possibly be my mate.”

The female answered before Mac had a chance to…and in even smoother Xxan than Daahn’s brother warrior could manage. “Am I displeasing to you, Raashh? You haven’t even scented me yet.”

“It is not a matter of pleasure.” As humans went, she was a delicious little morsel.
And therein lies the problem.
“You are much smaller than Daahn’s mate is. You are too small to handle a male of my size.” Though her facial structure appeared adult and her breasts and hips well rounded, her stature was that of a prepubescent human in height and width. Raashh was certain he could cover three-quarters the span of her narrow waist with one hand and talons combined and span her hips with both.

He’d heard the sounds Daahn’s mate made when Daahn lay with her. If those pitiful sounds were any indication, Emma could hardly take Daahn’s length and girth. Raashh might well split this poor, tiny female in two in the attempt. Human or not, harming a female went against a Xxanian male’s ethics and instincts.

Her smile was disarming. It warned that the discussion was not nearly over as he’d believed it would be after his protest.

She padded to him on bare feet, her
S’suuhhea
swishing around her body. “I don’t believe you are correct, Raashh.” She went up on her tiptoes, and her lips pressed to the musk well high on his chest. Her tongue prodded at it, bringing his primary cock up again and making his musk flow.

The Arrangement by Smith-Wilson, Simon
Under His Control (For His Pleasure, Book 18) by Favor, Kelly
Weekends in Carolina by Jennifer Lohmann
Southern Gothic by Stuart Jaffe
Cloudsplitter by Russell Banks
The Monet Murders by Terry Mort
Sarah's Christmas Miracle by Mary Ellis
The Architecture of Fear by Kathryn Cramer, Peter D. Pautz (Eds.)
Tempting Taine by Kate Silver
Carol's Mate by Zena Wynn