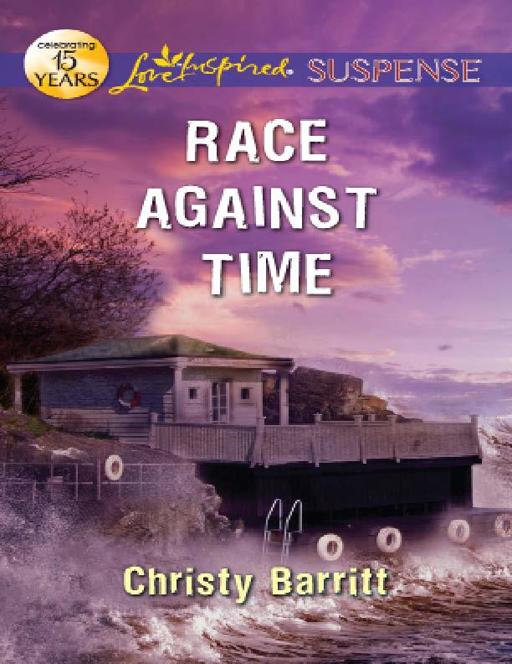 CAUGHT IN A KILLER’S CROSSHAIRS

Were it not for her cop neighbor, widowed mother Madison Jacobs would be dead. Thankfully, Detective Brody Philips interrupts an attempt on her life in the nick of time. But the would-be killer hasn’t given up, and each tick of the clock brings the madman closer to finishing what he started. Brady vows to catch the serial killer plaguing the sleepy Virginia town…especially when he realizes the danger has followed him from the big city. With everyone around him at risk, it’ll take everything Brody’s got to do his duty and keep Madison and her son safe.

“I’m going to keep an eye on you, Madison. Make sure you stay safe,” Brody said. “It’s going to be okay.”

“I wish I felt so certain.” What about Lincoln? What if the man who attacked her came back and tried to harm her son? She couldn’t bear the thought of it. Perhaps she should simply take Lincoln and go somewhere, anywhere.

“We’ll catch him, Madison.” Brody’s voice sounded confident, reassuring. It was as if he could read her mind.

Just then, they pulled up to her house.

With each step she took toward her back door, nausea rumbled in her gut. Could she face this nightmare again? She swallowed as they stepped inside, trying to stay strong. Brody led her to the foyer.

“I’ve got you,” he said, a reassuring hand on her arm.

loves stories and has been writing them for as long as she can remember. She gets her best ideas when she’s supposed to be paying attention to something else—like in a workshop or while driving down the road.

The second book in her Squeaky Clean Mystery series,
Suspicious Minds,
won the inspiration category of the 2009 Daphne du Maurier Award for Excellence in Suspense and Mystery. She’s also the co-author of
Changed: True Stories of Finding God in Christian Music.

When she’s not working on books, Christy writes articles for various publications. She’s also a weekly feature writer for the
Virginian-Pilot
newspaper, the worship leader at her church and a frequent speaker at various writers groups, women’s luncheons and church events.

She’s married to Scott, a teacher and funny man extraordinaire. They have two sons, two dogs and a houseplant named Martha.

To learn more about her, visit her website, www.christybarritt.com.

My God is my rock, in whom I take refuge,
my shield and the horn of my salvation.
He is my stronghold, my refuge and my savior—from violent men You save me.

This book is dedicated to my mom, Louise Mohorn, a beautiful soul inside and out,
and someone I aspire to be like. I love you!

A
s soon as Madison Jacobs stepped into her house, the sound of ticking crept from an unknown crevice and reverberated in her ears. She froze at the front door, car keys still in hand, and listened. She usually came home to the solitude of a quiet house.

So what in the world was that noise?

She’d only been gone twenty minutes—long enough to drop her son off at preschool and return home. Each tick tightened her nerves, winding them with more tension than a spring.

Lincoln must have left the timer going on one of his toys, she realized. Didn’t that windup dragon make a similar sound? Yes, it did.

Madison let out an airy laugh, shook her head and closed the door, shutting out the bright rays of sunshine from outside. Of course, one of her son’s toys was to blame. What else did she think it was? A bomb? She chastised herself again for her out-of-control imagination.

Out of habit she clicked the lock on the front door into place. Being a single mom for the past three years, she tried to err on the side of caution. After depositing her purse and keys on the marble-topped table in the foyer, she glanced at her watch and saw she only had one hour before she had to meet with her next client. She had to get showered and changed out of her yoga pants and T-shirt—and fast.

As she started down the hallway toward the bedroom in her ranch house, the ticking intensified. She paused at the bathroom door. Was that where the sound came from? Reaching inside the bathroom, she flipped on the lights. Her blue-and-yellow lighthouse-themed room came into view. On the bathroom counter between the faucet and the soap dispenser sat her son’s old-fashioned egg timer. Had Lincoln actually taken her advice to brush his teeth for two minutes this morning? Perhaps he’d accidentally set the clock for longer.

She picked the plastic device up, noting it was set to chime in twenty minutes, and twisted the handle until the bells jangled. Her nerves seemed to stretch tighter at the sound.

But if her son had set the timer before they’d left this morning, why hadn’t she heard anything? She remembered their rushed departure. The TV had been on, Lincoln had been singing his favorite preschool song, and she had been frantically trying to urge him out the door.

Her schedule was tight today and she couldn’t afford to even start it a minute late, knowing if she did her tardiness would have a domino effect and put her behind on all of her appointments.

She tossed the timer into a drawer that overflowed with hairbrushes and toy boats, and then hurried across the hall to the spare bedroom-turned-office. Finding her calendar, she checked her schedule one more time and reviewed her assignments for the day. Just seeing the jam-packed list made her feel weary. But she had to squeeze in as much work as possible. Making ends meet as a single parent was becoming harder and harder.

She closed the calendar and, wasting no more time, went into the master bathroom. After showering she towel dried her shoulder-length honey-blond hair and threw on some khakis and a button-up white top. Five minutes later she’d applied make up, grabbed her camera from her office and started down the hall. She had fifteen minutes to get to her appointment. Time would be tight, but she could do it.

She froze midway down the hall and placed a hand on her hip.

What was that sound?

She shook her head. It couldn’t be…

The timer? She’d turned it off. Thrown it in the drawer.

Was she hearing things? The sound was subtle, subdued. Maybe the device had started again in the drawer? The thing was cheap, often turning off in the middle of one of Lincoln’s time-out sessions. Had it turned on by itself now?

She sighed and stepped back into the hallway bathroom. Flipping on the light, she yanked the drawer open and found the timer exactly where she’d thrown it. She picked it up and shook her head. Cheap thing. It had been free, sent as a part of an advertising campaign for some new company in town. What was that slogan? Don’t Let Time Run Out on Our Special? Clever.

Before she could twist the plastic white timer off, the bell jangled.

Madison jumped, dropping her camera bag onto the tiled bathroom floor. Papers detailing today’s work scattered all over the room. Hand over her heart, she laughed at herself. Silly woman. Jumping at nothing.

She dropped the timer back into the drawer, shaking her head. Why was she so skittish? And over something so silly?

She caught a glance of herself in the mirror over the sink, noting the circles under her eyes. She’d been working too much lately, worried too much about finances. She leaned toward her reflection and wiped a streak of mascara under her eye. As she turned to leave, something in the mirror caught her eye.

She glanced at the reflection of the shower curtain behind her.

A man stood there, a knife in his hand. Before she could scream, he grabbed her.

Brody Philips always considered sweat a good measure of hard work. If that was the case, then his jog this morning should earn him a vacation. He continued on his ten-mile run, nearly finished now. The hot and muggy day couldn’t even be eased by the gentle breeze that floated from the Chesapeake Bay.

The part of the Bay he lived by wasn’t the sandy beach area. Instead, marsh grasses jutted up and little streams filled with tadpoles and crabs meandered between the foliage. Herons and egrets made their homes in the sun-bleached wetland area. Finally the grasses subsided until the glorious blue of the bay shone in the distance.

His house—actually, his cousin’s house that had been kindly loaned out to Brody for the next several months while his cousin was stationed with the army in the Middle East—stood in the distance. He passed the home of his one and only neighbor on the secluded street.

He’d met her once. Madison Jacobs. She’d come over that first week after he’d moved in to introduce herself. She seemed nice enough and certainly she was easy on the eyes. But Brody hadn’t moved here to make friends, not even acquaintances, really. He’d moved here to get away from everything about his past in New York.

The secluded little Virginia town was the perfect spot for his self-imposed hiatus from his old life. He’d taken a job as a detective for the county’s sheriff’s department, one that was considerably slower paced than his former position in the Big Apple. Aside from his job, he avoided most of the townspeople when possible and whenever he needed a dose of anonymity, he visited the nearby city of Newport News or headed to Virginia Beach.

His neighbor had seemed to take the hint and hadn’t bothered him since that first introduction when he’d moved in. The woman—pretty with her sun-kissed skin, natural blond hair, and sparkling blue eyes—would smile tightly and wave as she passed him in her SUV coming and going. The action wasn’t overly exuberant, but appeared to be more of a forced courtesy.

Perhaps he should have been friendlier when she’d rung his doorbell, toddler and cookies in tow. He’d taken one look at her and known that getting to know her better would be way too tempting. Instead, he’d done the opposite and offered as little information about himself as possible before insisting he was in the middle of something so she’d go home. Her eyes had changed from friendly to perceptive and then annoyed as he’d closed the door. Good. It was better that way.

As his feet hit the dusty road, rocks crunching beneath him, a sharp, high-pitched sound split the air.

Brody slowed his pace and wiped the perspiration around his face with the bottom of his T-shirt. Was that a scream? Or was it the shrieking call of one of the marsh birds?

The Healing Season by Ruth Axtell Morren
The Fountainhead by Ayn Rand
Stripped by Abby Niles
Ozark Trilogy 3: And Then There'll Be Fireworks by Suzette Haden Elgin
Security by Mike Shade
Wyvern's Trim and other stories by Nix Whittaker
The Price of Honor by Emilie Rose
Sixteen Small Deaths by Christopher J. Dwyer
Bait by Leslie Jones
Reunion (A Psychological Suspense with Murder, Mystery and the Paranormal) by Bennington, Jeff