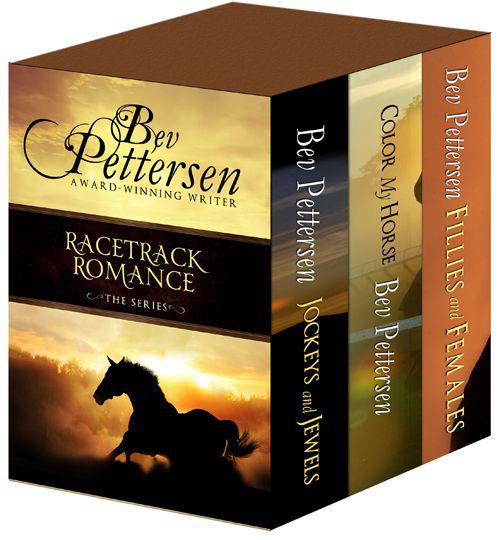 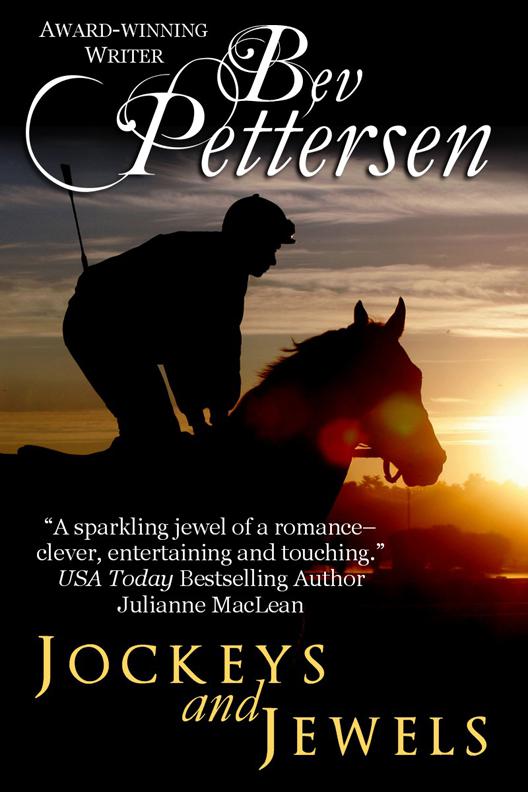 This book is licensed for your personal enjoyment only. All rights reserved, including the right to reproduce this book, or a portion thereof, in any form. This book may not be resold or uploaded for distribution to others.

This is a work of fiction. Any references to historical events, real people and horses, or real locales are used fictitiously. Other names, characters, places and incidents are the product of the author’s imagination, and any resemblance to actual events, locales or persons, living or dead, is entirely coincidental.

To my Mom and Dad who scrimped and saved to buy my first horse.

The track looked safe—no holes, no ruts, no reason for a horse to break a leg—but Kurt’s sense of foreboding grew. He yanked up the collar of his oilskin, hoping the raw weather accounted for his unusual edginess. A red-coated man with jowly cheeks trudged through the mud, blasted on his bugle, and the post parade began.

Most fans sought refuge in the clubhouse, yet ten feet away two women in stylish raincoats also braved the drizzle. Their heads swiveled as they analyzed each prancing horse, and the gusting wind carried their words more effectively than any loudspeaker.

“That guy next to us is Kurt MacKinnon,” the shorter one said. “Might be worth putting money on his horse. He trains the good-looking gray.”

“They're both lookers,” the second lady said. “But ugly tries harder. Besides that gray doesn't want to get wet. Don’t know if he’ll run well.”

Kurt kept his head averted, indifferent to their opinions, although the second lady was absolutely correct. He didn’t know if Lazer Cat would run well either. The horse had performed poorly in four starts on a sunny day, but maybe he’d like the shitty weather. Lazer really couldn't run much worse. Kurt hated to give up on the colt, but he had to show some ability. And soon.

The line of horses moved closer. Kurt’s optimism plunged when he noticed the antics of his contrary horse. Lazer humped his back and flattened his ears as he tried to sidestep the rain and retreat to the barn. Only a stoic escort pony kept him in line.

It was obvious the horse hated the weather, hated the track, hated to race.

The phone in Kurt’s pocket vibrated. He pivoted from the rail, giving the two ladies a polite nod as he passed. Ignoring their self-conscious giggles, he scanned the display.
Unknown caller
. What fool would call just before a race?

“MacKinnon.” Concern roughened his words as he climbed the grandstand steps. Not many people had his private number, and his racing assistant was extremely competent. It had to be a mistake. Or an emergency.

Kurt sucked in a breath. Archer wasn't the type to press wrong numbers. “Hello…boss,” he said, then paused for a second. “How're things at headquarters?”

“The usual. How about you? Heard you’re a full-time trainer now, making bags of money.”

“Everything’s good. Got a race about to start.” Kurt’s mouth tightened as the horses approached the starting gate and Lazer shied from a swooping bird, almost dumping his jockey. The colt wheeled and rammed a member of the gate crew, but two men with squared shoulders and a no-nonsense attitude rushed forward, locked their arms behind Lazer's tail and shoved the reluctant horse into his slot. Good job, guys, Kurt thought, marginally relaxed now that Lazer was in the gate.

“It’s been a while since you requested the leave of absence,” Archer said. “Bet you miss police work.”

Kurt jerked to a stop and for a moment forgot about the race. Eleven months ago, drained by his undercover job, the lies, the deception, he’d handed Archer his resignation from the Royal Canadian Mounted Police. Archer had convinced Kurt to accept a leave instead. They both knew he didn’t miss police work.

He shook off the raw memories, tucked the phone between his ear and shoulder, turned and re-focused on the horses clustering around the gate.

The race would start soon, just three left to load. Lazer was the only gray in the race so he would be easy to spot, especially easy since his habit was to gallop at the back of the pack, sightseeing.

“We need to talk.” Archer’s voice pricked like a stubborn mosquito.

Kurt regretted answering the call. He liked and respected Archer, but it seemed a lifetime since he’d reported to him. He made a sound deep in his throat that he hoped passed for agreement but kept his attention on the gate.

All the horses were in. Lazer stood straight, ears forward, well balanced. Despite the colt’s flightiness, this might be the day he lived up to his pedigree. A knot coiled in Kurt’s stomach as he waited for the gate to spring. He hated having no control, but it was up to the jockey and horse now. Any second—

“Sorry,” Kurt said, watching Lazer’s forehead and willing the horse to break clean. The white bridle gleamed through the bars of the starting gate, a beacon even on this drab April day. “I’m through with police work,” he added. “Go ahead and process my resignation.”

“But it's just a few weeks,” Archer said. “We need you to race in Calgary. I know it's a hick track, and you're a big-time trainer, but this is critical.”

“We need an inside man we can position fast.” Archer’s words escaped in a rush. “Someone who knows racing but has undercover experience. You’re the only qualified officer available.”

“But I’m not available.”

Archer cleared his throat with an ominous growl, a sound Kurt had heard too many times before. He wanted to close the phone. Shut out bad news.

Kurt jerked back, gut punched. Squeezed his eyes shut, struggling to breathe even as the starting gate clanged open. He’d partnered with Connor on a nine-month job in Halifax where they’d infiltrated a biker gang and stopped millions of dollars of crack from hitting the streets. It had also forged a sincere friendship between the two men.

Kurt forced his questions past the brick of pain clogging his throat. “How? Where—” But grief split his words and he stopped, hating the emotion weakening his voice.

“Connor was posted in southern Alberta,” Archer said. “Kept an eye on drug flow between Calgary and the U.S. border. Yesterday was his day off, but somehow a horse trailer caught his attention. He gave roadside assistance then ran the plate and followed the vehicle. Our last fix was at the Calgary track, where he spoke with a jockey named Julie West. Ten hours later he was found in his vehicle, north of the city. Shot with a twenty-two. Two bullets to the chest, one to the head.

“You’ll report directly to me,” Archer went on. “We'll give unlimited support. Just poke around a bit. Check out this Julie person. Leave your best horses home though, so you don’t draw attention.”

Kurt stared across the infield, numb to Archer's relentless voice and the crowd’s cheers. Grief churned with rage as he fought to regain his composure. Any return to the bleak undercover world filled him with distaste, but it was obvious he’d accept this assignment. Some ass-wipe had murdered Connor.

And as Lazer straggled across the finish line, last in an undistinguished field, Kurt’s mouth twisted in a humorless smile. At least he had the perfect horse to ship to Calgary.

Crisp air nipped Julie West’s face as she balanced in the saddle and concentrated on holding her horse to a steady gallop. Hooves pounded behind them. Another rider charged past, spraying dust and dirt. Julie’s horse flattened his ears and shoved at the bit.

“Not yet, Skippy,” she murmured, conscious of the trainer’s instructions. She checked over her shoulder for other runners before dropping the gelding in on the rail. On the backside, in front of the neat row of barns, she finally loosened her grip and crouched further over his neck.

The horse rocketed forward, his powerful burst filling her with adrenaline. The rail knifed past as they hugged the turn and charged down the lane. Thirty feet past the grandstand, she rose in the stirrups, letting her weight fall onto the reins. Skippy slowed to a canter then down to a bouncy trot.

Perfect. She stroked his sweaty neck, grinning her approval. The old horse felt great. He was such a pro too, never wasting energy but not holding anything back. She let him relax by the gap in the rail before turning and walking off the track.

Ed Harrison, Skippy’s trainer, stepped forward, and her hope soared when she spotted the rare smile cutting his craggy face. Maybe today would be a breakthrough. For five weeks she'd exercised his horse. If Harrison let her ride in a race, it would be a major step toward acceptance as a jockey. The veteran trainer was well respected and if she picked up a mount from him, other trainers would surely follow.

Harrison dragged a thoughtful hand over his moustache before attaching a leather line to the bridle, every movement methodical. She sensed he was coming to a decision, but nothing ever hurried the cautious trainer. Skippy galloped better for her than anyone else, but would Harrison think she was good enough to ride in a race?

She scratched the horse on his damp neck, trying to steady her rapid breathing, waiting for the decision that might launch her career.

“Not bad.” Harrison’s slow nod was almost grudging. “At first the old guy seemed to be asleep, but he found another gear when you brought him in on the rail. Guess I’ll name you as his jockey this Friday.”

She clamped her mouth, knew she should look cool, but her emotions pushed through and she vaulted from the saddle, a huge grin on her face. Even Harrison acknowledged the occasion with a rusty smile before leading Skippy away, careful to avoid an approaching rider.

“That’s right! Keep your distance,” the rider bellowed. Sandra’s thick ponytail, the same color as the chestnut filly she led, swung jauntily beneath her dented helmet. “This horse of Chandler's is a menace.”

Julie adjusted her protective vest as she studied the next horse on her gallop schedule. The young filly was wide-eyed and skittish, and it was reassuring that her friend was ponying. Sandra was one of the most experienced escort riders at the track, and she and her Quarter Horse, Okie, could calm the most unruly animal.

Sandra heaved a martyr’s sigh as she stopped the horses beside Julie. “Ponying for Bill Chandler isn’t worth the measly pay. That man is a pain in the ass.” She snapped the lead just in time to keep the high-strung filly from nipping her thigh. “So is his horse,” she muttered.

Julie tightened her helmet, her euphoric glow untarnished by Sandra’s complaints. It didn’t matter what kind of horses she rode the rest of the morning because it was finally happening. She was going to ride a nice horse in a real race. Nothing could mar this day. She was still smiling, even when the filly shied from the bellowing trainer behind them, and she was forced to scramble away from the horse’s swinging hindquarters.

Just Babies by Bloom, Paul
Year of Being Single by Collins, Fiona
The Eunuch's Ward (The String Quartet) by Smyth, Silver
Twisted (Delirium #1) by Cara Carnes
Banished by Sophie Littlefield
All for a Song by Allison Pittman
EG03 - The Water Lily Cross by Anthony Eglin
Nothing Short of a Miracle by Henry, Carol
Spiral (Spiral Series) by Edwards, Maddy
Emma's Heart (Brides of Theron 3) by Pond, Rebecca, Lorino, Rebecca