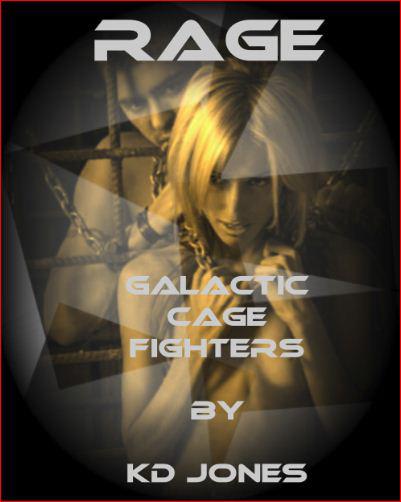 Published by Kizzie Campos through Amazon.com

Special Agent Rachel
Kegan of the Intergalactic Department of Justice is sent on an undercover assignment. She must pose as a fighter for the Galactic Cage Fighters Association, GCFA, in order to investigate the disappearances of several human women. In the midst of all the blood and broken bones common in this sport, she finds herself attracted to a half-human, half-alien fighter with an inner beast—literally.

Rage The Animal is angry that a pure human female has been hired to travel on the GCFA tour circuit. No matter what he says or does, or how hard he tries to intimidate the little human, she refuses to quit. Normally he could ignore the human, but something about her stirs his inner beast and the man just cannot resist.

For all the girls who enjoy watching a good smackdown and reading a hot romance, this one has them both.

This e-book contains sexually explicit scenes, adult language, and violence that may be considered offensive to some
readers.

This e-book is a work of fiction. The names, characters, places, and incidents are either the product of the author’s imagination or are used fictitiously and any resemblance to actual persons, living or dead, business establishments, events, or locales is entirely coincidental.

Special Agent Rachel Kegan of the Intergalactic Department of Justice, more commonly known as the IDJ, circled her opponent slowly. He certainly had an advantage over her with his height and size. Special Agent Trig Collins was 6’5”, towering over her own 5’6”. He held himself with grace despite his muscular frame. He had beautiful mocha-colored skin and striking blue eyes, and he kept his dark hair shaved short.

However, while
Rachel weighed only 125 pounds compared to his 220, she knew his main weakness: his right knee. It had been broken several times in the last two years. Though it had been repaired fairly quickly each time, he still favored it, keeping it behind his body and protected.

She threw
some punches, knowing they would be easily blocked. She began breathing heavily to make it look as if she were tiring. She went to kick his stomach, which he anticipated and responded to by grabbing her leg. That move was one that
she
had anticipated. She let all her weight go, letting it pull both her and her opponent, still holding her leg, to the floor. She grabbed the surprised man’s leg and twisted with all her might until she heard a snap.

“Match over,” she called to her opponent
, who was rolling on the mat in pain.

“For the love of God
, Rachel, did you have to break it again?” the man cried out, clutching his broken leg.

Rachel jumped up from the mat and stretched her body. She
was sure she would have quite a few bruises, but she wouldn’t need the healers to fix them. They would heal on their own in a few days. She walked over to her downed opponent and squatted beside him. She hit the communications device on her badge. “Computer, send healers to the training facility immediately.”

The computer answered
in a feminine voice, “Healers are on their way.”

“Come on
, Trig, it’s not that bad.” She poked at his leg, causing him to moan again. “It’s a clean break and the healers will fix it up in no time.” Even as she finished speaking, the healers had arrived to administer pain control medications.

She stood up
walked across the wide, open training space, filled with mats placed around the room to practice hand-to-hand combat. She was headed towards the showers when she heard someone call her name.

She stopped and looked around the training facility. Chief Officer Marks
was waving her over. Marks was in his early fifties with had salt and pepper hair, but very fit for his age. He was standing next to an unfamiliar man with short dark blond hair and brown eyes, wearing a very expensive suit. She wondered if she had screwed up the paperwork from her last investigation. Marks was always riding her ass about not crossing her T’s and dotting her I’s.

“Sir,” Rachel stood at attention before her Chief Officer. She gave a sideways glance at the other man
, noting that he was probably in his forties. He wasn’t as tall as Trig, but he had a muscular frame.

“Agent
Kegan, after you take a shower, I’d like you to come to my office. There is a mission I believe you’ll be perfect for,” Marks told her.

“Yes
sir.” Rachel walked away with the odd feeling that this mission was going to be different than any other that she had ever had before. She had learned to listen to her intuition over the years; it had never steered her wrong.

Rachel sat in Chief Officer Mark’s office with him and the other man in the suit. They were looking at the TV monitor.
The video feed on the TV showed a huge, circular arena with rows of seats surrounding a large, dome-shaped cage in the center. Two men were inside the cage facing one another. Both men were aliens. One was a halfsie, part humanoid and part Bestial. The other was a full-blood Artarian with three arms. Two commentators were working the fight.

“
Current GCFA Champion Rage is getting his face pummeled by the Artarian. Rage just kicked the Artarian in his left knee! Artarians are known to have weak knees, Poland,” Commentator Johann said.

“This is getting interesting
, Johann. Rage is circling the Artarian. Oh! He just kicked the Artarian’s back,” the second commentator, Poland, replied.

“The
Artarian is fighting back. He uses his third arm to knock Rage on his ass!”

“This is just an incredible show of brute strength and fighting talent.”

“Rage just got tossed over the Artarian’s head, landing hard on the mat, face first. That had to hurt!”

“I’m sure that it does. Look how the
Artarian is preparing to mount him.”

“Where did th
at strength come from? Rage just threw the Artarian off of him, sending him flying hard against the cage wall. Now Rage is drilling him with punch after punch.”

“The
Artarian is down! The ref is out there counting it down. Three! Two! One! Match over!”

“The GCFA Champion is
still Rage the Animal!”

The overhead screen froze on the image of the bloody fighter
winning the Galactic Cage Fighting Championship. The GCFA was the largest sport fighting promotion company in the universe. They produced events in different regions across the many galaxies, dividing them into eight divisions. GCFA promoted full-contact sports involving mixed fighting disciplines such as boxing, wrestling, and martial arts. The fighters with the GCFA were all full-blooded alien or halfsies.

The
recorded fight they had just watched was one Rachel was familiar with. She had actually watched the match with her friends and co-workers at the local Galactic Pub. Rage had been a favorite of her uncle’s. “I am not sure I understand what the mission is. Did you want me to investigate the fighter?” Rachel asked, not taking her eyes off of Rage. Even covered in alien blood, he was hot. He stood over seven feet tall and was reported to be 250 pounds. All muscle.

“
We want you to start your investigation with the GCFA circuit. It may lead to individual fighters.” Marks handed Rachel a personal electronic display, PED, with a beautiful woman’s image on it. She had long, sable brown hair and chocolate brown eyes. She was of Hispanic descent and human, at least in appearance.

“Her name is Lucinda
Stamos. Her uncle is Senator Jon Stamos of the Eastern Quarter. She went missing a little over two months ago.”

“What does her disappearance have to do with the GCFA?” Rachel studied the image of the young woman.

“She was celebrating her college graduation with friends. They went to one of the GCFA matches. According to her friends, she started an affair with one of the fighters. She followed him on their circuit tour. Somewhere along the way, she just disappeared. Her friends and family haven’t heard anything from her and the GCFA released a statement that she left the on her own.”

Rachel looked again at the image of Rage. Was he involved
somehow? Could he be the boyfriend? A part of her hoped that he wasn’t. “Who was the fighter she was involved with?”

“Talon
, according to the friends’ reports. But this is bigger than just her. She’s the eighth human woman to go missing in the last six months. They were women of different ethnicities, from all over the eight regions. The one common thread linking them is that they were all last seen at a GCFA match before they were reported missing. I’ve downloaded the report on each woman for you.”

She
quickly scrolled through the summary of each case. Each woman had last been seen in one of the regions on the GCFA circuit. The circuit covered eight regions: Alpha, Beta, Gamma, Omega, Delta, Kappa, Theta, Zeta. Each region was also separated in four quarters, Eastern, Western, Northern, and Southern, each of which contained a million galaxies. That was a lot of ground to cover, and it was only a small piece of the enormous universe.

As Marks was explaining the disappearances of the other women, Rachel looked at their i
mages on her PED, one right after another. They were all young and beautiful. “Did you question the fighter, Talon?”

“We tried, but the GCFA lawyers have been giving us grief about harassing their fighters.
It’s been hard to get answers from him or anyone associated with the GCFA. The statement that their publicity team released stated that each of the women in question left of their own accord.”

“So you want me to question them?”

“Not directly. We want you to go undercover as a new female fighter for the GCFA.” Marks continued to explain. “They’ve been off the circuit for two months. They’re about to re-start their GCFA tour again in about six weeks. We want you to pose as a new fighter and go with them on their circuit to investigate from the inside. We believe they may talk to you as a fellow fighter. I have to warn you, if you accept this assignment, you’ll be going in solo.”