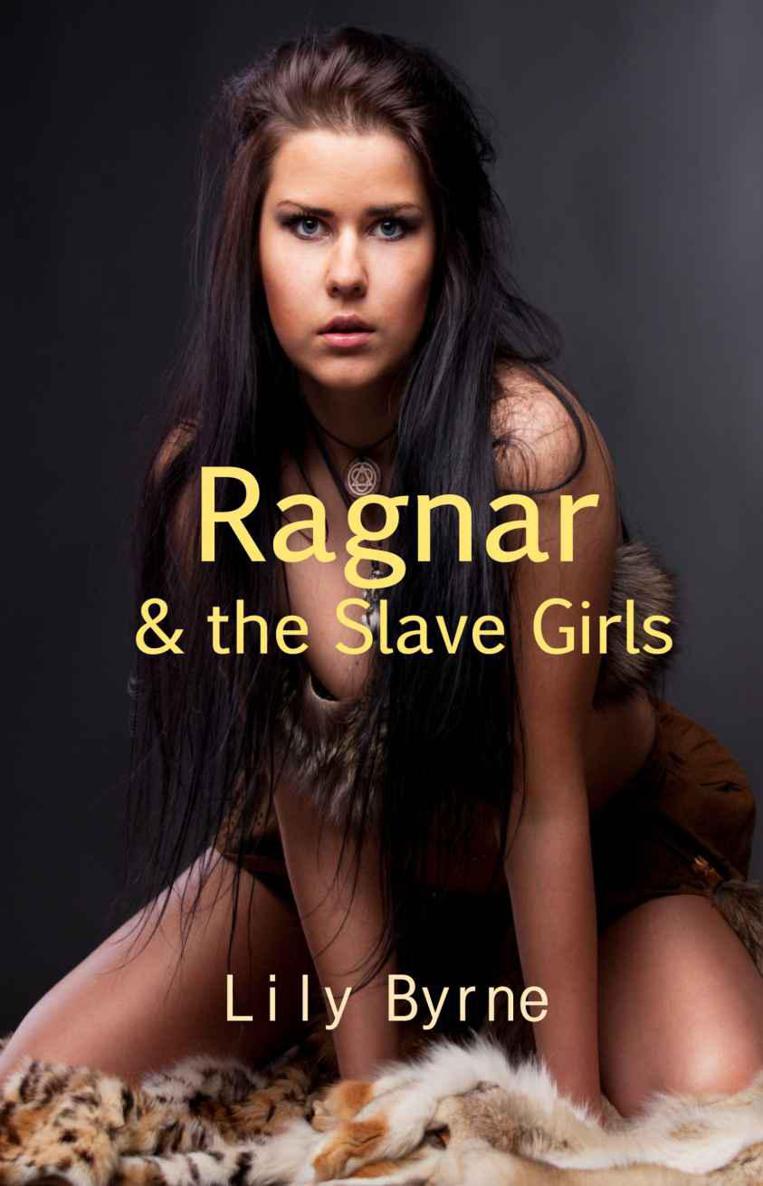 'Ragnar & the Slave Girls' is published by Taylor Street Publishing, who can be contacted at: http:

'Ragnar & the Slave Girls' is the copyright of the author, Lily Byrne, 2012. All rights are reserved.

Almost one year after ‘Ragnar the Murderer’, the Danes still live uneasily in Britain, alongside the English.

To feel the gain.

The ancient order will overturn,

Britaine will pay its due.

The dishonour will be avenged,

Those disgraced will start anew.

The wind roared through the dark wood. Branches knocked against each other and bare twigs trembled, hissing together, tormented by the gusts. At midnight the sky was empty of a moon; only the tiny stars burned in the blackness to show wanderers the way.

Hidden alone amongst the trees, the house showed no light from any window. The craftsman’s broken sign creaked against its frame, and the wind screeched past harshly, trying to knock it to the ground.

A candle flared, lighting the window. A shriek speared the cold air, then a yell of pain and gurgling, choking while another screamed on and on, until an abrupt cry halted the noise.

“
Quiet or we’ll kill you!” snapped a clear voice. But there was no one around to hear. No one to intervene and ask what was happening, or prevent it.

Dark figures slipped out of the formerly peaceful home, dragging another with them who slumped hopelessly in their arms.

The light from two large, ornate candles pierced the darkness of the small cave as they spluttered in the damp, stale air. Liquid dripped from crevices, the plinks and sploshes like erratic measures of time passing.

A makeshift bed of bearskins in one corner and various trappings of women’s magic–black amber, a staff set with brass, blood stained runes–revealed this was the living quarters of someone powerful.

Two figures huddled over a steaming cauldron which, strangely, did not sit on a fire. The older one, the stout woman known to many as a sorceress, peered at the bubbling liquid inside and smiled through her broken, discoloured teeth.

“
It will be,” she said to her handsome, young male companion.

“
Thank you,” he replied. “They’re fools and deserve their fate. They don’t see the truth.”

“
Don’t worry. Your plan will be successful. I have seen it.”

The young man had other intentions however, which he wasn’t telling her. He didn’t simply want to hurt his enemies; he wanted a better life for himself. And that could only be achieved by drastic measures.

Ragnar strode through Hallby, anxious to share his news. It was a chilly, early spring evening and he pulled his cloak tightly around him, then smiled to see the lights of home ahead. The small, thatch-roofed house he and his fellow Huskarl warriors had built was a welcome sight, set among the other Danish houses, safe within the village walls.

“
Aelfwyn?” he called, shutting the wooden door and throwing off his cloak. He must fill in those gaps in the wattle wall as there was a draft, especially at this time of year.

His wife sat by the fire in the centre of the room, which was raised on a clay hearth to make cooking easier, the smoke twisting upwards out of the hole in the roof. She was nursing their son Alvi, a large baby who, at two months, drank milk greedily and seemed to grow every day. Aelfwyn looked up and smiled, her dark hair tied back, her body rounded and fuller than before she fell pregnant.

Ragnar paused, admiring the sight of his family’s contentment. Lit by the firelight, his wife and son’s sleepy faces looked soft and rosy. What a shame he would have to spoil Aelfwyn’s contentment.

He laughed, looking towards the bearskin-covered bed at one end of the house, their bed, which at present was only used for sleeping and night time feeding of Alvi. But hopefully in future it would become a marriage bed again.

Before he could continue, Aelfwyn’s midwife bustled in. She visited the family every day since the birth.

“
Ragnar, I must speak to you.” She drew him aside. “Your wife can’t have any more babies, I’m afraid.”

“
What I mean is the next baby could kill her.”

“
But why?” His mind full of his own news, he couldn’t concentrate on something else.

“
You are a big man and Aelfwyn is a little woman. You make big babies and she just can’t take them. I've seen this so often, I’m sad to say.”

His shoulders slumped as he remembered the birth. He had worked at his usual Huskarl duties while the midwives attended Aelfwyn, who worried the whole village with her day-long screams of pain. After the long evening of celebrating the forthcoming birth with his comrades, in the early morning he returned home, staggering due to the excessive drinking he’d enjoyed. His joy at seeing her sleeping peacefully with their newborn son had withered into concern at the unrelenting blood flowing from her afterwards. She had almost died. The other Huskarls clapped him on the back for fathering a son, but his best friend Bjarni was the only one who noticed the fear and shock in his eyes.

“
I’m sorry, but I had to tell you,” continued the midwife.

“
No. We know of ways to prevent babies before they even grow. Come and see me when you’ve thought about it.”

“
Yes, but she refuses to believe me. She's forgotten the birth already, but she was lucky we were able to stop the bleeding in time.”

She was right. He didn’t want his beloved wife to go through that again.

“
See you tomorrow.” The midwife, realising he was deep in thought, patted him on the arm and went out into the night, swirling her cloak round her.

He sighed. He must still tell his wife what had happened, before she heard it from someone else, so gritting his teeth, he returned to her chair.

Her eyelids drooped but he knelt down and kissed her over Alvi’s head.

“
Mm,” she mumbled, his beard scratching at her cheek in its familiar, beloved way.

“
I must tell you something,” he whispered. “Sorry, but it’s horrible.”

“
Herewulf has been murdered. And his wife Mildrith is missing.”

Aelfwyn gasped. She checked to ensure Alvi hadn’t woken, then gazed at her husband.

“
They think last night. Some customers found him in his workshop this morning.”

Aelfwyn’s grey eyes filled with tears. “How terrible! Remember how you saved his home last year when that tree nearly fell on it?”

“
Yes. I always had a new pair of boots when I needed them.”

Mildrith had been grateful to him for another reason, but he’d never told Aelfwyn about that.

“
So do they know who did it? Eadbald was the last person murdered round here, wasn’t he?”

“
Do you think he’s back killing people for their money again?”

“
I don’t know. But anyway, I don’t want you going out unless you have to, and don’t let anyone in you don’t know. Your mother and sister can fetch and carry for you.”

“
You worry too much. We don’t live outside the village like Herewulf. There are people around all the time.”

“
And anyway, if anyone threatened me, Alvi would scream the house down. You know how loudly he bawls.”

Ragnar smiled. His son had learned to protect his mother already, with a cry loud enough to disturb the gods above. He didn’t tell her the shoemaker had been killed the same way as Eadbald - the Danish way.

Mildrith awoke to the sound of dripping water. She shivered as her eyes adjusted to the darkness with a flaming torch the only spot of light, set in a crevice of the rock wall.

She sat in a cave with her hands tied behind her back, unable to see or hear anyone else nearby. Just the irregular drip, drip, drip, of water - or some other liquid, like blood?

A tremor ran through her as she remembered the man cutting her husband’s throat and leaving him to gurgle his way to death, while his accomplice held her back. They had carried her off and she had passed out from fear and shock. They didn't speak at all - not one word - so she had no idea why they’d done it. They hadn’t even fought with Herewulf, just walked in to the bedroom and coldly executed him.

She shivered in the damp, musty air, then footsteps announced someone’s approach. So terrified she might wet herself, she clamped her legs together.

The man approached, holding a torch. But was it a man? A wolf’s head covered his face, his glaring eyes framed by the sharp teeth in the fixed open jaws. Jewels replaced the wolf’s eyes and the fur of its neck hung down over the man’s shoulders. He also wore a fur cloak but darkness covered the details of his other clothing.

He stepped towards the shaking Mildrith and cut her bindings, pulling her along with him.

But he didn't answer, just dragged her down a rocky tunnel.

“
You killed my husband. You should at least tell me!”

“
You won’t need a husband,” he growled. Blond plaited hair escaped from the wolf’s fur at the back, so he must be human - English or Danish.

He pulled her along more roughly, towards the entrance to a lighted cave where shadows moved and voices muttered.

In Hallby, Saehild and Bjarni sat eating dinner among the untidiness of their home.

“
When's the next feast?” she asked, chewing on a gristly piece of chicken. “Jolablot was so much fun, I …” She broke off, unwilling to tell him she’d spent the feast with Ljotr in his shelter, far away in the woods. She trembled inside at the memory of the fun with him, drinking and fucking with no thought of household duties.