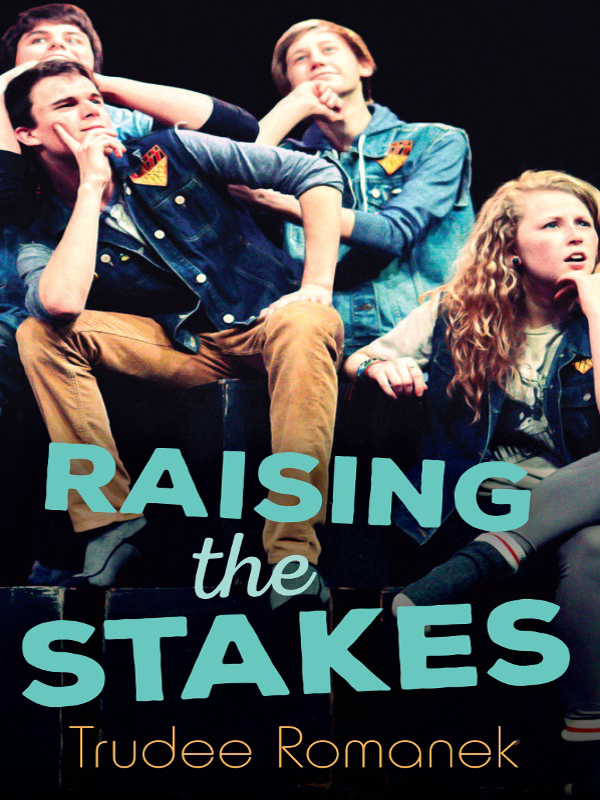 First published in the United States, 2015

Summary:
In this short novel for middle readers, Chloe’s determination to succeed in the world of improv damages her friendships and hurts her team’s chance to win.

For Mom and Dad, and for Brina,
who continually inspires.

T
raffic noise swirls around us as Faith, Nigel and I pick our way along the icy sidewalk toward school.

“Okay,” I say. “Thirty seconds. What have you got for the theme truth? Go.” I start my watch timer and slip my fingers back into the cozy warmth of my glove.

I saw
truth
last night on a list of topics for the Theme event in the improv book I borrowed from our coach. Nigel and Faith are already staring down at their steadily moving feet, thinking hard.

Tall gangly Nigel is the genius transformer on our improv team. He can turn himself into anything from a steamroller to an erupting volcano. But he also comes up with great ideas for Theme. And now he gets the first one.

“A little kid admitting he broke a glass?”

“Ooh, Chloe,” Faith cries, “how about a court scene? You know, a person on the witness stand. Do you swear to tell the truth and all that.”

Faith and I have been friends since the day in fourth grade when she gave her speech on why she’d never want to be a Disney princess. Back then, she was already wearing her long brown hair in her trademark messy bun. Faith is a solid, all-around improviser. She’s especially good at fearlessly throwing herself into a scene, confident that she’ll figure it out as she goes.

I nod again. “Another nice one.”

The three of us walk to school together every day—well, every day since we all made the school’s improv team last year. We started doing exercises like this on our walk when we had competitions coming up, to get our brains in top shape. Today’s only day one of second semester, and our first competition of this year’s season is still weeks away, but I’ve got big plans.

Some kids probably think it’s weird that Nigel walks with us, since he’s in grade twelve and Faith and I are only in grade ten. But our connection is about
who
we are, not how old we are. It’s about being part of something. When we’re doing an improv scene, all eight members of our team depend on each other completely. Whether the scene is good or bad, we share the experience more than I’ve ever shared anything with anyone else. That’s a pretty good reason to walk together. That and the fact that the three of us only live a couple of blocks apart.

Up ahead, some girls pore over a fashion magazine as they wait for the traffic light to change. One of them sighs enviously, her breath forming a little cloud that hovers in front of her until the wind snatches it away.

“George Washington!” Faith blurts out. “He said,
I cannot tell a lie
.”

The girls look over, then return to their magazine. They’re used to us. Everyone knows the kids on the improv team aren’t afraid to draw attention to themselves. We’re all big hams—eight goofy kids among hundreds of normal ones at Harrington.
Of course we walk together! Most of us eat lunch together too.

“How about a lie-detector test in a police station?” Nigel offers.

He and Faith are doing better than they ever did last year. I hold up the hand I’ve been counting on. “Five solid ideas in just fifteen seconds! You guys are on fire this morning!”

They beam at each other. Then Nigel yelps, “Pinocchio’s nose! And how it shrinks down when he tells the truth.” His brown eyes open wide as another thought hits him. “And he could ask someone, ‘Do I look ridiculous with this long nose?’ and the person lies!”

An icy blast of wind hits us, and Faith pulls her scarf tighter. “In medieval times,” she says, “didn’t they say a sword was true if it was straight?”

We turn the last corner. There are more kids around us now, coming from all directions. Most are walking, though a few ride bikes through the slush on the roads. At the end of the block, a two-story brown-brick building peeks out from behind
snow-covered oak trees. That’s Harrington High, our school—a school that, starting today, offers an improv course!

I look down at my watch. “Three seconds left.”

I still can’t quite believe we’ll get to do improv during class. Nigel and a couple of the others from the team aren’t in the class, but it should be a blast for the five of us who are.

At the last moment, Nigel says, “Maybe use that saying ‘Truth is stranger than fiction’ somehow.”

“And that’s time. You got eight really good ideas! That was amazing!” I squeal, pulling them into a three-sided hug.

Then I hold them both at arm’s length. I haven’t shared my game plan with anyone yet—not even Faith—but it’s time. “Guys,” I say, looking from one to the other, “I really think we can do it this year.”

Nigel frowns down at me. “Do what exactly?”

“Make it all the way to the national championship, silly!” We start walking again, arm in arm, as I explain. “This year’s team has got everything we need. Think about our four events—our Life and Story events are strong, Theme gets
better with every practice, and our Style will blow everyone away.”

I know it’s true. I’ve been thinking about it for months now. Our best chance of getting through zones and regionals and on to nationals is this year, before Nigel and Asha, who’s also in grade twelve, graduate. And getting to nationals would be a dream come true for me.

“Our team
is
pretty strong,” says Faith, “but nationals? You think so?”

Nigel shrugs. “That’s if we want to go to nationals,” he says.

“If we
want
to?” I squawk. A kid walking behind us almost bumps into me. “How could we
not
want to? First of all, it means we’d get to do more improv. And second, nationals is the ultimate improv competition! It’s like the end goal—you work, you get better, you make it to nationals!”

“Improv is definitely fun,” says Nigel, pulling my arm to start me walking again, “but nationals is really far away. Just getting there would cost a bundle. You know Harrington never spends any money on the improv team.”

“He’s right about that,” Faith says.

We all know that Ms. Quinn’s award-winning camera club sucks up most of our school’s arts budget. Between the club’s equipment purchases, competition entry fees and annual photography exhibit, there’s usually not much money left over. But I’m ready for this argument.

“We can do fundraising for the money to get us there,” I tell them. “And
CCIG
pays for dorm rooms for out-of-town teams who qualify.” The
CCIG
—the Cross-Country Improv Games—is the organization that runs the whole tournament.

Nigel looks surprised but not convinced. “Going to nationals would mean leaving Harrington for a whole week,” he says. Then he shakes his head. “Can’t do it.”

Ahead, a gust of wind sets the oak branches shaking too, and clumps of snow topple to the ground.

Instinctively I kick into improv mode, silently brainstorming ways to change his mind. “But Nigel,” I try, “we’d get to do improv for a whole
month longer than we usually do. Think of it! Four more weeks of nonstop practices after regionals, and then nationals itself—a full week of workshops and games with other kids exactly like us!”

I’m positive Nigel would love nationals. He adores doing improv. Last year when our season was over, he moped around school for weeks.

He smiles. “Well, that part
would
be terrific.” His smile fades. “But being apart from my sisters that long? No way.”

Seriously?
I can understand why Nigel adores little Patty, who’s as sweet as can be, but Sarah is eleven, the same age as my brother, Ned. I’d do a happy dance if I could get away from annoying, video-game-addicted Ned for a whole week.

We’re stamping slush from our shoes and heading in through Harrington High’s front doors and I still haven’t got Nigel on board. Then a kid pushes past me, staring at his cell phone, and an image of Ned glued to his computer screen pops into my brain.

“Skype! You could Skype with them,” I practically yell, ignoring the stares of other kids in the hall. “Every night even.”

Nigel brightens. “I forgot about that. And four extra weeks of improv would be amazing!” He flashes me a grin. “Okay, maybe I could handle going to nationals. See you two at lunch.”

I’m grinning too as he heads off toward the grade-twelve lockers.

“When did you get so pumped about nationals?” Faith asks as we turn down our hallway.

I think for a second. “I guess it started when we watched the national finals webcast last year,” I say. “I’ve been thinking for a while that I don’t want to grow up to be one of a billion boring, identical people doing boring, identical things, you know? I want to
do
something. Something special! Maybe improv is our chance.”

Faith nods, so I don’t have to explain the rest—that to really leave my mark, I’ve decided I want to be an improv performer. As a career, I mean. It seems easier to keep that part to myself for now.

As for the Harrington High improv team, it’ll take plenty of hard work, but we’re destined for nationals.

I
’m sitting in homeroom with ten minutes until history class starts when the intercom crackles to life.

I frown as I gather up my books and head into the hall. What could they want me for?