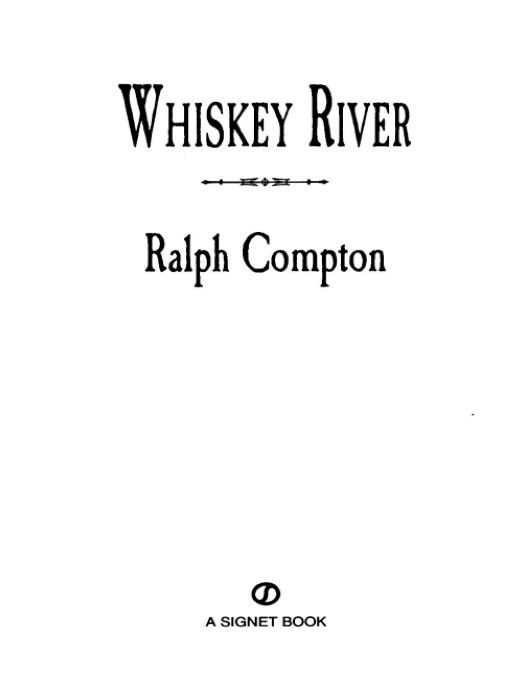 Table of Contents
Â
Epigraph
Title Page
Copyright Page
Dedication
Â
Chapter 1
Chapter 2
Chapter 3
Chapter 4
Chapter 5
Chapter 6
Chapter 7
Chapter 8
Chapter 9
Chapter 10
Chapter 11
Chapter 12
Chapter 13
Chapter 14
Chapter 15
Chapter 16
Chapter 17
Chapter 18
Â
RALPH COMPTON
USA TODAY BESTSELLING AUTHOR
THE TRAILSMAN
“Compton writes in the style of popular Western novelists like Louis L'Amour and Zane Grey . . . thrilling stories of Western legend.”
â
The Huntsville Times
(AL)
A DEADLY CHOICE
“I
could
have you court-martialed for murder,” Ferguson said. “Conviction calls for a mandatory death sentence.”
“You speak as though there's some other choice,” said Mark.
“Maybe there is. Have either of you ever heard of Wolf Estrello and his whiskey runners?”
Mark and Bill shook their heads, and Captain Ferguson continued.
“Rotgut whiskey is being brought by steamboat to Fort Smith,” said Ferguson, “and wagoned from there to Estrello's stronghold in Indian Territory. This poison is being sold to the Kiowas and the Comanches. During the war, when we lacked the manpower to strike back, Estrello built a formidable empire, creating a haven for deserters from both sides of the conflict. Now we're ready to infiltrate Estrello's outfit and finish him once and for all.”
“That's interesting,” said Bill, “but it means nothing to us.”
“Suppose there's a way the two of you can help destroy these whiskey runners, and in so doing, regain your freedom, your confiscated property, and full amnesty? Would it still mean nothing to you?”
“Great God almighty, what I wouldn't give for such a chance,” Mark said. 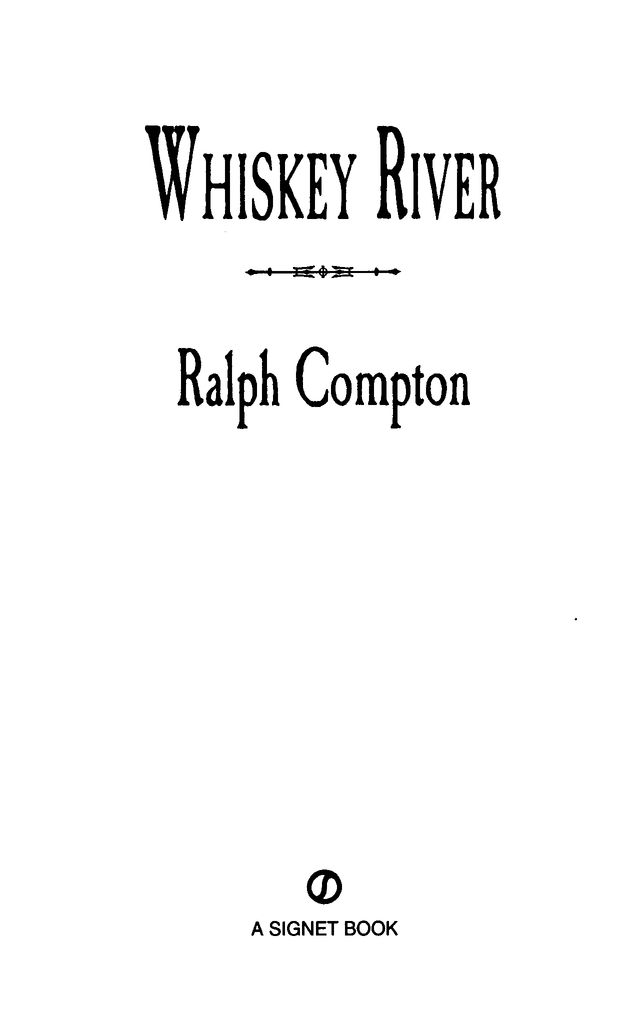 REGISTERED TRADEMARKâMARCA REGISTRADA
Â
Without limiting the rights under copyright reserved above, no part of this publication may be reproduced, stored in or introduced into a retrieval system, or transmitted, in any form, or by any means (electronic, mechanical, photocopying, recording, or otherwise), without the prior written permission of both the copyright owner and the above publisher of this book.
Â
PUBLISHER'S NOTE
This is a work of fiction. Names, characters, places, and incidents either are the product of the author's imagination or are used fictitiously, and any resemblance to actual persons, living or dead, business establishments, events, or locales is entirely coincidental.
The publisher does not have any control over and does not assume any responsibility for author or third-party Web sites or their content.
Â
Â
The scanning, uploading, and distribution of this book via the Internet or via any other means without the permission of the publisher is illegal and punishable by law. Please purchase only authorized electronic editions, and do not participate in or encourage electronic piracy of copyrighted materials. Your support of the author's rights is appreciated.
eISBN : 978-1-101-47681-9

This work is respectfully dedicated
to the memory
of my Texas friend, Tim Smith.
Vaya con Dios.

CHARACTERS
The military at Waco: Lieutenant Henry Sheriff at Waco: Rufe Elkins
Â
The military at Fort Worth: Captain Ferguson, Lieutenant Wanz, Sergeant Waymont, Corp. Tewksbury
Â
Amanda and Betsy Miles: Twin sisters held captive by outlaws after their father was killed
Â
Mark Rogers and Bill Harder: Young Texans forced by the military to join the Wolf Estrello gang in an attempt to end whiskey smuggling to the Indians
Â
The Estrello gang:
Wolf Estrello
Carl Long *
Lee Sullivan *
Vernon Clemans *
Todd Keithley *
Nick Ursino *
Ed Stackler *
Jules Hiram
Walsh Tilden
Hugh Odell
Bert Hamby
Alfonso Suggs
Snider Irvin
Elgin Kendrick
Burrel Hedgepith
Ezra Shadley
Gid Patton
Drew Wilder
Chad Graves
Skull Worsham
Alonzo Bideno
Waddy Jackman
Blanco Cordier
Gabe Haddock
Boyd DeWitt
Phelps Brice
Dutch McCarty
Franklin Schorp
Tull McLean
Aldous Rains
Saul Renato
Ike Jabez
Â
Â
* Men who have sworn to break away from Estrello's gang
Â
The Barton gang (Enemies of Estrello): Elizabeth Barton, Lefty Paschal, Hugh Sterns, French Loe, Whit Sumner, Will Macklin, Tobe Harve, Green Perryman Second Barton gang (after Frank is killed): Elizabeth “Liz” Barton, Sim Bowdre, Kirk Epps, Tasby Winters, Wilson Soules, Weaver Upton, Blake McSween, Tally Weaver, Boyce Mann, Cordell Kazman, Burly Grimes, Duncan Trevino, Seldon Bagwell
Â
Steamboat captains:
Boat #1, The
Aztec
(Captain Savage)
Boat #2, The
Goose
(Captain Lytle)
Boat #3, The
Midnight
(Captain Stock)
Boat #4, The
Star
(Captain Jenks)
Taylor Laird: Owner of illegal distillery in St. Louis
Burt Wills: Second in command to Laird
Captain Tyndall: Captain of Taylor Laird's steamboat
Â
The Military in St. Louis: Captain Hailey, Sergeant Ember,
Lieutenant Banyon
Dan Rowden: Sheriff of St. Louis county
Broken Nose: A renegade Indian
Otter Tail: Friend of Broken Nose
Buckshot Orr: A saloon owner in Fort Smith
Prologue
Waco, Texas. June 25, 1866.
After four long years they were coming home.
Mark Rogers and Bill Harder had much in common. While still young men, they had “learned cow” together in south Texas. When they were of age, they each had “proved up” on a half section of land, just north of Waco, on opposite banks of the Brazos River. The combined half sections were an ideal spread, with the Brazos providing abundant water. But when the war came and Texas seceded, Mark and Bill answered the call of the Confederacy, each just a few days shy of twenty-five. Now, after four long years of war, they neared Waco. They were self-conscious, for they were dressed in rags, which had once been the proud uniforms of the Confederacy. Neither man was armed, and for lack of saddles they rode mules bareback. Mark Rogers and Bill Harder were as gaunt as the animals they rode. When they rode in, Waco didn't
look
any different, but somehow, it felt all wrong. They reined up before Bradley's Mercantile. Ab Bradley had known them all their lives, and as they entered the store, he came limping to meet them.
“My soul and body,” Ab said. “Mark Rogers and Bill Harder. I heard you was dead.”
“There was times when we wished we were, Ab,” said Mark. “Better that than rotting away in a Yankee prison.”
“Yeah,” Bill agreed. “All we have is these rags we're wearin', and two poor old mules as hungry as we are. The Yankees stomped hell out of us, took our guns, and sent us back with our tails between our legs. We heard soldiers would be comin' to put us under martial law until the Congress can decide what our punishment should be. Has any of 'em showed up?”

Loving the Chase (Heart of the Storm #1) by Sharla Lovelace
Mark of Distinction (Price of Privilege) by Jessica Dotta
Nightmares Can Be Murder (A Dream Club Mystery) by Mary Kennedy
Genio y figura by Juan Valera
The Wild by Whitley Strieber
The Coalition: Part II The Lord Of The Living (COALITON OF THE LIVING Book 2) by Robert Mathis Kurtz
Rush (Pandemic Sorrow #2) by Stevie J. Cole
Murder in a Minor Key by Jessica Fletcher
Born Under a Million Shadows by Andrea Busfield
The Gentle Barbarian by V. S. Pritchett