Read Ramage and the Freebooters Online

Ramage and the Freebooters 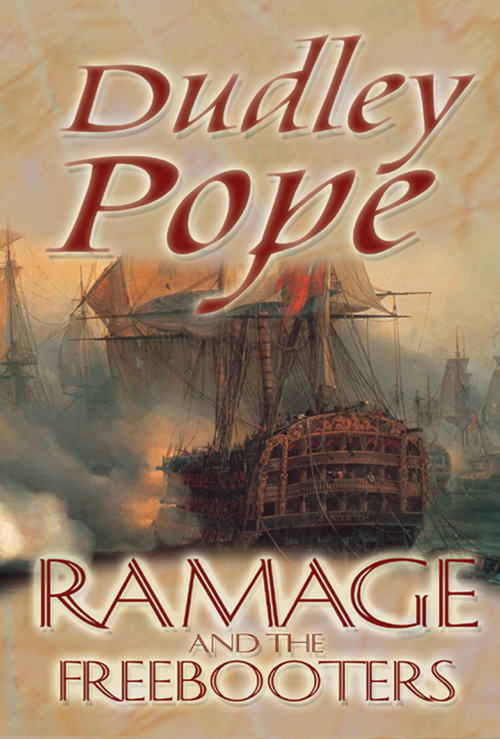 In later life, Dudley Pope was forced to move ashore because of vertigo and other difficulties caused by injuries sustained during the war. He died in St.Martin in 1997, where Kay now lives. Their daughter, Victoria, has in turn inherited a love of the sea and lives on a sloop, as well as practising her father’s initial profession of journalism.

Some of the many compliments paid by reviewers about Dudley Pope’s work:

As Ramage’s carriage rattled along Whitehall he was surprised to see the long and wide street was almost deserted. A file of red-coated soldiers swaggered past the end of Downing Street with the white plumes of their shakos streaming in the wind, boots gleaming black and cross-belts white from carefully applied pipe-clay. A brewer’s dray drawn by two pairs of horses and heavily laden with hogsheads precariously balanced, pyramid fashion, approached the Admiralty from Charing Cross.

A pieman pushing his handcart, corpulent from tasting his own wares and obviously tipsy from sampling those of a brewer, stopped outside the Banqueting House of Old Whitehall Palace and as he mopped his brow bellowed, ‘Buy my plum pudden!’ A pedlar, sitting astride his spavined horse and trying to persuade the occasional passers-by to look at the remarkable bargains in lace and brocade displayed in his large leather pack, glowered at the pieman and moved on another few yards.

On both sides of the street a few people dodging puddles left by a heavy shower of rain looked from a distance as if they were performing some complicated dance.

Ramage sat back, squashing the upholstery which exhaled a smell of mildew, picked up his cocked hat and jammed it on his head and – as the driver swore at the horses, swinging them over to the middle of the road for the sharp left turn under the narrow archway and into the forecourt of the Admiralty – wished he felt more like the naval officer he was than an errant schoolboy summoned before a wrathful headmaster.

The wheels chattered over the cobblestones before the carriage stopped in front of the four immense columns dominating the main entrance. The carriage door creaked open and a hand pulled the folding steps down. The doorman coming out of the entrance hall as Ramage alighted, stopped when he saw the visitor was a mere lieutenant and went back into the building.

Telling the coachman to wait, Ramage walked up the steps into the spacious entrance hall where a large, six-sided glass lantern hung from the ceiling and his footsteps echoed on the marble floor. On his left the large fireplace was still full of ashes from the night porter’s fire and on each side of it were the curious hooded black armchairs which always reminded him of a widow’s bonnet.

From one of them a liveried attendant rose with calculated languidness and, in a bored and condescending voice, asked: ‘Your business…sir?’

The ‘sir’ was not an afterthought; from constant practice it was carefully timed to indicate lieutenants were the lowliest of commission officers and that this was the Admiralty, of whose doors the speaker was the lawful guardian.

‘To see the First Lord.’

Ramage tapped the floor with the scabbard of his dress sword.

The man opened the drawer of a small table and, although the list was obviously the only thing in it, he scrabbled about for some time before taking out a sheet of paper. After glancing at it he looked at Ramage insolently before replacing it and closing the drawer. ‘You’ll have to–’

‘I have an appointment,’ Ramage interrupted.

‘Quite…sir. I’ll try to arrange for you to see one of the secretaries. Maybe even this afternoon.’

‘I have an appointment with Lord Spencer at nine o’clock. Please tell him I’m here.’

‘Look,’ sneered the man, all pretence at politeness vanishing, ‘we get lieutenants in ’ere by the gross, captains by the score and admirals by the dozen, all claiming they’ve appointments with ‘is Lordship. There’s only one person on the list to see ‘is Lordship this morning and ’e ain’t you. You can wait in there’ – he pointed at the notorious waiting-room to the left of the main doors – ‘and I’ll see if I can find someone to see you.’