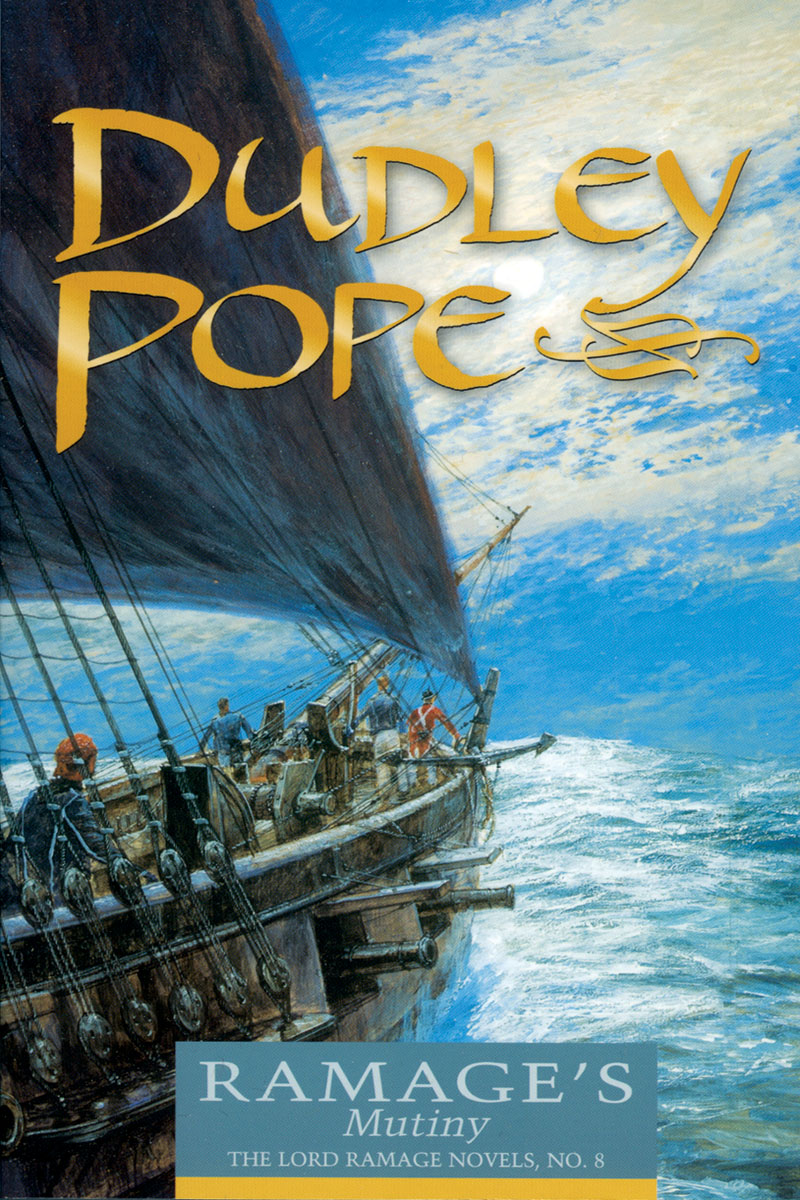 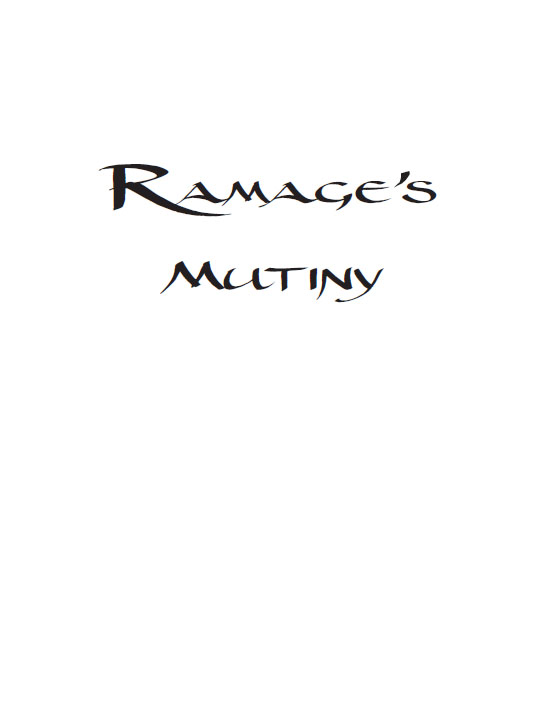 BY
A
LEXANDER
K
ENT
The Complete
Midshipman Bolitho Stand Into Danger
In Gallant Company
Sloop of War
To Glory We Steer
Command a King's Ship
Passage to Mutiny
With All Despatch
Form Line of Battle!
Enemy in Sight!
The Flag Captain
SignalâClose Action!
The Inshore Squadron
A Tradition of Victory
Success to the Brave
Colours Aloft!
Honour This Day
The Only Victor
Beyond the Reef
The Darkening Sea
For My Country's Freedom
Cross of St George
Sword of Honour
Second to None
Relentless Pursuit
Man of War
Heart of Oak

BY
J
AMES
L. N
ELSON
The Only Life That Mattered

BY
B
ROOS
C
AMPBELL
No Quarter
The War of Knives

BY
V.A. S
TUART
Victors and Lords
The Sepoy Mutiny
Massacre at Cawnpore
The Cannons of Lucknow
The Heroic Garrison
The Valiant Sailors
The Brave Captains
Hazard's Command
Hazard of Huntress
Hazard in Circassia
Victory at Sebastopol
Guns to the Far East
Escape from Hell

BY
C.N. P
ARKINSON
The Guernseyman
Devil to Pay
The Fireship
Touch and Go
So Near So Far
Dead Reckoning
The Life and Times of Horatio Hornblower 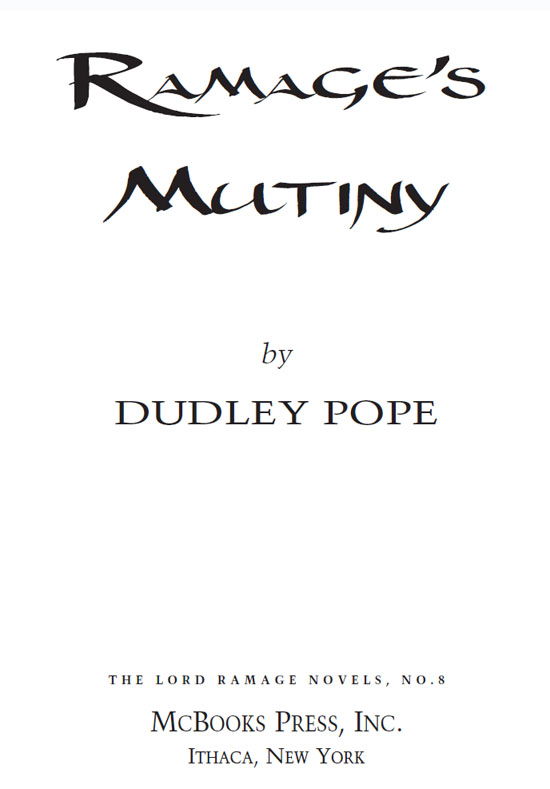 All rights reserved, including the right to reproduce this book or any portion thereof in any form or by any means, electronic or mechanical, without the written permission of the publisher. Requests for such permissions should be addressed to McBooks Press, Inc., ID Booth Building, 520 North Meadow St., Ithaca, NY 14850.

The paperback edition of this title was cataloged as:
Library of Congress Cataloging-in-Publication Data

To my cousin
Dorothy Pope
with love

W
ITH one exception, all the places mentioned in this story exist. The traveller will, however, look in vain for Santa Cruz on the Spanish Main. The student of naval history will be reminded of the tragedy of the
Hermione
â¦ 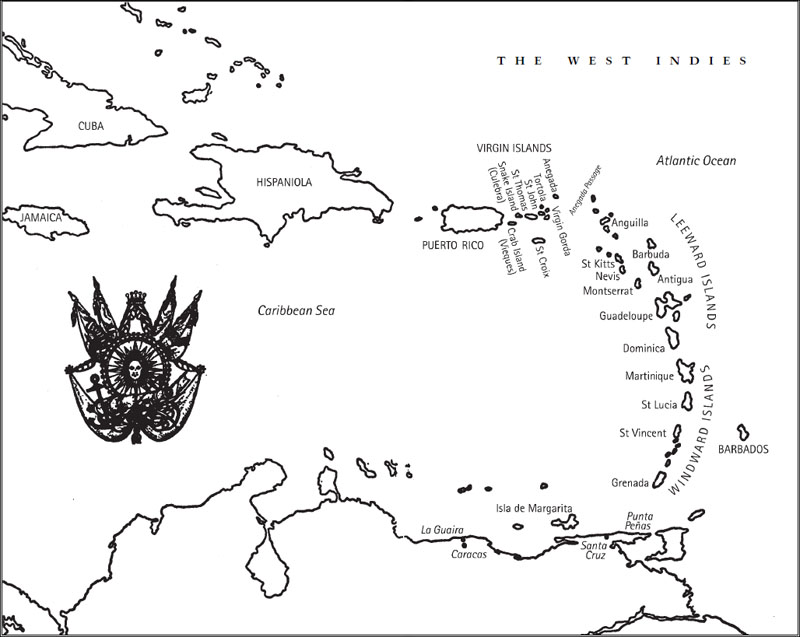 T
HE LITTLE dockyard at English Harbour was already bustling, although the sun was only just lifting over the rounded hills to the east. In the West Indies the day began at dawn so that men could do as much heavy work as possible before the sun began to scorch the energy from their bodies.

Ramage eased himself into the rattan chair on the balcony of the Commander-in-Chief's house, glancing down warily as protesting creaks warned that termites were busily and silently chewing their way through the legs to convert the springy wood into little piles of brown powder.

As he relaxed to wait for the Admiral he guessed that today Captain Ramage was far from popular with the dockyard staff. They were all well paid and provided with comfortable houses, and normally enjoyed a quiet life interrupted only twice or three times a year when a frigate came in for a self-refit, using her own seamen to do the work and relying on the dockyard staff for little more than interference.

Now, however, the master shipwright, master attendant, storekeeper and bosun suddenly found themselves responsible for two former French frigates, seven merchantmen and a schooner, all brought into Antigua as Captain Ramage's prizes.

They had orders from the Admiral to help commission one of the frigates within seven days, while the otherâwhich needed careening for repair to her bottomâhad to be ready within three weeks because she was to escort the merchant ships to England. Not only that, but the Admiral was here to make sure the work was completed on time.

Although the Admiral was harrying the dockyard staff without mercy, Ramage had little sympathy for them. They had settled into a way of life where rum was an important part of the day's ritual. While some heathens stopped work at sunrise and sunset and knelt facing the east to say prayers, these dockyard fellows rarely started work but frequently interrupted their leisure to reach for a bottle and top up their glasses.

Ramage had little doubt that a sudden inventory of the dockyard would reveal that they, in combination with the storekeeper, were running a prosperous but illicit business turning the King's stores into ready money, selling rope, sail canvas and paint to merchant ships calling at St John's, the main harbour on the north-western side of Antigua.

Few masters worried about breaking the law and having rope on board that had the “King's Yarn” in it, a coloured thread that showed it had been laid up in one of the Navy's ropewalks and issued only to Navy ships. Most of the rigging in a merchant ship took a coat of Stockholm tar to help preserve it, and that hid the “King's Yarn.”

There was corruption in every dockyard and English Harbour was probably no worse than the rest. Because it was small, however, the flaws were more obvious. It comprised only a few stone buildings with grey slate roofs and reminded Ramage of a fifteen-horse stable on the fringe of Newmarket Heath. But what it lacked in size and honesty it made up for in sheer beauty.

It was built at the inner end of a narrow channel which twisted its way like a fjord between ridges of steep hills. The entrance was hard to find and most captains coming in for the first time were thankful for the fortifications on each side, Fort Barclay and the Horseshoe Battery, because the channel did a sharp turn and from seaward there was no hint that ten ships of the line and half a dozen frigates could be safely moored inside, sheltered by the hills from the brisk Trade winds and with cables from their sterns secured to permanent anchors dug in along the beach.

Ramage saw smoke across the channel, beyond the careening wharf, and a few minutes later smelled the sharp tang of hot pitch as seamen stoked up the fire under one of the big cast-iron pitch kettles standing waist-high on a small point, well clear of ships and buildings in case they became overheated and burst into flames. Nearby one of the French frigates,
La ComÃ¨te,
was already hove-down at the CarÃ©nage Wharf, lying almost on her side like a stranded whale, with several sheets of copper sheathing missing along the rounded turn of the bilge and showing black stripes where carpenters and their mates were perched on a small raft, busy removing damaged planking.

Ramage reflected that barely two weeks ago off Martinique that frigate was doing her best to sink the
Juno
frigate, which he then commanded. Now she was a prize and instead of being dead or a prisoner he was sitting on the balcony of the Commander-in-Chief's house waiting for orders. These would concern the second French frigate, now anchored farther up the channel in Freeman's Bay. She was the
Surcouf,
which he had cut out of Fort Royal, and which would be his new command as soon as all the paperwork was completed; one of the fastest and most heavily armed frigates in the Caribbean, and certainly the loveliest: the French had a knack of building graceful ships.