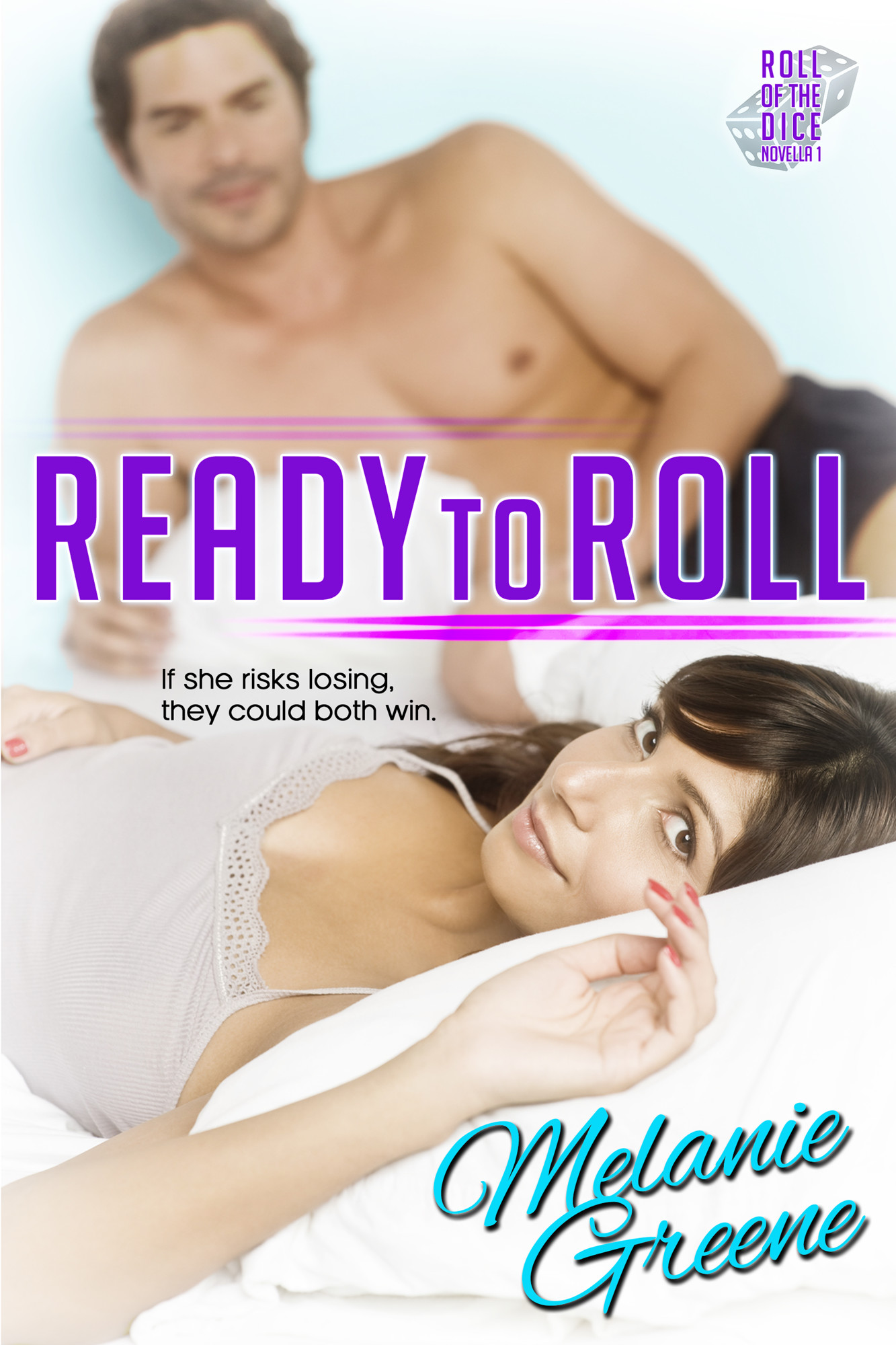 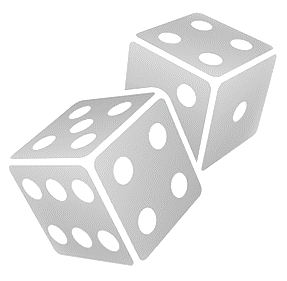 A Roll of the Dice novella

This one’s for you, Mom.

Janice bounced on the balls of her feet
.

Right there on Miguel’s front stoop, she found herself in a perfect kickboxing front stance, arms up in guard position. Nerves jangling from head to toe. So she shot her fists out for a few quick hooks, one-two-three, except she’d forgotten about the dang flowers in her left hand. As ‘two’ ended and her right wrist straightened for ‘three,’ she slapped herself in the face with the tulips.

“Fuck a duck,” she muttered, examining the bouquet. What normal, sane, competent-at-life woman brought tulips to her date, anyway? But she didn’t drink wine, and he was cooking for her. Janice’s mama, despite repeated lectures, hadn’t taught Janice a ton of mannerly things, but not showing up empty handed when someone cooked for you was an inviolable rule.

So she was nervous, so what? It wasn’t like Miguel had given her a lot of notice. And she’d had to skip her bike ride so she could scoot home and get ready, putting on a fresh shirt--her jeans weren’t too mucky after a day in the warehouse, and it wasn’t like she was going to put on her one skirt. Which left her to pick between jeans and workout gear, and again, even Janice had to concede Mama would be rightfully aghast if she showed up at her coworker’s door in spandex.

Then she’d spent forever talking herself into the tulips, and all in all she hadn’t had time for any kind of workout at all between the office and pulling her car onto Miguel’s crushed-shell driveway.

Not that she’d been waiting on him to ask her back.

The invite was almost out of the blue late that afternoon. They’d just sent the dock crew home after unloading the day’s last shipment, and when he pulled her aside she thought it was to go over Monday’s schedule. Instead he told her to skip going to Eddie’s monthly burger night in favor of showing up at his place for dinner. Just the two of them.

She’d hardly known what to say.

“I’m making you steak tacos with my Hatch chili salsa. And you’re going to love them. And it’s just going to be the two of us.”

And fortunately a vendor had called then to schedule the plotter maintenance, so Miguel had taken off, and Janice hadn’t had to answer. Not that he’d asked. Just told her what to do. And like a Santa Gertrudis moving from pasture to pen, she’d gone and allowed herself to be herded right to his front door.

Clever vaquero that Miguel was, he didn’t wait for her to knock. The pine green door opened, and there he was, drawing her into his stark entry, with its beige walls and bleached wood floor and a huge corn plant in a big brown pot. “Hey, welcome,” he was saying, and Janice was looking at his bright crooked smile and the way the skin at his throat gleamed against his clean white shirt and wondering when she’d gotten familiar enough with his wardrobe to recognize that the jeans he wore now were different from the jeans he’d worn that day at work.

He was talking but all the visual info was somehow short-circuiting Janice’s ears. And Miguel was wearing some kind of cologne, something that was stronger when he leaned at her. Not an aftershave; he hadn’t shaved, and had she ever seen his dark stubble up close before? And then she was slapping the tulips against his chest when she meant to be just handing them over, but it wasn’t her fault. He’d gotten too close. If he’d stood still, she’d have just handed him the flowers politely like a gal with actual manners and some awareness of how to operate in a non-work, non-gym situation. But he’d leaned closer, and the tulips were smushed against his chest, and it didn’t stop him.

He moved even closer. And Miguel wasn’t super tall but Janice was short and Miguel had shoulders that could take on the weight of the world and Janice could bench her own weight but Miguel was pulling her forward, hands on her waist, like she had no strength at all, and her arms were still up, elbows tucked in, so before she knew it Janice’s forearms rested on his pecs, flowers smushed between them, and Miguel kept her there, tight against him, and his crooked smile straightened out and it wasn’t two seconds later than he was kissing her cheek, soft but not short.

She didn’t mean to sink against him. Normally she had more control of her body than that.

He kissed her other cheek. Very courtly.

And then Janice sneezed.

Her head ricocheted off his clavicle, she dropped the damn tulips, and then she stepped on them when she stumbled back out of Miguel’s hold. Or almost out of his hold, since he caught her right when she was slipping on the waxy petals and about to plant her tailbone on his hardwoods.

And then he kissed her again. He didn’t telegraph it all, didn’t give her a moment to prepare. Just moved, and was kissing her. She was grinding flower petals into his floor and one hand was pressed between them, twisted backwards so she was practically groping her own meager breast, and one of his hands circled her bicep, and the other… The other! Miguel’s other arm was a vise around her waist and the hand was anchoring her pelvis so Janice’s entire body was wedged against his. It should have been uncomfortable, being literally off-balance and with her limbs turned every which way like she’d lost all semblance of control over them. Which maybe she had. But it wasn’t uncomfortable.

Which sure as shit made Janice uncomfortable.

His handsome face that was like coming home, familiar and welcoming. His elegant, eloquent eyebrows. His full lips, smooth and firm, and not in the least tentative against hers. It all made her uncomfortable.

Janice’s nerves were squirming up and down her body like freshly hatched tadpoles. It wasn’t right, this feeling so right when she was fighting off another sneeze and her hand was cramping up against her aching breast and her pelvis was hosting a congregation of little tadpoles. They were squirming like mad down there.

And Miguel stopped kissing her, and then Janice was really, really uncomfortable.

Carefully, this time, she backed up a step, leaving the flowers and their pollen in an allergenic mess on the floor. It was kinda pretty, actually, the green and yellow and orange all mixed together. Gave a touch of color to the otherwise brown and white and beige space. She should throw flowers at his feet more often.

“Hey yourself,” Janice answered in a voice that borrowed a little from the tiny frogs developing hoppity legs throughout her system.

“Yes, I can see how important color is to you.” Janice meant to sound a touch snarkier, but she was distracted by noticing that they’d sidestepped the floral mess and were up against each other again.

“You don’t like my decor?” He took her hand, and Janice looked at it, at the two of them intertwined. His fingers were twice as long as hers, or twice as warm, or twice as broad. Twice as something. Something that made it make sense for her to feel overwhelmed but also comfortable, the pollywogs settling down at last.

Five years they’d worked together, and never once held hands.

Suddenly Janice’s froglets were hopping again, and she pulled away. “I should clear those up.” She turned and did notice, then, that his living room rug was the same orange as the crushed tulips, and that his whole house was neat as a pin. It was a classic shotgun house, front door opening onto the living area with a galley kitchen beyond. So Janice knew exactly where to go to find a trash can for the mangled bouquet.

Somehow she was carrying the tulips a little further, though, past the kitchen. The whole deal with shotgun houses was that you could open the front and back doors and fire a shotgun and the bullet would go straight out to the back fence. Though the fact that you could also open both doors for a steady air current in the depths of a Texas summer was more the point, generally.

And also, if you walked past the kitchen towards the back door, you ended up staring into the bedroom.

Staring, and thinking brilliant thoughts like, “Miguel has a bed.”

Lord love a fool, of course the man had a bed. People generally did, if they also had roofs over their heads. Nothing so remarkable about having a bed, or about that bed being neatly made up, or about beige and brown plaid blankets, or about pillows covered in soft white cotton. Janice’s hovering mental mother smacked her upside the head. Miguel hadn’t invited her over to stare at his sheets.

Flowers. She was trying to get rid of the thrice-cursed flowers.

Turning back towards the kitchen, she caught Miguel not even trying to pretend he wasn’t laughing at how flustered she was. He did open the cabinet under his sink and gesture to the trash can there with a little flourish. Like she couldn’t have figured that out her own damn self. If his bed hadn’t leapt out and distracted her and all.

“We’re not at work, Janice. I think you can remember the name of the only other person in the room. Call me Miguel.”

Oh, he was going to be like that, was he? All soft chiding but firm intent? Well, fine. Janice could fight on those terms as well as any other. She might not take verbal sparring classes like she did kickboxing and Taekwondo, but she knew plenty about mouthing off. Just ask her mama.

Skin I'm in, The by Flake, Sharon
Divide by Russo, Jessa
Imperial Stars 2-Republic and Empire by Jerry Pournelle
A Mighty Purpose by Adam Fifield
Mimir's Well (The Oracles of Kurnugi Book 3) by Martinez, Gama Ray
Sea of Death by Gary Gygax
Thirst by Ken Kalfus
1.4 by Mike A. Lancaster
The Nature of Alexander by Mary Renault
The City on the Edge of Forever by Harlan Ellison