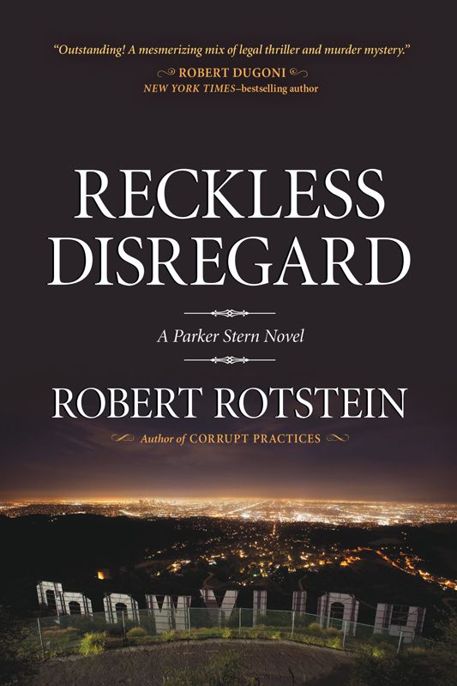 Published 2014 by Seventh Street Books®, an imprint of Prometheus Books

Reckless Disregard.
Copyright © 2014 by Robert Rotstein. All rights reserved. No part of this publication may be reproduced, stored in a retrieval system, or transmitted in any form or by any means, digital, electronic, mechanical, photocopying, recording, or otherwise, or conveyed via the Internet or a website without prior written permission of the publisher, except in the case of brief quotations embodied in critical articles and reviews.

The characters, organizations, companies, products, and events in this book are fictitious. Any similarity to real persons, living or dead, or organizations or companies, currently or previously existing, or existing product names is coincidental and is not intended by the author.

The intro drags on too long, but everything else about the game is perfect. The woman is sexy, especially to a ten-year-old boy like Brighton. There are 3D anime-style graphics and an awesome metal-rock soundtrack. It’s another soon-to-be classic video game by the developer known as Poniard.

What Brighton especially loves about
Abduction!
is how hard it plays. No super-easy, easy, or intermediate stages. Just one mode, tagged
Unattainable
. Leave it to Poniard to disrespect his audience by branding them losers. And what better way to attract their attention?
Abduction!
has already gone viral. According to the gamer blogs, no one has beaten the game yet, though it’s already been out for three days. That’s a long time—usually the top experts crack a new game in a couple of hours. Some bloggers write that there’s no solution even though Poniard has promised there is. Brighton doesn’t really expect to beat the game, but why not try?

He dims the monitor and goes down the hall to check on his aunt, who’s really his great-aunt. She’s in the living room, still snoring away, asleep in her ratty armchair. A cooking show is on TV, the emcee loud and energetic. An empty bottle of sauvignon blanc teeters on the edge of an end table. Several times a month, Aunt Greta drinks too much wine, letting Brighton steal a few hours of freedom. Aunt Greta doesn’t approve of computer games or much of anything else that’s fun.

He goes back to his bedroom, powers on the monitor, and starts
Abduction!
from the beginning. The game, like all of Poniard’s offerings, starts with a short burst of classical music. Brighton read online that this music is a goof on the major studios’ old-fashioned fanfares. The game itself opens with a long shot on a neon sign that says
The Tell Tale Bar
, the
B
flickering on and off. The scene quickly shifts to an empty bar, dark and dingy. There are footsteps, and the hot woman, visible from the neck down, struts in. She’s wearing a green leather jumpsuit, the neckline plunging to just above the navel, exposing a lot of breast. Her back toward the screen, she sits down on a bar stool, swivels toward the camera, and with flair scissors her legs before crossing them. Her hair, the color of animated fire, is styled in dreadlocks that fall to mid-back. Her skin is fair and freckled. Around her neck, she wears a silver chain, to which a small cross is attached.

“I’m Felicity, and this is my story.” Her voice is singsong, kind of like a canary. “It’s a story of love and betrayal. And blood. My blood.” With her head still facing the viewer, she turns her body sideways and rests her right forearm on the bar, her green eyes narrowing to sultry slits. “Did you ever get lost? So lost you can’t find your way out of the darkness? I did. One day when . . .” She sits up with a start, places an index finger to her lower lip, and shakes her head vigorously, each computer-generated dreadlock swaying in perfect rhythm to her movements. Nobody but Poniard can make a game seem so real.

“That’s
so
wrong,” she says in her fluty voice. “That’s what they want you to think. But it’s a lie. I didn’t get lost at all. I was taken. Abducted by William the Conqueror and his band of thugs. You see, in this game, you not only know what the crime was, you know who committed it. But this game’s not over, it’s just beginning. All
you
have to do is find out how it all happened. Easy, huh? Hardly. An unattainable goal, because you can’t rescue me. But there’s an answer to what happened to me, I assure you. Let me show you something.”

She swivels to face the bar and raises an arm toward the wall. When she snaps her fingers, a big-screen television lights up, displaying a view of the same bar, this time crowded with patrons. The picture zooms in, and the images on the TV and the computer screen merge.

Brighton pauses the video and checks the time. A few minutes after eight. He listens. Another Food Network cooking show. Aunt Greta must still be asleep, because at eight on Mondays she always watches that show with the celebrity dancers. Safe for now, he rewinds the game to get another look at Felicity’s boobs and then advances to the next cutscene.

Felicity sits in a booth alone, sipping a glass of amber liquid. Everything in the scene is old-fashioned. Felicity’s hair, auburn now, is piled on top of her head. She wears a black jacket over a tight black dress. The scene starts with a classic rock song.
Money for Nothing
. He knows from an Internet search that the song, by a band called
Dire Straits
, came out in 1985. So the
Abduction!
story must have happened in the eighties, a clue. One of the things that make Poniard’s games so hard to beat is that you often have to get outside knowledge to advance from level to level.

Felicity gulps down her drink and slams it on the table with a cartoonish clatter. Immediately, the bartender, a tiny man with a mullet, thin face, and rattish moustache, walks out from behind the bar and brings her another.

She continues to stare straight ahead. “Thanks, Dexter.” She slurs the words.

“This has to be the last one, Felicity,” the bartender says in a squeaky voice that clacks at the end of each sentence. “And I shouldn’t say this, but Billy’s not coming. He’s too much the all-powerful pooh-bah to come into a place like this anymore.”

She shrieks, her laugh all the more frightening because Poniard increases the decibel level for the sound effect. Brighton flinches every time he hears it.

The bartender shakes his head and clears the empty glass. When he turns to the side, his overlong apron string resembles a rat’s tail. Poniard is really playing the rodent card with this character. Over the next minute, a succession of men approach Felicity. Each time, she shakes her head and they leave.

Two goons in identical suits sit down on each side of the booth, one blocking Felicity from leaving. Slasher film music starts playing. Brighton knows this because he secretly watched
Saw
on TV one night when Aunt Greta fell asleep. The man who sits next to Felicity is tall and burly; the one who sits across from her is short and slim. Both men are white. They have the same exaggerated kinky hair—buzz cut on the sides and absurdly high and cylindrical on top.

“Well, if it isn’t George and Lennie,” Felicity says.

“If you think I’m going anywhere with you, you’re dumber than I thought. Now get out of my way, Einstein.” She makes a move to get up, but the hulk puts his hand on her shoulder and pushes her down again. Her scarlet lips open in a newborn scream, but then there’s an old-fashioned iris-in like from a silent movie, the click of a switchblade, and a starburst gleam on metal. The big man touches the pointed blade just below her left breast. Her hardened nipples poke through her dress. Aunt Greta hates Poniard’s video games because she says they have too much sex and violence.

“Shut up,” the small man says.

They stand up, making their way through the crowd of tough guys and skanky girls. The bar is filled with cigarette smoke and the sounds of loud laughter and clinking dishes. The scene shifts outdoors, skid row at nighttime, the street empty except for a homeless man—drunk, asleep, or both—curled up in the alcove of a building. Then the scene cuts to the beach, where the men drag a struggling Felicity across the sand toward the black ocean. Halfway across the beach, she loses one of her gold high-heel shoes. They half-carry her down to a motorboat tied to a pylon on the pier. Her shoulders slump, and her body caves into itself. Literally. That’s the beauty of animation—no live actor could do that.

Just as she’s about to step into the boat, she turns and raises her hands. Her black-polished nails extend from her fingers, and she makes a catlike swipe at the big man’s eyes, hitting the mark. Blood showers down from his face, a dark red. He bellows and falls to his knees, grabbing at her as he goes down. His fingers catch in her silver chain, which breaks and falls to the sand. She runs, but the small man catches up to her and pushes her against a slimy concrete pylon. Her head hits the pylon with a sickening thwack. The blood from her head spurts out like fiery streamers from a skyrocket. Her eyes widen and fade. The picture goes dark except for the fountain of scarlet droplets that continue to cascade down the screen.