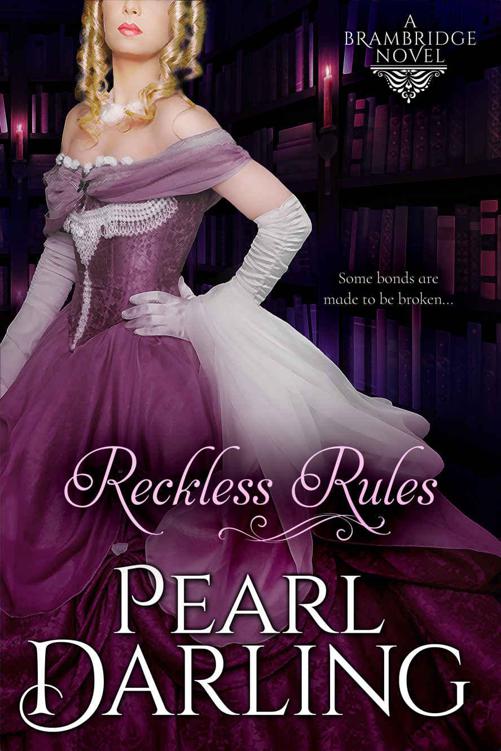 Pearl Darling is the author of The Brambridge Novels, a series of romantic suspense books that each feature a potent combination of passion and mystery set within the dazzling regency period.

Each of the titles can be read as a standalone, but for those that follow the entire series, each book will provide new information about the mysterious thread that ties the central figures of the Brambridge Novels together.

And which hero and heroine will be the last to fall to love’s seductive touch? Follow the series to its inevitable conclusion to find out.

All characters and events in this publication, other than those clearly in the public domain, are fictitious and any resemblance to real persons, living or dead is purely coincidental.

All rights reserved. No part of this publication may be reproduced, stored in a retrieval system, or transmitted in any form or by any means, without the prior permission in writing of the publisher. The only exception is brief quotations in printed reviews.

Cover design by Kim Killion at The Killion Group Inc.

Three dark portraits gazed down forbiddingly at Lady Victoria Colchester as she escorted her elderly husband into the hall and onto a small, rigid backed chair. The sound of the other guests’ voices receded slowly as the door to the dining room shut softly behind them.

Immediately, Lord Colchester straightened and stood, wincing as the bones in his neck cracked audibly.

“I do wish they wouldn’t make us sit for so many courses.” He rubbed his back with wrinkled hands. “We’re only here for one thing, and that is certainly not for their company.”

Victoria nodded. When her husband was in this kind of mood, it was best to agree with him. She moved to a mirror that hung in an alcove and with practiced fingers, swept back the large golden curls that framed her porcelain face. She froze as her husband’s face appeared in the mirror behind her, and his lined cheeks creased further as he smiled and ran a finger down her chin.

“So beautiful. Who would ever have thought that your perfection would hide such a talent?” He coughed hoarsely and dropped his arm to his side. “What did they do?”

“Excellent. Just what I suspected. I had a job to keep Lord Vanderguard engaged. The man is a positive bore. It’s lucky I have Arturo and Ponzi otherwise I would know nothing about dogs or their mating habits.”

“Hmm, yes.” Arturo and Ponzi were the only creatures that Lord Colchester doted on; he certainly made no time for his wife.

He sat back down on the chair, wheezing in and out for several seconds in an act that Victoria had seen many times before. When at last his color was an abnormally heightened red, she glided to his side and presented her arm. With groping hands, the elderly man pulled himself up to lean against her. Careful to keep her face blank, Victoria turned away from the fetid breath that ruffled against her cheek.

Lord Colchester gave a hoarse laugh. “Just be thankful, young gel, that you beat me at that game of chess on our wedding night. Otherwise you would have experienced worse than my bad breath.” He pulled at her arm impatiently. “Come on. We need to make our excuses to Lord Colthaven and the others so that I can go home and write up what I’ve learnt, in the book.” He stopped suddenly and his dry, papery lips brushed her ear lobe.

“What is the tenth rule of investigation?” he whispered.

“Record and remember,” she said promptly, fighting the urge to bring up her free hand and push him away.

“Ha, yes.” Lord Colchester leaned back on her arm and took a step forward. “Record and remember. You might never know when you need to use the information again at a future opportunity.”

Victoria nodded, trembling slightly as the weight of her husband suddenly hung heavily on her arm. “My lord, let us go and make our excuses, so that you can write down what you have learned.”
What I have learned. Why ever did I consent to marry the man?

Lord Colchester nodded. With short steps, Victoria led him back into the dining room.

Despite their standing in the ton, they were accorded the briefest of goodbyes. It was obvious from the expressions of the other guests that old Lord Colchester and his very young beautiful wife were not well liked. Victoria continued to support her husband back through the hall and out of the front door to the sumptuous, black carriage that stood waiting. As the large front door closed behind them, Lord Colchester stood straight, rolling his neck, and coughed into to his hand.

Victoria fumbled in her pelisse and drew out a small white handkerchief for him. He spat into it and handed it back. Keeping her face carefully blank, Victoria folded the edges of the handkerchief together and pushed it back in her bag as Lord Colchester stared out into the night.

“Don’t think I don’t see how my habits revolt you, child,” he said quietly.

Victoria swallowed, her mouth suddenly dry. “No, my lord…”

Lord Colchester sighed. “You are an excellent liar, my dear, as well as an investigative genius. But I know you too well. I have made you my protégé.
You
have been my hobby over the last two years. Just as you have made investigation
your
hobby in the hope that it will keep me away from you.”

Victoria took a step forward towards the carriage. She did not want to continue this conversation. Her husband, a controlling man, was too perceptive. Perhaps if he could not see her face, he would not know her thoughts. “Lah, my lord—” she infused a gay quality to her voice—“what nonsense you speak. I have never refused your advances.”

“No, but…” Lord Colchester stopped and gasped as a small cab rocked their carriage as it careered past. Victoria looked up sharply, catching a glimpse of a large moon face staring out at them from the open cab window.

“It can’t be.” Lord Colchester gasped again. He clutched at his chest and moaned. “But… he should be in Spain…”

As much as Victoria wanted to leave her husband on the steps, she knew that the coachman and his assistant were watching, part of the well trained house staff, all spies in the lord’s employ. She dropped all pretense of sweetness and rushed to his side. Was it an act? Was this yet another perverse game her husband was playing to remind her who was in control?

But Lord Colchester continued to moan and grapple at his chest. “Get me into the carriage and back to Upper Brook Street. Hurry.” His arms clutched at Victoria.

Victoria called softly to the coachman and his assistant. They ran up the steps and took the stricken man under his arms and legs. Getting into the carriage, she directed them to lift him in, laying his head on her lap. His eyes stared straight up at her, his pupils large, the whites of his eyes visible as he strained for breath.

She pushed a cushion beneath his thinning hair and drummed a tattoo on his temples with her long fingers—something he often demanded late at night after he had finished entering more information into his secret book.

Jerkily he lifted a rigid arm and, batting her fingers away with one wild swing, continued to stare at her. Victoria clenched her fingers in a fist and held his gaze.

“If only I had met you when I was younger,” he gasped through ragged breaths, “before… before…”

Victoria held her breath and bent her head lower and to the side. His voice faded as he mumbled. Lowering her head even further, she jumped as he grabbed her face and pulled it round to stare into his eyes again.

“Find my book before the house staff do. I thought he might be dead, but he isn’t.” Lord Colchester’s grip weakened on her neck. “Page thirty-one has all the information. He will come for you. Be prep—“

Lord Colchester’s eyes bulged, and he gargled as he thrashed his head from side to side. Victoria fumbled in her pelisse for the dirty handkerchief from earlier as liquid from his mouth spattered her face. Opening up the handkerchief, she stared at the previously bright white linen. The dim flame of the interior carriage light lit the dark red blood that stained it. She raised a trembling finger to her face and wiped at the wet spots that covered her temple. Her fingers came away redder than cochineal.

As quickly as it had begun, Lord Colchester’s thrashing stopped. He stared sightlessly at the ceiling of the carriage. Victoria leaned over him, her breath shallow, jerking away as his body slumped against her. The carriage was silent as she held her breath. With the tip of her forefinger, she tipped his chin towards her and swallowed. His eyes were glassy and fixed, his forehead permanently creased in fear. Blood trickled from the corner of his mouth onto her dress.

For fifteen minutes Victoria gazed into the sightless eyes. As the carriage wheels thumped slightly against a pavement, she straightened and looked through the window. They had entered Upper Brook Street and would shortly be at the house.

She opened her pelisse and, with a short sharp movement, pulled up her sleeve and jammed the pelisse clasp onto the tender underside of her arm. She gasped and tears rose swiftly to her eyes as the sharp metal broke her skin. She let them come as she hadn’t done for two years. As the drops rolled down her nose and landed on the taut face of Lord Colchester, Victoria wiped at the blood on her forehead, smearing it into her hair.

She counted to five, watching the houses roll by. Two villas before Colchester Mansions she let out a scream.

The carriage came to an abrupt halt, the horses screaming as the coachman pulled them up hard. A light thud resounded in the quiet street as the coachman jumped off his perch.

The coachman opened the door to the carriage and took a step back. Victoria raised her blood and tearstained face to his.

“My beloved Colchester,” she said brokenly. “Your master…” She pressed her bloodstained fingers to the creamy whiteness of her breast and watched as the coachman’s face remained riveted on the bloody handprint she left on her skin. “He’s dead.”

The September sun blazed down on the Devon headland above Longman’s Cove with the ferocity of late Summer heat. Victoria leant back against the sloping side of the barrow hewn into the top of the cliffs and gave a contented sigh, leaning her head to one side to capture just enough rays to keep warm, but not enough to tint her complexion.

Closing her eyelids slightly, she studied the man that sat next to her, propped on his elbow, his large tailored coat spread out behind him. William Standish, Bill to all that knew him, sat seemingly unaware of her gaze, taking great bites out of an apple that had come from the Brambridge Manor Orchard. His whole body was involved in the act, from his long fingers and enormous shoulders, to his well-formed thighs; each muscle pulling tight, straining against his clothes as he raised the apple to his face.

Strings by Kendall Grey
Miles From Kara by Melissa West
The Clothes They Stood Up In by Alan Bennett
Justice Incarnate by Regan Black
Throne of Stars by David Weber, John Ringo
Too Wicked to Tame by Jordan, Sophie
Cord SEAL Team Seven (Book 5) by Jordan Silver
Haldred Chronicles: Alyssa by JG Cully
Alive by Scott Sigler
The Graves of Plague Canyon (The Downwinders Book 3) by Michael Richan