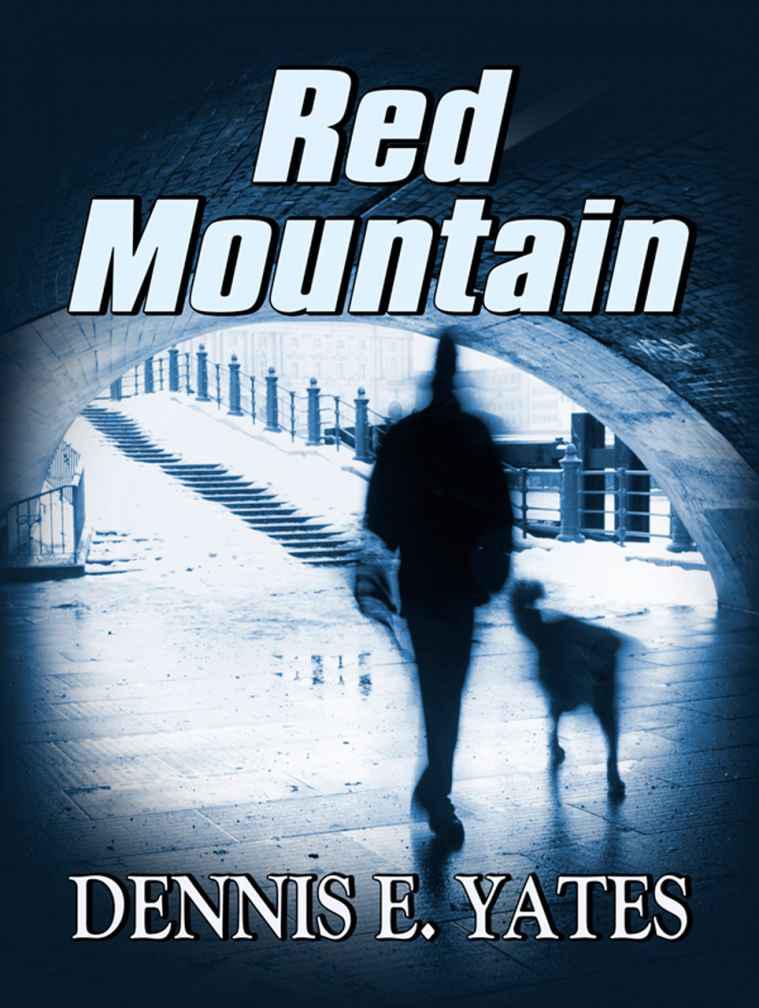 This book is a work of fiction. Names, characters, places and incidents are either the product of the author’s imagination or are used fictitiously. Any resemblance to actual persons, living or dead, or to actual events or locales is entirely coincidental.

This eBook is licensed for your personal enjoyment only. This eBook may not be re-sold or given away to other people. If you’re reading this eBook and did not purchase it, or it was not purchased for your use only, then you should return it and purchase your own copy. Thank you for respecting the hard work of the author.

Copyright © 2011
Dennis Yates
. All rights reserved, including the right to reproduce this book, or portions thereof, in any form. No part of this text may be reproduced, transmitted, downloaded, decompiled, reverse engineered, or stored in or introduced into any information storage and retrieval system, in any form or by any means, whether electronic or mechanical without the express written permission of the author. The scanning, uploading, and distribution of this book via the Internet or via any other means without the permission of the publisher is illegal and punishable by law. Please purchase only authorized electronic editions and do not participate in or encourage electronic piracy of copyrighted materials.

Copyright © istockphoto #15115600 Silhouette of man with dog, who goes through a tunnel

The room tilted back and forth, as if he were in the damaged hull of a ship taking on black seawater. Robert swayed in and out of consciousness as his body drifted into shock.

He dropped his head to the side and stared beneath the family room couch. At the moment it felt as if his whole life was summarized in the objects collected there since the last time they’d moved furniture—a world of lost or forgotten things, pushed beyond the reach of any halfhearted search of the hand. Among the dust bunnies Robert could make out the contours of Connor’s old baseball mitt, some rubber dinosaurs and pieces of ancient Halloween candy. There were also Peggy’s Christmas catalogues, Nugget’s old dog brush and a chewed leather slipper that had gone missing over a year ago.

Men he didn’t know where ransacking his house. He heard their heavy footfalls thundering up and down the hall, dresser drawers being thrown open and the squeal of rarely used closet doors he’d always meant to oil. He turned his head back to the thing pinning him to the floor and forced his eyes to refocus.

A dark figure towered above, pressing a boot into his sternum. Robert had attempted to squirm out from under it, but he was too weak now to try again. It hurt too much to breathe. He squinted up at the eye-slits of a ski mask.

“My family... What have you done to my family?”

Thin lips protruded from the mask’s mouth hole in a twisted smile. The boot punched down hard and knocked the remaining air from his lungs, causing another wave of pain to rip across his body.

“He’s coming out of it!” shouted the mask.

“Take whatever you want,” Robert begged, his voice sounding thin and bronchial. He’d heard something pop in his chest. A wet and bloody sound. “But please don’t hurt them.”

The mask burst with laughter, the kind of laugh Robert associated with men who smoked and drank a lot.

“If you want money, I can take you to the bank first thing tomorrow. There’s not much there, but it’s something. We can do this the easy way. Nobody has to get hurt.”

“Shut up,” ordered the mask.

Robert’s strength was gone. He was at their mercy and they knew it. All he could do now was hope his family would survive.

If it hadn’t been for the car accident, things might have turned out differently. Nugget would have been home to warn him of the home invasion and he would have had a fighting chance. But Nugget was spending the night at the vet’s. She’d been riding in the car too and had hit her head on the dash. Robert, who’d been taking painkillers for his hurt shoulder, had fallen asleep on the couch while watching television. The fifty-two inch television he’d bought at an Independence Day sale last year was now a burst eye of broken glass. Acrid smoke curled out of the blackened socket and hung near the ceiling where it left a charred mark. Robert had thrown one of his attackers into it.

He thought about Peggy’s and Connor’s screams coming from the back bedrooms, of how a primal lightning deep inside him had flashed through his arms and legs. He’d punched and kicked and broken bones. But there were just too many of them, and when they’d finally managed to pin him to the floor and beat him senseless he’d held onto the location of his family’s cries as long as he could…

He closed his eyes and strained to listen. He could no longer hear any signs of his wife and child in the house. Had they killed them? The thought tore at his insides. He had no idea how long he’d passed out. Except that when he came to again, the house felt empty. His family was gone... They’d either killed them or taken them away somewhere. When he opened his eyes again an indifferent moonlight was shining through the slider door.

“What have you done?” Robert asked again. There were two of them now, grinning through mouth slits.

The one not standing on his chest bent down next to him and took his arm. He heard the snap of surgical tubing and suddenly his bicep went numb. When he lifted his head he saw a needle sinking into his flesh. There was a brilliant burst of light throughout his body, followed by the sensation of sinking to the bottom of a very warm sea.

All pain was washed away like a bad tide. He’d been fighting back all this time and now his will was no longer his…

While he glided down into darkness, Robert heard the dope shooter’s silky voice echoing to him from somewhere above.

“We will soon be contacting you with instructions, Mr. Crain. And please, don’t call the police. It will only make things very messy.”

Even as terrible as it sounded, those words were like a heavy treasure that pulled him down faster. In the final moments before he was engulfed by oblivion, Robert was certain his family was still be alive.

Robert awoke with the sun beating on his face through the slider. He ached all over, had no immediate memory of the night before. He thought maybe he’d passed out on the couch and rolled onto the floor in his sleep. When he sat up he saw the overturned shelves and broken furniture. He brushed his cheek and bits of ground glass and dried blood came off on his hand. His head lobbed back and forth, swollen and bruised.

What the hell happened? Did I sleep through an earthquake?

“Peggy!” he called out in panic. He grabbed the edge of an overturned couch and pulled himself up. His legs were shaky, and the carpet sucked at his feet like wet sand. He wondered if the pain pills he’d taken were kicking his ass. But that can’t be possible. They’d have worn off by now...

He hobbled through the house, staring at the damage, feeling as if he was in one of those nightmares that you can’t seem to wake from.

He checked their bedroom, but there was no sign of her. Clothes and papers and broken glass littered the floor. If Peggy had left a message, he was unable to find it.

What the hell has happened to everyone?

By the time Robert reached Connor’s room, the floodgates had broken inside. Memories from the night before suddenly flowed through his head, blood-washed images of grinning ski masks and hypodermic needles.

Robert fell onto his son’s bed and cried. He remembered Peggy and Connor screaming for help. But he’d been too busy fighting off attackers of his own. And now his family was gone…

I didn’t protect you. I did everything I could but I still failed.

He buried his face into his son’s pillow. His nose was clogged with dried blood and he could barely smell the sweet scent of his son’s hair, the baby shampoo and the pine trees he loved to climb in their backyard.

We were supposed to go to a movie today. Just you and me buddy. While mom went to lunch with some old friends…

A phone rang down the hall. After a few moments Roberts sat up, remembering there was something important he had to do. He ran down the hall as fast as he could, stumbling into walls and tripping over a pile of coats still on their hangers.

He closed his eyes and picked up the phone, concentrating as hard as he could to remain focused. He leaned against the wall to stop his head from spinning.

A television blared in the background, a football game maybe... Then the voice of a man Robert didn’t recognize.

“Where are they?” Robert said. He tried picturing what the person on the other end looked like. The voice was casual, edged with glee.

“Of course I can’t tell you where they are. But they are safe Mr. Crain. You really do have an attractive family by the way.”

The man laughed easily, as if he and Robert were sitting at a bar trading dirty jokes. Robert imagined a sun-damaged face, a dark polyester blend suit and rotting cowboy boots. A cheap cigar smoldering in an ashtray.

“Sorry Robert, I didn’t mean no harm by it. I was just making a friendly observation. I completely understand how you might feel. And I won’t be taking any points away just because you might talk a little rough. A man in your position can’t always be expected to keep a cool head.”

“I want you to listen to my instructions.”

Robert slid down the wall to the floor, head pounding as he fought off the dope still coursing through his veins. He wanted to hurt this stranger who’d stolen his family from him, draw it out until the man was incapable of ever having another humorous thought before he did him the favor of sending him to hell…

“You need to prove to me they’re still alive.”

Wind howls across the high desert plain. It has just rained and the sharp tang of juniper dominates the cool night air. A torso of dark clouds and lightning continues to thrash along the far slopes of Mt. Jefferson and Mt. Hood. Arms thick with rain stretch eastward, brandishing ocher fists high above a badly weathered farmhouse where a group of three men and a boy prepare to carry out an execution.

Dirt by David Vann
Rebel Spirits by Ruby, Lois
Homicide at Yuletide by Henry Kane
A Famine of Horses by P. F. Chisholm
The State by Anthony de Jasay by Jasay, Anthony de
So Bad a Death by June Wright
Desperately Seeking Heaven by Jill Steeples
Chiffon Scarf by Mignon Good Eberhart
Shame On Me by Cassie Maria
A Street Divided by Dion Nissenbaum