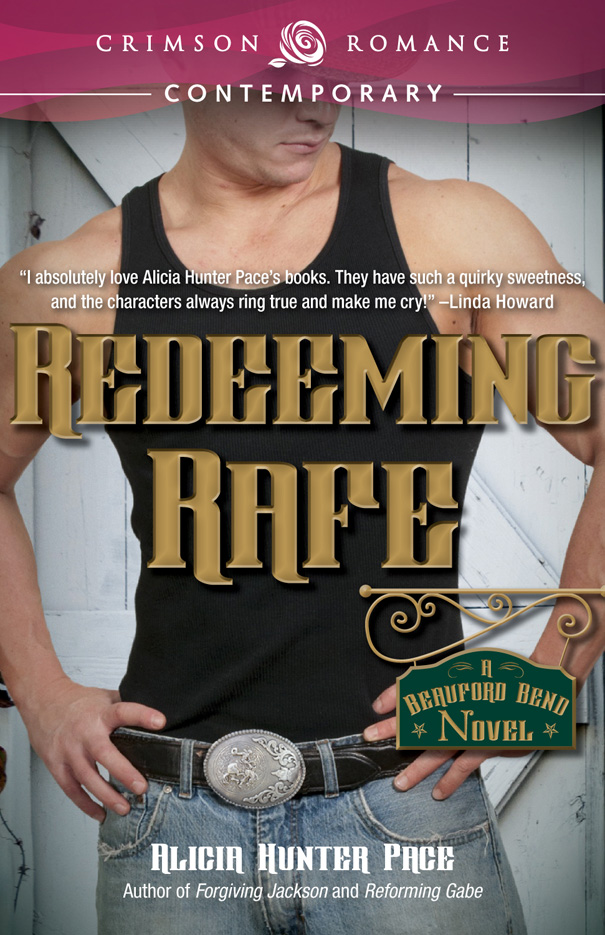 Copyright © 2015 by Jean Hovey and Stephanie Jones.
All rights reserved.

To the Winston County Gang, who taught me all about the Mighty Bucky, horse sales, and round pens. SLJ

Horses, rodeos, and horse country was new territory for us. Many thanks to Lynn Raye Harris, Cynthia Wallin, and Linda Tucker who were willing to share their knowledge.

As always, we are grateful for the talent and hard work of Tara Gelsomino, Jess Verdi, and Julie Sturgeon. They never fail to give 100 percent to every project.

Every writer knows the value of a good copy editor, and we don’t have a good one—we have the best. Stephanie Riva, you are a golden ticket. Thank you.

Thank you for purchasing a Crimson Romance novel. Please sign up for our
[weekly newsletter]
for information on new releases, contests, discounts and more.

Nothing like a pair of screaming two-year-old twins to keep a man awake.

If not for the ear-splitting racket coming from the back seat of his Super Duty F-350 Ford pickup truck, Rafe Beauford would probably have fallen asleep at the wheel two hours ago. Though it was supposed to be a ten-hour trip from Denton, Texas, to Beauford, Tennessee, he’d already been on the road for fourteen hours. He’d stopped at least fifteen times since he’d left Denton last night to try to quiet those kids, but fact was, he didn’t know how. Beauford was still an hour in front of him, and the girls had been screaming bloody murder the entire time.

Not that he blamed them. He wanted to scream, too. Oh, yes he did. Never in his life—even when he was about to face the meanest bull on the rodeo circuit—had Rafe Beauford wanted so badly to scream. But he didn’t. At age ten, he’d set up a few rules for himself, and chief among them—Rule One—was don’t fear. And if you failed at Rule One, as he was doing right now in the worst way possible, there was Rule Two to get you through: don’t show fear.

He hadn’t pulled over since daybreak. The name of the game now was power through and get to his childhood home, Beauford Bend Plantation, where there would be help and hope.

Funny. He’d always prided himself on not needing any help; in fact it was one of the rules. Hope had been such a foreign concept that there was nothing about it one way or the other in the rulebook.

The night he’d watched his parents and baby sister die in a fire—a fire that had been caused because he’d been a coward—Rafe Beauford had learned there was no point in ever worrying about anything again because the worst thing that could ever happen to him had.

Now he wasn’t so sure.

This time last week, all he’d had to worry about was the next eight seconds on the next bull’s back.

Then the call had come from Tawny’s sister, Fawn. He barely remembered Tawny, and with good reason. It had been nearly three years since their unmemorable one-night stand. Still, he was sorry to hear she’d been killed in a motorcycle accident—but not nearly as sorry as he’d been to hear he was being summoned for a paternity test. Fawn was just giving him a heads up before the court order came.

Things like this didn’t happen to him. He was careful, had never been in trouble, never even been in a real relationship. His agent and lawyer, Kevin, had pointed out that it didn’t take a relationship to make a baby.

So they’d hauled ass to Denton, Texas, to discover not one, but two babies—baby girls that stopped him in his tracks and robbed him of all rational thought. Though he hadn’t quite believed it before, the moment he saw them, he knew they were his. They looked like him and his twin, Gabe—and Camille, their sister who had never seen three years old. In that moment, the only other thing Rafe was sure of was that he could not be a father. Impossible.

He’d offered to leave them with Tawny’s family, but even with his generous offer of support, they had all they could handle. The only thing left to do was take the girls to Beauford Bend. Long ago, Beauford Bend had meant home, help, and comfort. And he had no choice but to find those things again. He had nowhere else to go.

“Cookie!” That would be Bella. Or maybe Alice. He couldn’t tell the difference. At least Tawny had given them normal names. Though he had hardly known her, Tawny had seemed like the type to give her kids names like Cheyenne or Diva.

“Coming right up, kid.” He reached into the bag of Oreos sitting beside him and flung a handful over the back of the seat. It probably wouldn’t work. It hadn’t before. Neither had the M&M’s or the potato chips.

He should have sent for his brother Jackson’s private plane. Unlike his twin, Gabe, Rafe had never made use of the plane. That came under that not needing any help rule. Gabe, on the other hand, said there was no point in having a country music superstar for a brother if you couldn’t enjoy the perks.

Of course, Gabe, an elite NFL quarterback, could have bought his own plane if he’d wanted. Not so Rafe, though he couldn’t complain. Bull riding could make you rich or leave you flat broke, sometimes both within the same year. Since he was one of the best on the circuit, Rafe had been luckier than most, but a cowboy’s life was full of surprises—a broken shoulder in the middle of Cowboy Christmas, getting stranded in a Montana snowstorm with a big cash prize five hundred miles away, two years worth of back child support for a surprise set of twins.

It all added up. He was still a million or two to the good, but he’d never have the kind of money Jackson and Gabe had. Not that he needed it.

Or hadn’t needed it. What the hell was a juice box, and how much did it cost?

“Hang tight, kid,” he said. “I’m taking you to somebody who knows all about juice boxes.”

And she would. Jackson’s wife, Emory, would know. And with her kind, soft heart, she’d fall in love with these kids on sight.

With any luck, he’d be in Tulsa by Tuesday, where there was a bull waiting on him. He drove faster.

“No, Mama!” Abigail Brooks Whitman’s son, Phillip, cried when she lifted him from his crib.

“Shh.” She settled him against her shoulder and whispered. “Sorry, baby. I know it’s early, but you’re going to Beauford Bend today while Mama works.”

“No, Mama!” Even though that was Phillip’s favorite phrase this week, regardless of what was being offered him, guilt washed over Abby. Five o’clock was too early to get a two-year-old up and out of the house, but this morning was the monthly Rotary Club breakfast at Mill Time, where she worked as a waitress, and she couldn’t afford to turn down the extra work—plus, Rotary tips were great. She was lucky that her friends, Emory and Gwen, at Beauford Bend were willing to help her out when she got extra shifts, because there was no way she could afford to pay the daycare one more cent than she was already paying.

That she could do. Poppy was paid for. As Abby retrieved the stuffed pony from the crib, a new thought assaulted her. How long was Phillip going to be able to sleep in that crib? It was just a matter of time before he would start trying to climb out, and she couldn’t afford a youth bed. She could put the crib mattress on the floor for a while, but he couldn’t sleep like that until he left for college.

If
he left for college. How was she going to manage that when she couldn’t even buy a bed?

Abby changed Phillip’s diaper and picked up the bag she’d packed for him the night before. Thank God for Gwen and Emory. Gwen was the catering manager for Emory’s events business, Around the Bend, and lived on the plantation, along with her two children and her husband Dirk, who was head of security. Gwen would bathe, dress, and feed Phillip along with her two kids. Since there were no parties today, Emory had assured Abby that she would also help out with Phillip.

“Ready to go?” Abby kissed the top of her son’s blond head.

“Yes!” She smiled.
Yes
was a rare and welcome thing these days.

But he was the only one who had decided to be positive. When she buckled him in his car seat, she could only think of how he would outgrow that soon, too.

She could just hear her mother’s finishing school, Boston voice now.
It doesn’t have to be this way, Abigail. You can move home.

Except Boston wasn’t home anymore. Beauford was home—where she wanted to live and raise her child. Abby understood why her parents and her late husband Gregory’s parents wanted her back in Boston. Phillip was the only grandchild they would ever have.

Plus, they wanted to run her life like they’d always done.

Both only children, Abby and Gregory had grown up next door to each other in two- hundred-year-old inherited houses in elite Beacon Hill. Gregory’s parents had been Aunt Meg and Uncle Nate long before they’d become her in-laws. The parents had never expected Abby and Gregory to pick up and move to Beauford three months after the wedding or for Gregory to leave the family investment firm to apprentice to a master stained glass artist in one of the most respected artisan communities in the country. And, frankly, Abby hadn’t expected it herself. But after so many years of doing the right thing at the right time in exactly the right way, she’d been up for a little adventure.

What she hadn’t been up for was Gregory’s spelunking accident that had left her a widow with one month to go in her pregnancy—nor her guilt over her unreasonable anger at Gregory for doing such a foolhardy, dangerous thing in the first place.

It had been easy to let the parents take her hand, lead her back to Boston, and put her to bed in her old room. It had been easy to lay there and grieve until Phillip was born, and easy to return to that room to recover from the difficult birth and the news that she wouldn’t have any more children.

So easy, until the morning she’d woken, gone to the nursery, and found Phillip gone.

She must have looked like a lunatic standing there barefoot, in her nightgown, with her hair falling in her face as she screamed down the house.