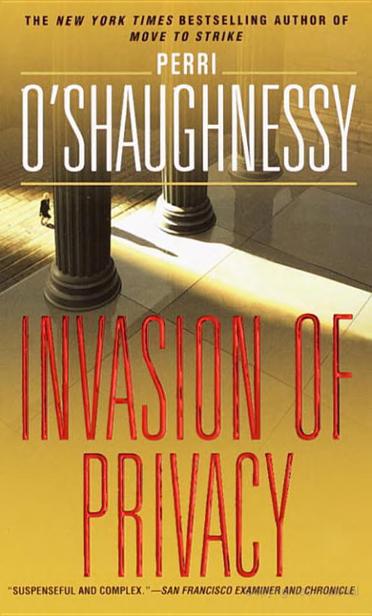 BOOK ONE - Twelve Years Ago: Tamara

Dedicated to
Brad and Fritz

In memory of
Katherine G. Wright of Owego, New York
and
Rhoda Snedecor of Dallas, Texas

Through me you pass into the city of woe.

"A LIVELY DEBUT... THE PLOT IS A REAL
PUZZLER, WITH TWISTS DIABOLICAL
ENOUGH TO TAKE TO COURT."

"MOTION TO SUPPRESS IS NONSTOP EXCITEMENT! O’Shaughnessy combines the mystery of a masterful whodunit with edge-of-the-seat courtroom drama, and mixes in plenty of riveting psychological intrigue. The portrayal of the glitz and the underbelly of the casino world is top-notch and the characters are finely drawn."

"MOTION TO SUPPRESS DRAWS YOU IN ON PAGE ONE AND NEVER LETS YOU GO. Perri O’Shaughnessy writes about the law with authority, and in Motion to Suppress, she has created two strong, sympathetic characters and placed them in a fast-paced, compelling plot that will keep readers turning the pages into the wee hours of the morning."

"This courtroom drama maintains a swift pace ...
a Roman candle of a novel that just may rocket
O’Shaughnessy to pop-lit fame."

"AFTER READING THE OPENING CHAPTER OF MOTION TO SUPPRESS, I GENUINELY COULDN’T PUT IT DOWN. Perri O’Shaughnessy has done a masterful job of presenting both a battered wife and refugee lawyer. The Lake Tahoe setting rings true, and the only aspect of the book I found hard to believe was that this is a first novel."

—Jeremiah Healy, author of Rescue and Act of God

"A FAST-PACED LEGAL THRILLER.
All the ingredients for a best seller are present in this
first novel. "

Once again, our grateful thanks to Nancy Yost and Marjorie Braman.

On the other side of Tamara’s locked bedroom door, her mother was pounding and yelling again. She yelled often, most often at Tamara, but when she was loaded she also yelled at Tam’s father, who had an unpredictable, violent streak Tamara had learned to avoid. She guessed her mother used alcohol to stand up to her bully of a father, and also, in the same way Tam did, to create a more tolerable reality, so she understood the attraction of being bombed. That didn’t make finding her mother passed out on the kitchen floor after one of her periodic binges any easier to take, though.

Lately, things seemed worse around the old burg. Two weekends in a row now her mother had gone on a bender, and her father’s response had been to tear through the house, breaking up most of the dining room one evening.

"Okay already, I’m putting it out right now." She took another long drag on her cigarette, and blew the smoke at the doorway. Her mother, temporarily placated by her words, retreated, probably to get another drink. Tam sat on her bed, trying to build her strength up for the battle to come, the one she thought of as her standard Friday night war. Her parents never wanted her to go out, but she was eighteen and had a right and they knew it. Still, she had to convince them, stormtrooping her way through a barrage of questions, arguments, sometimes tears. Oh, God, it was hard living at home. She couldn’t wait to have her own place.

Which brought up another depressing issue, her lack of money. She was flunking math and geology in school, something her parents didn’t know yet, but they would soon. Maybe then they’d let her get a job. She knew they were holding on to this old college dream for her, one she’d given up a while back, along with her dreams of staying forever with the first man she’d ever really loved. Life had taken an unexpected turn for her, and she discovered right away that she liked not knowing what came next. She liked pissing into the wind like a man, and seeing which way it blew, without caring who or what it hit.

She took a deep breath, stuffed her last bills into her pants pocket, and unlocked her door. She grabbed her rabbit coat. That was a must. A storm was coming. The windchill made the temperature feel like zero degrees all around Tahoe tonight, the radio said. She really ought to wear her down jacket; that kept her warmer. But not tonight, no, that wouldn’t do, would it? She needed her favorite coat tonight.... She put it on and smiled, ready for anything the evening had to offer, as she walked downstairs to confront her parents.

She nursed the old pickup slowly along the slick Pioneer Trail to Manny’s, pulling into a parking spot right by the front door. She was still going over the evening’s fight in her mind. No matter how nice she was, no matter how hard she tried, they hated everything about her. They wanted her chained to the old person she was a long time ago, their baby girl, forever. They hated the way she looked, the clothes she wore, that "ratty" coat. They hated her attitude. They hated everything she said, trying to talk over her, afraid to listen, afraid of what they might hear. She couldn’t go on like this!

Shake it off, she told herself. Don’t let them totally burn you out. She tried an old trick, rewriting the evening into a silent conversation with her parents that ended better, with everyone civilized and normal, and her like any other girl just going out for a few hours to have a little fun, but it didn’t work tonight. Their words stung. Their anger hurt. She sat in the car, letting her own anger flare up and burn for a few minutes, until she started to feel the deep winter of the outside creeping into her car. She walked into Manny’s without looking around and sat at the bar, ordering a gin for a quick, clean buzz. They didn’t even bother to check her fake ID. She’d left the house a little early. The fun started later; meanwhile, she intended to kill an hour or so sitting in a dark corner, just her and Mr. Alcohol for company.

"Hey, Tam!" said a voice across the room.

Oh, no. She turned to look, spotting Michael and Doreen across the room. She gave them a wave and turned back to her drink. It would be Michael. He was like a black cat crossing her path, a curse on her. Maybe if she ignored him they’d leave her alone.

They approached, Michael eager as a racehorse after the starting shot, Doreen trailing miserably behind.

"Mind if we join you?" he asked, sliding his jeans onto a stool beside her and ordering a beer. He winked at her, and sat as close as he could without touching. Doreen stood near them both, looking unsure about where to put herself. Tam ordered another drink and put it away as fast as she could.

Michael launched into a monologue about what he’d been doing lately. When he noticed she wasn’t listening, he switched gears and started pebbling her with questions. He’d heard about her troubles in school. She’d always been smarter than any of them, and was certainly the best looking of them all. What was going on? And what was the story with this new dude she was seeing, huh? Was it true this was the man to see if you had it in mind to get wasted?

She didn’t feel like getting involved in his song and dance, and she told him so. She didn’t know what it was with him, but any attention from her just made things worse. He seemed to think she was bored, so he talked faster and more vehemently, probably just trying to get her interested in what he was saying, but he made her nervous and jumpy, and she didn’t need that. He kept after her, picking and picking, jealous of the mystery boy he thought she might be meeting tonight, and unable to lose the topic, like a parakeet that knows only one word and shows it off day and night until you go bonkers.

Sick of him, she tossed her beer in his face. He closed his mouth, looking hurt, his lip trembling like a baby’s.

While Doreen mopped him up, she went to make a phone call. It was late enough.

She went to pay for her drink and had one more brief fracas with Michael while Doreen stood by, looking disgusted. He apologized. He wanted them to be friends. He insisted on paying.

Fine, let him. She was down to her last few bucks. She left without saying good-bye.

The truck balked at first, but finally started. She headed up the highway toward the turnoff, then tackled the unplowed road in four-wheel drive. A bright moon cast shadows over the road, lighting the way. She pulled off the road and checked her watch. It was time.

Glad to have her warmest boots on, she slipped and slid up the trail to their rock. Her friend would meet her there.

But he was late and there was nothing there, except the moon and the shadows that moved in the wind. Nothing there, she told herself. But as the minutes ticked by, and the darkness settled around her like a freezing shroud, she thought there might be something. She felt eyes, even though she couldn’t see them. She felt afraid. She thought about leaving, but that would wreck everything. She needed something from him to keep her going, just this once. This would be the last time.

She would give him one more minute.

Dog On It by Spencer Quinn
Love Gently Falling by Melody Carlson
Real Life by Sharon Butala
Wrapped Around My Finger by Kristen Strassel
Young Tales of the Old Cosmos by Rhys Hughes
Unacceptable by Kristen Hope Mazzola
Mesopotamia - The Redeemer by Yehuda Israely, Dor Raveh
Anything Can Be Dangerous by Matt Hults
Blueberry Blues by Karen MacInerney
Alanna (When Hearts Dare Series Book 2) by Kathleen Bittner Roth