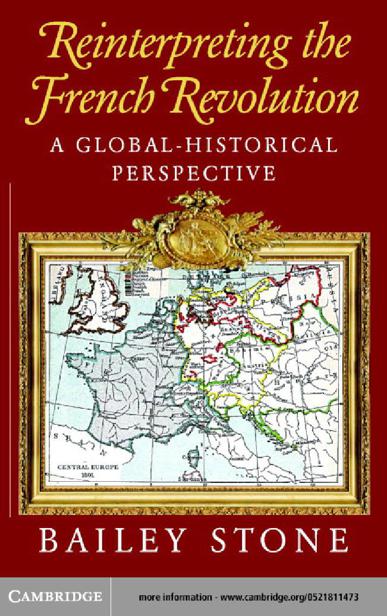 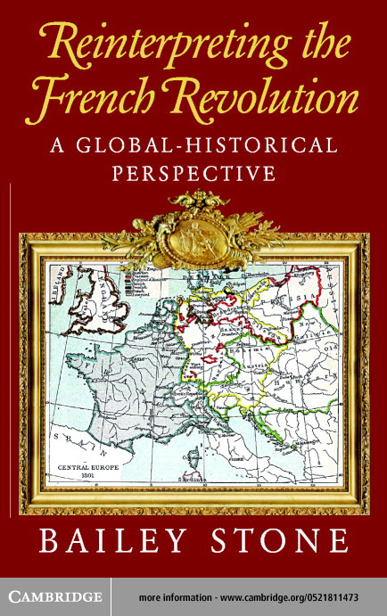 century and revolutionary France. On the basis of that synthesis and

argues that the outbreak of the French Revolution, and the dramatic

developments of the subsequent ten years, were attributable to the inter-

acting pressures of international and domestic politics on those national

leaders attempting to govern France and to modernize its institutions.

The book furthermore contends that the revolution of 1789–99, recon-

ceptualized in this fashion, needs to be placed in the larger contexts of

sociopolitical revolutions. In staking out these positions, Stone offers a

unique interpretation of the French Revolution, one that dissents from

both the Marxist socioeconomic orthodoxy of earlier times and more recent

Bailey Stone is a professor of history at the University of Houston. His

previous books include
The Parlement of Paris, 1774–1789; The French

Parlements and the Crisis of the Old Regime
; and
The Genesis of the French
Revolution: A Global-Historical Interpretation.

1 The ancien régime: challenges not met, a dilemma

2 The descent into revolution: from August 1788

3 The first attempt to stabilize the Revolution:

4 The “revolutionizing” of the Revolution:

5 The second attempt to stabilize the revolution:

Conclusion: the Revolution in the French and global context

laboring in the trenches of old regime and French Revolutionary studies.

pages; at the very least, however, I want them to realize how grateful I am

I also acknowledge, in a more specific fashion, the encouragement

and advice I have received from certain colleagues in the profession

since taking up this project in 1993. I am in particular thinking here of

and Robin Briggs in the United Kingdom. Probably I should mention

my evolving ideas on the genesis, process, and ramifications of the French

Houston and to my associates in the Department of History at UH. A Pratt

embarking upon the reading required for this synthesis. A University

of Houston Faculty Development Leave Grant subsequently made it

responsibilities during the 1995–96 academic year. My colleagues in the

invaluable critical reactions to ideas destined to be elaborated in this

I am grateful as well to Frank Smith, Publishing Director for Social

Sciences at Cambridge University Press in New York City, to his editorial

associates, and to the anonymous readers of my manuscript for their roles

in its acceptance and preparation for publication.

my life. Again, as before: they know who they are.

of commemorative activities, but it has not left in its wake any scholarly

consensus on the causation, development, and implications of that vast

upheaval. To the contrary, historians barely finished with the pleasurable

of the twentieth century have turned their spades upon each other, all the

France of 1789–99. This book certainly does not expect to restore consensus

in a field beset by such controversy, but it can at least hope to put forth some

distinctive ideas on the subject. More specifically, it will contend that the

Revolution broke out, and unfolded in the way it did, primarily because of

competing international and domestic pressures on French governance in

the late eighteenth century. By placing the revolutionary experience in such

a broad spatial setting, as well as in the broadest possible temporal setting

of modern world history, this book aims to present its case in genuinely

Since this study is heavily indebted to the enormous historical and

sociological literature on the revolutionary era, a few observations about

the debate arising from that literature are first of all in order. We can then

Across a Moonlit Sea by Marsha Canham
The Carpenter's Pencil by Rivas, Manuel
The Story of Us by Deb Caletti
A Wounded Name (Fiction - Young Adult) by Hutchison, Dot
Sarah Simpson's Rules for Living by Rebecca Rupp
Devourer by Liu Cixin
Double Trouble by Sue Bentley
Married At Midnight by Katherine Woodwiss
Jacob's Odyssey (The Berne Project Book 1) by Melrose, Russ
Values of the Game by Bill Bradley