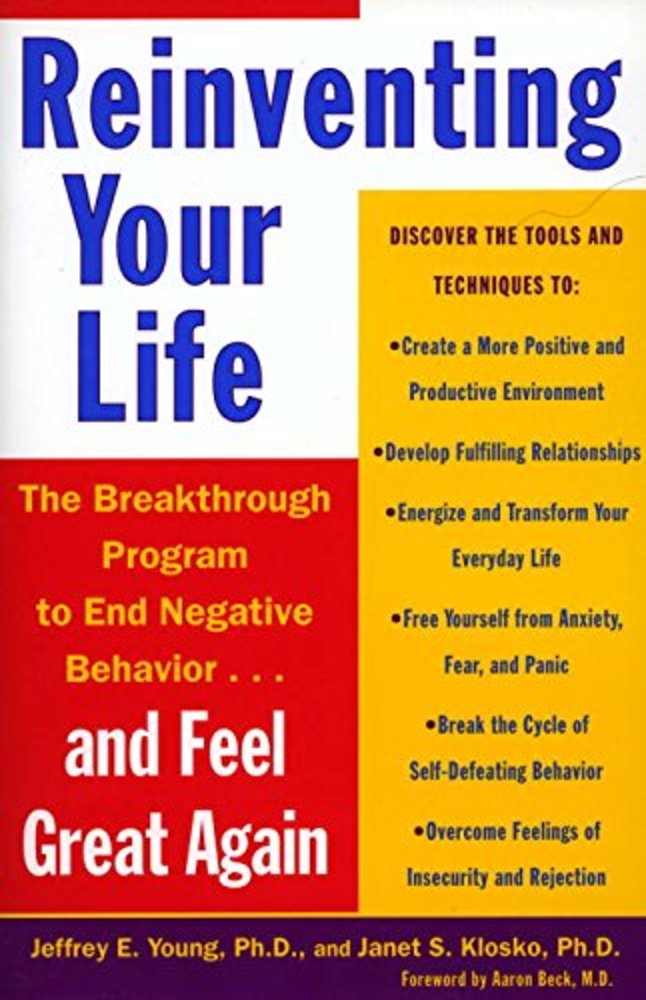 Published by Plume, a member of Penguin Putnam Inc.

Previously published in a Dutton edition.

For Manny, Ethel, and Hannes, who have loved and supported me unconditionally.

For my mother, father, Michael, and Molly, who all gave me the space to write this book.

Reinventing Your Life
has special meaning. This book represents the culmination of years of personal and professional growth for each of us. For this reason, we have many people to thank, past and present, who have in some important way contributed to our development.

We are indebted to Dan and Tara Goleman, without whose guidance, faith, advice, gentle prodding, and of course, friendship, we would never have undertaken such an overwhelming project; to Arthur Weinberger, for his suggestions and encouragement during many years of developing the schema-focused model; to William Zangwill, who, in his invaluable role as devil’s advocate and critic, has inspired us to sharpen and refine our ideas; to David Bricker, who, through his involvement in new approaches to psychotherapy, continually offers us fresh perspectives to consider; to Cathy Flanagan, for her help in running the Center, her intelligent comments, and her warmth; to Bill Sanderson, who has played an important role as Director of Training at the Cognitive Therapy Center of New York and as co-director at the Cognitive Therapy Center of Long Island; to Marty Sloane, Richard Sackett, Jayne Rygh, and all our other friends and colleagues in New York who have contributed to the development of this approach; and to our editors Deb Brody and Alexia Dorszynksi, who helped give the book its form and tone, and to our agent Pam Bernstein, who helped make the book possible.

I would like to extend my personal thanks to several other people who have played important roles in my development. To Janet Klosko, for making this collaboration so stimulating and fruitful. I could not have „reinvented“ anyone better to work with; to Will Swift, who, like my father, has always had supreme confidence in me, even when I was not so sure—thank you for helping me get my ideas on tape, and for providing crucial feedback over the past eight years; to Aaron (Tim) Beck, who, through his clinical wisdom, penetrating intelligence, and empirical approach to personal and professional problems, has served as my mentor. To Peter Kuriloff and Arthur Dole, my graduate school advisors, for their friendship, for having confidence in me, and for being open enough to give me the freedom to pursue cognitive therapy before it was widely accepted; to Candice, for putting up with me and for her devotion in shouldering much of the responsibility I cannot handle; to Richard and Diane Wattenmaker, Bob Spitzer, Janet Williams, Gene D’Aquili, and many others who have contributed in ways they probably do not realize.

I have been fortunate throughout my life to have a family that I can always rely on for praise, reassurance, and acceptance, regardless of what I have gone through personally. For accepting all my quirks, I would like to thank my parents, grandparents, brother Stephen, sister Debra, and the other members of my extended family. I have learned through working with patients less fortunate than I not to take such support for granted.

I would like to thank all the other people who helped me become the psychologist that I am. I would like to start by thanking Jeff Young, for being such an exemplary model, and for giving me the best form of therapy I have ever known. I would like to thank my mentor, David Barlow, for teaching me the meaning of the word „professional,“ and for encouraging me to fulfill my talents. I would like to thank my supervisor in New York City, Will Swift; Ann De Lancey, Mike Burkhardt, and my fellow interns and other advisors from Brown University; and from SUNY at Albany—Jerry Cemy, Rick Heimberg, John Wapner, Glen Conrad, Robin Tassinari, Jim Mancuso, Robert Boice, Bill Simmons, Alan Cohen, my warm supportive classmates, and others. Finally, I would like to thank the other members of my family and close friends, for everything they have given me.

I am delighted that Jeffrey Young and Janet Klosko have tackled the difficult issue of personality problems, drawing upon the techniques and principles of cognitive therapy. The authors have done pioneering work in developing and making available to the public a powerful set of tools for making significant life changes in relationships and at work.

Personality disorders are self-destructive, lifelong patterns that bring patients tremendous unhappiness. People with personality disorders have long-term problems with living, in addition to specific symptoms like depression and anxiety. They are often unhappy in their intimate relationships or chronically underachieve in their careers. Their overall quality of life is usually lower than they desire.

Cognitive therapy has been expanding to meet the challenge of treating these difficult, chronic patterns. In treating personality problems, we address not only sets of symptoms—depression, anxiety, panic attacks, addictions, eating disorders, sexual problems, and insomnia—but also underlying
schemas,
or controlling beliefs. (The authors refer to schemas as
lifetraps.)
Most patients come to therapy with certain core schemas that are reflected in many symptom areas. Addressing these core schemas in treatment can have beneficial effects that reverberate throughout many areas of the patient’s life.

Cognitive therapists have found that certain signs point to the likelihood of a schema-level issue. The first is that the patient discusses a problem and says, „I have always been this way, I have always had this problem.“ The problem feels „natural“ to the patient. Secondly, the patient seems unable to carry out homework assignments that the therapist and patient have agreed upon during sessions. There is a sense of being „stuck.“ The patient both wants to change and resists changing. Thirdly, the patient seems unaware of his or her effects on other people. There may be lack of insight about self-defeating behaviors.

Schemas are hard to change. They are supported by cognitive, behavioral, and emotional elements and therapy must address
all
of these elements. Change in only one or two realms will not work.

Reinventing Your Life
addresses eleven of these chronic, self-defeating personality patterns, known in the book as lifetraps. This book takes very complicated material and makes it simple and understandable. Readers will easily grasp the idea of lifetraps, and quickly be able to identify their own. A wealth of case material, drawn from actual clinical experience, will help readers relate to the lifetraps in a personal way. Furthermore, the techniques the authors present are powerful in producing change. Their approach is integrative: it draws on cognitive, behavioral, psychoanalytic, and experiential therapies, while maintaining the practical, problem-solving focus of cognitive therapy.

Reinventing Your Life
presents practical techniques for overcoming our most painful, lifelong problems. The book reflects the tremendous sensitivity, compassion, and clinical insight of its authors.

Why another self-help book?

We believe that
Reinventing Your Life
fills an important gap in the books currently available for self-improvement. There are many excellent self-help books, just as there are many fine therapy approaches. However, most of these are limited. Some books only deal with one specific problem, like codependency, depression, lack of assertiveness, or making poor partner choices. Some deal with many problems, but only use one means of change, like inner-child work, couples exercises, or cognitive-behavioral methods. Other books are inspirational or do a great job of describing a universal problem like loss, but the solutions they offer are so vague that we don’t know how to go about changing once we have the inspiration.

In
Reinventing Your Life,
Janet Klosko and I share with you a new therapy for changing major life patterns. Lifetrap therapy addresses
eleven
of the most destructive problems we encounter every day in our practices. To help you change these lifetraps, we combine techniques from several different therapies. As a result, we think this book will provide you with a far more thorough and comprehensive approach to a variety of lifelong problems than most books you have read so far.

Since this book is about personal growth and change, I’d like to describe the path I followed leading to the development of lifetraps therapy.

In many respects my development as a therapist mirrors the journey of self-discovery we outline for you in this book.

It began in 1975 when I was a graduate student at the University of Pennsylvania. I remember my first experience doing therapy as an intern at a community mental-health center in Philadelphia. I was learning Rogerian therapy, a nondirective approach. I remember feeling stymied much of the time. Patients would come to me with serious life problems, expressing powerful emotions, and I was taught to listen, to paraphrase, and to clarify so patients could arrive at their
own
solutions. The problem, of course, was that often they didn’t. Or, if they did come to their own resolution, it took so long that I became terribly frustrated by the time therapy was over. Rogerian therapy did not fit my temperament, my
natural inclinations
. Perhaps I am too impatient, but I like to see change and progress relatively quickly. I become easily frustrated in circumstances where there is a serious problem and I have to sit by helplessly watching, unable to correct it.

Within a short time, I began reading about behavior therapy, an approach that stresses rapid, concrete behavior change. I felt an enormous relief. I could be active and offer advice to patients instead of being so passive. Behavior therapy offered a well laid out framework that explained why patients had specific problems and exactly which techniques to use. It was almost like a cookbook or technical manual. In comparison with the vague approach I had originally learned, the behavioral model was very appealing. It was geared toward fast, short-term change.

After graduate school in 1979 i began studying cognitive therapy with Dr. Beck. I loved demonstrating to patients how their thoughts were distorted and showing them rational alternatives. I also liked pinpointing problem behaviors and rehearsing new ways of handling everyday situations. Patients began to change in dramatic ways: their depression lifted, anxiety symptoms went away. I also found that the techniques of cognitive therapy were extremely valuable to me in my personal life. I began spreading the word about cognitive therapy to other professionals through lectures and workshops in the United States and Europe.