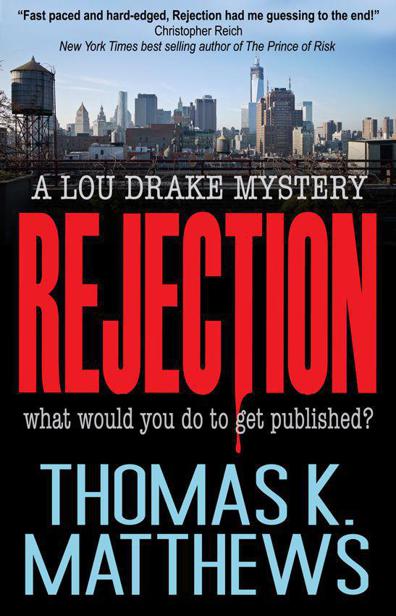 Rejection
is a work of fiction. Names, characters, places, and incidents either are products of the author’s imagination or are used fictitiously. Any resemblance to actual events or locales or persons, living or dead, is entirely coincidental.

ALL RIGHTS RESERVED. This book contains material protected under International and Federal Copyright Laws and Treaties. Any unauthorized reprint or use of this material is prohibited. No part of this book may be reproduced or transmitted in any form or by any means, electronic or mechanical, including photocopying, recording, or by any information storage and retrieval system without express written permission from the author.

NEW YORK WAS in general tumultuous calamity; all taxi cabs and urgent pedestrian migrations that clogged the streets. Long and black, chromed and whisper quiet, the limo negotiated traffic. Lou Drake felt the familiar tug of the surreal as he looked around the limousine’s sumptuous interior. Deeply tinted windows muted the morning sunlight, which reflected off fine crystal glasses and gleaming leather as the driver pulled to the curb at 1290 Avenue of the Americas.

Even after several years of this celebrity treatment, Drake had never gotten used to it. Deep down he still thought of himself as a cop, a public servant who cleaned up the messes people made when they couldn’t get along.

But not anymore, he thought.

The driver quickly hopped out to open Drake’s door. The young man’s uniform was starched straight and he wore a gloss black cap. He stood rigid as a soldier at attention while Drake hefted his girth out of the deep upholstery.

“Relax,” Drake said with a smile, “it’s not like you’re driving the President around today.”

“Yes sir,” the driver said, but his face remained serious.

Drake held out his hand for a shake, which the young man returned with a satisfyingly firm grip.

“Well thanks for the drive, Josh.” Drake handed the young man a twenty. “And forget the ‘sir’ business. Just plain old Lou will do.”

Drake chuckled. “Thanks,” he said.

“Mister Drake?” a voice called and Drake turned to see a smiling woman waiting for him on the sidewalk. She was pretty but too thin in Drake’s opinion. Sharp in a pearl gray suit, her blond hair was cut short and gave her a look like an eighties pop star.

Drake’s meaty hand engulfed hers as they shook.

“Pleased to meet you Stephanie,” he said with a disarming smile. “And call me Lou.”

Stephanie led him through the glass doors into a large lobby.

“They’re ready for you upstairs,” she said. “You’re in conference room three.”

“I’ve read all your books,” Stephanie said. “The last one gave me the shivers. I couldn’t sleep for a week.”

“Gracious me, we can’t have that.”

Stephanie pressed the elevator button and they rose to the sixth floor where the doors opened with a ding.

“Can I get you something to drink?” Stephanie asked.

“Diet Coke, if you have one,” Drake said.

“I do,” she said. “I even have the flavored kinds if you would prefer.”

“Vanilla would be nice,” he said as they walked from the elevator to the conference room.

“Make yourself at home,” she said, “and I’ll be right back with your drink.”

Drake surveyed the room as he took a seat. As a former Detective he had a talent for taking in a scene with a quick scan. He instinctively categorized the details and came to a judgment. This room struck him as an ominous chapel to those who had influenced the world with the written and spoken word. Artsy black-and-white photos of celebrities adorned the walls, silent reminders of statesmen, rockers and authors interviewed over the years. Brooding Mailer, pouting Capote, and the cautious King looked back at him from their frames. Drake found it strange that he might now be included in this group.

At least it was print and not television. No hour in the make up chair, enduring sweet talk from the attending personnel as they tried to make him presentable. Drake glanced at his reflection in the glass wall and saw an overweight, ruddy-cheeked man in a good suit that fit badly. No question about it, he had a face for radio.

Stephanie arrived with the soft drink and a tall glass of ice.

“Here you go,” she said as she placed the drink in front of him.

“Thanks Stephanie,” he said with a smile.

Her helpful manner reminded him of the flight attendants in first class. He half expected her to tell him they would be landing in an hour.

Stephanie left as the interviewer came in with an intense rush of flashing eyes, jet-black hair, and an energy drink. Thin and Asian, he wore a Free Tibet t-shirt, jeans and white athletic shoes.

Chang set a small digital recorder and legal pad on the table and they shook hands.

“Glad to meet you,” Drake said.

“The pleasure’s all mine,” Chang said as he dropped into a chair. “I was thrilled when the suits told me I drew this assignment. I’ll be recording, is that okay?”

“Thanks Robert. The recorder is fine,” Drake said.

“What you do is so intense,” Chang said as he clicked on the recorder. “I mean, BODIES OF EVIDENCE was just wild.”

“What was that like,” Chang said, “interviewing someone who killed 36 people?”

Drake thought back to the many hours in a cramped cinderblock room on death row, digging for gory details while the killer chain-smoked.

“That was Gary Malden,” Drake said. “He was a piece of work all right. I was with him every day for two months and he never looked me straight in the eyes once.”

Chang shook his head in wonderment. “It must have been like hanging out with the devil.”

“I suppose,” Drake said, “but talking with a killer is really like talking to anyone. First you make small talk, try to earn their trust. Then you can push deeper into what makes them tick.”

“That must be hard to hear,” Chang said.

Drake nodded. “Sure, but by the time I work my way into a killer’s mind I find I’ve gotten used to who they are and the shock has gone away. At least that’s how it works for me. Then the challenge is to write it down so other people can understand. Very much like what you do, I assume.”

“That’s true,” Chang said. “Let’s back up to when you started as a writer, back when you were a cop. Okay?”

Chang glanced at the notes on his legal pad. “You were a Detective in the nineties,” he said, “and then you ran into some issues.”

Drake nodded. “I was accused of mishandling evidence on a murder case.”

“As I understand it,” Chang said, “that was just the start of your troubles.”

“I’ve made no secret about it,” Drake said with a wry smile. “After they busted me back to patrol I went south pretty fast. I knew I was a scapegoat but had no idea who was behind it. My wife left and for a while I was just going through the motions.”

“And later your book HALLS OF JUSTICE exposed the real circumstances surrounding that case and not only exonerated you, but led to the resignation of some high ranking people. Am I right?”

“Yes, it was time of vindication for sure.”

“Yet the book that launched your writing career was PEN & THE SWORD, which was made possible when you solved a case that nobody else could. Wasn’t that your true vindication?”

Drake inclined his head in acknowledgment.

“I was as low as a cop can sink at the time,” he said, “burned out and about to retire in disgrace.”

“So what turned the situation around?” Chang asked.

Drake sipped his soda and gave the question some thought. Finally he said, “I thought more like a writer than a Detective.”

Chang gave him a surprised look. “You’ll have to explain that one.”

“So before you came in here you knew what you wanted to ask, and you had some idea what I might say. You had an outline, right?”

“Cops don’t always think like that. They look at the case and try to figure it out. I thought about the scenario as if I were writing it. That way I could use my imagination and think like a character, as though I was inventing the situation.”

Drake nodded. “And it worked.”

“That’s wild. Did you ever worry that you would start to act like a killer too? Or is the average person incapable of that?”

“Trust me,” Drake said with a laugh, “normal people can be driven to commit terrible acts.”

“Okay.” Drake leaned forward to gaze intently at Chang. “Imagine all you have slaved to achieve, all that you dreamed of, and all that defines you has been slowly taken away. Your self-image is shattered. Imagine that your life, your self-esteem, your very soul has been stolen and you find yourself in a pit of raging despair. I can tell you, young man, at that low point of undeniable darkness you may find yourself capable of not just murder, but an insidious drive to punish and decimate.”

Chang nodded slowly as if he were trying to process this.

“Is that what you learned from interviewing serial killers?” Chang finally said. “Or have you been in that raging pit yourself?”

Drake sat back and took another drink. He gave Chang a bemused look.

“Ever write a book?” Drake said.

“Does that mean you plan to some day?”

“I’ve thought about it,” Chang said.

“As you should,” Drake said, “but here’s something not everyone knows. The first book I wrote was actually a novel.”

“Was that MORTAL WHISPERS?”

“That’s right, and that manuscript was rejected over a hundred times. I almost gave up on the whole idea of ever becoming an author.”

“You’re kidding,” Chang said. “That book became a New York Times bestseller and was made into a movie. You had that much trouble getting it published?”

Drake shook his head in disgust. “Imagine pouring your soul into a creative effort and then being told over and over again that your best is not good enough. It can really sap your confidence.”

“It’s like running into a brick wall, and then having no idea how to get past it.”

“But yet you kept going.”

“Actually I quit writing for a while,” Drake said. “Turns out I had to lose myself to find out who I really was. I had to reclaim myself as a cop before I could become a successful author.”

“But obviously your novel was eventually published.”

“Sure,” Drake said, “but only after I caught a few breaks, solved a sensational case, and published five true crime books.”

“This seems like an emotional subject for you,” Chang said.

Drake took a deep breath and rubbed his amble stomach.

“It surely is,” he said. “I guess it’s all wrapped up in some painful times I went through.”

Chang leaned forward slightly and the intensity in his eyes brightened a notch. Drake could tell that his interviewer’s instincts had gone to high alert.

“Tell me about that,” Chang said.

Drake found his mind wandering back there, to that rainy night where it started, when he was at his personal bottom. This was a subject he had never discussed in public.

The Scent of Jasmine by Jude Deveraux
Dani's Story: A Journey From Neglect to Love by Diane Lierow, Bernie Lierow, Kay West
September Again (September Stories) by Jones, Hunter S., Poet, An Anonymous English
A Time of Omens by Katharine Kerr
Children Reason by JIN
The Petitioners by Perry, Sheila
Sentinels by Matt Manochio
A Scandalous Lady by Rachelle Morgan
Awaken Me Darkly by Gena Showalter
Steamed (A Maid in LA Mystery) by Jacobs, Holly