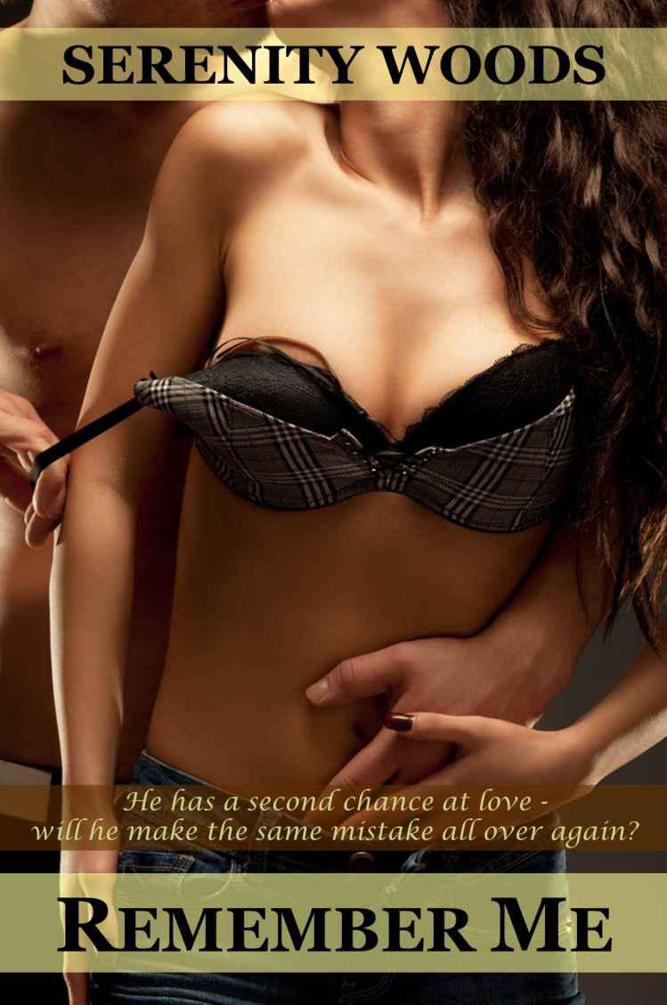 This book is a work of fiction. The names, characters, places, and incidents are products of the writer’s imagination or have been used fictitiously. Any resemblance to persons, living or dead, actual events, locales or organizations is coincidental.

Stranded with a Scotsman

Kiss and Make Up

Reviews for some of Serenity’s other books

“This book was an unexpected delight... I’ve never read a book quite like this one and I thoroughly enjoyed it. Hats off to Serenity for a completely romantic read!”—Close Encounters with the Night Kind

“This is not your typical sappy romance; you get a full range of emotions from laughter to almost tears.”—Recommended Read by Guilty Pleasures Book Reviews

“An Uncommon Sense had me laughing at some of the antics and things Grace blurted. The end came before I expected as the story rolled along so easily, leaving an enjoyable afterglow.”—Sizzling Hot Books

“This is a light-hearted, sexy read but a totally enjoyable one.”—Recommended Read by Dear Author

“One of the best holiday books I have ever read.”—Long and Short Reviews

Kiss and Make Up (writing as Faye Robertson)

“The movie set background, the friendships, the dynamic...it all just really worked for me and made this a perfect read for my taste. LOVED IT!”—Smitten with Reading

“Wonderfully written with witty dialogue, hot sex and two characters that were absolutely perfect together. A pleasure to read.”—Cocktails & Books

“I loved them as a couple and was desperately hoping for a HEA ending. Thank goodness Ms. Robertson delivered… And yes, it did make me cry just a little.”—Books n Kisses

“I LOVED this story and was glued to every word written... With fantastic lead characters, equally as interesting secondary characters, an intriguing plot and a deeply emotional tale of love--and I'd say Faye Robertson has delivered one helluva book!”—Paranormal Romantics

To Tony and Chris, my Kiwi boys

And to KP, for rescuing me again

“I’ll never remember your birthdays now.” Hamish McIntyre turned from the view of the New Zealand countryside and winked at his father, who was driving the car. Robert winked back.

“You never remembered them
before
you had amnesia,” his mother said wryly from the back seat. “Don’t think you can use that as an excuse.”

“Worth a try, though,” Hamish teased.

His brother, Eamon, also in the back, snorted. “Is that the sort of thing we can expect from now on? You milking this memory thing for all it’s worth?”

“Absolutely. I might as well make the most of it. And expect lots of jokes about me being legless too. Even when I’m not drinking.”

Everyone fell quiet, and Hamish glanced over his shoulder to see Sarah McIntyre biting her lip as she looked away. Eamon frowned at him, and Hamish cursed under his breath. He’d put his mother through hell over the last few months. He didn’t want to see her cry again. “Sorry, Mum. I guess you’re not quite ready for me to joke about it yet.”

She turned bright eyes back to him and managed a weak smile. “If you’re ready, I’m ready, love. I’m just so relieved you recognized us. I kept having this awful dream that we’d walk up to you and you’d stare at us blankly.”

Me too,
thought Hamish, although he didn’t say it. “Of course I’d recognize you guys. I’d have to have something a lot more serious than a bump on the head to knock you lot out of my memory.”

“So come on then,” Eamon said, “what can you remember, exactly? Is any of it coming back?”

Hamish looked out of the window again. “No. Not yet. It’s all a bit muddled up there, but pretty much everything I’ve done over the last ten to fifteen years has gone.”

“So you don’t remember anything about going into the Army?” his father asked. “Nothing about Afghanistan?”

“Perhaps that’s a mercy,” Sarah said hopefully. “At least you don’t remember being blown up.”

“Yeah,” Hamish said, although he didn’t agree. How could losing half his life possibly be a mercy? Everything he’d done since he was in his mid-teens had vanished—all the people he’d met, the places he’d been, the skills he’d learned. The fact that he couldn’t remember the blast from the suicide bomber throwing him halfway across the country didn’t make up for that.

To a certain extent, he could hide his amnesia, but he didn’t have the benefit of being able to disguise his other disability. It only took a glance to see he was damaged.

He rested his hand on his right thigh, his fingers curving over the end, above where his knee should be. It ached, as it always did, mirroring the ache inside him that no amount of medication could take away.

Hamish looked out at the palms and green fields of the Northland, lush and verdant in the hot summer sun. “So am I.”

Robert rested his hand on top of Hamish’s, large and warm. “It won’t get better overnight. What you need now is time.”

Hamish glanced at his father, surprised. Robert McIntyre spoke little and was rarely openly affectionate. Hamish sighed. All his family and friends would be touched and changed in some way by his injury. He wasn’t sure if that comforted or disturbed him.

“Do you remember this road?” Eamon asked. “We’re not far from Kerikeri.”

“Yes. I could tell you how to get to town. But it looks different.” Buildings he didn’t recall lined the street, along with trees and landmarks he had no recollection of.

“It’s changed a lot over the last ten years,” Sarah said. “It’s not surprising it doesn’t look the same.”

Something flitted through Hamish’s memory like a bird in a loft. It happened all the time—brief glimpses of his life he couldn’t hang onto long enough to make sense of. But one name wouldn’t let him rest. “I keep meaning to ask you...who’s Rose?”

Again, everyone fell quiet, and he glanced around. His father had been watching him, but he turned back to the road as their eyes met. Sarah appeared startled. Eamon looked interested and said, “Do you remember her?”

“No.” Hamish frowned. “Only the name. I got the feeling...” He was about to say
We were close
, but he didn’t want to make a fool of himself when they revealed she was his old kindergarten teacher or something.

Sarah gave a ghost of a smile. “You met her last time you were home on leave.”

“Back in June, at a midwinter party.”

Hamish looked from her to Eamon and back again. “And...”

Eamon grinned. “Let’s just say I don’t think the two of you got out of bed for three weeks.”

“Oh.” Hamish was pretty sure he wasn’t a virgin, but he couldn’t honestly remember a single woman he’d been with. His heart raced at the thought that there had been a girl so close to his accident. “So what happened? Is she waiting for me?”

Eamon glanced at Sarah, whose expression softened. “I don’t think so, love,” she said. “You ended it. You didn’t tell us why, though.”

“Hmm.” The stab of disappointment surprised him. He turned back to the view. He’d known that no wife anticipated his return, but he’d hoped there might be someone pleased to see him come home. A girl to put her arms around him and keep him warm at night.

Then again, maybe it was for the best. He massaged his aching leg. What woman would be satisfied with half a man? He’d been active, fit, and healthy. His records stated he’d loved practically every sport under the sun—he’d played rugby, surfed, been a damn good athlete, a fast sprinter. He’d undergone rigorous training—none of which he could remember. This Rose, whoever she was, would have fallen for the soldier. She’d have no time for the shell of the man he’d become.

“Hamish?” His mother touched his arm. “Are you all right? I wish we’d said no to the party, but they all insisted... I’m so sorry.”

“It’s okay.” He’d known it was coming—meeting his old family and friends, answering the millions of questions about his leg and his memory. Best he get it over with so he could get on with his life.

“Nearly there,” his father said. He indicated at a roundabout Hamish was sure hadn’t been there before and headed toward town.

“I wonder whether seeing the house will help you remember,” Sarah said.

“Maybe.” Hamish doubted it though. His parents had apparently moved there only two years before.

She smiled. “Brandon will be pleased to see you.”

They’d told him about the boxer dog that lived with them while he was away. Hamish couldn’t remember getting him, but apparently when he was on leave they were inseparable. “I wonder if he’ll recognize me?”

“He goes nuts whenever you come home,” Eamon said. “He won’t have forgotten you, don’t worry.”

Robert slowed as they approached a turn-off for an estate new to Hamish, although the trees looked well-established and the sun had bleached the painted fences.

His father pulled up outside a large house surrounded by half an acre of land. Lilac-colored petals from the bordering jacaranda trees scattered the carefully tended lawn. Parked cars indicated the waiting welcoming party, and he sighed as Robert turned off the engine.

“I’ll get your crutches,” Eamon said, and he got out and retrieved them from the trunk. He brought them to Hamish and offered his hand. Hamish studied it for a moment. This was how it was going to be from now on—people offering him aid even though he was determined to manage on his own. He didn’t have the heart to refuse his brother, however, so he accepted Eamon’s hand.

At that moment, a brown blur appeared around the corner of the house and flew toward them. The boxer dog covered the grass in a matter of seconds, leapt up from the ground, and landed in Hamish’s arms. He fell backward onto the car seat, laughing as a warm, wet tongue washed his face. “You must be Brandon, I presume.”

Brandon replied with another huge lick.

“Yeuch.” He pushed the dog away, then stroked his ears and kissed the top of his head. “I know we were close, but sticking your tongue down my throat is taking it a step too far.”

Eamon hauled Brandon off. “Told you he’d remember you.”

Hamish got to his feet again. Eamon was tall, dark-haired, muscular, and good-looking in a rough, boy-next-door kind of way. Until recently, Hamish had had twenty pounds on his brother, but he’d lost weight since the accident, and he suspected they looked even more similar now.

“You okay?” Eamon frowned. “If this is too much for you, just say. We can get back in the car and I’ll take you over to the beach house.”

Hamish slipped his hands through the arm rests and steadied himself on the crutches. “Nah, I’m good. Let’s get it done.”

Eamon rested a hand on his shoulder. “It’s good to have you back, bro.”

It’s good to be back.
He repeated those words throughout the afternoon until they rang in his head. By six o’clock, he no longer had any sense of their meaning. He felt no relief at being home, because it wasn’t home—not a home he could remember, anyway. Although he appreciated everyone coming to welcome him, so many unfamiliar faces unsettled him. Luckily, Eamon remained at his side, reminding him who they were in a low murmur before they introduced themselves.

Thank God for Eamon
—four more words that circled in his head like a hamster on a wheel. His brother made sure a drink was always to hand, brought him a chair when his arms started to ache from steadying himself on the crutches, distracted those relatives who demanded too much of his attention, and eventually announced they were leaving when Hamish nearly dozed off in the middle of a conversation.